We had spent three days in Kashmir and had covered Gulmarg and Sonamarg. If you still haven’t read the previous posts then click here. Moving on, next day was our fourth day in Srinagar. According to the itinerary, we had to leave for Pahalgam. We woke up around 7:30 AM, had our breakfast, and were all set by 9:00 AM. Mr. Rouf was waiting for us on the other side of the lake. I was somewhere very excited to discover Pahalgam, but I wasn’t happy, as this was the last day in Kashmir. :( Anyway, I cheered up, and we were then taken by a shikara to the other side of the lake. 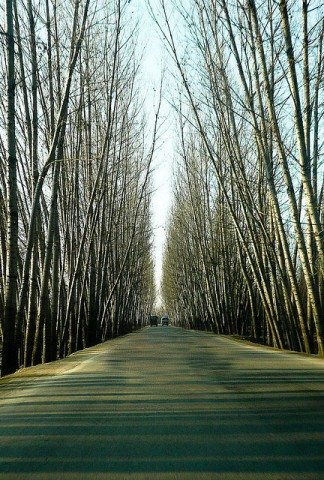 Mr. Rouf told us that Pahalgam is a town and a notified area committee in  Anantnag district. It is 76 kms from Srinagar and 55 kms from Anantnag. He also told us the on our way, we would pass through the Green Tunnel, Saffron Fields and shops. We had to buy some dry fruits and Saffron on the way. He also told us that Pahalgam is a world famous hill station located on the banks of river Lidder at an altitude of 7200 ft. and was once a humble shepherd’s village with breathtaking views.

Pahalgam is an ideal place for an adventure sports enthusiast. It offers wonderful treks, skiing, mountaineering and camping sites. Facilities for roller-skating, table tennis, badminton and cards are available at the Pahalgam Club. One can take a temporary membership at the Pahalgam natural golf course.

Some famous spots, which Pahalgam offers, are:

iii). Aru (11 km* : 2,408m) – This charming meadow can be reached by walking along a mountain path. The river Lidder disappears at Gur Khumb and reappears after 27 mts.

v). Betaab Valley: So called because the Hindi film Betaab was shot there.

( * The Distance mentioned is from Pahalgam.)

We had a decent speed and expected to reach the place in two and a half hours. We stopped by some shops to buy Dry fruits and Saffron. It is advisable to buy saffron from the shops next to the Saffron Fields. The shopkeeper told us that the world’s finest saffron grows here and the flowers of saffron are of violet color. He also told us that roughly 150 flowers together yield but 1 g and that’s the reason is it so costly. We bought a pack 5 grams, at the rate of Rs. 210 per gram. It was surprising to know that a gram of saffron has around 550-600 threads.

Me with Mr. Rouf

Moving on, we passed through the very beautiful Green Tunnel. It is said that the trees next to the road are lush green in the Summer Season. As of November they had shed their leaves. I made a video of the full tunnel. The way to Gulmarg, Sonamarg & Pahalgam (from Srinagar) are all different, so one gets a whole new experience each time he covers a place, though the way to Jammu & Pahalgam (from Srinagar) are the same. I was delighted to know that, because we’d get a chance to go through the Green Tunnel again. :)

Within some time, we had crossed Anantnag and I found out many Cricket bat shops. I had no interest in playing cricket now, though I played it when I was young (Many thanks to C.B.S.E and Indian Education System). We were near Pahalgam and I saw the rafting point. 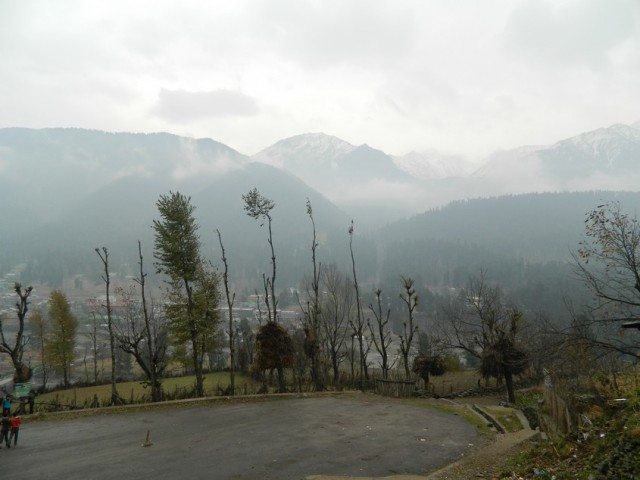 On the way to Pahalgam, one would come across Mamal Temple (Shiva). The small temple of Mamal is situated on the right bank of Lidder.

A House near the Temple

The temple is just 8 sq. ft. internally. It may well be that this temple is the name as that of (Mameswara) which the Rajtarangni mentions King Jayasiknba (AD 1128-1155) to have adorned with a golden Kalasa. The temple was externally covered with a thick coat of Lime Plaster. It contains an old Pedestal and Shiv Linga. A spring of remarkable pure water rises under the site of the temple. Its water is enclosed in a basin in front of Stairs.

I spotted a Cow near the temple. (Many thanks to her for the still pose) :) I also noticed some young Kashmiri boys playing Cricket. They had great enthusiasm and I watched an over (6 Balls).

We then proceeded toward the valley and in no time, we were in central Pahalgam.The place had shops, hotels and taxis all around. We also saw some parks, which reminded me of Lucknow and needless to mention “Mayawati”. :P With a smile on our face, we then moved on to have some meal.

We spotted a Punjabi restaurant, which was run by two Sardarji’s. They had come all the way from Amritsar to run the business. We ordered some paranthas and tea. Meanwhile, Sardarji gave us a Kangri (used to warm hands).

After some Punjabi Delight, We consulted Mr. Rouf, about what to do next. He advised us to go and checkout “Chandanwari“. Chandanwari was 16 Kms. from Pahalgam and it is the starting point of the Amarnath yatra that takes place every year in the month of Sawan (July to August). The road from Pahalgam to Chandanwari is on fairly flat terrain and can be undertaken by car. From Chandanwari onwards the track becomes much steeper, and is accessible on foot or by pony. About 11 kms from Chandanwari is the mountain lake of Sheshnag (3,574 m), after which, 13 kms away is the last stop, Panchtarni. The Amarnath cave is 6 kms away from there. During the month of Sawan, an ice stalagmite forms a natural shivling in the Amarnath cave, which waxes and wanes with the moon. We needed to book a taxi from the stand, as the other taxis were not allowed to go there. We went to the taxi stand and were allotted an Omni Van on payment of around Rs. 600 (I am not sure about the amount).

Anways, we set off for Chandanwari.What I was going to experience for the next two hours completely enthralled me. The roads were very narrow and could hardly accommodate 2 Nano’s side by side. They were very slippery and our driver never exceeded 20-25 Km/Hr.

In no time we were in Chandanwari. As soon as I steeped out, I was amazed to see the beautiful valley. It had Sheeshnag River on one side and mountains on the other. The river is captivating with its sheer force and clear waters. There were boards, which said “Welcome Yatries”. The place had a few tourists. It also had a small dhaba kind of restaurant. 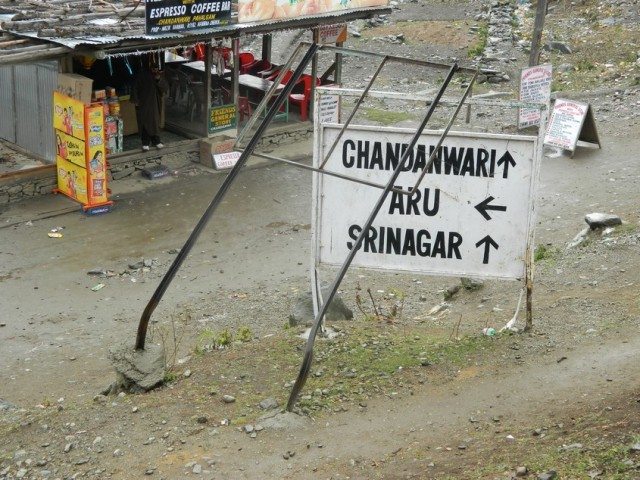 A Sign Board and a Cafe next to it 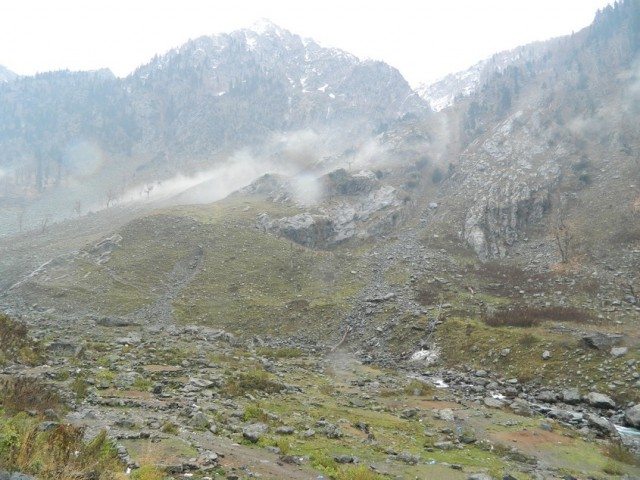 Amarnath Yatries go about 12-14 km. ahead, which takes 3-4 hours. From Chandanwari onwards the track becomes much steeper, and is accessible on foot or by a pony. Just 7 kms up on Pahalgham Chandanwari Road, is a beautiful valley of dreams known now as Betaab valley (Named after the movie Beetab, which was shot here). Recently, Rockstar (*ing Ranbir Kapoor) was also shot here.

We walked around the valley and sat for some time. As usual, I clicked some pics. After spending some time we decided to go back, as it was already 3:00 PM. On the way back to Pahalgam, we saw Patnitop (see pic.) 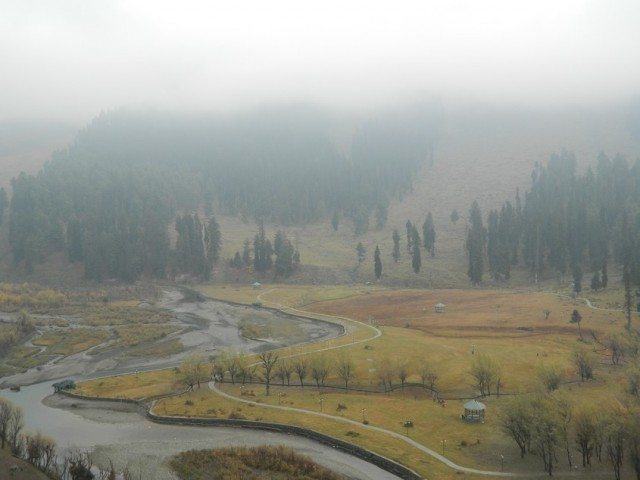 After returning to Pahalgam, we were to go back to Srinagar. Pahalgam has so much to offer that at least a week is needed to cover all the spots properly. Due to time constraints, we headed back to Srinagar. We passed through the Green Tunnel again. :) I found out many taxis with humorous thoughts that too with spellings incorrect. It was worse to see that an Ambulance has imprinted “Ambulence” :P.

After two and a half hours we entered Srinagar. As we had to go to Lal Chowk (the main market, like Connaught Place in Delhi & Hazratganj in Lucknow), so we asked Mr. Rouf to drop us there. On our way Mr. Rouf showed us the Srinagar Secretariat, which had two flags on it. Within a few minutes we were in Lal Chowk. The market was huge and I could see shops with labels “Reebok, Nike, Titan, HP” etc. We decided to eat something first and then we’ll explore the place. After some snacks and tea, we set out for shopping. Kashmiris demand high prices for every item as Kashmir faced a decline in Tourists, but the key point to remember is to bargain as much as possible. They drop their prices to about 50%, which is not surprising. 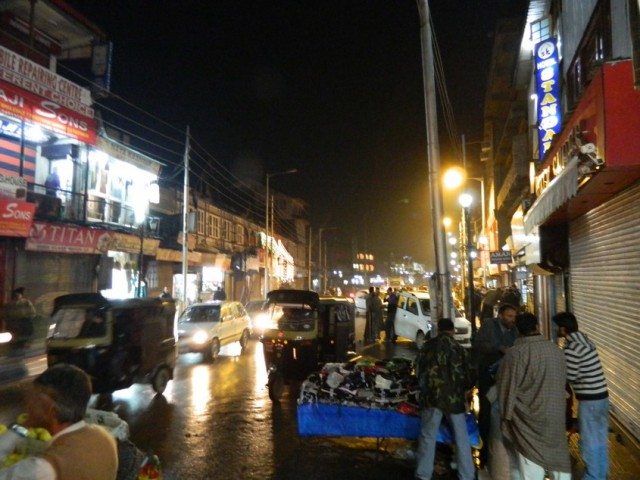 The Market in Lal Chowk

After some shopping, we took an auto and went back to Boulevard Road. With this it was end of the last day in Srinagar. I was so unhappy! Next day, we had to leave for Jammu. The journey was half done. So, I hope you all enjoyed reading yet another post in this series. Next, I’ll be writing about Jammu and Katra. Stay glued to Ghumakkar! :)

Here’s wishing all the readers a very happy and colorful Holi. :)

Pahalgam – The Valley Of Sheperds was last modified: October 28th, 2020 by Naman

We enjoyed a lot during our stay in IIM JOKA. After having yummy dinner in JOKA mess we explored the JOKA campus on foot. It was lush green area all. Campus is having 7 Lakes which symbolize seven of the most legendary professors of the institute.