Our group at office was looking to go out on a trip. As we usually do, we gathered around for a team meeting to list possible options and narrow down to a couple of them. An obvious constraint was the duration of the trip. We wanted to start on Friday evening and be back to work on Monday. This cuts down the options of possible destinations. The obvious destinations such as Nainital, Mussoorie and Jim Corbett National Park were ruled out. One of the team members came up with the suggestion of Kanatal. He had been to it a few months back and spoke very highly of the place and the picture he painted went down well with all of us.
Kanatal is near Dhanaulti and Chamba in Uttarakhand. The area is very scenic and the climate is quite cool. Many a times the hills are in the area are engulfed in clouds which adds to the beauty of the place. The place we chose to stay at is called Kanatal Camp http://www.kanatalcamp.com/index.html. The place is an adventure camp with provisions for adventure sports and trekking.

Now it came down to asking people to commit to the trip and handing in a deposit as a sure shot signal of their undying commitment. In all 22 persons (including few spouses and 2 children) signed up for the trip. The logistics in terms of place of stay and mode of travel were fixed by a couple of members. It was decided that we will leave office in a 30 seat bus late Friday night.

In order to ensure that everyone is there for the start in time we decided to organize the dinner at the office itself. The arrival of dinner was delayed due to a traffic jam in front of Shipra Mall. However the dinner proved to be sumptous. We were all set to leave at 11:30 from Sector 63 in NOIDA.
Kanatal is approx 290 KM from Delhi, and is near Dhanaulti and Chamba in Uttarakhand. The route is Muradnagar – Modi Nagar – Meerut – Khatauli – Muzaffarnagar – Roorkee – Hardiwar – Rishikesh -Narendranagar – Mohan Chhat – Chamba – Kanatal. The bus driver chose a circuitous route to reach Ghaziabad and we reached Delhi – Ghaziabad border at 1 am. However none of this dampened our spirits.

In order to settle in we started to play Antakshari. The game of Antakshari went on till around 3 am and then most of us started to prepare to sleep. Although it was the middle of May the air conditioning in the bus was at full blast and it was quite cold. My daughter seemed to be cozy in the shawl and seemed to be in dreamland. I searched for a jacket I was carrying to ward off the chill and then noticed that my wife was wearing the same and was already sleeping. It was surely inadvisable to wake her up so I also settled in and went off to sleep in a short span of time.
I woke up when we were just crossing Rishiskesh. We decided to take a tea break near Mohan Chhat around 8:30. As soon as we sighted a tap people lined up to freshen up. It was quite a sight to see everyone with toothbrushes in their hands. Having done with tea we set off again around 9:30. The drive continued at a steady pace and allowed us to absorb the scenery onroute.

On route to Kanatal -1

On route to Kanatal -2

We reached Kanatal camp at around 12:30. Although we originally expected to reach here early in the day no one was complaining. The camp is at a really picturesque place. The campsite had close to 20 tents. Each tent has a sleeping area consisting of two beds and an adjoining toilet. The accommodation is pretty basic and yet comfortable. 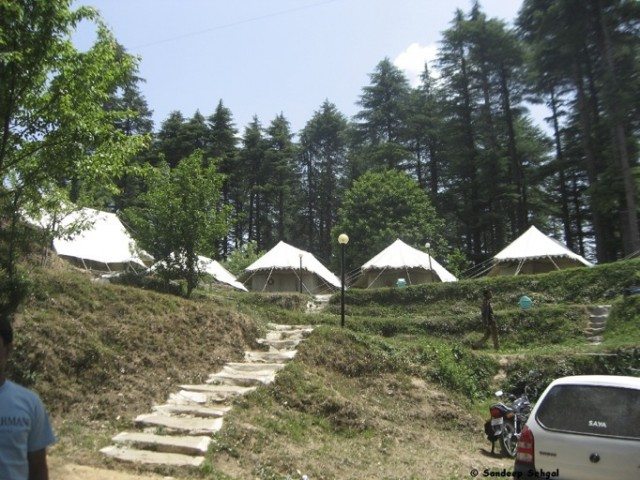 First view of the camp 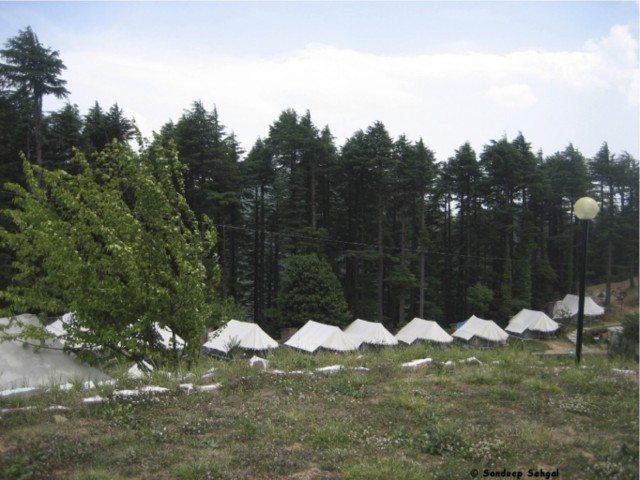 We quickly checked into the camps and decided to get back together for lunch around one. The modest serving of daal, subzi and roti proved to be delicious to the starved souls. The weather was extremely pleasant and we were ready for a short hike in the woods. 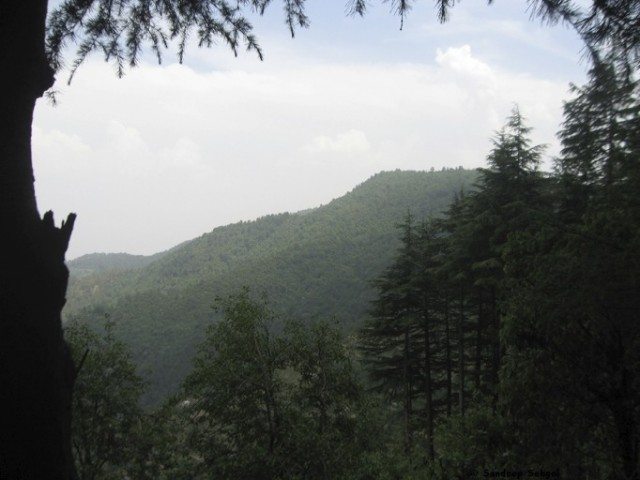 Area that we hiked to

This hike led us to an area where rock climbing and rappelling were organized. Both activities were great fun and there was bantering and joking whenever a person was not able to climb up or was not rappelling down. Amongst all this hullaboo an accident happened.

We were on a 8-10 feet mud track with the rock face on one side and a steep fall on the other side of the track. One of the kids in our group was playing. While running around the child fell and tumbled down the fall. The child’s landed onto bushes growing at the side of the mountain and the child was lying on the bushes. One of the instructors immediately went down with the help of a rope and carried the child back up. The child was in a state of shock and all of us were shaken up too. However the child was perfectly fine physically. We went over to a local doctor who examined the child and reconfirmed that the child was fine. All of us thanked almighty for the grace and agreed to be more cautious. Although shaken we wanted to move forward.
We were back in the camp by 5:30 and were raring to take up many other activities. There were a range of activities including Burma Bridge rope crossing, a ropes course, and a range of sports including football, cricket, volleyball, etc. 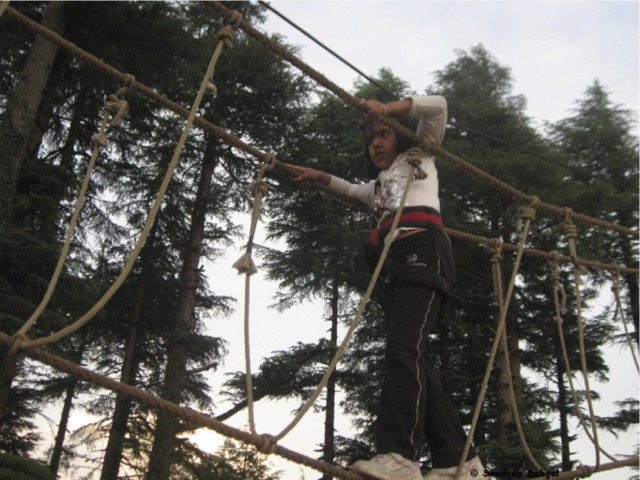 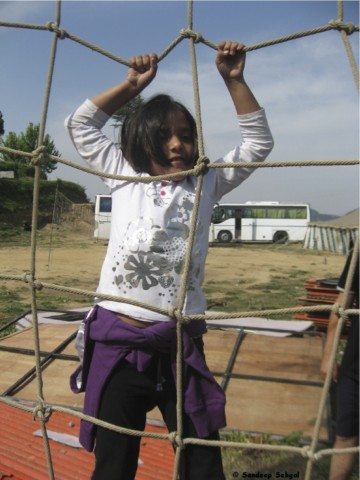 We chose to go in for volleyball and very quickly two teams were striving hard against each other. The hard fought games continued for the next couple of hours. 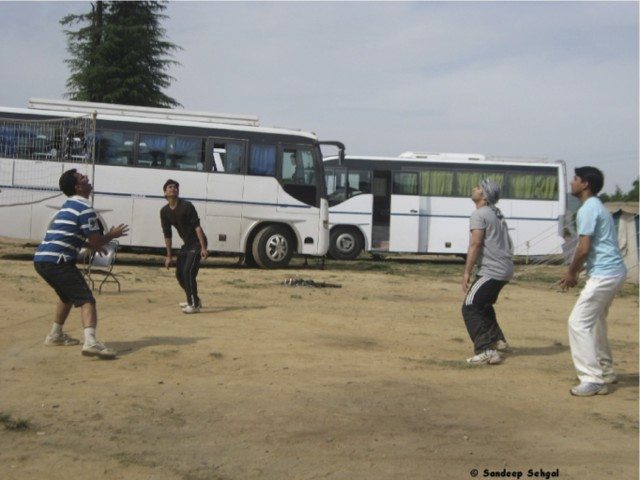 Around 8:30 or so it was bonfire time. Arrangements for snacks had already been made and we were carrying our supplies of beverages. We had a jolly good time around the bonfire with Antakshari, a bit of shaiyaari. The musical talent of a couple of individuals was a revelation, when shouts of once more followed when they completed their songs. 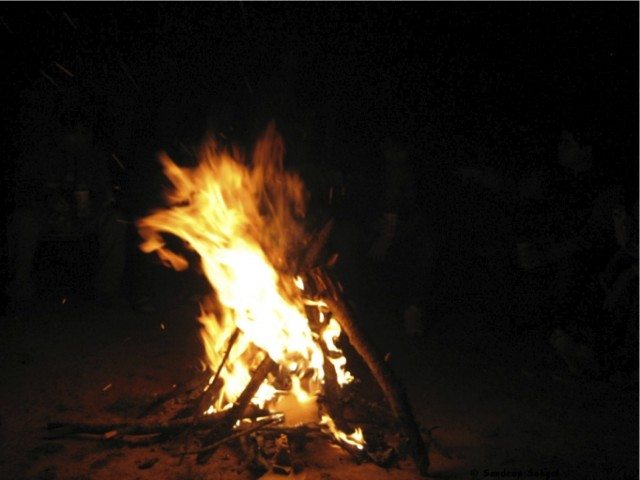 The effects of the extra long hours of the night before and the strenuous activities of the day gradually began to take their toll. We decided to go in for dinner around 11:30. The buffet dinner was very delicious and was well enjoyed. The options for the next day were either to go in for a mountain hike or to partake in more sports. A decision between the two could not be made and we agreed to take a call on this early next morning.
I woke up around 7:30 and expected that others would be up too. This proved to be wishful and the “early risers” got out of the tents around 9. The option to hike was dismissed and we decided to go in for more of Volleyball. The game was highly competitive with the usual banter. We took a short break for breakfast and played for around 3 hours. The time to leave for Delhi was drawing close. After freshening up we boarded the bus around 1 pm.
The bus winded down the mountain road. We stopped by for a late lunch close to Haridwar. The fun and games continued till we reached back around 11 pm. With the resolve to go on another fun trip soon everyone departed for their respective homes.
Thanks and Cheers! :)

Our Trip to Kanatal, Uttrakhand was last modified: October 20th, 2020 by Sandeep Sehgal

I am relearning the wonders of travelling again. I traveled extensively as a child with my parents, then somehow traveling took a backseat for a long time. I rediscovered the pleasures of traveling with my wife and daughter a couple of years back. I have traveled a lot to hill and mountain destinations in India, and have been to UK, US, Japan and Canada more than a few times. Also, I have been to Greece, Dubai and Thailand once each. Hoping to travel to many other places...

I just got back from the famous Delhi- manali-keylong-leh–kargil-dras-zozila-srinagar-patnitop-delhi highway and the writeup from bikerdude is really gr8. Atleast for me it would have…