Our plan for today was to go watch a world cup match, England vs. Slovakia, in a pub with aman and naturally, a lot of other England supporters. We had wanted to watch a world cup match of England in a pub since we had arrived, you know, to experience the atmosphere.
First we had planned on going to a pub in Old street for the match, but then we changed our plan to go to a pub in Angel. Aman and Liz had looked around quite a bit to find a pub that would allow a 12 year old. I was quite excited to go to the Angel tube station, because I had read somewhere that the longest escalator in England (27 meters) was in that tube station☺. 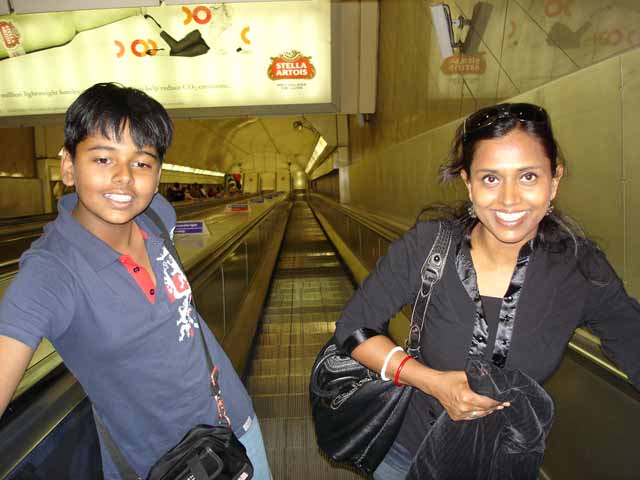 We left for the pub at around 2 o’ clock. We reached the Angel tube station after about 30 minutes by tube. When we were getting out of the tube I was quite eager to see that escalator, we first encountered about three small ones, before seeing that MASSIVE escalator!! You couldn’t even see the top of the escalator standing at the bottom of it! It took us about a two minute ride to get to the top of the escalator!!
The pub that we were going to was a little far from the station, but we managed the ‘5 minute’ walk :P. There were pubs, lots of pubs, lined up on the road to the pub that we were going to. People were saying best of luck to each other before the match on the street and in the pubs. 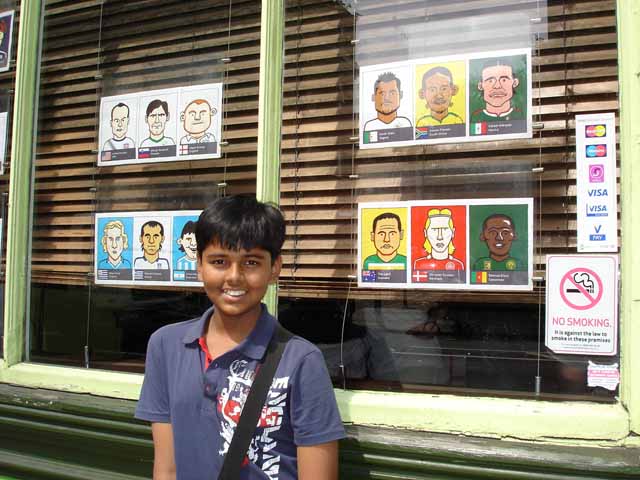 The pub that we were going to was called ‘Offside’ (although everyone hoped there were to be none today). It was a nice type of place, with a few chairs, tables and sofas. There were ceiling fans too – now that was a rare sight in London. There were big projectors and a white pull down screen on which they were going to telecast the match. We reached it just about five minutes before the match. Aman had reserved seats for us, if he wouldn’t have, then we would have had to probably stand! The pub was FULL!!!!!! I guess that would be because it was England’s final group stage world cup match and if they were to qualify to the knockout stages of the tournament, they had to win this game. The people were out there to support their team; because this was the time they needed it the most. 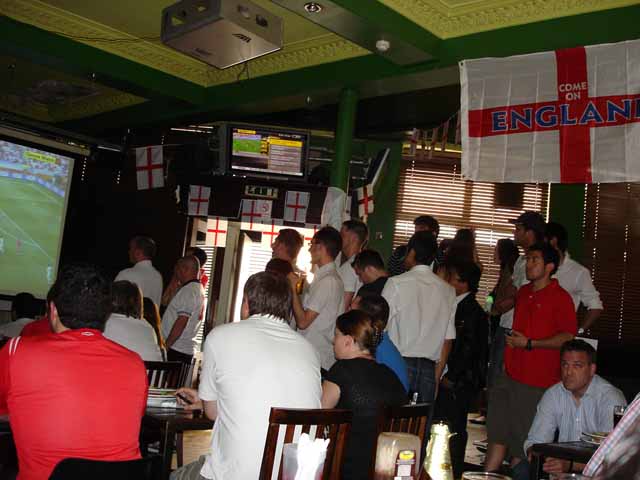 Inside ‘Offside’ – All set for the match

We made ourselves comfortable in our sofas with a beverage, just in time for the match. The first quarter of the game was a little bit frustrating, because England weren’t showing enough intent to attack, but on the 22nd minute, Jermain Defoe of Tottenham Hotspurs’ provided the breakthrough for England! They were 1-0 up and looking straight at a match with the United States of America or mighty Germany!!!!!!!!!! The whole pub erupted into cheers!!!!! I went wild celebrating with my dad, Aman, and some people who were sitting next to us!!!!!!!!! 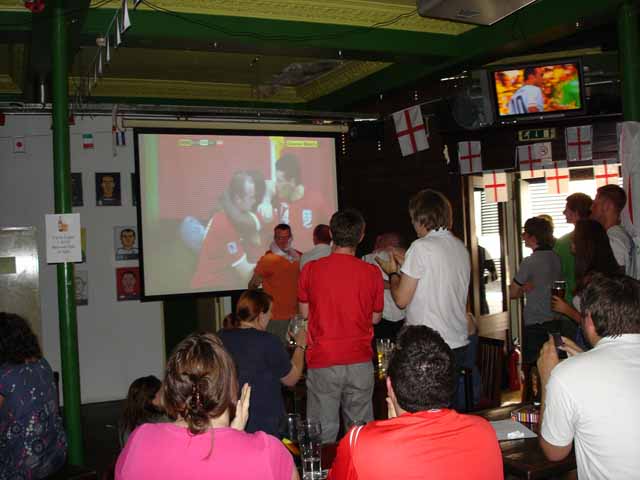 The final whistle blew and match ended 1-0. The whole pub (and probably the whole of England) sighed in relief!! Simultaneously the match featuring the USA also ended and now it was a done deal, England were to face Germany in the first knockout stage of the World Cup 2010 South Africa.

Jubilant English fans, after the win

We celebrated the win with some other fans in the pub and then carried on to get something to eat. Aman suggested we go to a place along the coast of the river Thames called E.A.T. to grab a bite. We took the tube to Westminster and then walked down the beautiful South Bank, crossing the London Eye and all☺. 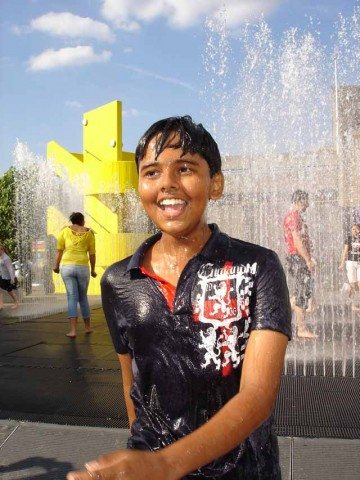 There was a flat square fountain which we crossed on our way. It had small shower holes on the floor, from where the water was coming out. It was divided into four sections, and at any given time, only 3 sections had the water showers running. That meant there was one section without any water coming out, and you could run to the centre of that square without getting wet☺. This square changed almost every 5-10 seconds. So, as a person with a different approach, while everyone else was running into the dry squares (as and when they came up), I ran straight into the square with running water!! Thankfully it was sunny, and I dried up after some time. 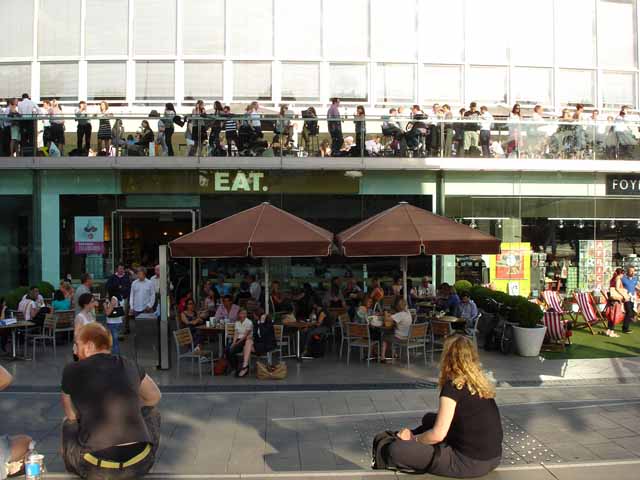 We decided to get eat something English so all of us took a small pie each. I took the shepherds pie, which was basically a little gravy and meat pieces enveloped inside a patty-like crust. I made the mistake of starting from the side of the pie, when what I should have done was start from the centre. The meaty gravy in the pie started coming out from the side, but I still managed to finish it without it getting very messy. 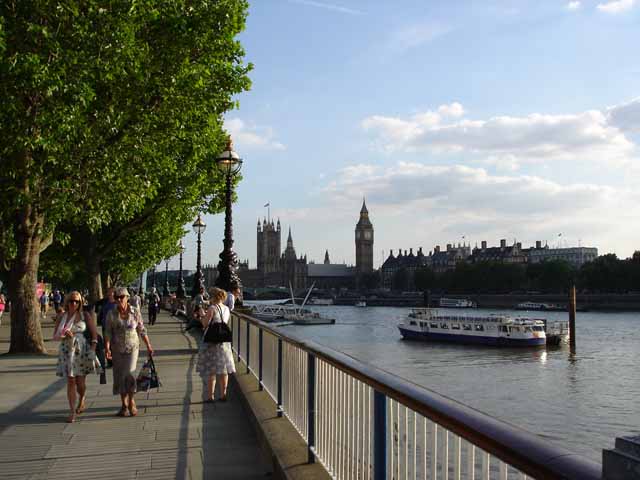 After that we took a peaceful and beautiful walk back to the Waterloo tube station. 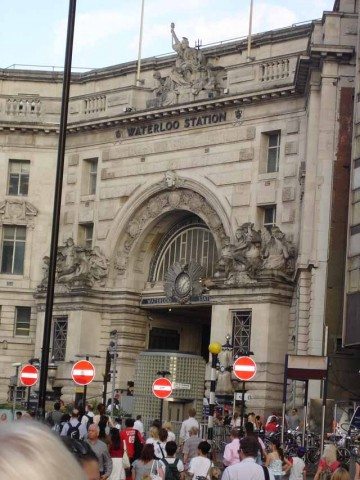 We reached home and as usual, watched a re-run episode of Who wants to be a Millionaire, before going to sleep and ending a long, nice and one of my last days in London ☹

When I received an invitation to attend ‘Lavasa Women’s Drive’ event and review the Lavasa experience, I took it as an opportunity to celebrate…