Ever since my arrival in the UK, I was dying to get to Scotland. Many of my friends had recommended the place for its ethereal beauty. Moreover, it was the land of Sir William Wallace, Braveheart, who in my mind was still a very handsome Mel Gibson (love him or hate him but he did look good in the movie). So when Hannah suggested a trip to Edinburgh, I had to go. Apart from Hannah and Me, there was Kelsey and two guys Sam and Stuart. Sam bowed out at the last moment but Stuart soldiered on. We booked a hotel and took a morning train from Newcastle to Edinburgh. The train was a whole 10 minutes late, which was apparently unacceptable and all three of my fellow travellers were fuming while I was wondering what the whole fuss was about. But then I’ve been fortunate enough to go through a lot of character building (as Nandan would call it) at the hands of the Great Indian Railway. 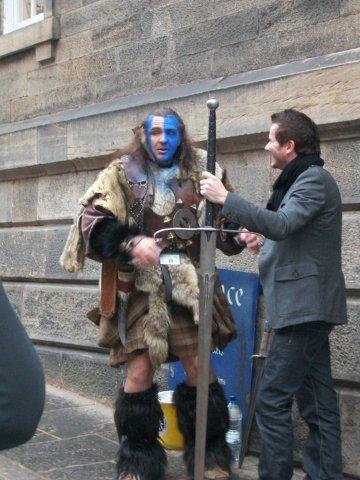 Newcastle is towards the north-east of England so it is almost (not-so-quite by UK standards) bordering on Scotland. Never-the-less, I was amazed at the drastic change of scenery after crossing Berwick-upon-tweed which is the last English town in Northumberland County before you enter Scotland. Throughout the route, the sea is almost constantly in sight over the right with quaint lighthouses popping up every now and then. But on the left, once you enter Scotland, for as far as you can see, lush green fields sprawl without any signs of human activity. Unspoilt, Unbelievable.

The distance between Newcastle and Edinburgh is a little over 100 kms. So on train, it took just over an hour to get the there. Anyways, the first thing we noticed as soon as we got out of the railway station were Kilts. There were men in tartan skirts at almost every corner playing the shrill highland bagpipes. I have some strong opinions about men wearing skirts, but I’ll keep them to myself and will just say that there must’ve been a good reason why they went out of fashion. Somewhere around here, someone handed Kelsey a ‘Yes!’ sign for reasons unknown. That ‘Yes!’ sign is very important. Watch out for it.

The Scott Monument on Princess Street

Man in Tartan Skirt - We saw some live ones too

Since there was still a lot of time before we would be able to check-in at our hotel, we decided to cross over the Waverly Bridge to get to the Edinburgh Castle in the Old Town on foot with our entire luggage. We chanced upon a dungeon immediately upon crossing the Waverly Bridge. It apparently had a ride running through it spiced up by several actors dressed in macabre outfits to scare people. Stuart wanted to go but the three of us were not too keen majorly for two reasons- it was expensive and none of us are too fond of rides. I think we kind of bullied Stuart into not going. No wonder he has refused to go with us on any other trip after that.

The castle sits at the top of the Royal Mile overlooking the entire town of Edinburgh. The Royal mile is the biggest tourist street in the Old Town. And it is uphill with almost vertical incline at places. At least it did seem that way with a heavy backpack on my shoulders. However, the walk was a visual treat because as soon as you enter the Old Town you cannot ignore history. I love old buildings. Be it forts in India or the castles in the UK, I am a nerd about dark dungeons and mysterious corridors that have not been spoilt by an attempt to recreate the old times. I detest it when I walk into a castle and there are mannequins dressed up as people would have dressed in old times and some actors pretending to be the servants. It leaves nothing to imagination. Fortunately, most of the the forts in India are unspoilt in this regard. To come back to the point, here on the Royal Mile, there were beautiful, old buildings though still very much in use on both the sides. Yes! 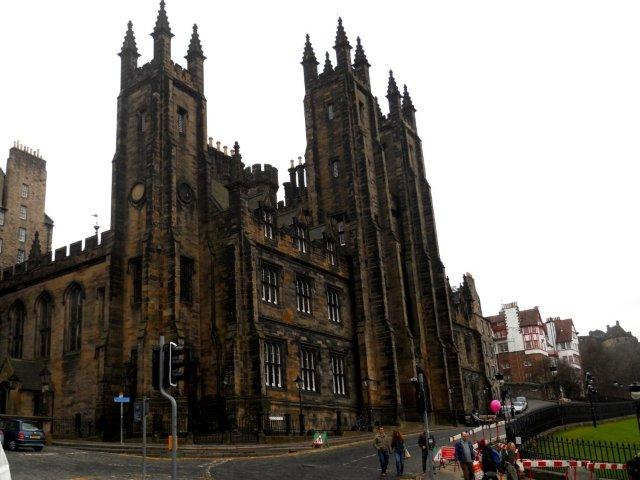 A Pretty Building in the Old Town

Anyways, we trekked all the way up the historical Royal Mile to the Castle only to find it swarming with tourists. When after sucking us into a souvenir shop, the river of tourists carried us through the shop at lightning speed and spat us out without giving us a chance to look around, the smarter amongst us (hint – not me!) took a hard decision. We would have to come back to the castle early next morning. Our legs hated us for this, but judging by the length of the snakey queue at the Ticket counter, it didn’t look as if we’d be able to get in anyways. So we walked back in search of other things to amuse us. It was also around this time that Stuart used his mobile phone and a ‘grown-up’ voice to book us a place each in the Ghost Tour at night.

Statue of Robert the Bruce outside the Edinburgh Castle 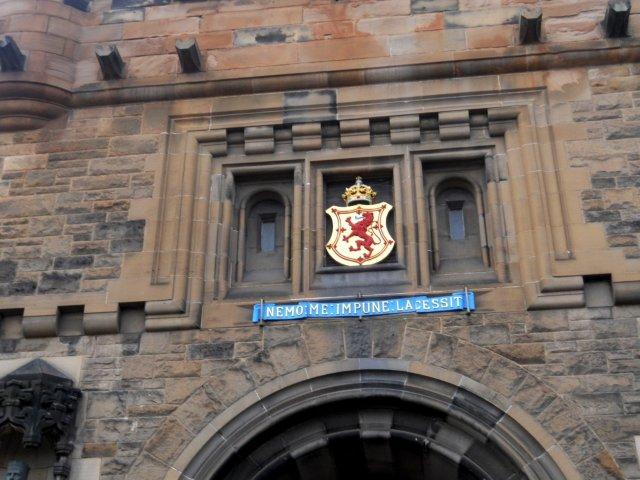 We strolled around and chanced upon a museum with free entry. Yes! It was a little way off the Royal Mile and was called the National Museum of Scotland. One thing I would like to say about the museums in the UK is that most of them are very well organized and rewarding. You can spend some quality time in them and come out feeling enriched. But it’s better to space them out else museums can seem repetitive. 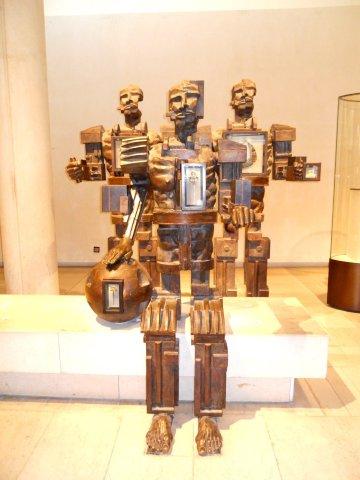 Weird Sculpture inside the National Museum of Scotland 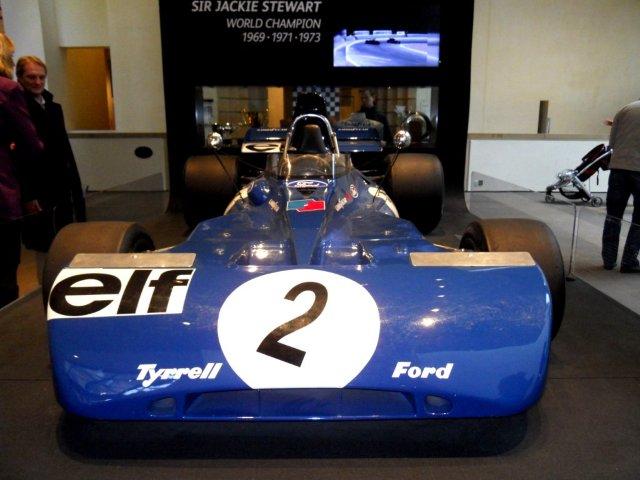 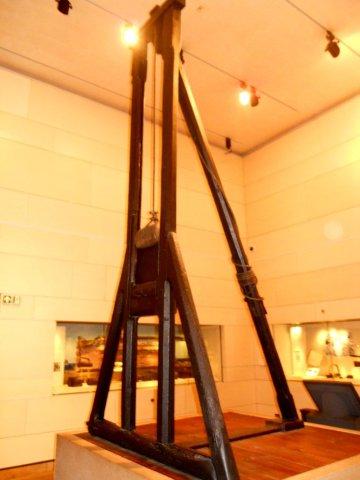 A Contraption to Behead People (Charming!) inside the museum.

We spent a little more than an hour at the museum and then went out in search of the Scottish Parliament. It was supposed to be a big deal. So we walked across to the other end of the Royal Mile where the Parliament was supposed to be. However, it turned out to be elusive. With great difficulty and just short of killing Kelsey (who was supposed to know where it was), we stumbled upon it. The building on the outside was modern which to me is like a blot on the World Heritage Site of Edinburgh. And on the inside, well you can see it for yourself. 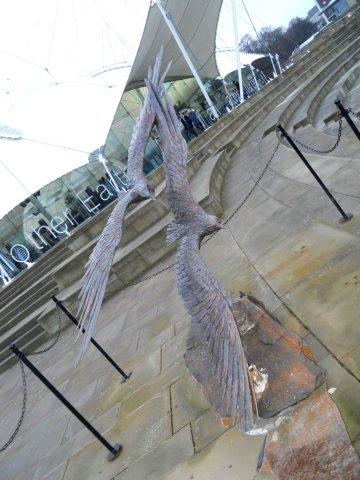 The Good Earth - On the way to Scottish Parliament 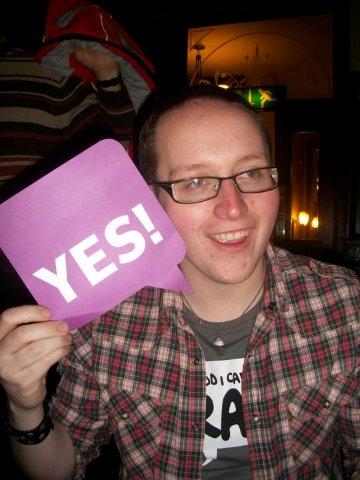 Fortunately we didn’t have to climb back up the Royal Mile because it was time to go back to the Hotel. Yes! We called a cab and were on our way to relieve ourselves of our killer luggage. Apparently the cab driver was in no hurry to let us do that. He seemed to have no idea where the hotel was. He overshot it by at least two miles before turning back and missing it again. Fortunately, this time we were alert and managed to stop him in time. We did end up paying at least a couple of pounds extra but we were relieved to see that the hotel did exist.

And that is when weirdness started. But you’ll have to wait till the next part to find out why none of us can ever forget that hotel or whether we did spot a ghost during the ghost tour. A big and important city like Edinburgh deserves more than one post. Till the next time.