A visit to Datia was originally not in my original itinerary. While chit-chatting with a small group of travellers at Man Mandir, they described this beautiful palace in Datia that they had just returned from.

So on my way to Orchha, about 75 kms away from Gwalior on the border of UP (Jhansi being only 25 kms away), I had my taxi stop at Datia and was glad I did that. 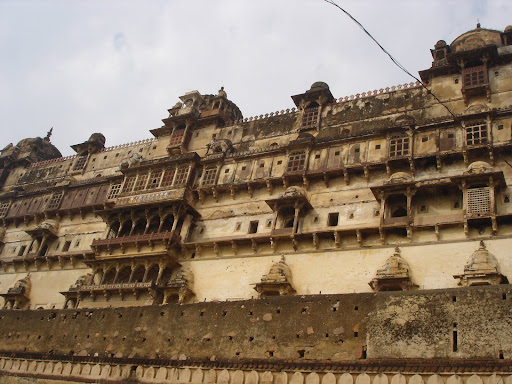 The main attraction of Datia town is the captivating Datia Palace, locally called Govind Mahal (or Govind Mandir) and popularly called the Jehangir Mahal (Palace). It is overlooking the Karna Sagar Lake. 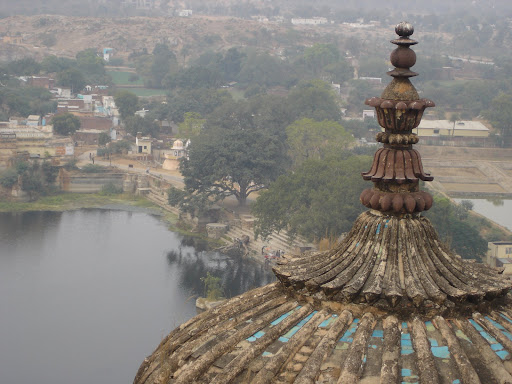 Akbar captured Orchha in 1604 and deposed Raja Ram Chand, Bir Singh’s eldest brother. It is said that Bir Singh, an errant chieftain himself, beheaded Abul Fazl (Akbar’s vizier, confidant and general) and sent his head to Salim (a young Jehangir). It is also alleged that this was done at the prompting of Jehangir, who in his memoirs declared that it was Abul Fazl who had abused Akbar’s mind so that he turned away his love for his son. I could not verify through historical accounts how much of this is a fact. Anyway, tormented at Fazl’s death and to challenge Bir Singh’s audacity, Akbar tried to have Bir Singh captured. Bir Singh teamed up with Jehangir, who by then was rebelling against his own father. Bir Singh and Jehangir apparently shared some anxious moments before either of them ascended the throne.

To make it more interesting, when Jehangir was imprisoned on his way to Kabul by one of his own generals, Mahabat Khan, it is alleged that Bir Singh’s youngest son, Bhagwan Rao, came to his rescue and liberated him. As a token of gratitude, when Jehangir ascended the throne, he made Bir Singh Deo the ruler of Orchha. 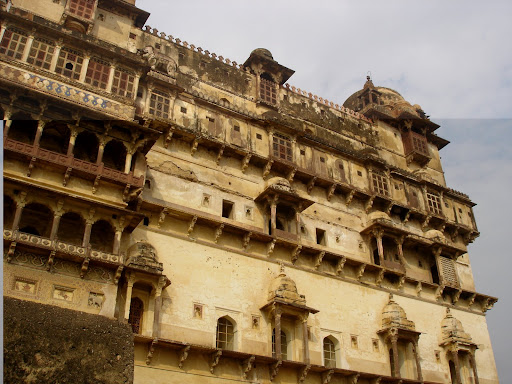 In return, Bir Singh Deo built the grand Datia Palace in honour of Jehangir. Now that we know the story, we should not be surprised why a palace in the middle of the land of Bundelas is called Jehangir Palace.

So, we see that the Bundelkhand rulers of the seventeenth century were closely connected to the life and times of the Mughal emperors. That is probably why the Datia Palace, that was originally called Govind Mahal or Govind Mandir got popular with the name, Jehangir Palace.

I found a guide who also is the caretaker of the Datia Palace. He was kind and helpful, and it was interesting to hear all that he had to say about the Palace. 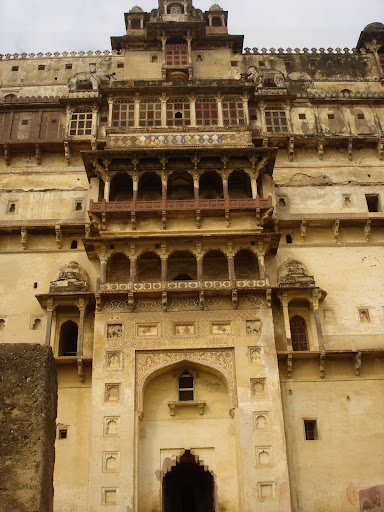 As the main entrance is on the eastern side, the sun was beating down on the front portion of the Palace as I approached it. It is presumed that the Palace is built on the exact spot where Bir Singh Deo and Jehangir first met.

The Datia Palace was built on top of the Datia hillock in 1614. The Palace consists of seven levels, two of which are underground and has more than 440 rooms and several courtyards. The guide said it was built in the shape of a swastika but I could not really figure that out from the limited view I could get. It was easy to feel delightfully lost in the hundreds of passages while darting from one room to the other.

The Palace is made entirely of stones and bricks. It has a ribbed dome over which is a shikar (spire) with lotus petal design. The arched openings, brackets and dome is characteristic of the Mughal architecture, while the lotus petals and use of animal sculpture and avian painting are symbols of the Rajput architecture. The blend of the Mughal and Rajput architecture forms a typical feature of the Bundela style of architecture at the Datia Palace. It gave me an impression that the Bundela kings were favorably inclined towards the Mughals at least as far as the Datia Palace is concerned. 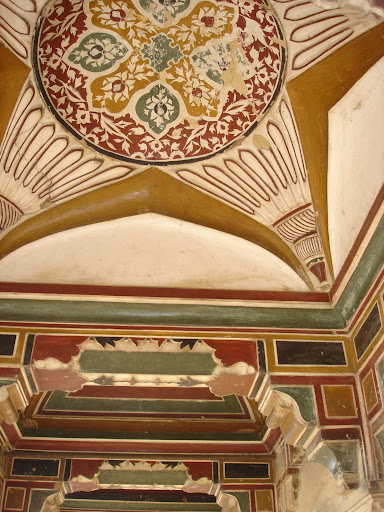 The halls have an embellished finish and some fine paintings. 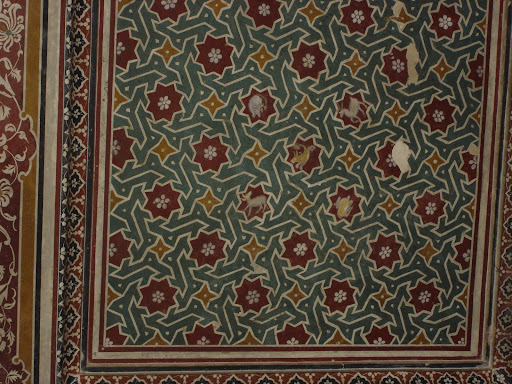 Ceilings are intricately decorated. These murals seem to have somehow withstood the test of time. 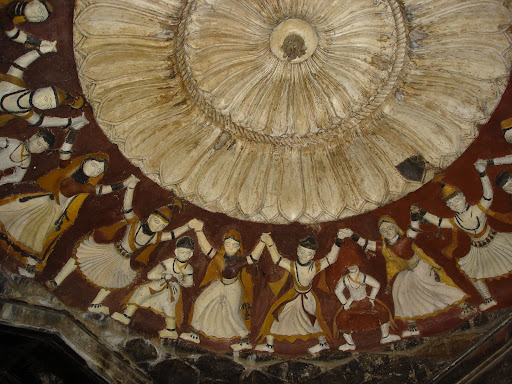 The windows have beautiful stone lattice work. The guide informed that some repair work on those has been done by workmen brought in from Jaipur. 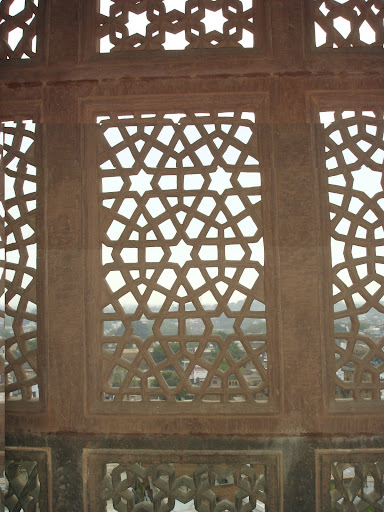 Certain places present a beautiful play of light and shade as can be seen in these pictures. 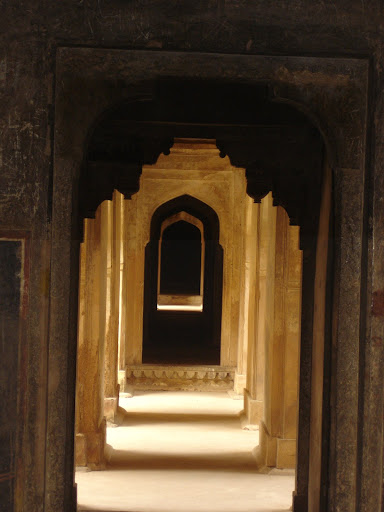 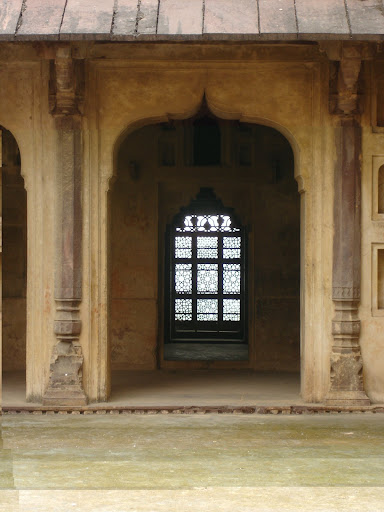 Strangely, this beautiful Palace is considered unique for it has never been used as a residence by King Bir Singh Deo or his descendants. It is interesting to read a few references to some refugees who are said to have been housed in this Palace for many years. 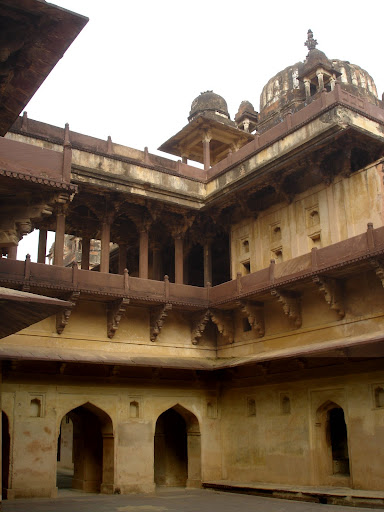 I found the view from the terrace particularly charming with the scenery dotted with temples and cenotaphs, and spent some time relaxing there with the cool breeze blowing on my face. Coming out, I had another good look at the Palace. It was hard to believe that this Palace was of the seventeenth century. Gazing at it for a while, I felt as if time had stopped. The Datia Palace of the seventeeth century has indeed well resisted the onslaught of time. 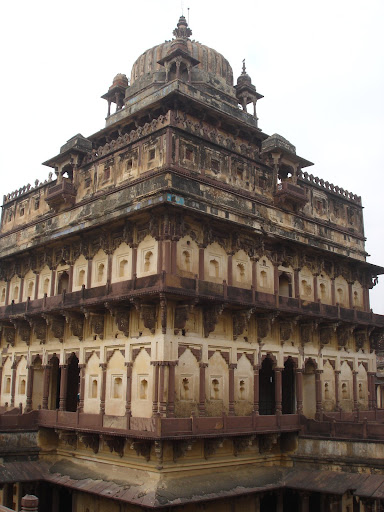 Datia can be approached by road from Jhansi in Uttar Pradesh or from Gwalior in Madhya Pradesh. Datia is on the Delhi-Mumbai railway line.

Of Bundelas and Mughals, Palace of Datia was last modified: July 14th, 2019 by Celine