We were looking at options to celebrate our marriage anniversary and zeroed in on Wayanad. We were warned of the Kerala rains, but then we wanted the rains and it turned out to be real good. The two and a half days we spent there, the weather was picture perfect- occasional showers and the clouds and mist playing hide and seek in the romantic sense.

The Bangalore-Wayanad route(300kms) is really simple and as usual we drove covering Mysore-Nanjungad-Gundlupet-Sultan Batherry- Kalpetta, essentially the NH212. Kalpetta is the district headquarters of Wayanad. We started on a Saturday morning from Bangalore at 8 am and at 60 kms pulled over into Kamat’s Lokruchi for breakfast. This place as expected was crowded, but the service is very fast. The food is excellent here and I strongly recommend it. In case you miss it, there is Barista on your left about 10 kms from Kamat’s and if you miss this one also then you have Coffee Day I can’t imagine anyone missing all the three. Once near to Mysore ask for directions to Nanjungad. This route skirts the periphery of Mysore. From Nanjungad it is straight to Gundlupet. At Gundlupet take a right and keep on going straight till Kalpetta passing through Sultan Batherry.

We reached Kalpetta at 2 pm and checked into GreenGates hotel right at the entrance of the town. Nice hotel on a hillock. It has a mix of rooms and cottages and the staff is very courteous. After lunch, we drove to Pookat Lake( 16 kms from Kalpetta) and it rained. The lake is clean and the view is magnificent, fringed by hills. The rains stopped and we took a walk along the bank of the lake. After spending some time admiring the views and soaking in the tranquility, we did the customary shopping of nick-nacks of local stuff. Boating option is available there, though we did not go for it. 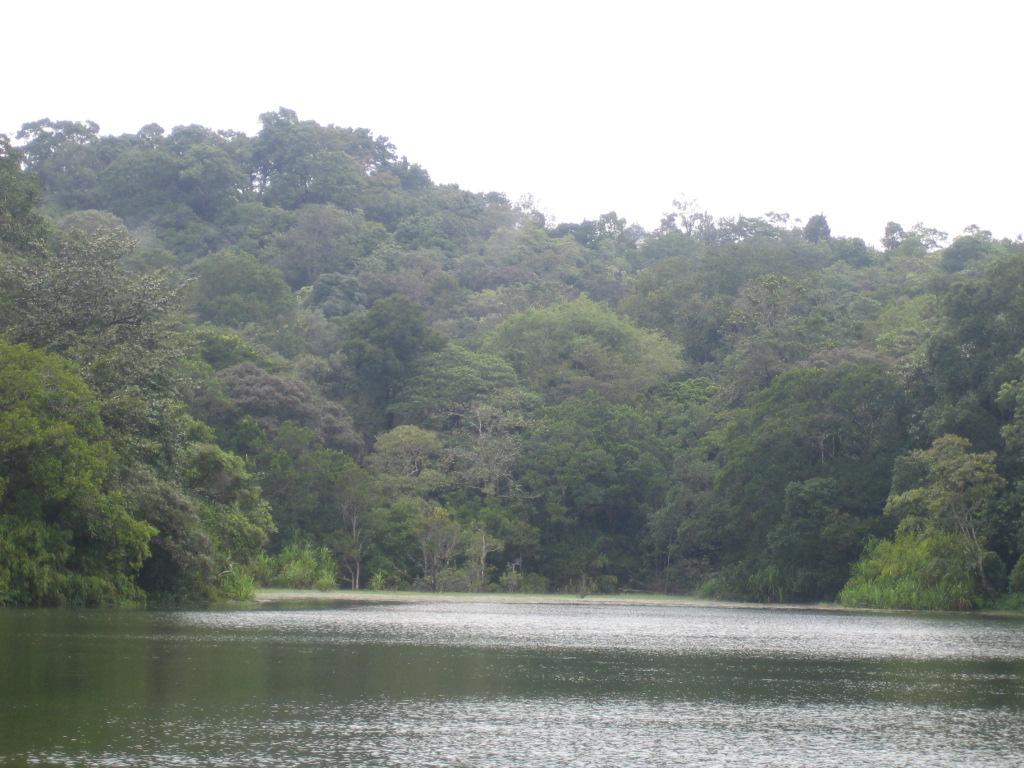 Time to move on to next spot- Lakidi view point ( 10 kms). It is near Vythiri on the Calicut highway. The view was breathtaking. While coming back, we stopped at a tree. Yes, a tree by the side of the road and called the Chain tree. There is story to it. Some 200 years ago, the British wanted to build a road from Calicut to Wayanad, but did not know the route. A tribal helped them with the route. In order that the tribal does not get credit, they shot him dead. This part of the story is a fact. Now starts the folklore – apparently later on many accidents happened on this road. A local priest proclaimed that it is the restless aatma ( ghost) of the tribal which is causing the accidents. The priest brought the ghost under his control and chained it to the tree. Now what we see is a tree with chains hanging from it and fixed in the ground. There is small structure at the base of the tree where an oil lamp is lighted everyday. By this time it was already around 6 pm and we headed back to the hotel. 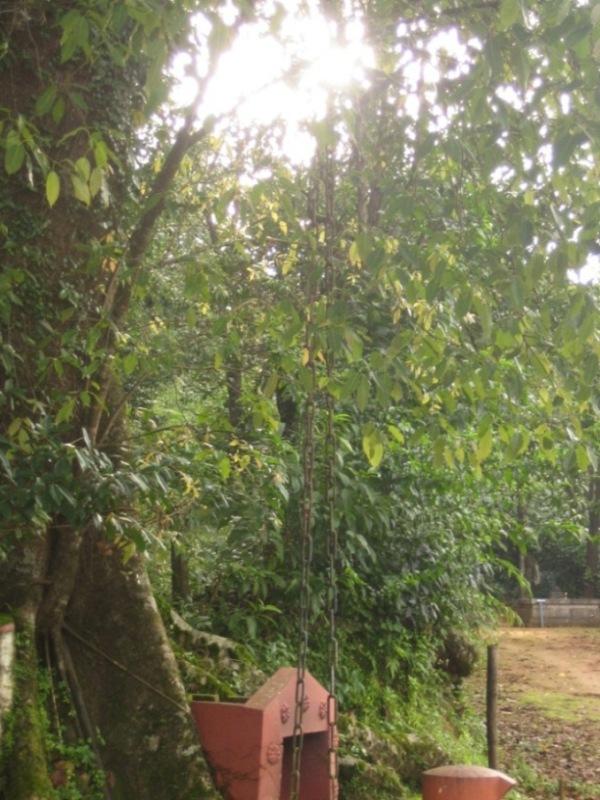 It was our marriage anniversary and the hotel staff had prepared a nice cake and arranged a candle-lit dinner for us on a tree-house sort of structure. The food was good and so was the ambience. 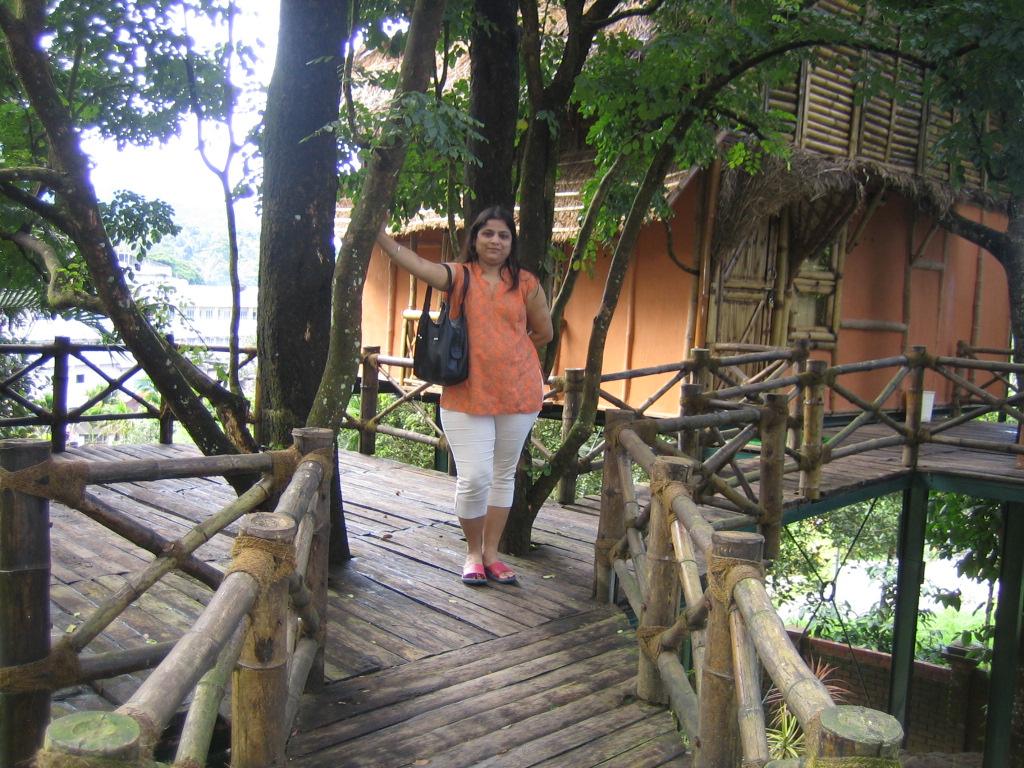 The next day we started after breakfast and headed to the Soochipura falls( 23kms) At the end of Kalpetta town, take the Ooty route till Meepadi (10 kms). This route is full of tea gardens and the sights are magnificent. 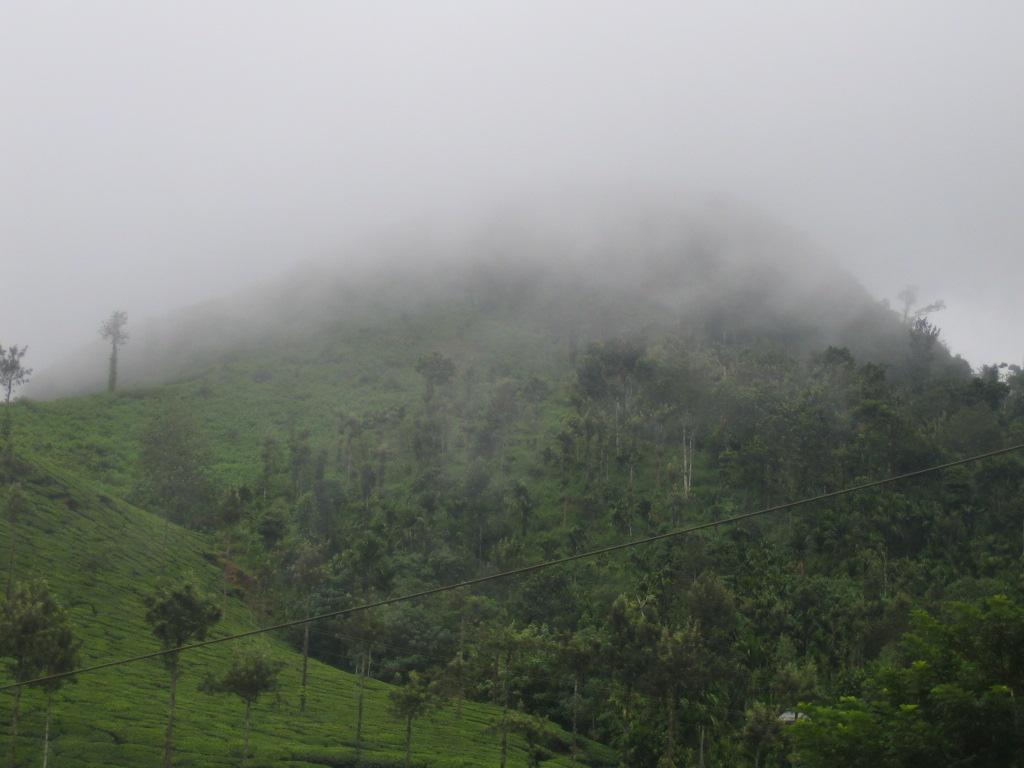 Within Meepadi, there is small junction and here you take a right. Well, we missed it and were wondering where the right turn is. Some locals helped us with the directions and we were back on track. Another 13 kms and we reached the parking lot of the falls. From here it is about 2 kms to the falls. There is a jeep service ( Rs.50/head) till 1.5 kms and after that you have to walk. We decided to walk anyway and a good decision. The clouds decided to come down on the mountain and we were walking through it in the jungle. As we neared, we could hear the roar of the falls. The last half a km walk was simply fantastic through narrow path in the forest leading to the bas of the falls. Suddenly, the falls came in view in full glory with water coming down with a thunderous roar. 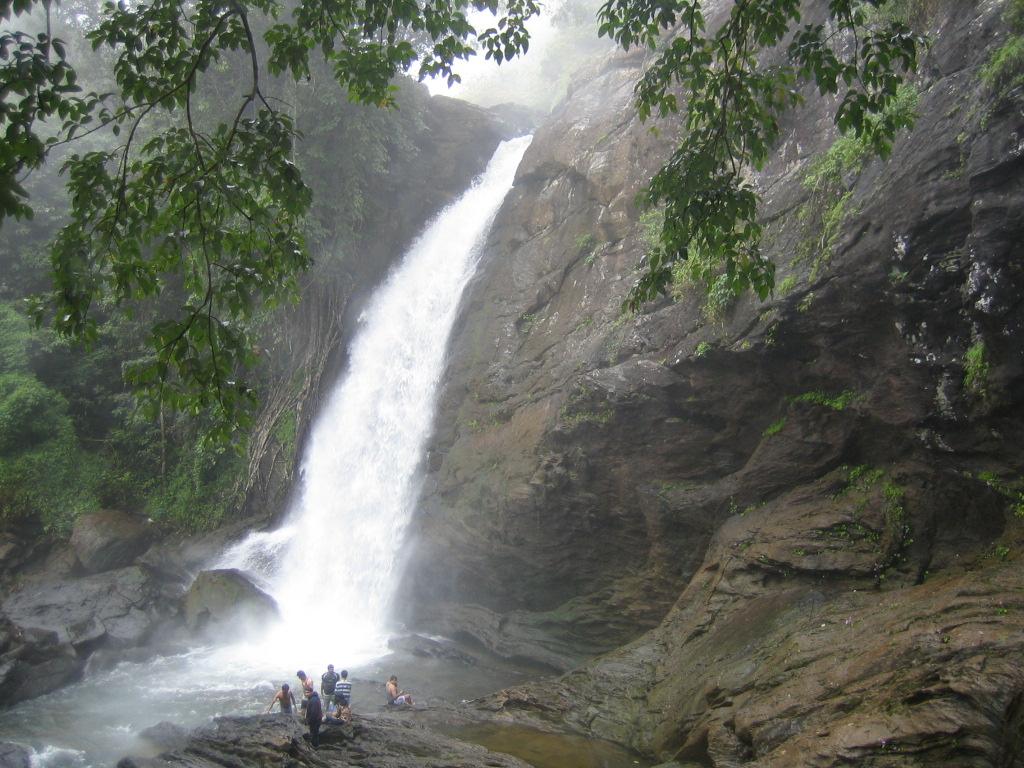 The force of the water is such that even while standing some distance away, we got drenched with the spray. After some photography, we headed towards the base of the falls and what an experience it was ! We spent about an hour there and there was not much of a crowd fortunately. From the falls you can go to Banasura sagar dam directly through a different route. But we decided to head back to Kalpetta for a sumptuous non-veg lunch in Hotel Woodlands. Highly recommended for folks who like fish.

After lunch, we headed towards Bansura sagar dam ( 20 kms). The road is good. Once you have parked your vehicle, you can either hire a jeep or walk. We preferred to walk the half a km to to the dam and then about 850 metres along the dam boulevard. Anyway it was cloudy with a lovely breeze. What a view we were treated to once we were on the boulevard. It was simply captivating. The reservoir has a number of islands. Towards the end there are rocks where you can sit next to the waters. We spent about an hour there just taking in the view. Speed boating is available here. This is an earthen dam(largest in India) with a length of 850 metres which takes in water from the Karamanathodu tributary of Kabini river. It supports a hydro-electric project. 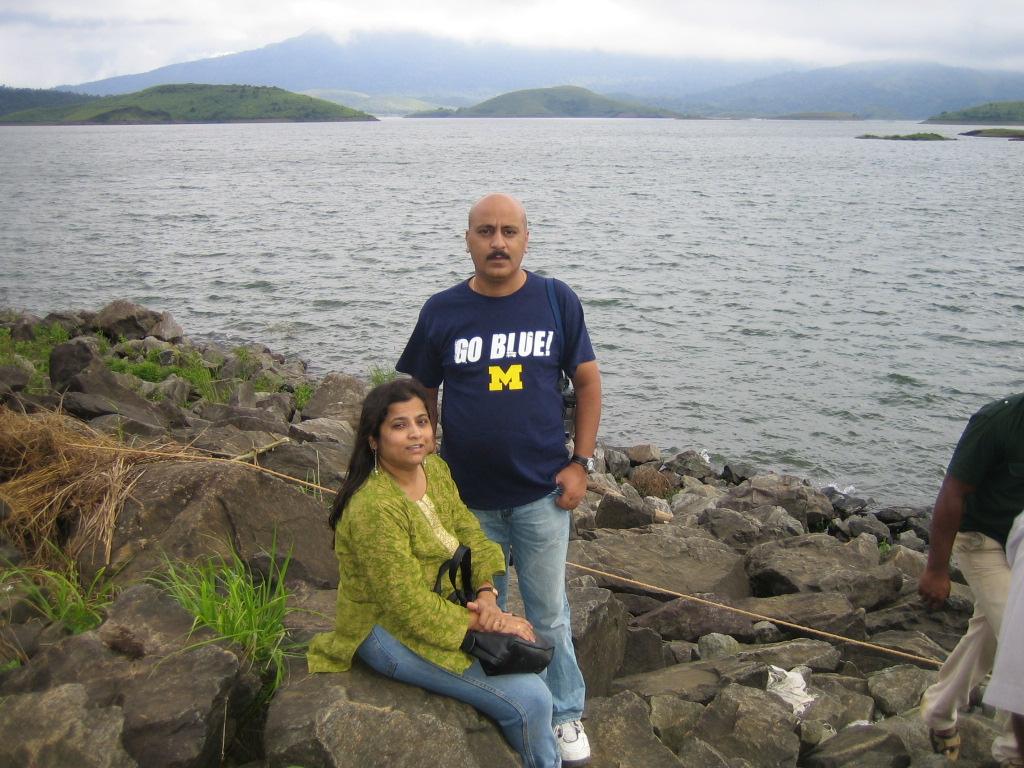 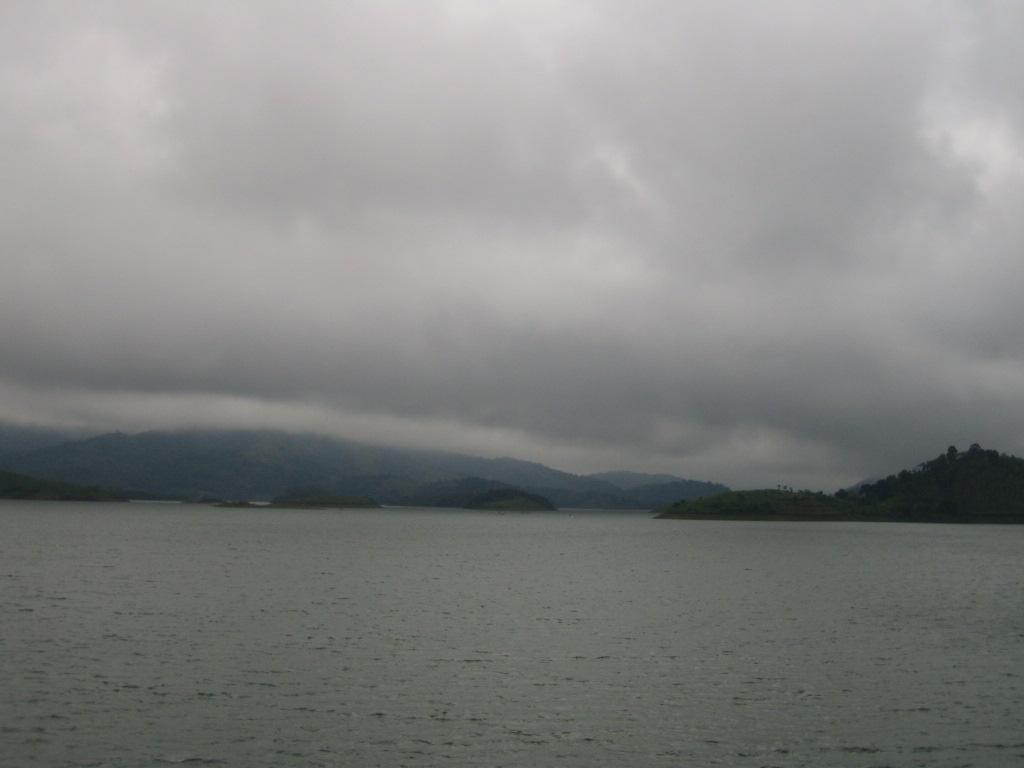 While driving back we took a diversion towards Karlada lake. It is 3 kms from the main road. The lake was no good and is in a neglected state. But the 3 kms drive was on a narrow road passing through a village. We got to see lots of banana and palm plantation. We realized we had truly arrived in God’s own country. We just stopped at one point and stared at the beauty. The drive back to Kalpetta was a real slow one, as if the village was beckoning me to stay back.

Day three dawned and we checked out after breakfast. The next destination was Edekal caves ( 20 kms from Kalpeta) on the way back. Take a right on the highway and go up a winding path through a forest. We parked the vehicle. Again we had a choice- take a jeep or walk. This time we went for the jeep. The climb was steep and the jeep also goes only to a certain extent. From here we climbed till the base of the caves. The first cave has a small stream of water flowing through it and tree which seems to have sprouted through the rocks. We came out the other end through a very narrow passageway. 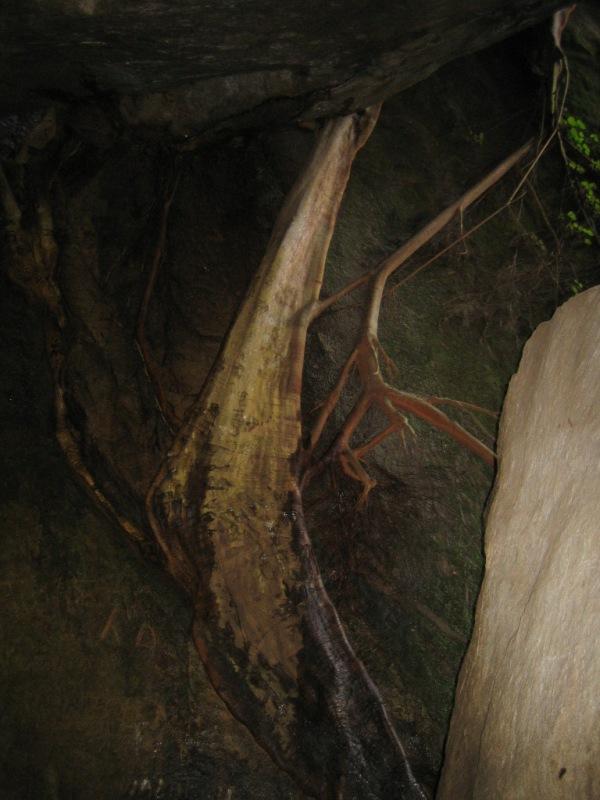 Again there is a climb over rough steps cut out of the rocks. Once at the top, we entered the main cave. Well, actually it is a cleft formed due to an earthquake as per the official guide there. The walls have a number of paintings carved on them and looks more like ancient tribal art with human and animal figures and symbols. We spent about half an hour in there and there is natural light filtering in through the top. At the caves we met our friend, Karthik and his colleagues.

After some initial discussion it was decided that we would climb further up the mountain and it was pure fun. At one point we had to climb with the help of a rope. It was a good short trek. 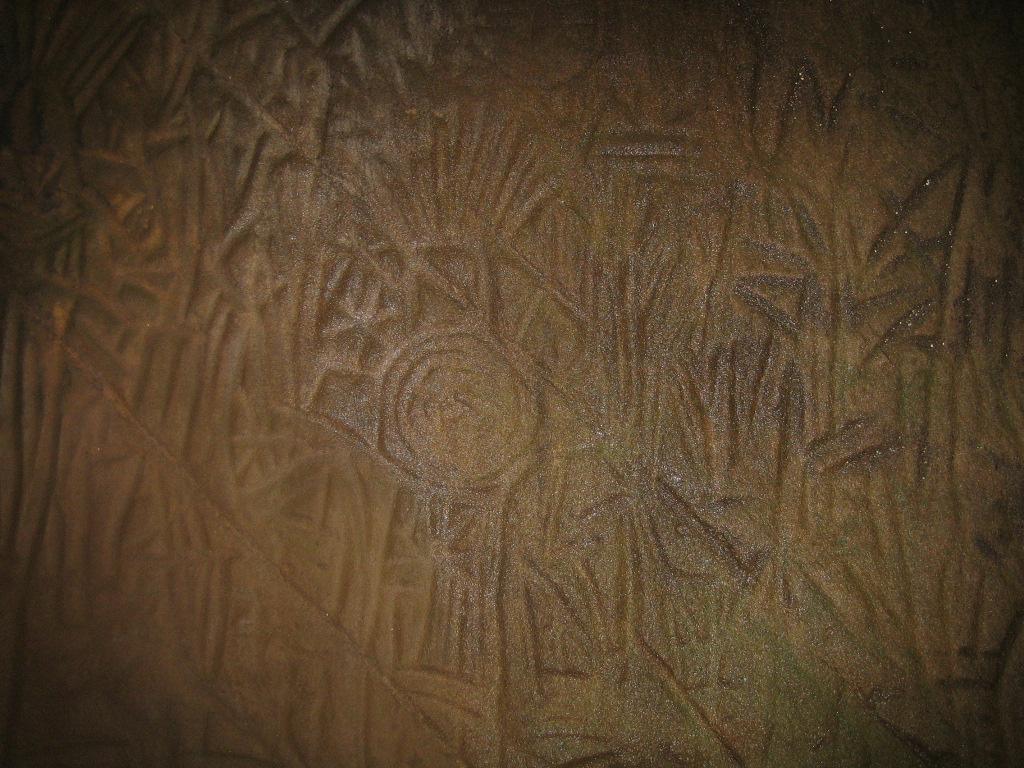 Edakal over, time to drive back to Bangalore. The drive was good with usual stops for lunch and tea. Reached back by evening straight into the Bangalore traffic.

Kids should always carry a backpack for themselves. I’ve faced this problem with my mother and father. When we started traveling my mother and father used to keep my kit and my books in their bag, so I used to ask a lot of times then they used to get really irritated and I also. So from then I suggested that I will take my own bag on the trips so my mother father bought me a bag.