Mebar Tsho – How can a lake be burning?

In spite of our best effort, we could not wake up early. Due to the accumulated fatigue, our body system took a long sleep upto 7 am (IST). So, after having the breakfast, we started our journey at 9.25 am (IST). First, we went to the Burning Lake (Mebar Tsho). It took approximately 20 minutes’ drive. How can a lake be in the state of burning? The typicality of the name takes us to a mysterious tale.

The Burning Lake, in fact, is not a lake. But, it is a spot by the hilly rivulet named Tang Chhu in Tang valley. (In my previous post in this series, I mentioned that Bumthang consists of four valleys, namely Tang, Ura, Choekhor and Chumey).

As per belief, in the year 1475, religious icon Terton Pema Lingpa had jumped into the lake with a burning butter lamp in his hand. When he came back from under the water, the butter lamp was still burning. He also known to have brought a script, a statue and a ritual skull from the stream. So this place is considered to be very sacred.

Wooden bridge over the Burning Lake

To reach the spot, we followed a narrow hilly path from the main metal road upto the edge of the hill. There were array of typical Bhutanese colourful prayer flags and small clay offerings called Tse Tsa in rock niches. At that point, there was a beautiful wooden covered pool connecting the opposite hill. The pool was like what we saw at the Trongsa Dzong.

The fast running rivulet was wider, flowing far below through adjoining edges of two hills. However, the water looked very black. Since we know that water is colourless, the surface of the bottom edge, through which the stream was flowing, must be black. That should be the reason of black appearance of the rivulet at that point.There were lots of insects flying around.

No sooner had we reached there, flock of small insects covered our face, particularly started to fly around our eyes and camera lens.As we were the only visitors at that place, we became easy victims. It was really difficult to take photo in that condition. After much endeavour, I was successful to divert the insects. I stood on the top edge of a cliff and took some photos.

The spot was literally dangerous, because one minor slip would throw a person deep inside the fast flowing stream. The place was covered with tall trees, restricting sunrays to come down even in summer. The atmosphere was tranquil and cool, totally synchronised with our morning mood. The surroundings and ambience reminded me of river Dudhganga of Yushmarg, Kashmir. Chirping of the birds, burble of the rivulet, seamless sound of crickets with no one around (except speechless ourselves) made to feel the place like heaven. 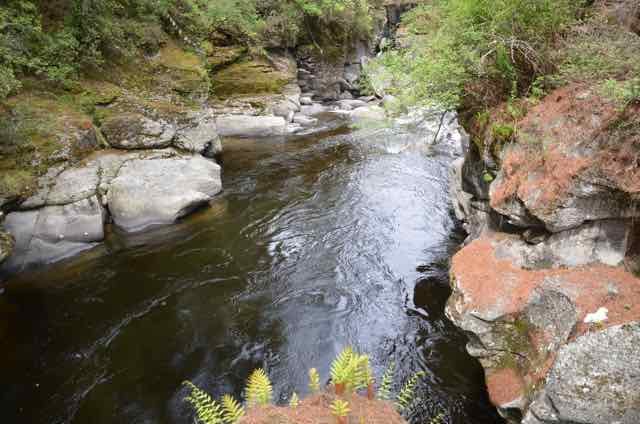 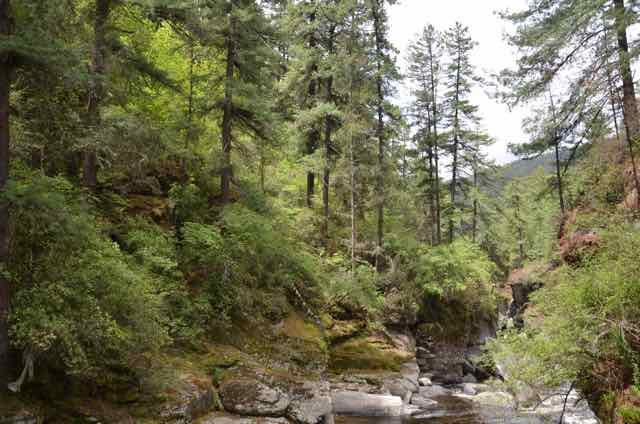 Nature around the Burning Lake. There is striking similarity with Kashmir or Himachal

Then we had to move to our next place of visit, namely the National Sheep Breeding Centre at Dechenpelrithang. It was just a 10 minutes’ drive from the Burning Lake. The sheep breeding centre is situated at the top of a green hill. The hill was rather small, covered with carpet like green grass. The road going from the main metal road upto the top of the hill was covered with tall trees.

Many sheep were roaming about freely. At the top of the hill, there were one storied small buildings belonging to the centre, accompanied by a big chorten. But two things amazed me a lot. First, the 360° grand look of the surrounding valley and hills from the top. Second, the big and beautiful Zangtopelri Lhakhang, also situated atop the hill within walking distance from the centre.

View of top of the National Sheep Breeding Centre at Dechenpelrithang

This Lhakhang was a tall one and extremely beautiful. But we found it closed. It had glass doors, through which we had to look inside. Innumerable idols of Guru Rinpoche & other greats, photographs of Kings and colourful decorative items displayed everywhere inside attracted our attention. Even, there were many idols placed outside in the open space on the ground of the hill, following a circular pattern around the Lhakhang. We took many photos of the Lhakhang and the hills and then resumed our journey. 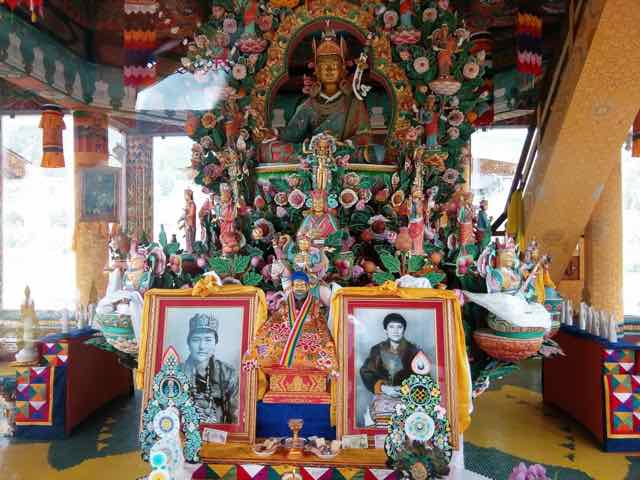 Inside view of the Zangtopelri Lhakhang

Selfie with our guide Wangchuk in front of the Zangtopelri Lhakhang

It was opened in 2011 with flight connectivity with Paro. There was a small building inside the airport, beside which a small aircraft of Druk Air was standing. Entire airport area was encircled with barbed wire fencing, unlike the layer after layer barriers and high walls seen in Indian airports. Even the road through which we were going, was in close proximity with the fence. 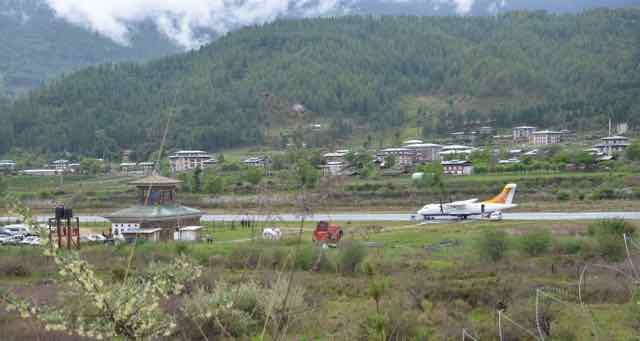 Kenchogsum Lhakhang – the reminiscence of history

Just as we resumed our journey from the Bathpalathang airport, it started drizzling. By 11.15 (IST), we reached Kenchogsum Lhakhang (also known as Konchogsum / Kenchosum Lhakhang). This is one of the most ancient Lhakhang of Bhutan, meaning three jewels, was built by Emperor Trisong Duetsen in 9th century. It is believed that Guru Rinpoche designed the Lhakhang and personally visited Bumthang to perform consecration ceremony. It is also believed that Guru Rinpoche hidden several sacred treasure texts and relics, which were later on discovered. 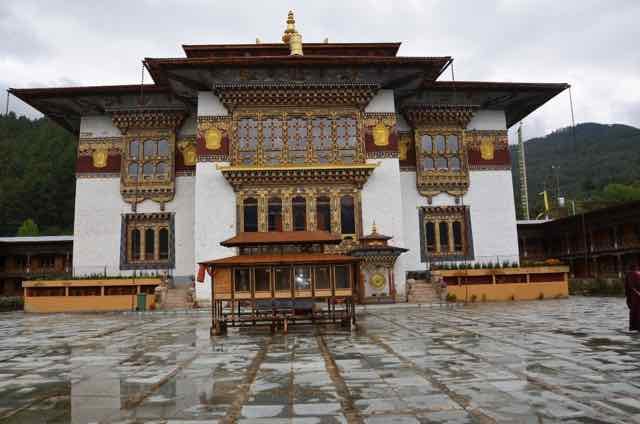 The most beautiful Kenchogsum Lhakhang

In 2010, an unfortunate fire incident hugely damaged the Lhakhang and some sacred relics. This created nationwide mourning and despair at that time. So Royal Government of Bhutan took a challenging task to restore and renovate the Lhakhang, with worldwide support and good wishes.

What we see today, is a new look Lhakhang, which is inexplicably beautiful. The original one is kept at the centre, around which the new one and other structures have been designed. On either side, there are residential quarters for the monks. 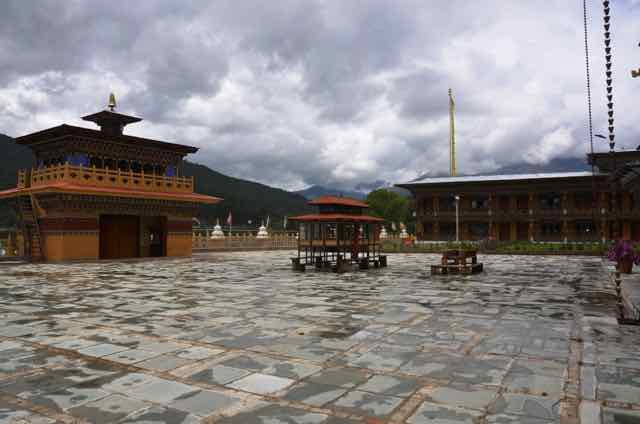 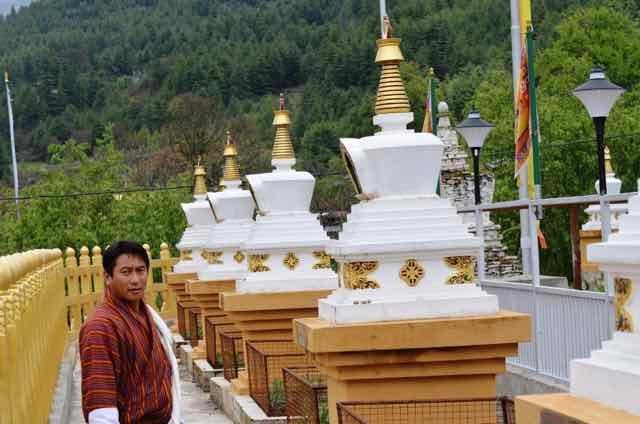 Every surface area of the Lhakhang was decorated with murals and attractive designs. It is a colourful world. There are statues of Guru Rinpoche, Nampal Namse, Pema Lingpa, Chenrisig and Longchem Rabjampa in the Lhakhang.

There is also an ancient and huge bell (choedril). We have been told that once the Tibetan army tried to take it away. But due to its excessive weight, they dropped it. Thus the bell was cracked. 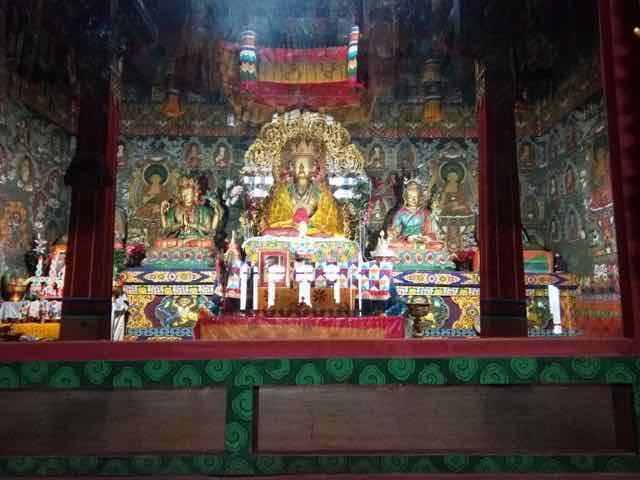 Idols of deities inside the Kenchogsum Lhakhang 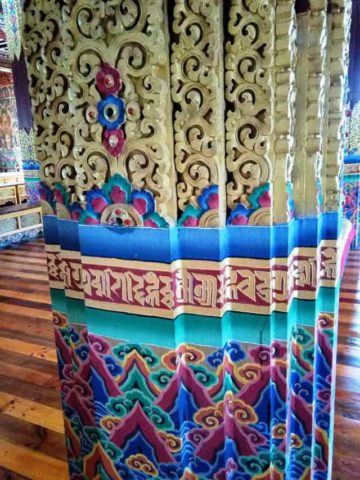 Painting on the pillars inside the Kenchogsum Lhakhang. Please note the alphabets, which appear to be a hybrid of Sanskrit and Tibetan alphabets

Very nearer to it was another heritage monastery, called as Tamzhing Lhundrup monastery. It was built by Pema Lingpa in 1501 AD – as we had been told. All signs of heritage structure were evident. We had a quick visit inside the premises. 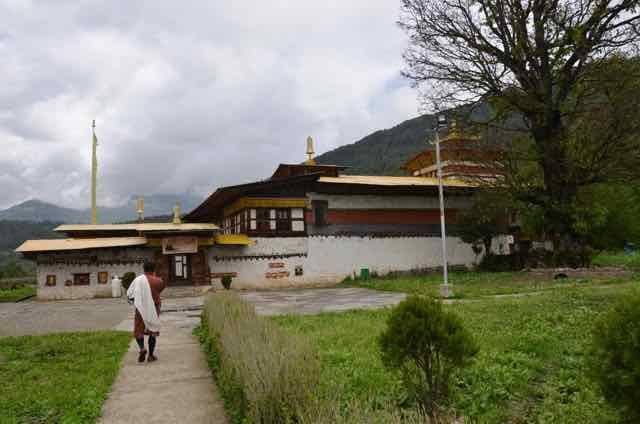 It was well past noon. So, we decided to start the return journey towards Langthel. We followed the same route to Trongsa. We stopped at Trongsa town again to have good bakery items as refreshment. Freshly prepared bun and other confectionery items were served to us, which were simply splendid. We bought grocery, fish and other provisions from the Trongsa market.

People of Langthel either go to Gelephu or to Trongsa for shopping needs. We safely returned to Langthel in the evening after a memorable trip to Trongsa and Bumthang. 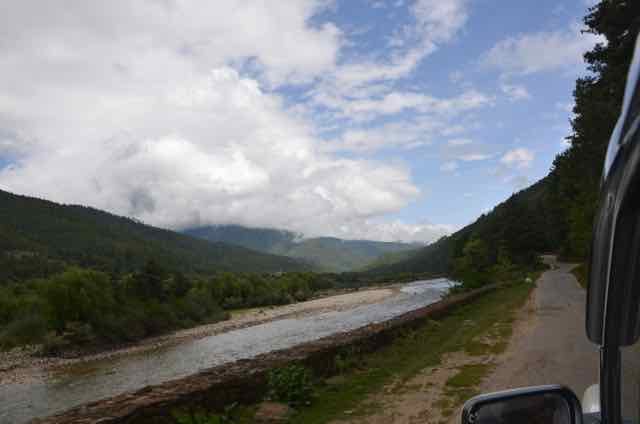 Have you heard of The Burning Lake in Bhutan? was last modified: November 14th, 2017 by SANTANU

Gaddis are basically a nomadic tribe who mainly lead a pastoral life depending on their cattle for their livelihood and wander in the high altitude alpine meadows for green and protein rich grass for their cattle and the nectar like pure water. These gaddis seem to be the happiest souls in the world without any worry cheering and living life happily in the lap of mother nature enjoying her eternal and purest beauty to the fullest. You envy at their life for a moment and then wish if you were born a gaddi, maybe in your next life…:)