It’s been a short while in Manali, but we targeted the main attraction first before anything else. I had read about the warnings about issue with higher altitudes to some & preferred way to spend sometime to settle with lower altitude first & gradually move towards higher one but the same time, it was also mentioned that road journeys more or less handle it on their own for majority. So, it was almost safe to pick Rohtang pass within hours of reaching to Manali from plains.

We came out of hotel with a weird incident as in the narrow street, someone had parked his SuV in middle and just 3-4 feet remaining. To my surprise, Cab driver tried to went past in even that space. I thought, do these drivers don’t care about scratches on their vehicles? But then the SuV driver also came in and it happens to be like that someone had parked in his place & so for giving him a lesson, he had parked in middle of road behind his SuV so that he can’t move his vehicle without him getting to know about it. I thought these road rages & parking troubles aren’t a Metro trait only.

Drive to Rohtang from Manali

Anyway… journey begun and my job was to observe if roads to Rohtang would have been drivable in case, I had decided to drive on my own as some forums even suggested me to & I really was tempted too. Within mins, I realized that one is better off hiring a cab than going via own vehicle. The speed with which cab driver was driving in dead night was beyond my imagination. Scary if anyone would have come in his ways. I know cab drivers are like that in every city but I thought hill drivers would have been on slower side. More than that I loved my car too much to risk for scratches which would have inevitable if there was a choice between safety and car during the rough terrains.

As the journey progressed, I was rather impressed with driving skills of the driver. First we took a stop at a shop to rent out cloths for self, wife and kiddo. What I observed that cloths aren’t for the cold but for shielding from being wet from dead cold snow. Plastic boots and normal waterproof kinda of jackets cutout in unique way, in which lowers and top both been joined together and one had to move into it and then put the chains. Though issue with that was.. if not impossible then hard enough to reach out for pockets once you are in means I was denied taking out cameras and had to be dependent on two mobiles only.

Lesson for readers: Better to keep your purse, cameras etc outside in some bag rather than keeping in pant pockets.

Starting from 2.30 AM, we must have been among first 5-10 tourist cabs\ cars moving towards Rohtang. Not to say that we didn’t receive traffic on the way, but majority of those seem to be those trucks, oil tankers, bikers heading towards Leh-Laddakh. Also the notion that no vehicles allowed to come down before 11AM also came out to be false. As per driver, there was some festival season in Laddakh in last days so many trucks returning back after delivering goods. You can imagine the rush in other hours if it was the case at 3-4 AM.

Anyway, the ride was kind of fast & furious. Kind of upward slopes, winding turns & kind of overtakes he was making, we were just hoping that he doesn’t hit anyone else (our car didn’t seem to be at risk despite of going close to border of roads). I knew that there were some scenic places in between near Gulaba etc (seen while returning later on) but in absence of sunlight, all we could figure out been how many other vehicles have started same early though just 15-30 mins after us so much below on route.

On the way to Rohtang, have an idea of traffic

We reached at Rohtang Pass by 4.45 AM means distance of 52km with an elevation of 6500ft was done within 1.45 hrs that too when apart from rush, we had to stop by some 15-20 mins at Rani Nallah (8-9 kms far from the Rohtang pass I guess). HP cabbies were provided some sort of circular stickers to their cars by administration I guess. Our driver also seems to be of little extra adventurous and helpful. Many a times, he stopped the car and walked ahead to clear out traffic, sat in Rani Nallah, removed stones, pushed stuck vehicles out of water and so. Trust me, it was a big thing to put such labor even in those conditions when Oxygen levels were thin but I observed that most of HP Cabbies been doing the same as sitting idle in cars\ SuVs like tourists wasn’t helping either. 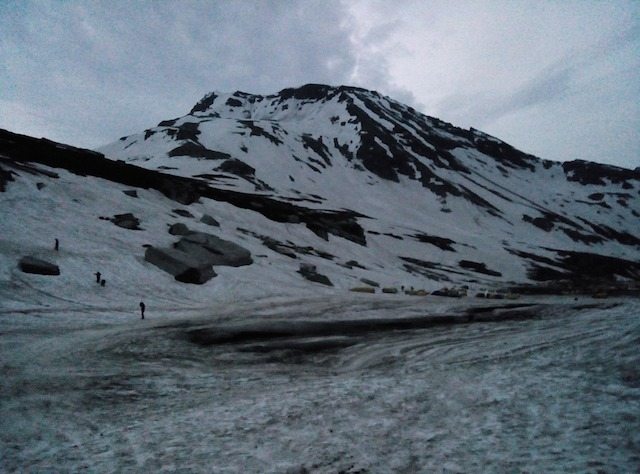 First view of the snow everywhere

At the top, not many were there before us as private vehicles don’t prefer the hilly ride in dark & only experienced ones drive through night. When we reached to top, then sunshine had hardly begun. Snow wasn’t all white as we might have pictured in our mind nor spread all over like it happens to be in may or august, but land spots were looking out from snow layers. Tourist footprints had made snow dirty a little and even after those boots, keeping the feet on ground was chilling. 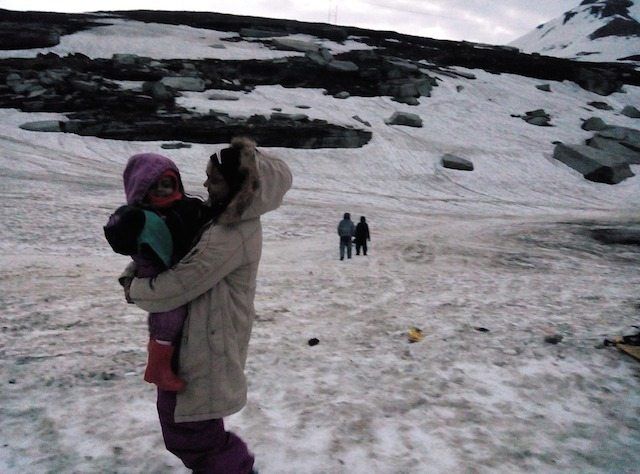 Kiddo and wife in snow

Finally on the top 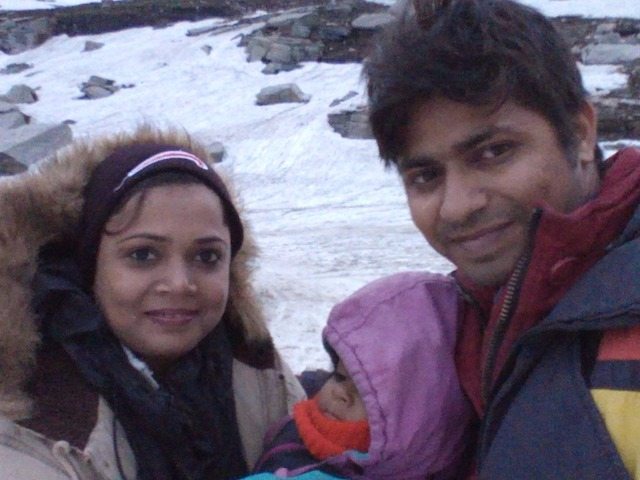 But cold was among least worry of mine. My worry was my two year kiddo with me, who due to sleep wasn’t much active & connecting it with our breathing issues a little, I was restless if she feeling any trouble. Usually she tells us if any issues by making noises or cries but her silence even though natural due to sleep at that hour of day, didn’t let us go off the guard. 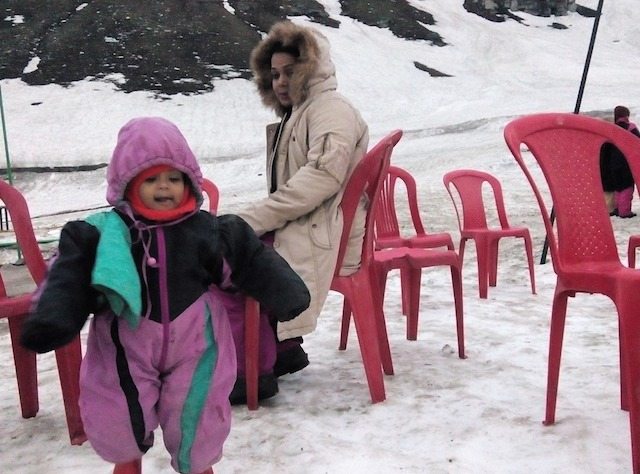 Another 360 degree view of Rohtang Pass

We ordered tea from a shop which was just opening there but when the tea reached to us then it was almost cold. Wife argued a little with the shop owner but after having read through many travelogues, I was aware that it was very natural at such temperatures. We did little snow play out there, some slides, some walking, throwing snow, took some selfies, enjoyed views though I was desperately waiting for sun to show up as had some ideas about the charm of golden snow once sunrays hit them. I tried to check the network in the way, but at this height, neither of Vodafone Prepaid or Airtel Postpaid had any signals. I remembered those claims of theirs in ads but can understand the business reasons. 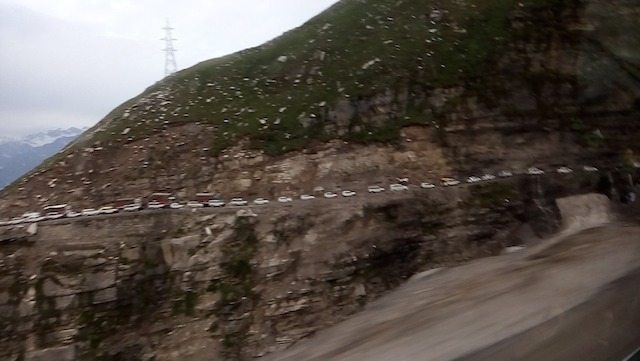 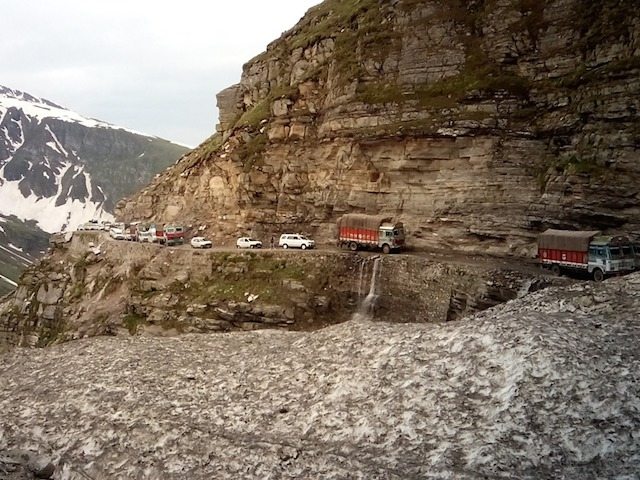 The number of vehicles coming upwards was growing exponentially & so was the jam near Rani Nallah. Same time, wife had given up standing in snow as legs were freezing out there, not to say breathing issues weren’t letting us do much of running etc. Holding kiddo in hands was also a labor stressing us. I had to take the call to come back before the route becomes too crowded. I would’ve stayed if kiddo wasn’t wish us, but decided to move back.

We came back to our cab where roughly four of drivers been sitting inside the cab. These guys don’t even prefer much of jackets etc on. Our cab driver had only thermacoat & Sweat shirts on. He happily became ready to drive back and in this way, we became one of those first 5 cabs, which moved back first. Rani Nallah was waiting for us for a long jam. Took at least an hour in which cab driver of ours & of the one in front of us putting hard work to help out others to come out that water logging at Rani Nallah which is a norm due to both side snow walls constantly melting. I still think that BRO can sort this issue by creating a slope kind of but they are the experts out there & know their jobs better, so let’s wait when this issue gets sorted out. 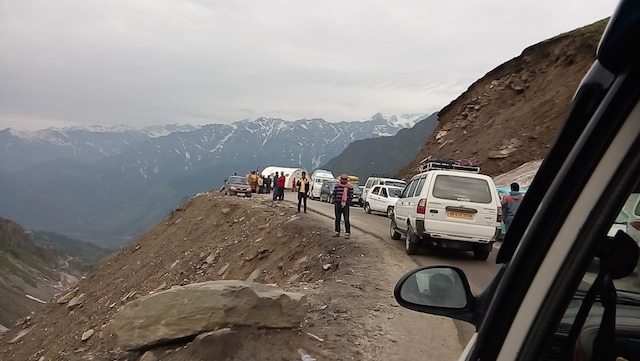 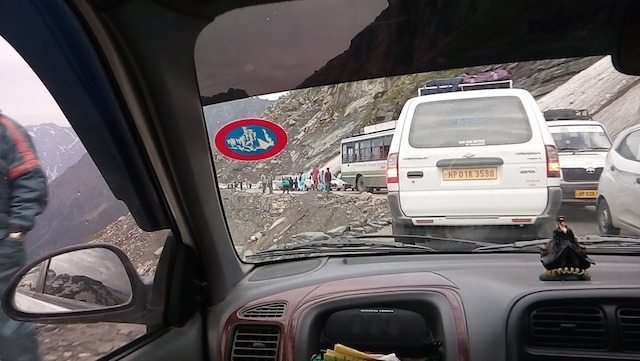 After an hour or so, we moved. Apparently our cab driver was waiting for certain trucks & bigger vehicles to pass through first and then figuring out his ways. Once those trucks were past, he started cutting his ways from narrow space left by vehicle on that narrow road. We realized that real trouble wasn’t the climbing but the part when we drive back in the rush which was sure to be continued till late evening. Though once we passed through the clot near Rani Nallah, it became easier to drive down.

Our driver was driving at 50-60kmph even at those narrow and sharp turns and I was looking at the view at our disposal. It would have been great to stop & take some snaps but same time, we wanted to reach as early as possible so that full day remains at our disposal. The greenery and views near Gulaba was really breath taking at some places and so were the view of winding roads from certain points when looked down. When half an hour route remained, our driver asked if we wanted to stop & take tea etc, but I preferred him to drive till hotel. (Only later I realized that he might have been asking for self as well). 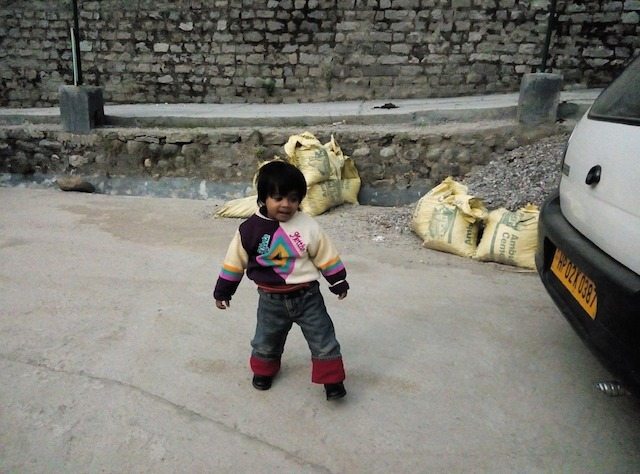 And here we are back in Manali

We reached to our hotel by 7.50AM after giving back cloths to rent shop (Rs 250/- each, paid Rs 700, which seems normal rates though I seen one shop in the way offering it for Rs. 50 only) and then kiddo was fully active & playing. I regretted if we weren’t scared due to kiddo then we would have stayed a little longer even if that was meant to face much longer jams. Also the fact that cloths from those rent shops weren’t needed apart from those plastic boots (which could have been bought at same rates & cloths were needed only for avoiding dirt on own jackets or cloths.

Manali to Rohtang : Yes! We did it finally was last modified: November 15th, 2021 by Nitish Kumar