In continuation to my Frankfurt journey ,next day morning we left for Mainz and we walked down to Frankfurt Railway station and caught a train . It took around 20 mins to reach our destination and got down one station before the Mainz Main Station. The prebooked Hotel {Mainz Hyatt} was just a walking distance from the station.

Mainz is one of Germany’s oldest cities & capital of the state of Rhineland-Palatinate, on the Rhine River. Here you can experience history at close quarters – from the Roman to the French revolution. Mainz’s cultural-historical heritage is unique. It is a city with over two thousand years of history.

After the end of World War I, Mainz was occupied by the French between 1919 and 1930. During World War II, more than 30 air raids and bomb attacks destroyed about 80% of the inner city of Mainz, including most of the historic buildings.

From 1945 to 1949, the city was again occupied by the French military. When the federal state of Rheinland-Pfalz was founded on 18 May 1947, Koblenz was the temporary capital; in 1950 Mainz became the capital of the new state. 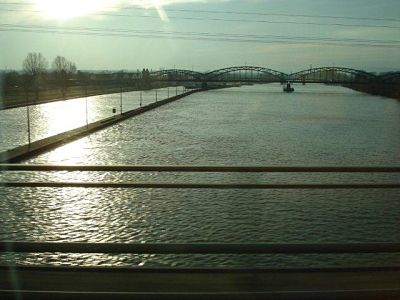 Gutenberg, the inventor of printing with movable letter, came from here.
It is a major port, a leading trade centre for wine. The city is member of the Great Wine Capitals Global Network. The famous Blue Nun, one of the first branded wines, had been marketed by the family Sichel.

Mainz is also the home of the Music publisher Schott Music. 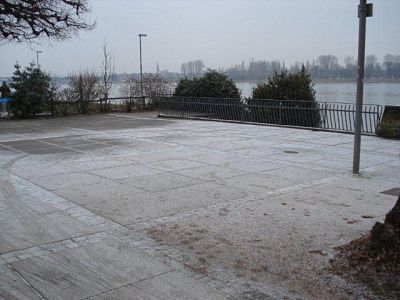 After attending our meeting we reached our hotel by 5.15 PM, without wasting the time we changed & left for the city tour. Mainz is not a very big city like Frankfurt & Berlin. Most of the tourist places are close to our hotel. We went through some of the tourist brochures available in hotel & started to explore the city. Due to the shortage of time, we were not able to cover the entire city in one day. It took almost two days to visit most of the tourist spots.

St. Martin’s a 1000 year-old Roman Catholic cathedral is located near the historical centre and pedestrian market square of the city of Mainz, Germany. It has also has a central courtyard and statues of Saint Boniface and The Madonna on its grounds.

Mainz Cathedral is still almost completely enclosed by surrounding buildings. The “cathedral mountain” of red sandstone that has grown in the course of the centuries forms a contrast to the light coloured stone of the Romanesque St. Gotthard’s Chapel which Archbishop Adalbert erected before 1137 as the archbishops’ private chapel. The cathedral was burnt seven times in the course of the centuries, and the fear of fire was great. After the west tower was struck by lightning, in 1767 Neumann provided it with a new spire, with references to the Gothic bell chamber in its form. It too was constructed with stone and not with wood as previously. 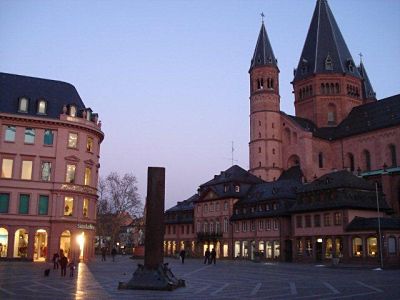 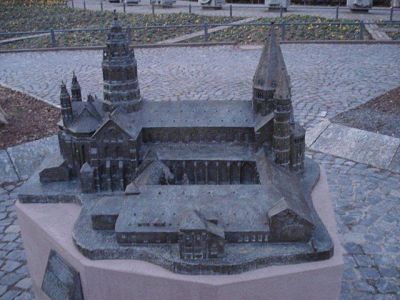 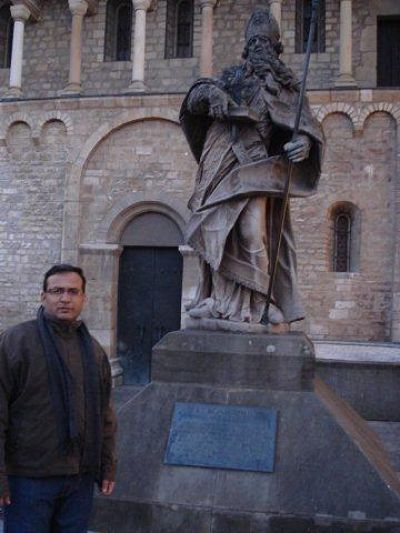 Opposite to the cathedral, in the centre of the old city of Mainz, is the Gutenberg Museum. It is one of the oldest printing museums and a hub for tourists and professionals from around the world. 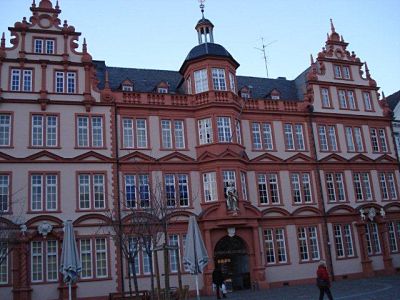 One of Mainz’s most famous landmarks is the beautiful Mainz Theatre. It is centrally located on Liebfrauenplatz square. 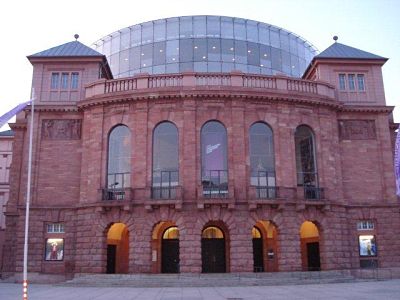 The Carnival fountain is located in front of Schillerplatz. This centre piece Stands 8.5-metre, almost 28-feet tall and is a tower of fools made of bronze. Designing by Blasius Spreng in 1967, it is populated by some 200 symbolic and fantasy figures which are traditionally seen during the pre-Lenten Carnival season. 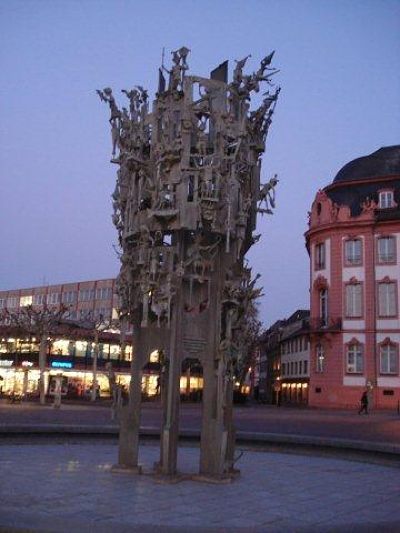 The Osteiner Hof is exactly across the carnival fountain and was built in mid of the 18th Century as a family palace for Prince-Elector Johann Friedrich Ostein. Since 1958 the palace has served as regional headquarters for the German Federal Armed Forces 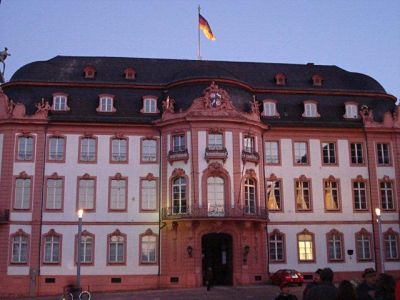 St. Stephan’s was constructed between the years 1260 and 1336. It is the city’s second largest church after the Cathedral -St. Martin’s. St Stephan’s has experienced many depredations in the course of history. During the Second World War it was almost entirely destroyed during air strikes. With its reconstruction and restoration, this Gothic church has experienced its revivification. In 1978 the Jewish artist Marc Chagall (1887 –1985) created the world-renowned Chagall Windows as a symbol for Jewish-Christian solidarity.
More than 200,000 tourists from all over the world undertake the pilgrimage every year. 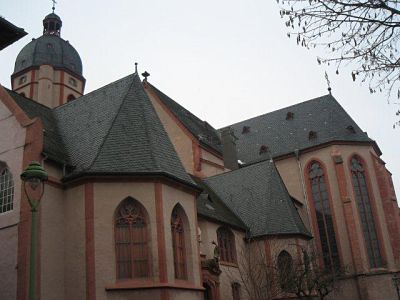 The Mainz City Hall (Rathhaus) is an architecturally appealing building located on the banks of the Rhine River. The departure terminal for Rhine River cruise ships and ferries is located near the city hall. 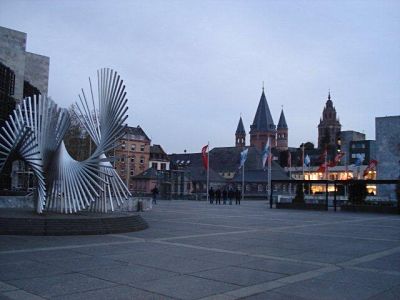 The Theodor Heuss Bridge is an arch bridge over the Rhine River connecting the Mainz and the Wiesbaden. The main span of the bridge is 102.94 meters (338 ft) long. The Romans had built a bridge in this region in 27 AD, while the first arch bridge was inaugurated on 30 May 1885. The bridge was widened from 1931 to 1934 but was destroyed on 17 March 1945 by German military engineers at the end of the second World War. It was rebuilt in the years 1948 to 1950 and partially reconstructed between 1992 and 1995. 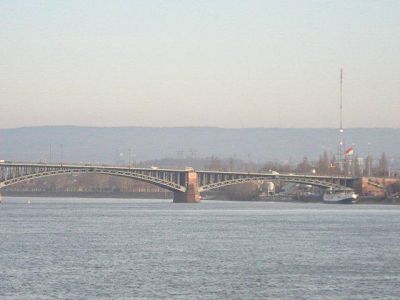 The day before the last day of the meeting the dinner was organized in a cruise for all the participants who came for the meeting, the participants were from Europe, Middle East & India. The ambiance & the hospitality of cruise were good but my personal experience regarding the food was not as good, because of the lack of choice, there was a fixed menu & that too was beef, any how I could manage with the available snacks. Even we were not able to enjoy the outside view as it was dark. It was an almost three hours tour with light music, drinks, snacks & food. 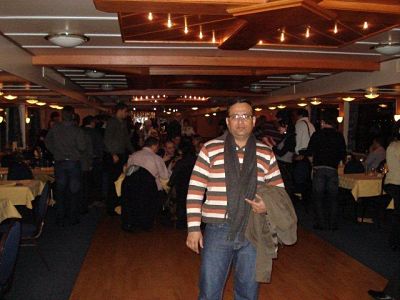 Going to end my Germany Trip with Wiesbaden by next week.

Till then Good bye. 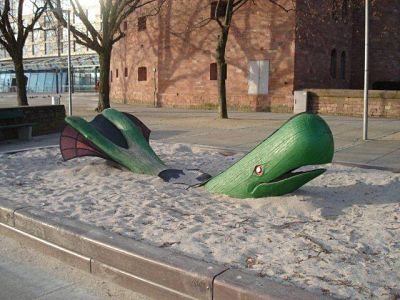 The grandeur was so vast and limitless that it never appeared Earthly. As if it was a symbolic display of cosmic truth. The mist seem to be representing the world that we live in. We are the tiny drops that constitute that mist, so very attached and absorbed in that haze. But up there a blessed energy awaits us. Only if we have the courage and awareness to unbound from this ocean of mist and set our selves free.