Day 3 of our trip was devoted to mom, so we basically hopped in and out of malls the whole day. The only kinda documentable part of it was some bland and squishy-squashy prawn salad and a little mid-night snack consisting of Serials, Chips and Cereals.

Our plan for Day 4 was to go to this place suggested by Honey (my mausi) called The London Dungeons, which was in central London. It was like a Scarehouse, if that’s the word I am looking for.

I got up by about 9:30 and I wanted to be out in an hour, as I wanted as much time in Central London as possible. But as you guys would have guessed, we didn’t leave a minute before 12:00. Which could also be attributed to the fact that, suddenly, out of nowhere, it started raining Cats and Dogs, and so my mom started toying around with the idea of ‘kya itna door ab jayein , let’s just go to an indoor place, say a mall.’ I refused before she could even think Jack Robinson. I mean, I don’t really mind a little retail therapy, but that is, if the therapy is for me. 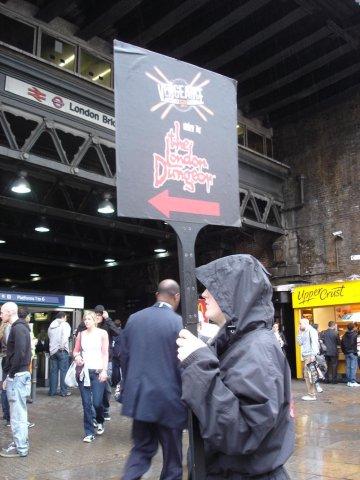 Anyway, the moment the rain became a little lighter, we made a run for the bus stop. It didn’t rain too much on the way to the tube station, and once in the tube, we almost started illusion-ising, a clear, sunny day ahead of us. But alas, we exited the station only to be greeted by rain, and a lot of it. We took shelter in those little corridors in front of the shops, and started asking around, for the London dungeons. Within about 3 minutes, we were told by 3 different people that we should have gotten off at the London Bridge Tube Station, and so we ran back into Westminster to catch the Jubilee Line to London Bridge. The train was extremely crowded, and so we stood packed for the 5 minute journey (lunch hour traffic, I guess). By the time we reached London Bridge, the rain had somehow stopped completely. The sky was more or less clear and the weather was at its very pleasantest, so our short walk to The London Dungeons was quite refreshing.

On the way to South Bank

There was a longish line in front of the place, but I knew that we would most probably be part of the next batch to go in, and all the while mom kept on trying to convince me not to waste precious time in such a scary looking place. We were taken in to the ticket counter line. The place was quite creepy, with little gargoyles and coffins and everything. Mom started having huge second thoughts but I was quite adamant about checking out this place.

It was basically a 2 and a half hour walk through the gruesome parts of the history of the city of London. The plague, Jack the Ripper, Sweeney Todd, The Fire of London etc’s scenes were created by the actors, and of course, the props. There were loads of special effects, with seats shaking, hoarse sinister whispers close to the ears, water sprays, ghosts lolly-gagging in the air and all that. My mom clutched my hand tightly all the time, so that I wouldn’t get scared of course.

It was a great experience, & while my mind was busy experiencing, it had again forgotten all about lunch, and so we took a leisurely walk to a little diner nearby. We didn’t find anything interesting there, and so we decided to proceed down to Westminster and eat something there. And so we took the Jubilee back to Westminster, and walked down South Bank (Oh, and by the way, it had started raining again). We looked for the crepe vendor we had bought crepes from last time. But he was nowhere to be seen, and in his place sat a weird sushi stall. Well, kinda disappointed, we continued on our quest for food, and we just happened to chance upon a little waffle stall. Now, I had been watching those Travel & Living shows on breakfast and all, and the moment I set my eyes on a waffle, I fell in food love on first sight….I was smitten; and so it was quite awesome finding a waffle stall. I ordered myself a waffle with maple syrup and whipped cream, and to sum it up – it didn’t disappoint. I pigged on the waffle alone, with mom managing to get a few bites in here and there. I didn’t waste any time getting a second one, and that was shared by both of us. While we were on our way out, our eyes fell upon a delicious looking egg and mayo sandwich. We had to dig into that too, our third eatable in the last 15 minutes. 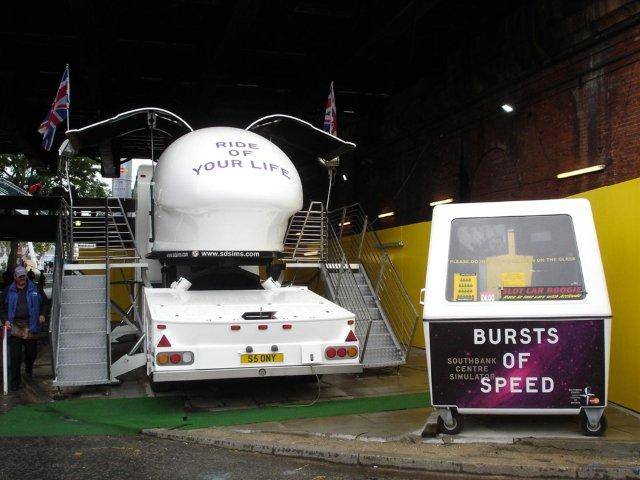 We then went on our little endeavour to look for this little 4D rollercoaster simulator which had been suggested to us by Honey. We did manage to locate the simulator, but it didn’t have the rollercoaster simulation at that time, but this car racing thing. We decided to get on anyway, but the first thing to hit us in the film credits was the year 1997. Yes, 14-year-old technology, so you can guess how it was. It was 5 minutes long, and honestly I was kind of glad it came to an end. 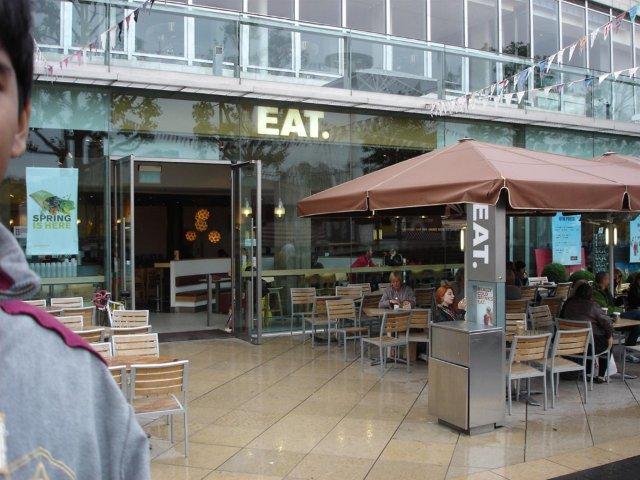 Anyway, we then proceeded down to this joint called E.A.T., where surprise, surprise! They had eatables. Although we were both full & it was just about 6:00, we ate anyway – to get dinner out of the way once & for all, so that I could watch 2 and a half men in peace at night. We ate some steak & stilton pie, just for good measure. I had the edge of the pie first, and by the time I reached the centre-pie good parts, I was quite full. Though I still stuffed that last little chunk of meat down my pie-hole, I didn’t exactly feel too good post that.

South Bank on a rainy day

We then finally left to go back home, as it was at least a two-hour journey. I just listened to songs the whole way.

We went inside the house, & were quite surprised to see the summer’s harvest all on the kitchen table. I hadn’t seen so many vegetables together –cabbages & cauliflowers, lettuce & spinach, carrots & radishes, broccoli & bell peppers in various hues – all fresh from the fields. It was actually the stuff that Mausaji had got from the local weekly farmers market especially for us.

Anyway, dinner, & probably the next day’s breakfast too had been taken care of in the evening itself, and so I laid back & watched a lot of 2 & a half men re-runs before going to bed, putting an end to our Day 4 in London.

So we all went to the Gates of Paradise – the beautiful, descriptive, golden doors of the octagonal baptistery. They were beautiful and were given this name by none other than Michelangelo.