It had been quite some time since I hit the hills and the monotony of corporate life has started taking its toll. So, I decided to break this monotony and decided to escape to nainital. The good Friday weekend was coming and 3 days was an ample time to explore the hill station. Moreover , this was a special trip for me being the first one after marriage :) with my wife.

So ,we zeroed on the plan. My friend Satish also agreed to accompany us.Satish is a good company and is always enthusiastic about nature and hills. One more friend of mine was also going on the same route to Binsar so we all decided to go together till common point.

So we started around 4 am from Gurgaon and picked Satish from his home in Safadarjung after half an hour. Harsh joined us half an hour later.I was counting on my 2007 Santro.The tank was filled and we were all set up for the wonderful time ahead. Though it was only 5 am in the morning, the highway was filled with trucks entering and leaving the city. In spite of all the claims of government, they haven’t been able to build any artery routes around the city. 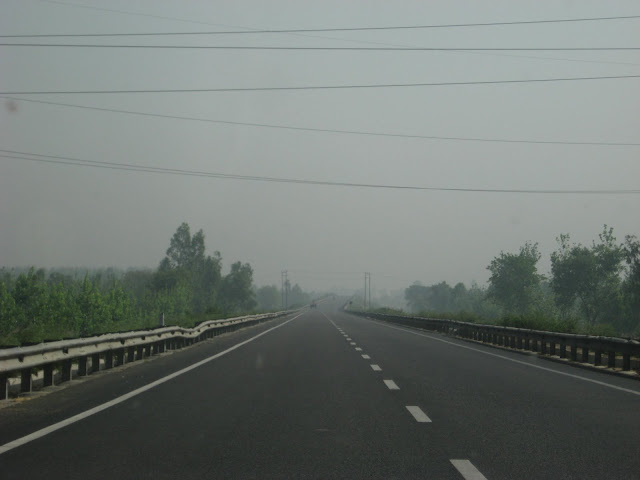 As a result ,big vehicles didn’t have any other road to cross the city. Anyway the ordeal was over in a short time and soon we were zipping on NH-24.The road was pretty empty after that. This road is in very good shape now. Only around Hapur there is still some more work to be done since flyovers are being constructed. And also since it was morning time we didn’t encounter any traffic. Around 8 we reached Moradabad bypass entrance..There is also a McDonald on this same route but we were hell-bent on having aloo ka paranthas and lassi.Soon we found a dhaba and had our stomach filled for remaining journey. 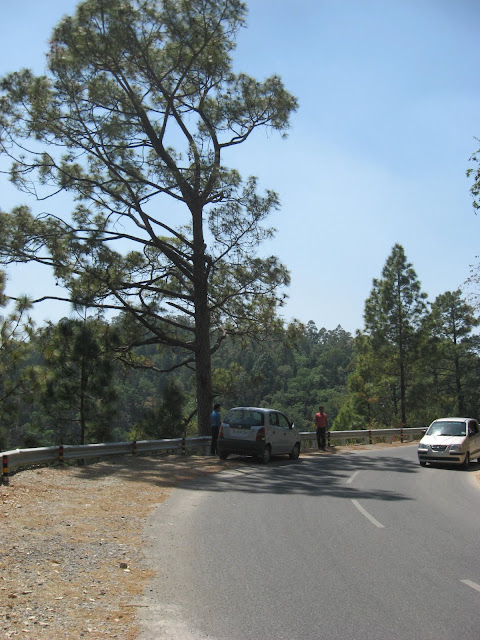 The moradabad bypass was as smooth as silk and is a very smooth drive. It was covered in no time. I also managed to try my hand on Harsh’s safari dicor.What an amazing SUV it is?After the bypass ended we had 2 choices-either to head towards Rampur and Haldwani or take an alternate route through Kaladhungi.We decided to take later one for it was through the Corbett National Park and also we want to avoid traffic in Rampur and Haldwani. 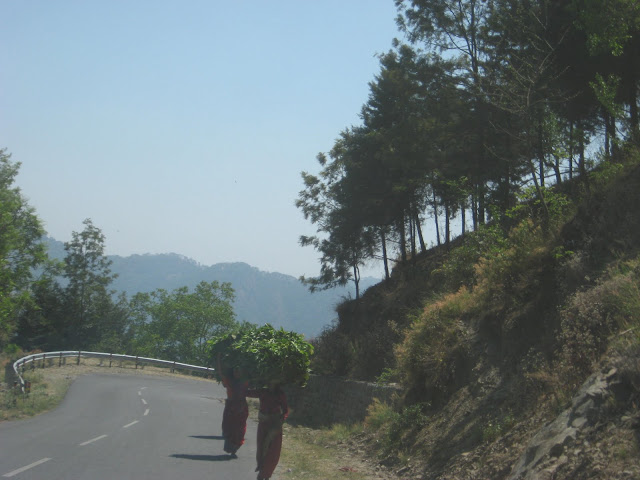 It was a very beautiful drive with not much traffic. The both sides of the roads were covered with trees and nice cool breeze was blowing. Soon we reached Kaladhungi and from there it was a one hour accent to Nainital.The topography changed dramatically and the soon we found Pine trees emerging from nowhere .The sun was warm and we could feel the freshness of air in our lungs.The road here was comparatively in good shape and we were enjoying the drive and scenery,stopping at places we think can give us nice picture shot. The sun was in full glow and it was time to pull out some beer. 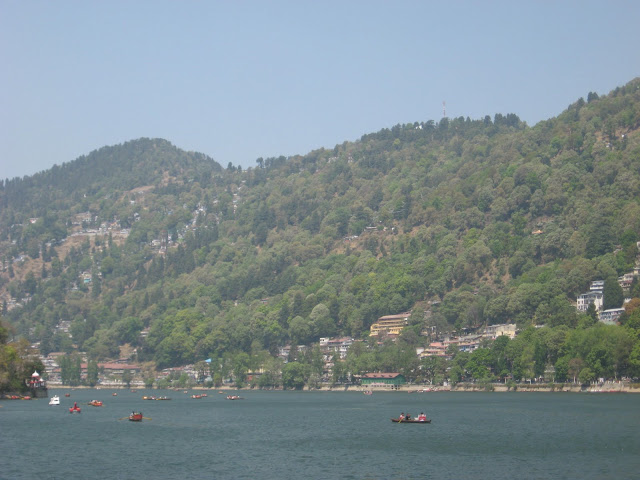 We started searching for hotels but all of them were out of budget and not value for money.Finally we found one near the Naini lake for Rs 1000/-.Dumping the luggage into our rooms we headed for the town.It was already 4 pm and rush had started to build up on the mall road.Since we had a heavy lunch, we decided to stroll the town. 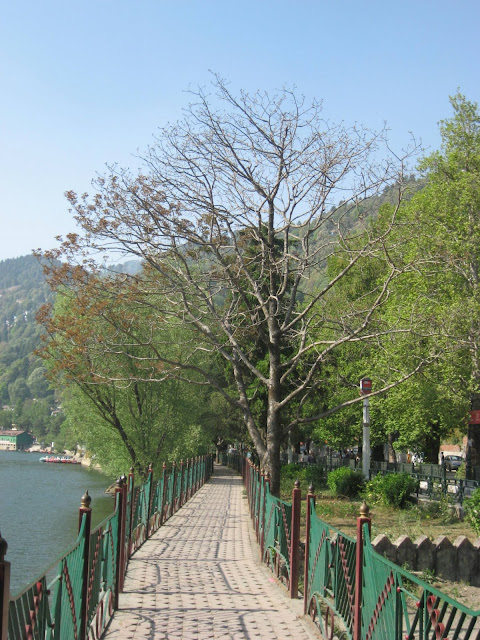 I picked up my sweater since it was quite chilly outside.It was an amazing feeling strolling near the lake and feeling the nice cool breeze against your face.There is an entry tax levied on each vehicle which is entering the mall road so we decided to leave the car in the hotel parking and explore the town walking.Also it could be a nightmare finding parking on Mall road so its better to park somewhere else and explore the road on foot.

The rest of the evening and night was spent in taking a boat ride in the famous naini lake ,visiting the Tibetan market and exploring the Mall road market .Overall,it was a nice day spent. 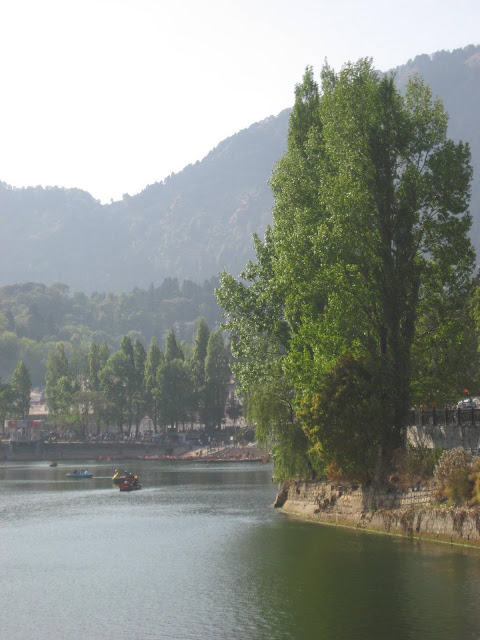 The next day,we had a very heavy breakfast in the hotel – the same favorite Aloo ke paranthe and achar and lassi and were all set for the exciting day ahead. We decided to do some trekking to naini top.

The plan was a little too ambitious as soon we were exhausted and decided to return halfway.It was a good trek anyway amidst beautiful pine and oak forests. Only one regret was there-we couldn’t see the Himalayas for the weather was a bit cloudy and there were clouds.On descending

down we decided to take a boat ride again and the afternoon was spent in criss-crossing the beautiful town. After lunch we decided to head to other lakes in the area, since there was less crowd there and the scenery was spell bounding. 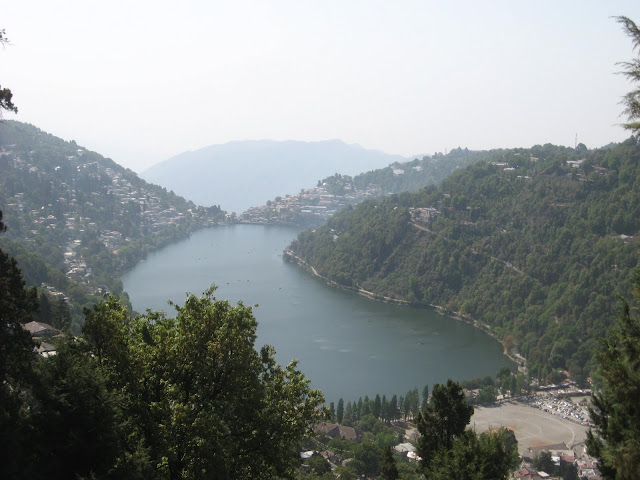 The road from Nainital towards sat tal was a driver’s paradise.Uttarakhand roads have generally been in good condition and this road was no exception.The evening was spent in exploring the lakes and drinking beer and chilling out in general.We came to Nauchukia tal for night stay. There is a KMVN hotel here but it was booked so we booked another resort across it which was quite cheap and nice.(Rs 1000/- for one night).In the evening,we again did some boating.This lake is quite big and we could go only explore one-quarter of it.The night was a little warmer than it was at nainital,still it was pleasant. After dinner we went for a small stroll around the lake.There was no moon that night and the road doesn’t have any streetlight.It was a very eerie feeling to walk there at that hour of night.We soon headed back still having that eerie feeling of someone following us :) 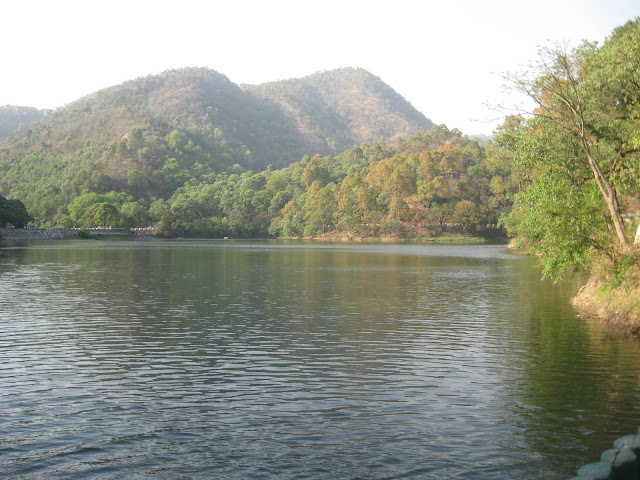 Next morning was very cool.The room was filled with bright warm sun rays and it was time to go.We stopped at bhimtal and had a sumptuous breakfast there.

After that it was a sad feeling as we were starting for Delhi after such a wonderful time here but then one day everyone has to go.Nonetheless we decided to make the full use of our day.On our way down from the hills,we stopped at Gola rivulet and had a great time in the refreshing waters of the stream.After spending 2 hours there,we headed back to delhi with a heavy heart. 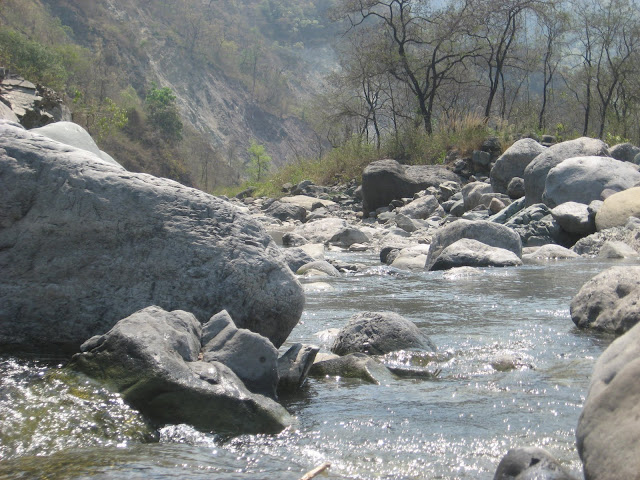 Santro’s tyre also got burst and we had to change it in between.On entering Delhi,there was a massive jam and we realized we are back to mayhem but then thinking about those beautiful moments in Nainital made us feel better and we were already planning our next trip to the mountains :).The total expenditure was as follows :

Total distance to and from Gurgaon : 660 Kms

Drive to the district lake was last modified: September 15th, 2020 by rawatgaurav81

I would like to just describe myself as a nature loving guy,interested in exploring new places.I am working in a consulting firm in Gurgaon and considers my self lucky to be living close to so many beautiful places to explore.I love traversing the hill roads and am equally enchanted by desert of Rajasthan. My hometown is Rishikesh and I just loves it.

Day 3 of the trip to Pachmarhi. We had already covered many of the main areas such as the waterfall (there were other waterfalls,…