Our plan for the day was to meet Honey (my mausi, as the old timers would recognise from my articles of last year) at a food festival at Regent’s Park called ‘The Taste of London’, spending the whole day there stuffing ourselves silly , & then catching a movie in the evening if possible.

Regent’s Park at Central London is one of the Royal Parks of London. It has Regent’s College and the London Zoo in there. It is the largest grass area for sports in Central London and offers a wide variety of activities, and has many cafes and restaurants. The Lords cricket stadium is just a stone’s (or a cricket ball’s) throw from there.
We planned to leave by 11:30 to reach Regent’s Park by 12 noon, & for the first time in our trip we did manage to leave by the allotted time. We were told to dress up semi-formally & so I pounced on the chance of wearing my newly acquired Arsenal blazer & tie.

Anyhow, we ate a light breakfast in the morning, before rushing to take our baths & get dressed, & since it was a Saturday, Mausi was home & she was also able to accompany us. 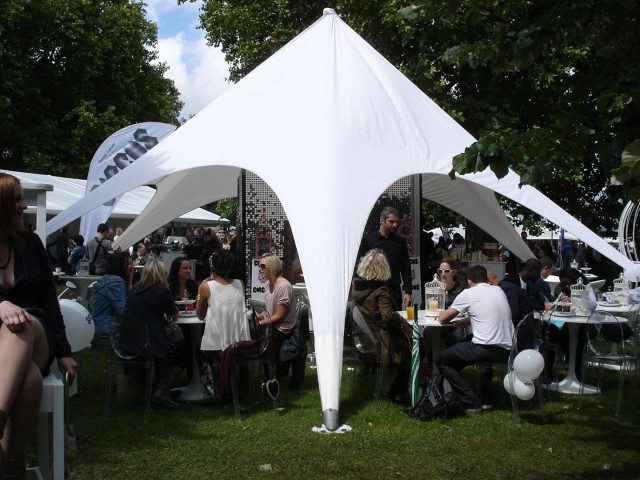 As I had mentioned earlier, we were to leave by 11:30, so naturally I was down at the door by 11 but by the time we finished locking up it became 11:30, which was still okay.

I had downloaded an app called ‘How to tie a tie’, which you know, taught you to how to tie-a-tie & had all sorts of different-different types of knots like the Windsor, the half Windsor, Persian, Oriental etc. I realised that the knot I wear to school is known as the Oriental knot. The whole train journey was spent in trying to tie them all, & then choosing the one I liked best, & so I didn’t recall much of the journey. For the record, I ended up tying a half-Windsor for the event.

We reached the Regent’s Park tube station & called Honey for the exact location. We had reached the tube station by 12:30, but it took us about 15 minutes more looking for the park (which wasn’t a park at all, it was more like a 4 and a half cricket pitches meshed together to form a colossal mass of green).

We met my mausi (Honey, not to be confused with Mausi ji, who is mom’s mausi) at the entrance, & she handed us our passes to the lounge & our tickets to get inside. 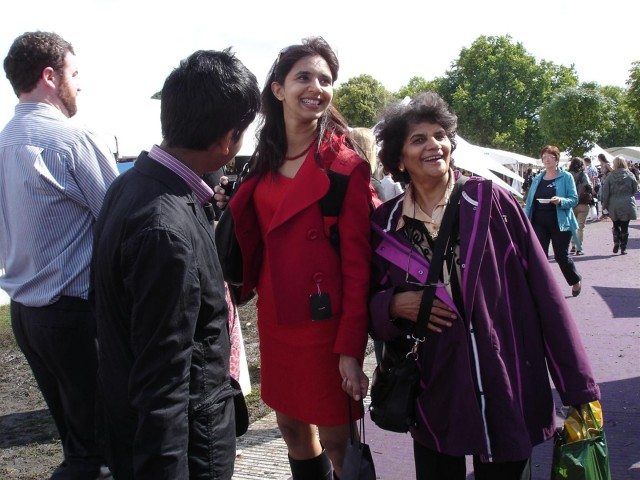 It took us about 5 minutes to get inside as there was a little queue, but we were inside by 1:04 pm. The place closed at 5 pm; however, 4 hours & 56 minutes were enough to stuff myself silly.

The first item on my list for this year’s ‘Taste of London’ was some genuinely nice fish & chips (F&C) with tartar sauce (TS). Since we had landed in London I had managed to get my hands on F&C with TS, but the chips or the fish or in some cases both, were always too oily.

I looked around, & I did find a stall which was offering F&C with TS. There wasn’t too much of a crowd, so I managed to get a helping quite easily. 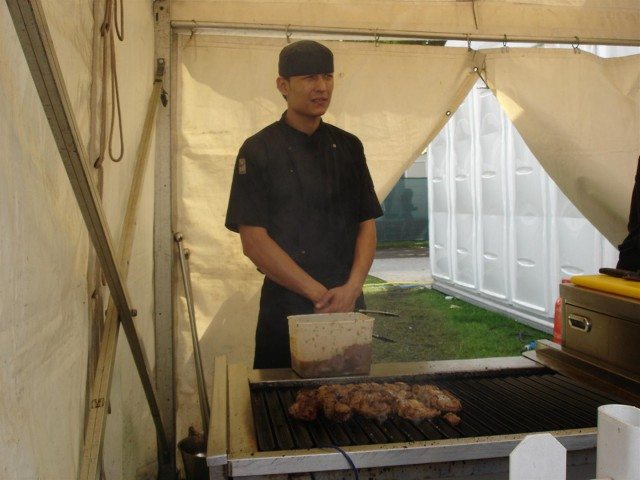 Let me just say, It Didn’t Disappointment. The chips were fat & crisp, while the fish was quite simply amazing, a crisp & plain salty batter wrapped around a tenderly cut, soft-yet-not-raw fillet. The only setback was quite small, which was that there were 3 people. So the moment we finished the last chip I didn’t hesitate even for a minute before going to the now slightly-more-crowded stall to get another helping.

The second helping satiated me for the time being & we decided to take a look around before jumping onto the next 2 items on my list, roast suckling pig & argentine steak.

There were some stalls which didn’t actually sell food to eat, but packed brownies, chocolate mousse, cookies, etc. there was even a stall selling frozen paranthas & naans. 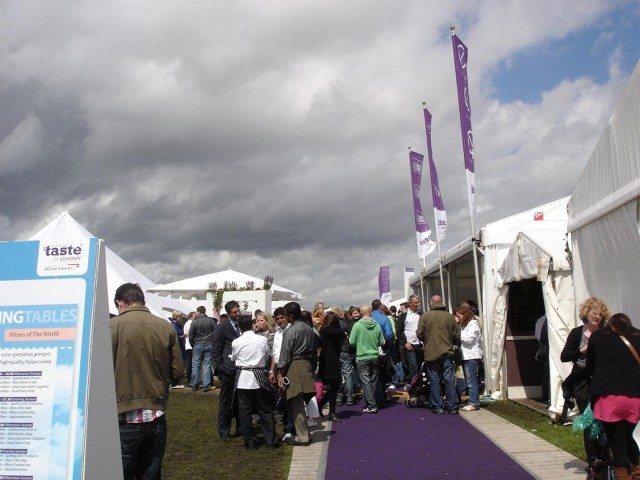 So while Mausiji & mom were tasting & buying the bread, spelt (type of bread) & all, I went about looking for something to quench my thirst. I took a whole lap of the place, but could only find 1 stall which had any type of non-alcoholic beverage, which was a stall promoting flavoured milk samples, or judging by the size of the teeny glasses, samplets. I tried to buy a bottle of that milk, but it wasn’t for sale, if you wanted any, you had to order the carton of milk online, as it hadn’t been “released to the supermarkets yet”.

It would have been at least 20 minutes, but I don’t think anyone really even noticed I was missing. They were busy deciding whether they wanted choco-chip cookies or cheddar sprinkled biscuits. 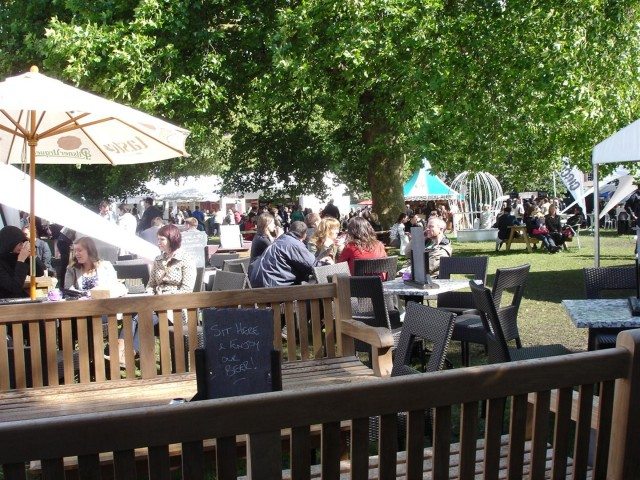 Taste of London - Sunny Side Up

We ‘utilized’ about 10 more minutes at that shop, before we were on our way again (and for the record we ended up picking both cheddar sprinkled biscuits & choco-chip cookies). By that time both my accompaniments had gotten thirsty, so they bought themselves some yellow-coloured, crushed ice beverage.

While wandering, we stumbled upon my Honey, who told us about the super-taster test at the BA stall, & since none of us were too hungry, we decided to head straight for that. There were two tests; one was to test your taste buds & the other your sense of smell. Apparently, our sense of taste and smell undergoes a change at higher altitudes. Well, mom & Mausiji passed, while I failed both.

Post that we were with my Honey for the rest of the day. She hadn’t eaten anything since morning, as most of the stuff in the stalls was non-veg, & she was a not-so-strict vegetarian. So we went about in search of vegetarian food. But, as each restaurant that puts up a stall is only allowed to sell four dishes, each joint would have picked their best selling dishes. And even though veganism is catching on, vegans are a pretty rare commodity, & only one vegetarian dish had made it to the best selling list of any of the restaurants, & that was Chaat Papdi, sold by an Indian restaurant called “Benares”. All of us headed there; there was quite a crowd, but I still made it out with 2 plates of chaat papdi in my hand. So, here I was, sitting in Europe & eating Indian food which under no circumstances would I have consumed in India. 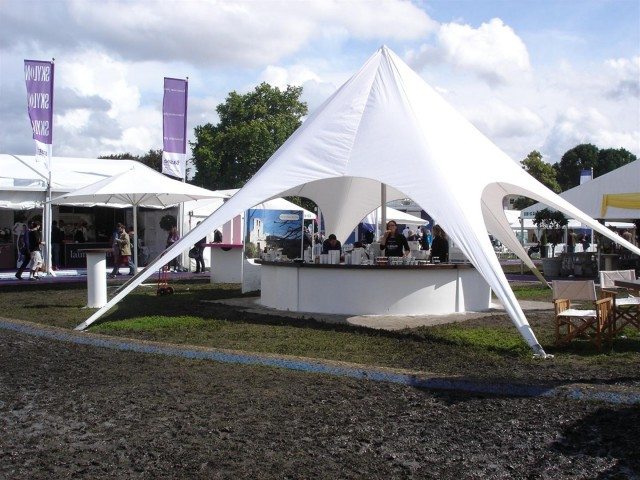 Why are people not at my stall

Anyhow, once Honey had eaten something, we headed off to the lounge. Halfway there I recalled that there were still 2 un-ticked items on my list, the roast suckling pig & argentine steaks. So I wasted no time in making my thoughts vocal, & we headed off back to the stalls in no-time.

The crowd by now was quite heavy, & only after a lot queuing was I able to get my hands on the pig. Plus it was drizzling on-and-off the whole day. Everyone was taking shelter under the little roofs of the stalls, & so the place was even more packed now.

I was quite peeved at the crowdedness of the place but all negative feelings got washed out with the first bite of that pork. It was done just the way I liked it, crispy on the outside & tender & juicy on the inside. In fact the outside was soooo crispy, I honestly doubted it was roasted. The helping wasn’t very small either, & by the end of it, I had no place left for the argentine steak. The roast had gone in & taken it all for itself, leaving my taste-buds longing.

But anyway, now we were once & for all, on our way to the lounge. We were all quite tired by then, & all we wanted to do was to plonk ourselves on a chair & relax. The lounge wasn’t too far away from the stalls area, & so we were plonked & relaxing in no time. I even got myself a beverage, & I thought to myself, life is complete.

My mom, Honey & Mausiji were to one side of the little tables, which was facing the sun & they were playing crocodile-crocodile (basking in the sun), while I was on the other side. We relaxed like that for about 15-20 minutes, before breaking up into a photo ops session & eventually a loooong conversation. We chatted around there till about 5pm, & left only because they had started shutting down the place. We got out of the park & onto the road, & the first thing I noticed was the condition of everyone’s shoes. The on-off drizzle had created a whole lot of mud in the park, & so by the time we got out, we had a 3cm thick layer of mud under our shoes …..and about ½ a kilo had seeped into mine.

But the mud wasn’t my cause of worry, it was the fact that these shoes would have to be washed & thus would be out of circulation for a few days, and the only other pair I was carrying was deep-purple in colour.

Post getting out we toyed around with the idea of going for a movie before heading home, but that plan got shot down before it even got out of the hangar, as everyone other than me was too tired. So, we hailed ourselves one of those classic black London cabs, & headed off to Liverpool street, from where we were to take the ‘Overground’ to Gidea Park & then home from there.

Mud in the Park

The whole journey took an hour & a half, through which we talked our hearts out & started making plans for the next day (Day 6). Honey told us that she was planning to spend the day with us, so we were quite excited.

Anyway, we reached home around 8:30pm. I had to put my shoes in the washing bin & brace myself for a couple of days of wearing my deep-purple shoes. We ate an early light dinner & chatted through the night & called it good night only after watching a few

What you all do during weekends? I generally prefer to explore a new place, food, or take my daughter to some new attraction where…