It was my fourth summer at Lucknow and my old friends would now know the reason of my annual pilgrimage. Last year i.e. 2009, we stayed at the humble and clean college guest house since our experience at Piccadily, where we put up in 2008 was not too super and it being so far from the main town, we decided in favor of logistics over luxury. Though the college facility was nice and refreshing, we were not too gung-ho about it. So when we came to know that guest house is full, we used the opportunity, valid enough to hunt for a good nice hotel. We were looking for a place which was not too far from the main town (Sorry Piccadily), not too expensive (Sorry Awadh Clarke and Taj), clean and new-world (sorry Hotel Gomti, we stayed there in 2007) and that it should have a nice bar. 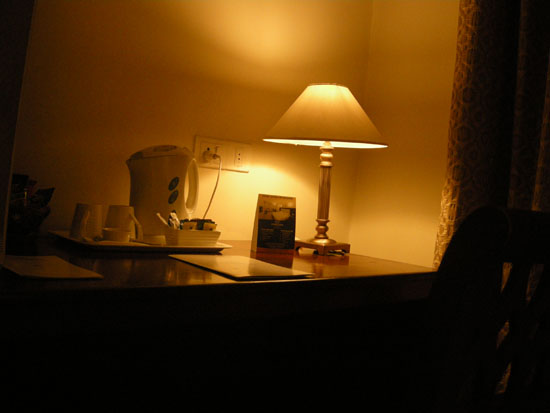 After a couple of recommendations, we found our way to ‘Sarovar Portico’ which is more popularly known as ‘Park Inn’ and here’s a small review of the place, along with photographs.

La Place Sarovar Portico is a hotel owned and run by the Sarovar Group. The same folks who also run ‘Park Plaza’ chain. From the prior good experience at one of their hotels at Mussorie (Park Plaza Sylvertone) we were already fairly impressed. There is one, on the way to my office, at Noida and my quickies there for the various lunches have been pretty decent so with that kind of legacy, I was looking forward to a good time.

Location
Its very well located, right in the heart of the city i.e. Hazrat Ganj. A stone’s throw distance from Sahara Mall. The postal address is 6, Shahnajaf Road, Lucknow 226 001.

Infrastructure
The facade of the building does not stand out, you may not be impressed as you step-down and head towards the front-office. After a very small parking, the front-office right is at the front-gate, overlooking the restaurant. The elevators are small and can not take more than 3 people at a time and you do not get the feeling of large open space. The place has about 50 rooms and a few suites.

There are few conference rooms and I was told that they can house 20 to 40 people, so probably a good place to do those mini-meets or off-site conferences for a small group. I didn’t discover the pool but it seems there is one and there is also a gym/health-club.

All in all, a decent infrastructure for the needs of a business traveler. 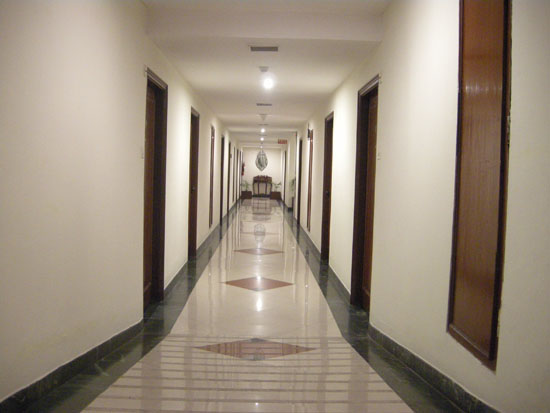 Rooms
We took something called ‘Executive Deluxe’ which was not their most expensive one but I remember that there is a non-Deluxe option too. It is a very usual up-market plush room, with a King Size Bed, two single-seater sofas and enough space to host a cosy conversation. The room size is pretty good. Though all the rooms are air-conditioned, I did find the lack of fresh-air a little suffocating, especially when you wake up and want to inhale some crisp-warm air of hot Lucknow.

Another view of room

The bathrooms are well equipped and very clean. The shower worked brilliantly and bed-sheets were indeed crisp. Top this with a TV, electric kettle, safe box and a mini-bar, you are fairly set to kill a lot of time. 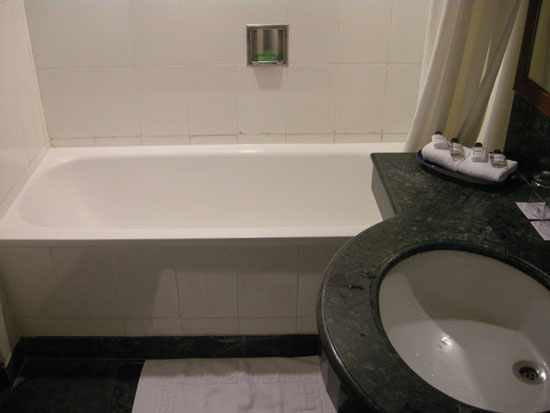 Housekeeping
Housekeeping was prompt. For the very small stay, we did need an electrician since we discovered that our electric kettle was faulty. It was restored in no time. No qualms.

We first went to Pavillion, hoping to get some chilled drinks. I do not remember on what transpired but we somehow didn’t find the stuff we were looking for or something similar. We were rather suggested to try the other restaurant, which was having Kebab festival. Ensuring that the super-mini elevator would be utilized to the full, we reached the terrace and could quickly sense that we made the right move. 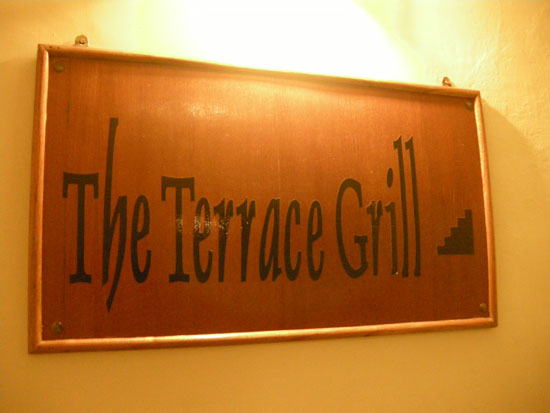 ‘Terrace Grill’ has a bar section hosting 4-5 bar stools and then there are tables in open with a canopy. After sitting at the stools for about 5 and 1/2 seconds, we decided to move to chairs. A very early morning flight and a hard long day was beginning to take its toll on corporate fragile bodies and it needed a rich round of drinks and kebabs, which it got. It was a buffet at a price of Rs 550 per person, we could eat as much as possible. The Kebabas were really delicious and at that price, it was a steal. 5/5

Next morning, we were to get our breakfast at ‘Pavillion’ and because of some confusion we reached there past 10.30 AM and they close at that time. Well, this was not the first time a guest has reported beyond the scheduled time and mostly hotel staff makes an effort to offer whatever best they could do. In our case, we were up for a surprise. 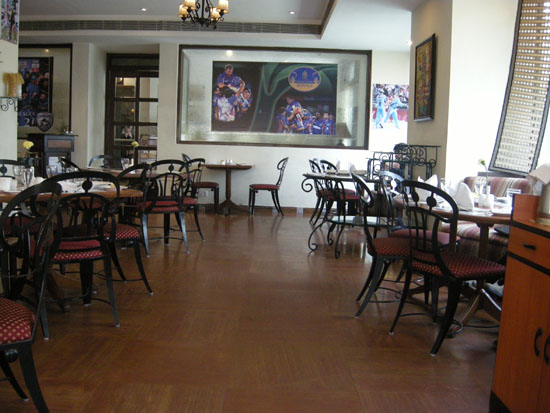 Before I go further down, let me take some time to write about the restaurant. Like most of the many places, this too was in IPL fever as well. With match fixtures donning the walls and special cuisines, we didn’t see many people. A well lit restaurant, with a very nice deco, it seems like a apt place for a early morning breakfast. While ‘Terrace Grill’ was more earthy, this one was bright and shining.

Anyway, a long face didn’t deter the staff much and though we were offered a customary, let me see sir what can I do, we didn’t see any visible action. So, we decided to grab whatever little was left or rather claim whatever little was being carried back to Kitchen. It was a pretty sad situation. And now as I think more, while writing, we were not even offered to order ala-carte. I am sure we would have loved to pay for our food. Had it not for the brilliant room, a super dinner we enjoyed last night, I would have been forced to get very nasty. Anyway, we moved on.

Tariff
Finally, the most important part i.e. Tariff. We got a double for 4.1 K INR and that sounds a little on the higher side considering that we were neither in a high-business-travel city (say Ludhiana, Indore etc) or a great tourist-travel location (say Goa, Agra etc).

Overall, I would give a very high rating of 4 out of 5 but beware of your wakeup time, the worse which can happen is to you would miss your morning breakfast.