So after seeing the wonderful Hindu Temple Lingaraj, Jain heritage caves and Buddhism Peace Pagoda we headed to Konark; place renowned for its beautiful Sun temple. (This post I feel is more of photographs rather than description)
1530 Hrs – We reached Konark and were very hungry. So we decided to take lunch at the restaurant at the car parking area. There is one problem at visiting Sun temple. Except Auto or some VIP four wheelers, other vehicles are not allowed in the vicinity of Sun temple. We finished our Lunch and took an auto from the Car parking area to Konark Sun Temple. The Auto person charged us Rs 40/-.
1600 Hrs – We entered at the Temple premises. There were many guides available to explain the details of the temple. The guide rates were also fixed, so no cheating business for hiring guide. We didn’t hire guide as before coming we already read a lot on all these places. But we realized our mistake lately as we saw guides explaining very nicely and clearly mentioning details on the construction of the temple .We purchased ticket from the ticket counter and moved further to see the magnificent structure. 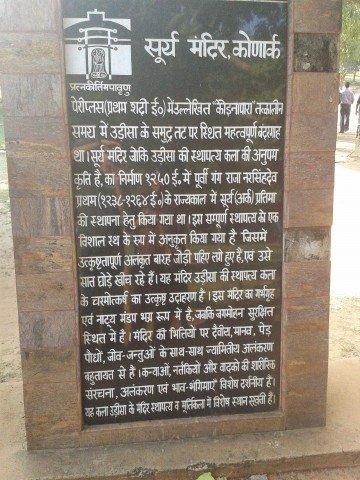 DESCRIPTION OF KONARK- IN HINDI 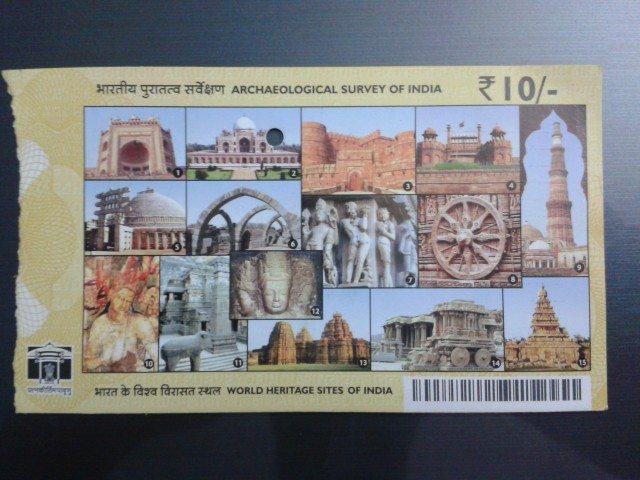 Konark Temple –  Konark Sun Temple is a 13th century Sun Temple (also known as the Black Pagoda), at Konark, in Odisha. It was constructed from oxidized and weathered ferruginous sandstone by King Narasimhadeva I (1238-1250 CE) of the Eastern Ganga Dynasty. The temple is an example of Orissan architecture of Ganga dynasty. The temple is one of the most renowned temples in India and is a World Heritage Site. It is one of the Seven Wonders of India (as per the poll collected by NDTV). Legend has it that the temple was constructed by Samba, the son of Lord Krishna. It is said that Samba was afflicted by leprosy, brought about by his father’s curse on him. After 12 years of penance, he was cured by Surya, the Sun God, in whose honour he built the magnificent Konark Sun Temple.

After walking for almost 02 minute’s pathway, we entered inside the temple boundaries (Where our tickets got checked).The first structure right in front of us was Natya Mandir. The entrance to Nata Mandir has a huge lion statue on both sides. If we see these statues by going closer to it we will found that it is not the statue of just a lion. It is a giant lion over elephant and under elephant foot is a human body. The entire statue is in one stone. It is of 8’4” length, 4’9” breadth and 9’2” in height. Very beautiful statues and it was a good start for us that we should see the temple in detail. 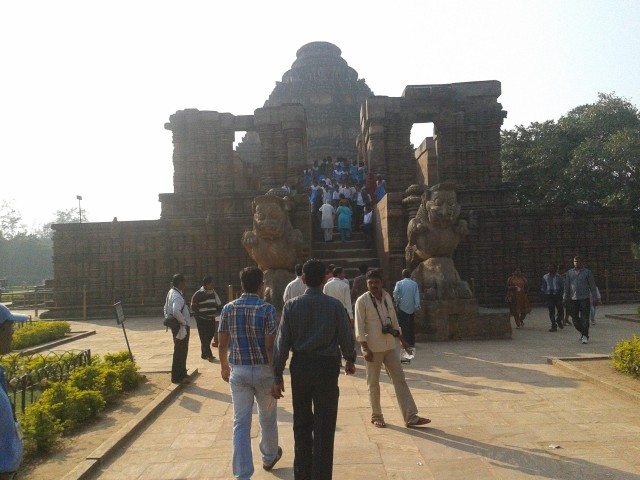 After climbing up at Natya Mandapam and then climbing down from its elevated area we saw beautiful Konark temple in front of us. As lots of restoration work is carried on at this temple, three of its sides were covered with massive iron scaffolding. Thus one can see the temple either from Ground level or just a front face at the first level. It was mentioned at the first floor that as the temple was getting damaged; the inside of the temple is filled with stones so that it can stand for more and more decades. 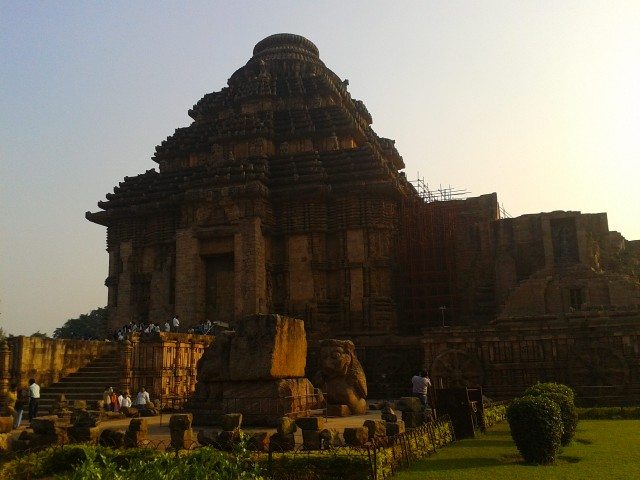 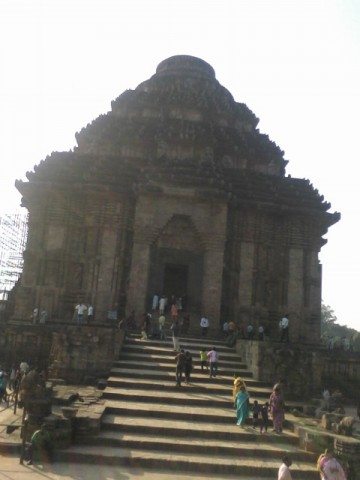 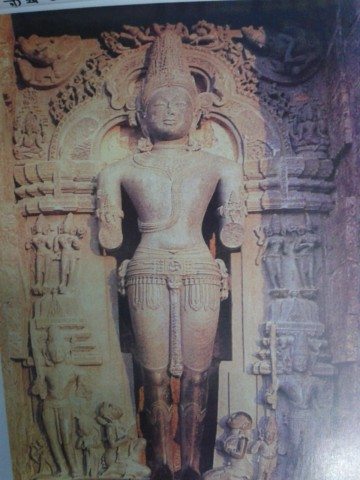 SUN GOD(Photo taken from a book purchased at Puri)

Next we saw the most famous wheels of the temple. The Sun temple was constructed as Chariot of Sun God.24 wheels have been affixed to the platform. Each wheel is 9’9” in diameter having 8 spokes. The 24 wheels represent 24 hours and 8 spokes represent 8 prahars (3 hours) of a day. The wheels are so beautifully made and each signifies different prahars. Thus each wheel has different carving depends on the activities performed at the particular prahar. 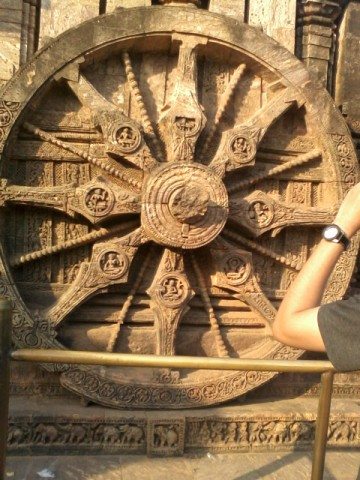 The next art form we saw was the war horse. There are two gorgeous war horses on the southern side of the temple. They are each 10 feet long and 7 feet high. This figure of war horse of Konark has been accepted as the symbol of the state government of Odisha.

Then we roam around the temple once again appreciating the work of 1200 architects, who all worked hard for 12 years, utilizing 12 years state revenue to build these 228 feet high majestic structure. We also got our pictures clicked from the photographers present inside the temple complex. 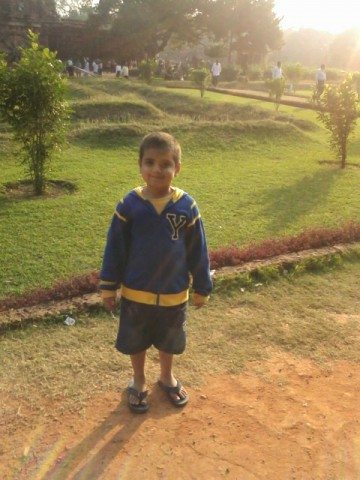 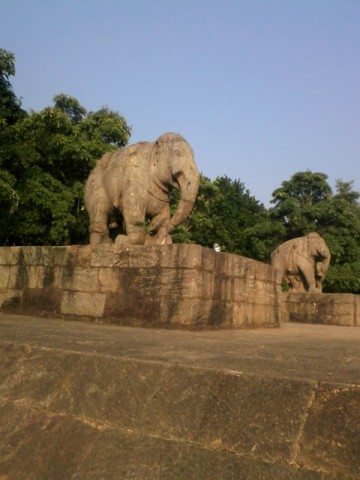 Here I am mentioning little more about Konark temple taken from Wikipedia:
A regards to Konark temple architecture, the temple takes the form of the chariot of Surya (Arka), the Sun God, and is heavily decorated with stone carving.] The entire complex was designed in the form of the God’s huge chariot drawn by seven spirited horses on twelve pairs of exquisitely decorated wheels at its base. The huge wheels carved at the base of the temple are one of the major attractions. The spokes of the wheels serve as sundials and the shadows cast by these can give the precise time of the day. The pyramidal roof soars over 30 m (98 ft) in height. The entrance is guarded by two giant lions, which are each shown crushing a war elephant. Each elephant in turn lies on top of a human body. The temple symbolizes the majestic stride of the Sun God. At the entrance of the temple is a Nata mandir. This is where the temple dancers used to perform dances in homage to the Sun God. All around the temple, there are various floral and geometric patterns.

“The Sun Temple, built in the thirteenth century, was conceived as a gigantic chariot of the Sun God, with twelve pairs of exquisitely ornamented wheels pulled by seven horses. Majestic in conception, this temple is one of the most sublime monuments of India, famous as much for its imposing dimensions and faultless proportions as for the harmonious integration of architectural grandeur with plastic allegiance. Every inch of the temple is covered with sculpture of an unsurpassed beauty and grace, in tableaux and freestanding pieces ranging from the monumental to the miniature. The subject matter is fascinating. Thousands of images include deities, celestial and human musicians, dancers, lovers, and myriad scenes of courtly life, ranging from hunts and military battles to the pleasures of courtly relaxation. These are interspersed with birds, animals (close to two thousand charming and lively elephants march around the base of the main temple alone), mythological creatures, and a wealth of intricate botanical and geometrical decorative designs. The famous jewel-like quality of Orissan art is evident throughout, as is a very human perspective which makes the sculpture extremely accessible. The Main Sanctum which (229 ft. high) was constructed along with the Audience Hall (128 ft. high) having elaborate external projections. The Main Sanctum which enshrined the presiding deity has fallen off. The Audience Hall survives in its entirety, but only small portions of the Dancing Hall (Nata Mandir) and the Dining Hall (Bhoga-Mandap) have survived the vagaries of time. The Temple compound measures 857 ft (261 m) by 540 ft (160 m). The alignment of the Sun Temple is on the East-West direction. The Temple is located in natural surroundings, abounding with Casuarina plantations and other types of trees such as mahogany, rosewood, eel which grow on sandy soil”

So we happily came out of the temple, took an auto to reach back to car parking.
1700 hrs – We headed towards Puri. Within half an hour we reached at Chandrabagha beach. As we have seen many beaches at and around Chennai, we were not very keen on spending time at the beach. We spend 5-10 minutes at beach and returned to car to reach PURI. 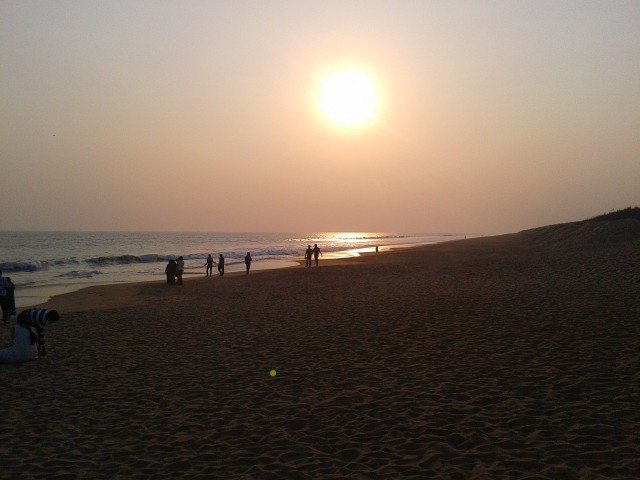 On our way we gave call to Dipa da (Panda ji) and he has brought the dry bhog (Prasad) for us.
PS: Most of the details taken from Wikipedia and the book I had purchased at Puri (no details of publisher mentioned in the book)
*Post title taken from a famous book on Konark by K.S.Behara.

Konark – The Heritage of Mankind was last modified: April 10th, 2021 by Abhee K

On the way… We readily agreed when Chandan, one of our friends invited us to Dudhwa Tiger Reserve Forest. Another friend Agni and his…