We managed a full week break (09 days in effect, Saturday to next Sunday) thanks to the rare confluence of three variables, Mine & Sharmi’s  leave and Deboshmita’s school holidays. Having covered Kumaon (Nainital/Almora) in the last trip (Dec 09), we did not want to repeat Uttaranchal. In Himanchal, since the usual destinations were already covered, we scouted for some less travelled ones.

And there it was – Kalpa, Sangla and Chitkul.

For the uninitiated, they are part of Kinnaur district of HP. Kinnaur has been glamorised by travellers across the ages for its beauty; scenic as well as human. The place supposedly finds mention in our traditional scriptures (purans / upnishads) also. 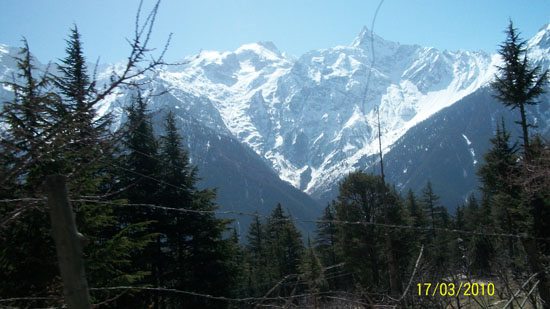 After much chaos, confusion and confabulation (the scene repeats unwaveringly, every time) we managed to start at 8.00 am from New Delhi on Saturday (Day 1). Drive to Chandigarh on the silky NH-1 is always a source of joy. Exit from Delhi was hassle free, without much hindrance. Zirakpur (at about 230 kms from NDelhi), short of Chandigarh, is the point from where you take a right turn (from under a flyover), to head towards Shimla (else, you would enter into Chandigarh). We were at this point by 1.00 pm. A much vaunted point on the route is the tourist complex in Karnal, midway between Delhi and Chandigarh. I personally have never visited the place, so cann’t really comment.

Roadside landscape after Ambala was dotted with orange/juice stalls (even in March); a feature that typifies Punjab (and bordering areas of Haryana).

The stretch from Zirakpur to Kalka, which was witness to construction activities in the past, appears to have improved. A constant, steady drive on this road is now possible till Kalka.

Kalka is a chronic bottleneck on the way to Shimla. While doing time calculations, it may be prudent to keep aside 1-1.30 hours for traversing the narrow road across Kalka. Good part, however, is that you can really enjoy the earthly flavour of Punjab/Haryana while creeping at a speed of about one millionth kmph, the shops and crowd passing by your elbow, unmindful, busy in the chores. 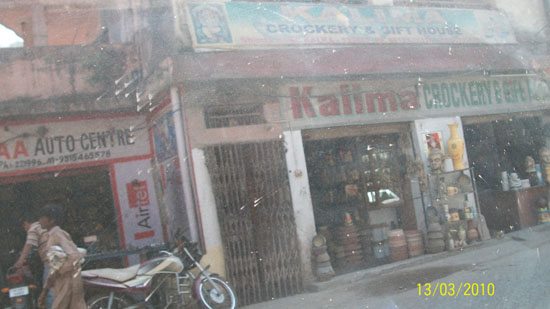 Kalka transforms into Parwanoo (HP side of the state boundary) almost suddenly. It also marks an abrupt change in terrain.

Drive up to Shimla (2100 mtrs ASL) was again effortless, thanks to the wide, well paved roads. One can make a quick tea stopover at Solan viewpoint, situated before Solan. Before entering Shimla, I took the bye-pass to skirt the tunnel/congested lift area of Shimla. On the bypass, after travelling 2-3 kms, upon enquiry about directions, locals warned me against taking the bypass. It supposedly entails longer road of lesser quality. Heeding to their wisdom, I turned left into Shimla and hit the circular road near Secretariat, at around 03.30pm. Shimla has been covered later, during the return phase. 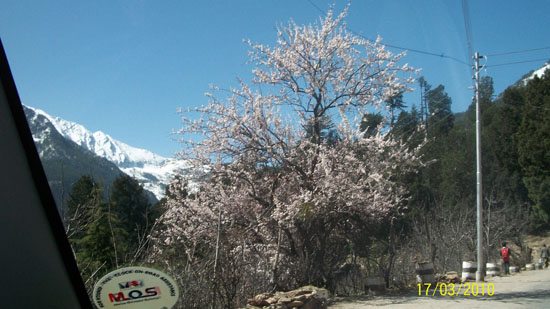 Thereafter, through Sanjauli, we headed out of Shimla towards Kufri/Fago/Narkanda, on NH 22.  While crossing Kufri, to our surprise, we located ice chunks along roadside. 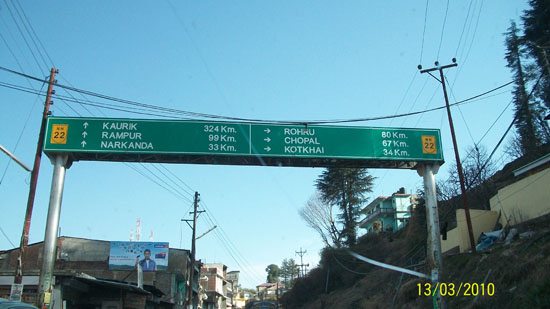 The scene periodically continued till Narkanda. Road from Shimla to Narkanda is wide and well paved, perhaps just a shade less in quality than that upto Shimla. 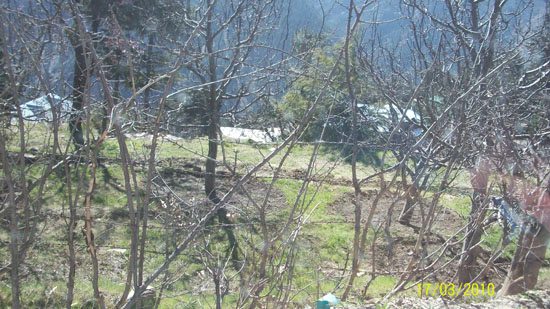 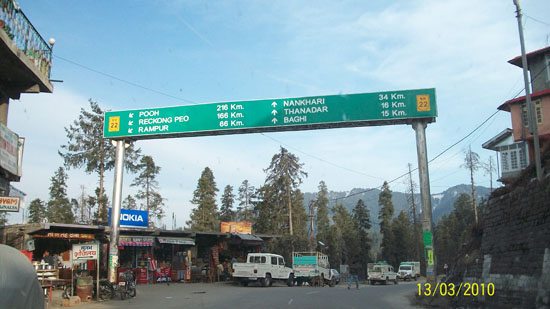 We were in Narkanda at around 05.00 pm; our halt for the day. It is a smallish hill station centred on NH 22. Hotel Mahamaya, right on the bus stand, did not look very inviting, so we decided to stay in HPTDC Hotel Hatu, a 02 minutes uphill drive just above the bus stand. Hatu commands grand view and offers ample parking, along with facilities viz, operational restaurant, clean rooms, heater/geyser etc. Night temperatures in Narkanda hovered to 3-5 Deg Cel. The Rs 1700/- room cost around Rs 1500/- after discount, and while leaving the next day morning before breakfast, my purse was lighter by approx Rs 2000/-, the amount being inclusive of dinner in the restaurant.

Left Narkanda at 9.30 AM. Main station ahead is Rampur, where we tanked up the car, since we were not sure of petrol pump status ahead. Had very tasty paraths/rajma breakfast-cum-lunch in Jeori, about 100 kms beyond Narkanda, at around 1.00 pm. Hereafter, the roads turn narrower and lower in tar quality. We were upbeat about impending entry into Kinnaur. Places named Wantu, etc en-route aided in conjuring a Tibetan flavour. 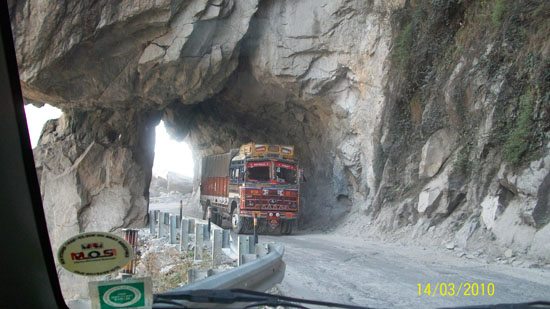 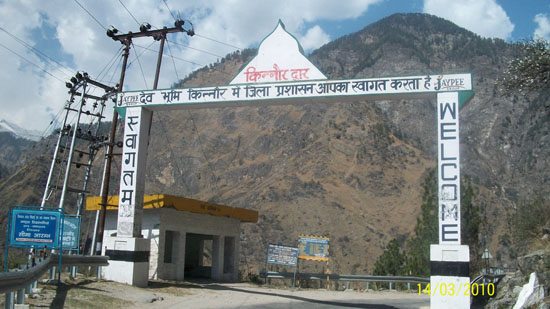 At around 2.00 pm we entered Kinnaur, through the PWD variety cement arch reading ‘Welcome to Kinnaur’. The roads continue to deteriorate in terms of crust, but are generally wide enough to allow two vehicles cross each other comfortably. The scenic beauty is bewitching. You have Satluj flowing past and simultaneously steep rocky mounts rising all around. On this stretch, one gets the first glimpse of Kinner Kailsh, snow clad and becalming. The stretch also merits mention because you come across a typical barren rocky landscape for a while. The sheer bald Himalayan rocks swooping from all around and Satluj flowing down there somewhere, creates an impressionable effect. Sharmi was going wild with the camera.

After this comes the horrendous stretch. Thanks to a series of hydro-electrical projects/ dams being created on the Satluj, the road turns into admixture of dirt track, pebbled/potholed/slushy pathway with dust and grime around and heart-rending jolts from down under. 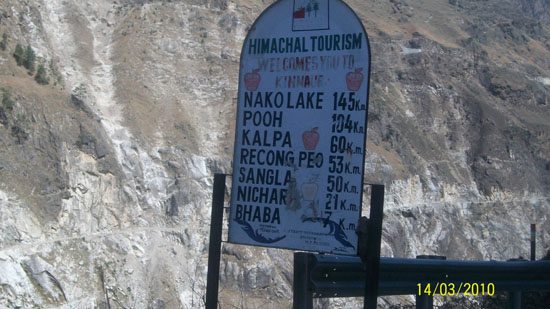 The primary site is Karcham, a point from where a diversion takes you to Sangla valley. We kept moving ahead on NH22, towards Kalpa/ Rekong Peo. The tough road scene continued well after Karcham, till perhaps Rekong Peo. Rekong Peo (locally known as Peo), is the district headquarters of Kinnaur. From here, a road branches out from NH22 to Kalpa (the NH leads further ahead towards Pooh and beyond into Lahaul/Spiti).

Peo is a nice, magnificent hilly place with reasonable activity. The snow-capped peaks were visible all around. Road from Peo to Kalpa (a 7 km stretch) is well paved, offering an enjoyable 30-40 min drive. We were in Kalpa by 5.00 pm. 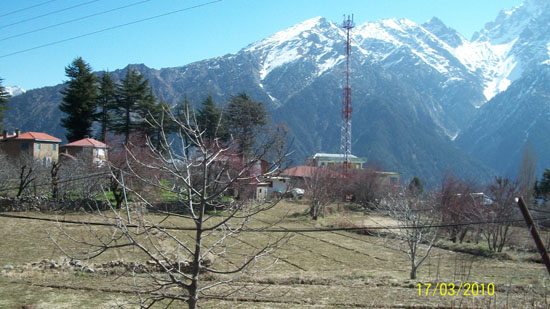 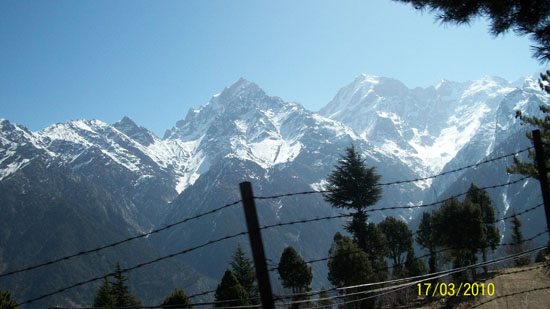