Why Keylong?
It is an ideal destination for nature lovers and adventure freaks. The place is full of breathtaking landscapes, the enchanting rives, snowcapped mountains complimenting the blue sky, time stopping silence and pleasant weather, in short nature’s untouched beauty and incredibly attractive. Plains look so beautiful that one may feel himself in a Heaven. All around the area is covered by Highly Mountains beside flat lands and green meadows. It gives you the pleasure to feel yourself close to the nature. Here, the Air is liked iced champagne and the skies are an eternal blue

DAY ONE 21.06.08 (Saturday)
We Started our journey from Delhi, at 0010 hrs and reached smoothly till the By-pass near Azadpur only to find a jam on the road opposite Nangli Poona village from which it took about fifteen to twenty minutes to emerge clear. The highway till Chandigarh was hassle free. There were four to five flyovers under construction, which, once completed would make the ride even smoother and cut down time considerably. 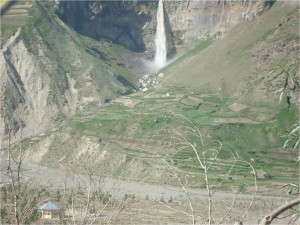 DAY TWO 22.06.08 (Sunday)
Reached Chandigarh at about 0500 hrs but could not find any place to get relieved and freshen up as had been planned and so, continued the journey. Once we reached Kiratpur Sahib, mountainous region started. Near Bilaspur there was a jam for about half an hour. There was heavy movement of trucks around Bilaspur because of cement factory in the vicinity but most of the truck drivers were cooperative and had good driving sense, unlike Delhi.
Just as we were wondering whether we would ever be able to find a public toilet near road or one in an eatery, we saw a petrol pump. The vehicle was in need of petrol too. We just casually asked an employee of the petrol pump if there was a toilet in the building premises and he said “yes”. Stroke of luck, all freshened up one by one. Toilets are a big problem on this route, you consider yourself lucky if you find one on the route.
We reached Mandi at about 1400 hrs and had our lunch there. The drive from Mandi to Manali via Kullu was smooth and traffic free. There was a dam (Pandoh) near Mandi en route to Kullu which is worth seeing but photography was strictly prohibited there. On our way from Mandi to Kullu, we had to cross a tunnel on the way. This tunnel is about 1.9 Kms long and has got emergency exits in between. Once inside, one seems to have entered a cave lit by dim lights.
We reached Manali at 1800 hrs and stayed in Hotel Kunzum, one of the best hotel in Manali. There are other good budget hotels available in Manali on the Mall road itself. These hotels cost you anything between 250 to 500 during off season and 500 to 700 during peak season. Mall road has now been made a no traffic zone so you can enjoy a walk on the road, which is usually crowed during peak season.

Manali to Keylong
From Manali, one has to cross Rohtang Pass in order to reach Keylong. There are buses and taxi services available from manali. On one’s own, one should preferably travel in an SUV or any 4X4 vehicle as the terrain is very rough and avoid traveling in a small car like Alto as we did. But to our surprise most of the four wheelers we found in Keylong were either Maruti 800 or Omni (Van). The driver should be an experienced hand in driving on such hilly terrain. People have good traffic sense here and they don’t honk and overtake unnecessarily and dangerously. Enough warm clothing should be carried along so as to meet any emergency in case of sudden change of climate.
We started our journey to Keylong at around 0900 hrs. Due to heavy rains, roads were badly damaged and repair work was being carried by GREF and due to this there was a heavy jam. Hundreds of vehicles were stuck enroute to Rohtang. A woman in one of the vehicles coming from the opposite direction lamented vehemently that they had been waiting for six hours and now were returning as there was no scope to move forward. We decided that we would rather wait than return. The hawkers made merry, selling eatables, jewellery, handicrafts, herbs, et al. After about an hour, we reached a spot that was the cause of the jam. A steep curve that was under repair was quite difficult to negotiate. We reached the top of Rohtang at around 1600 hours; it means that we covered 52 kms (from Manali to Rohtang) in 7 hours, which on any other day would have taken not more than 3½ hours. Rohtang appeared quite dull as compared to what it earlier used to be. There were patches of snow here and there and due to pollution even snow had turned grayish. We stopped for a while and resumed our downhill journey towards Keylong. Clearly, today’s Rohtang Pass is a poor shadow of what it used to be earlier. Soot emitted by tourist vehicles and trucks and global warming has evidently taken its toll on the snow. 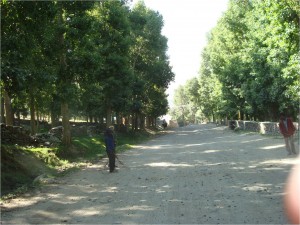 Journey from Rohtang to Keylong is downhill all the way. The immediate stretch of road from Rohtang towards Keylong was also in bad shape. Accommodations were very limited at places like Losar, Kaza and Tabo enroute. On the way, after an hour’s journey, we reached the village called Khoksar which was really just a bunch of dhabhas and a police station put together. It is after Khoksar that the best part of our journey began when we entered the Chandra valley. The valley is completely barren, flanked by dry, snow-capped mountains on either side. On the sides of the road, you can see hills covered with masses of snow. It is almost that a gush of water was flowing down the mountain in its full glory, when someone lifted a finger and said: Statue. And the water froze midway, without getting a chance to settle down.

We went through the lonely and lovely journey full of breathtaking landscapes, snowcapped mountains and time stopping silence crossing several villages, mountains, bridges, bad and good stretches of roads for three odd hours before we reached Tandi, where we got the car tank filled. It is the last petrol pump till Leh. By the time we reached Keylong, it was 1930 hours. But to our surprise, even at that time, sunset had not happened. By 2000 hours, it finally occurred. The chilly winds of Keylong rejuvenated our moods and we refreshed ourselves. We had our bookings in PWD Guest House. The Guest House was a pretty decent one and the rooms were cosy, neat and tidy. There are other good budget hotels in Keylong. Occupancy is very low because only foreigners or adventurous tourists like us visit this place.

FOOD: Keylong has few restaurants and dhabas where though one can find North Indian Food also but not each and every North Indian dish is available there. Momos in Keylong are a must to taste and relinquish. Especially the Momos chutney is soooooo….. tasty that one will surely miss that when one goes back from Keylong.
DAY FOUR & FIVE24.06.08 (Tuesday) and 25.06.08 (Wednesday)
We walked on the majestic bank of wild grass which was full of music. We lay down on the grass under trees, listening to the murmur of the water, and watching the clouds float across the sky. We climbed the hilly terrains and got their good tidings. Nature’s peace had flown into our souls as sunshine had flown into trees. The winds blew their own freshness into us. Keylong is a perfect vacation destination. One can find a plethora of small and large waterfalls amidst this valley where the crystallized water flows. One can find a perfect peace away from our hectic schedule of life. Keylong has also Buddhist Monasteries to be visited. Kardang, Shasur, and Tayul monasteries are a must to be visited. Besides, one can experience a beautiful landscape in this valley of Keylong.
Near Tandi, there is a bridge (Thakur Devi Singh Pul) and after crossing that bridge there is a beautiful place on the bank of river. We sat down on the sand, feeling like VIPs coz no other soul was present there. As if the whole of bank had been booked for us. While resting there, we saw a group of around 25-30 foreign adventurous tourists traveling on motor bikes one after another going towards Leh. The sight of these foreigners including female drivers on their powerful bikes equipped with petrol cans, beddings, tents, etc. whizzing on the rugged track raising clouds of dust was just like a scene out of a Hollywood movie.

DAY SIX 26.06.08 (Thursday)
Return journey to Manali was smooth and we left for Manali at 0800 hrs and reached there at 1400 hrs.
In the evening we saw folk dance being performed by men and women in very colourful traditional dresses on the mall road from balcony of our hotel.

DAY SEVEN 27.06.08 (Friday)
Started return journey from Manali to Delhi at around 0900 hrs in the morning. On the way, after crossing the tunnel, we clicked some snaps of wonderful waterfalls and green mountains. The rain had washed the dust and soot off the tree leaves, if there would have been any, making the mountains look greener. There is this uncanny similarity between these mountains and those in Arunachal Pradesh and other areas of the North-East, more so during rainy overcast conditions, vegetation and trees being a bit different, causing a dejavu.
We did not face any problem on the way and reached Delhi at around 0100 hrs.