One afternoon, my manager told me about an upcoming trip to Brazil. When I told the news at home, pat came the home-ministers reply “I knew it, you are all going there for the Carnival”. Ignoring the complaints from the ministry about not taking the entourage (family), all 3 members of our team started preparing. Collecting whatever information we could, we started for the airport. During the long and boring taxi ride, we finally checked our tickets, and finding that none of us were in the same row (in the plane, of course), were surprised. At the check-in counter, we instructed the young lady to change our seats so that we would be sitting together. Since she was too busy in chewing the gum, we tried to disturb her as little as possible. After an eternity, she nodded in the affirmative (or so we thought) and smartly asked us to keep the baggage together so that she could weight it, and attach it to a single ticket. She accepted our thanks gracefully, and we ran for the boarding gates. Upon reaching there, we finally tried to align ourselves with the new seat numbers. To our amazement, we found that we were still sitting separately, while our baggage had been made to sit together. Little did we realize that the fun had already started!

The topmost item on our agenda in Brazil was to get some local currency. We converted some cash and then started experimenting with the ATMs to see if they could understand our English-speaking credit cards. After spending some time in trying to accomplish this feat, we decided to dart towards the hotel; and then we saw Brazil. What we were expecting was a developing country with India-like infrastructure. What greeted us were lush greenery, modern architecture and clean cars, running with the right traffic sense.

With a much improved impression of the Brazilians, we reached the hotel and explained the receptionist about our intentions for the next day. He nodded that he had understood everything and would order a taxi for us early morning. Exhausted, we retired for the day. Next morning, we boarded the taxi and within 15 minutes found ourselves at another hotel. Painfully we explained the cabbie where we wanted to go. The driver nodded, and again we started off. After 10 minutes, we realized that we were going away from the desired hotel. We tried to teach the good fellow some more English, and finally he brought us to our correct destination.

Since we were already late, we rushed in. The porters were surprised to find 3 foreigners, who were more interested in entering the hotel, rather than relieving their pockets of some loose change. Not to forego some of their daily earnings, they forced the cabbie to open the boot. Disappointed with the contents of the boot, they let us in. Passing through the various halls of the 5-star hotel, we started wondering if we were in the right place – 3 “Gringo’s”, among hundreds of Brazilians, who had nothing but beer in hand and music in their heads.

Finally we located our destination (the meeting room); and joined in. After a short while, our counterparts declared it was time for lunch, and took us to a buffet place. It was loaded with king prawns, queen crabs and knightly oysters, all available for the price of peanuts. All you were supposed to do was load the plate, weight it, and start eating. Everything was at the same rate, by the kilo, and the max you had to pay was for 500 grams. While some of us had a great time, the poor veggies had to manage with salad, fries and shake. The day ended; and sleepy after eating so much during lunch, we decided to skip dinner.

Finally the weekend arrived, and it dawned to us that we didn’t have a plan. So we created one to visit Christ (The Redeemer, not the real one). However, Christ didn’t like the idea and sent the rains to dissuade us. We decided to obey the wishes of the Almighty, and agreed to visit him during our next trip. That left us with plenty of time, so we decided to do some souvenir shopping. We trotted off in the direction of the city center, and after walking 2 kilometers in a circle, discovered an Indian restaurant close to our hotel. Adding this valuable piece of information to our ever expanding database, we called a taxi and spent the next 2 days looking for a souvenir. We found an extremely beautiful one in Pizza Hut, who was overjoyed that finally somebody could test her English. Due to the laws imposed by the (home) ministry, we could not bring home such a souvenir. So we kept hunting, and also kept wishing for the call from airlines informing us that our return flight had been cancelled, and that we would have to stay for another day in Brazil. (We were desperate to grace Rio (read: Carnival) with our presence.) The cancellation was impossible, so we decided to go to the practice sessions of the carnival, and decided to take some help from the hotel receptionist. No sooner did we enter the hotel, he saw the grin our faces, and wished that mother Earth would swallow him. However, he wasn’t so pure after-all, and Earth refused to grant his wish. We went to his desk, snatched the keyboard, and hammered away the question (on Google’s translator, of course). He got the point, and after exchanging some more sentences through Google, made the arrangements. The arranged taxi took us through some dark and deserted streets, where business-women in short skirts were just beginning their day; and brought us to another shady place, which had no signs of a rehearsal. We chanted the security mantras which we had crammed (from the internet), and without batting an eyelid, ordered the driver to take us back straight to the hotel. 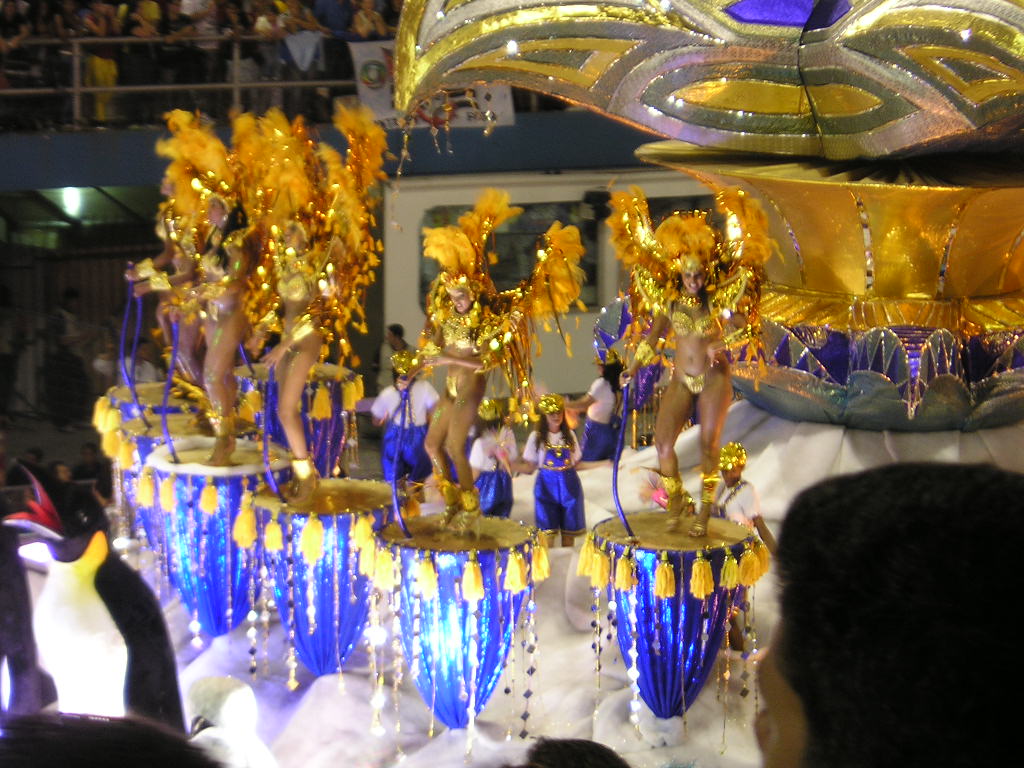 All this time, He had been watching us from his heavenly abode above, and realized that we were good people, and wouldn’t commit any sins, even if tempted. So He rewarded us by disclosing the fact though the celebrations are held for a week, the main carnival night would take place just before our return. This new piece of information sent us scurrying for the tickets. We kept on planning to buy the tickets, and by the time our planning ended, so did the sale of the tickets. Not letting fate play such a cruel joke, we finally acknowledged that even black marketers have mouths to feed at home. However, we didn’t want the back market to prosper, so we reached the stadium 2 hours before the carnival start. We bargained hard and agreed to pay only 50% extra for the adult ticket. However, the black marketers are made up of a harder substance, and they sold us the half-price-child-tickets tickets for the already agreed price. Once inside the stadium, we grabbed the location with the best possible view. We then spent the whole night trying to fully absorb the grand celebration of the beginning of Lent.

Back home, when I showed the photos, the home-ministers’ only comment was “I knew it, you all went there for the Carnival”.

* A foreigner in Brazil is called “Gringo”.
* “Christ, the Redeemer” is in Rio, and is one of the Seven Wonders of the World.
* Lent is the forty-day period of fasting and prayer before Easter.

A trip to Brazil was last modified: August 17th, 2019 by Neeraj Jain

Neeraj loves watching discovery channel and reading mystery novels. He also writes (infrequently these days) under various pen-names. He has travelled to various countries all across the globe, and his goals keep changing in life. Last year it was to be a financial planner. This year it was to be a chef. He is now thinking about becoming a musician. His final aim in life is to become a monk and settle down in some remote cave in the Himalayas.