Due to my job, I have to remain out of India, most of the times.  I normally get a break and come to India for two years and these two years, I spend in exploring Himalayas.  Earlier in 80s, it was with Bajaj super scooter and now it is with car.

My friends normally wait for my return, because I always come with names of new places to visit and they wait anxiously for their new adventure.  This time we decided to visit Kali Mathh in Uttranchal. Kali mathh has a great religious background.  In Durga Saptshati, when Kali killed Raktabeej and Shumbha Nishumbha, her anger did not subside even after war was over.  Her energy was destroying everything in the way.  All gods were worried and requested Lord Shiva to calm her down.  He lied down in her path and the moment she was about to put her feet on his chest, she realised her mistake and cooled down ( many photos of Kali you might have seen in this posture).  Shiva asked Kali to cool down and use her awakened energies for the benefit of humans.  Kali, the raw energy, entered the earth making a hole in the rocks.

Kali Mathh is the only hindu temple, where they dont worship any pindi or any idol or photo.  It is only that hole which Kali caused, which is worshipped here.  All Shaktas at least once in their life, visit this place, specially Bengali Shakta followers. Even if you do not have deep religious appetite, the place is so beautiful, untouched by tourists and civilisation, that it would be a mistake not to have visited there by anybody loving Himalayas.

So in a wintery Feb,2010 I fixed programme with my childhood friends, Pradeep, Awasthi and Vijay to be ready for a surprise visit ! We started from Delhi early morning around 5 am and crossing the usually jammed roads, in the fastest way possible and reached Haridwar around 9.  Taking a quick dip in Ganges, we continued our journey uphill and next stop was at Devprayag.  You all know it is from Devprayag that the name Ganga starts, after Bhagirathi meets with Alaknanda.  We stopped for a while for “Pind-daan” of my father who died 2 months before. 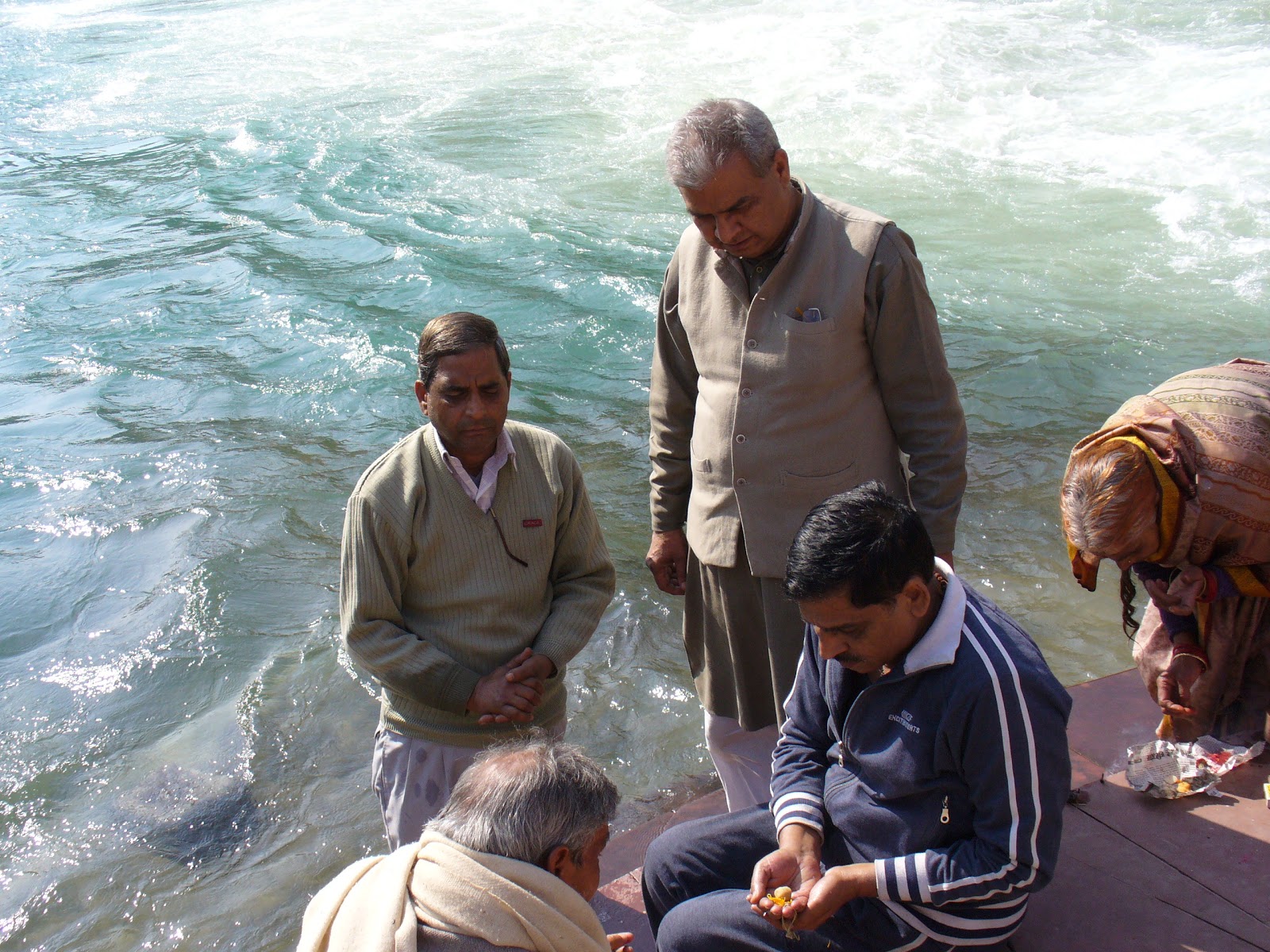 You can see clearly the different color of water from Alaknanda and Bhagirathi.Taking breaks in between and halting at some places due to land-slides, we reached Rudraprayag from where one road goes to Badrinath and the turn on left, having old iron bridge, goes to Kedarnath.  We turned our car towards Kedarnath and reached Gupta Kashi in the evening.    Just entering the city we found our tyre flat.  Either due to non-yatra season, or due to local holidy, all the shops were closed. Luckily we saw one tyre shop open 100 meters away.  Awasthi went to the shop and asked the boy if he could repair a flat tyre.  The boy very rudely told to bring the wheel there and also warned that he will only repair tyre and will not unscrew the wheel or will not fit that after puncture repaired.  This was very odd as normally Garhwalis are very helping.  I think he was a new college drop, whose father forced him to open this shop so he was earning for the family, but keeping his attitude intact. Anyhow, we had our hands blackened and the car was ready to go further.  We reached the city center.  Since it was not a Yatra Season, GuptaKashi was a sleeping town, with most of the hotels closed.After long search, we could persuade a Nepali boy to open a room of his hotel for us, enabling him earning some extra money.  The same boy brought food from a near by shop.  The food was very cheap but delicious.

Next Morning, we were ready by 8 to go to Kali Mathh. We u-turned our car towards Delhi and started our descent on the same road where we had come from.  One Kilometer before Gupt-kashi there is a turning on the right hand (if going to Gupta-Kashi), with a faint board indicating way to Kali Math.  Obviously we missed the turn and after about 4 Kms, reversed our car, this time all of us watching for the board and voila we got it. 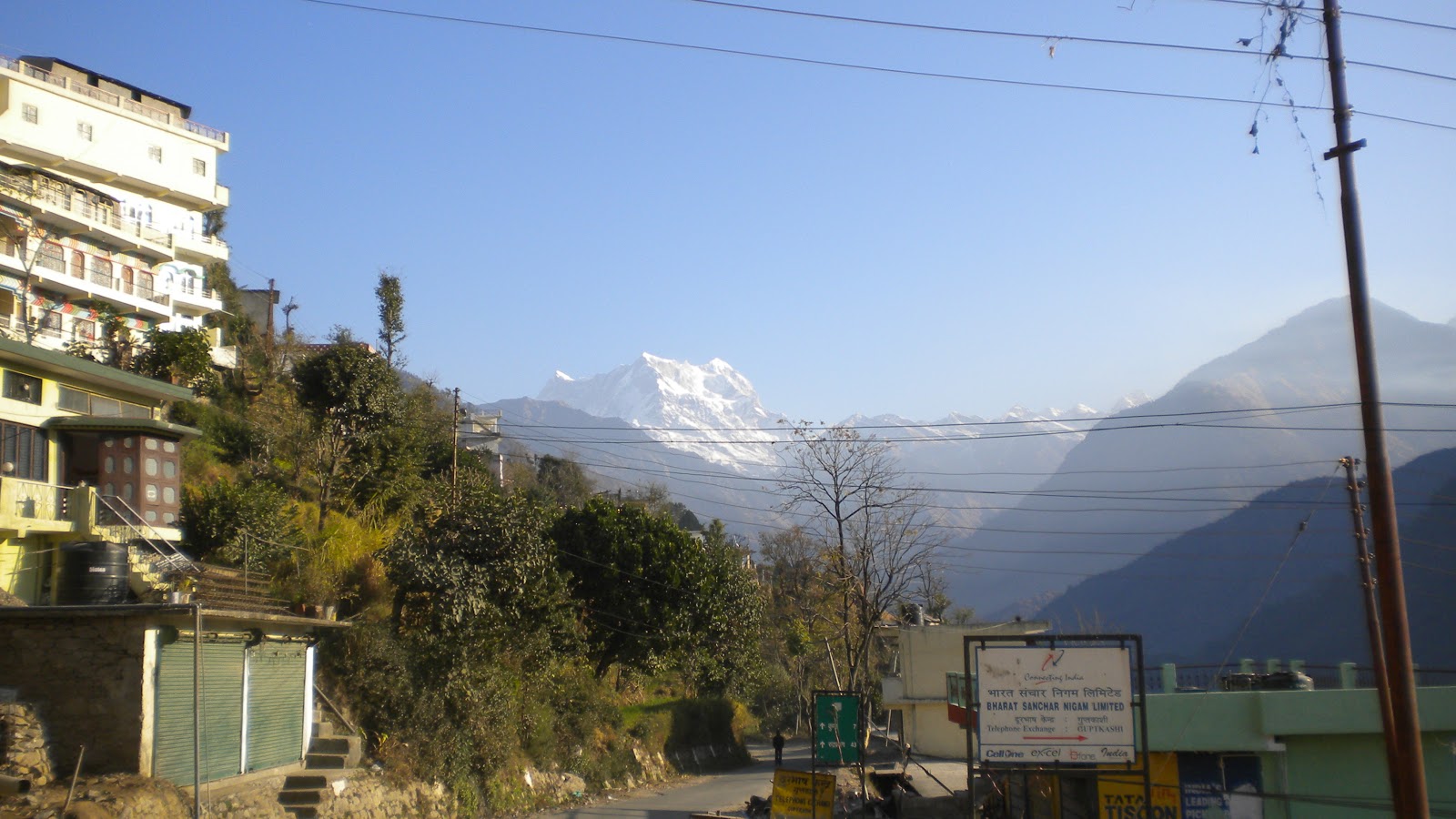 The route going down from Gupt-Kashi to Kali Mathh is lonesome, lovely and the road is very good, although small.  The farther we go on this road, Chaukhamba comes nearer and becomes clearer 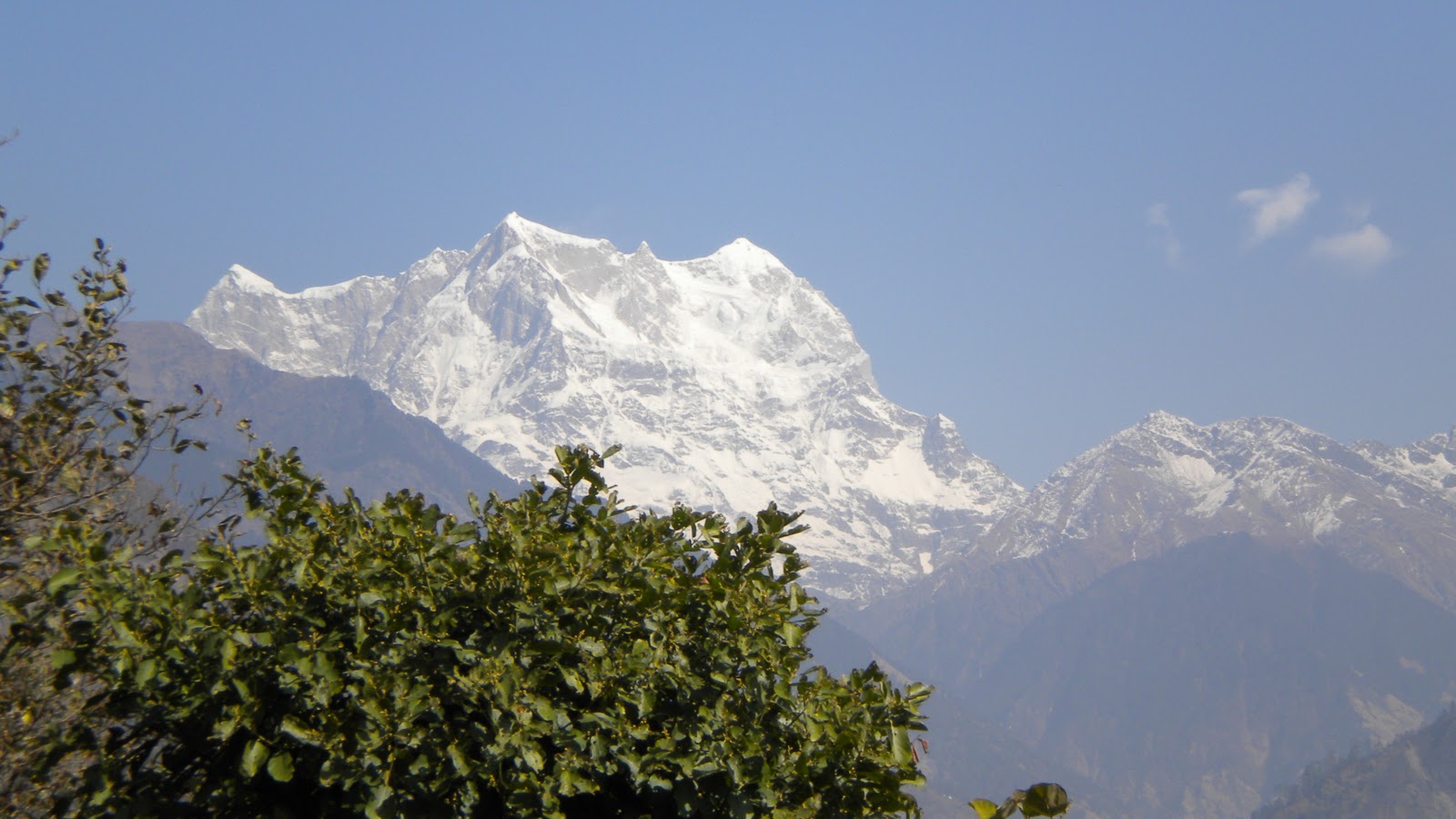 After enjoying the beautiful scenes all around, we covered 22 Kms in one hour and reached Kali-Mathh. 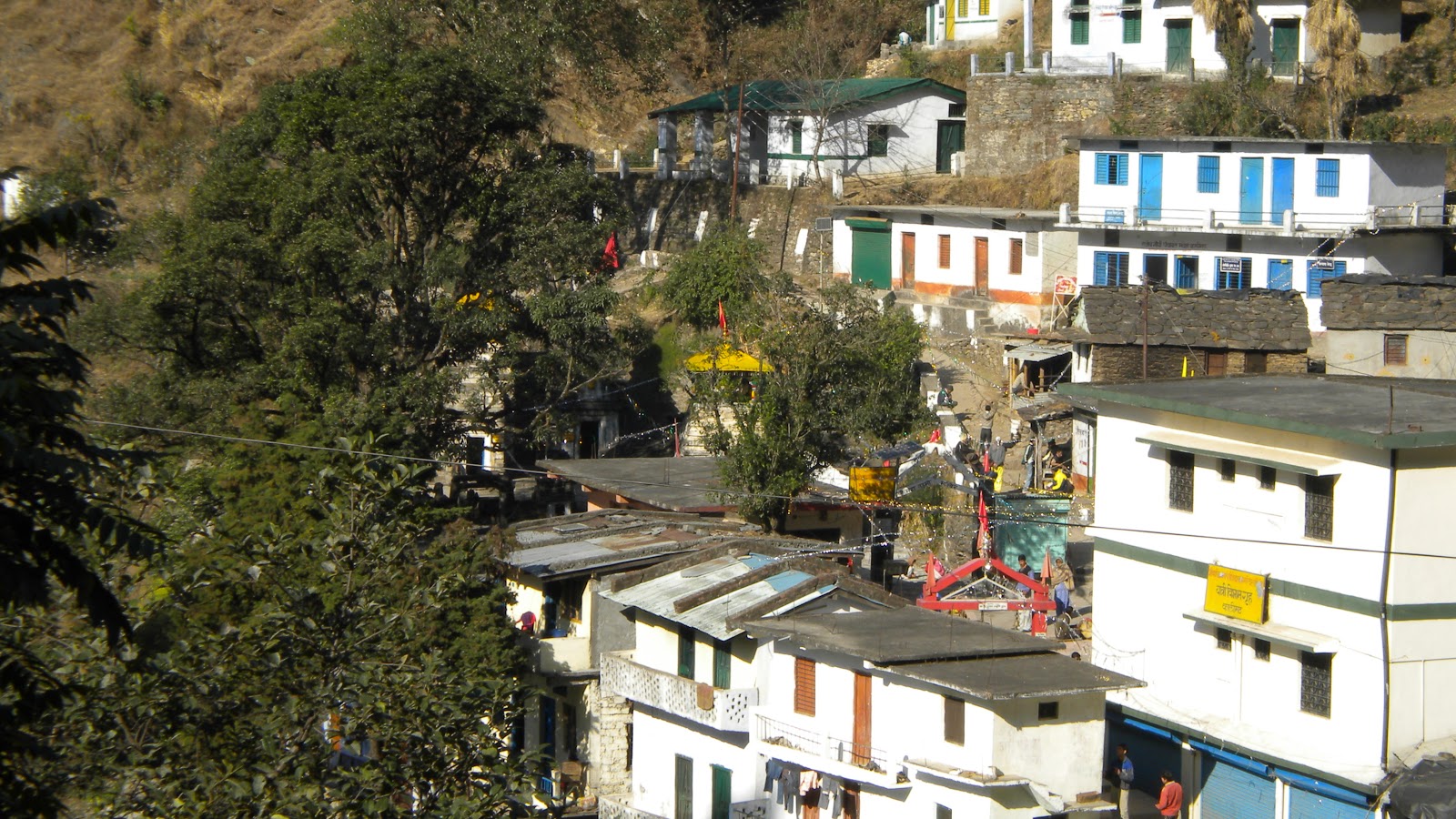 We parked the car and were ready for this great place.  Kali Math is at the height of around 6000 feet above sea level, surrounded by river Saraswati from three sides.  We crossed the old bridge on the river and reached temple. 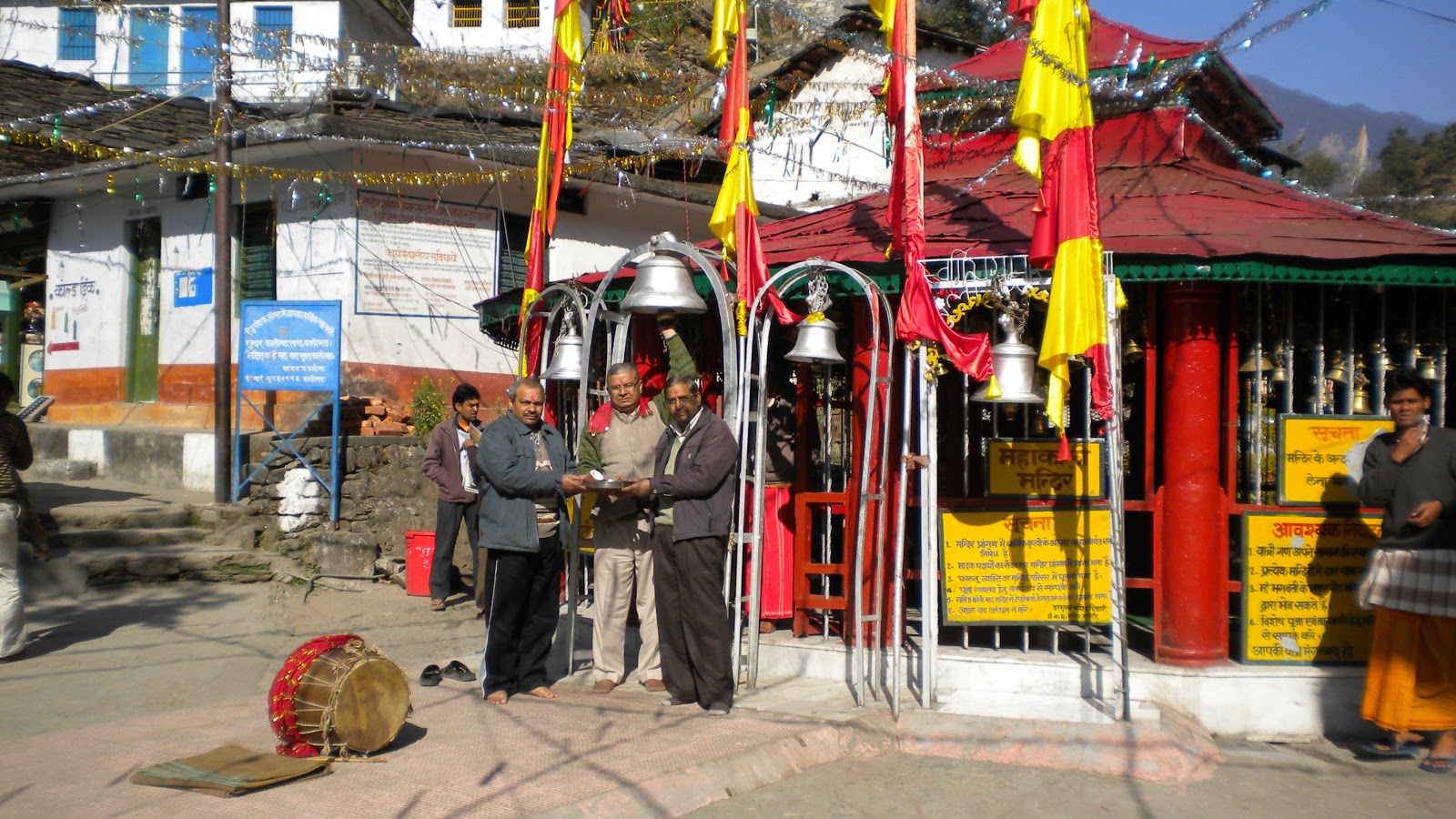 One thing I like about Uttranchal temples is that the priests there take your puja seriously and do it duty fully devoting full time, unlike in Vaishno Devi where they literally push you out of temple without any politeness.  We had our puja and listened to the legends from Pujariji, who was more than happy to share his stories with us.

Kali Mathh campus is having many temples in the vicinity, specially the Saraswati temple, Shiva and shakti temple.  Just go further the main temple, and you are on a big veranda, having small temples on one side and Beautiful Saraswati river on the other. 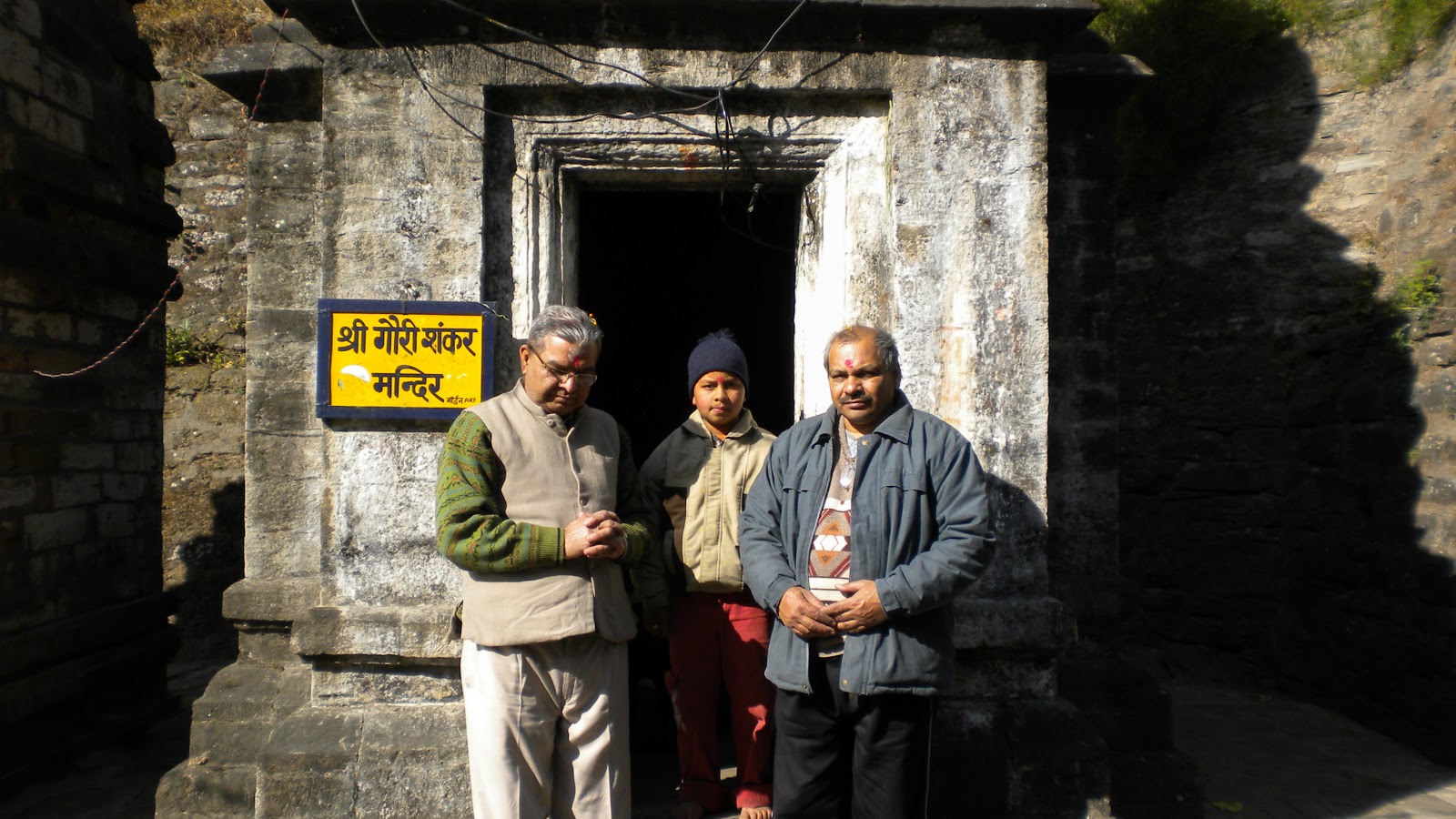 Little temple of Gauri Shankar has the only idol of shiva-shakti facing each other, as if talking.  The little punditji was about 10 years old and was quite enthusiastic to tell tales about the temple After getting some money from us, little punditji ran towards the nearby shop and purchased biscuits and toffees with our Dakshina.

There is a havan kund, in which there is fire always.  There are two care takers who keep the fire 24 hours a day 365 days a year. It is said that this Yagya fire was lit by Sita and has not extinguished for all the three yugas.

There is a Shila-Lekh outside this Yagya-room, which has some story written in strange language.  The alphabets seem like of sanskrit, but the language is neither sanskrit, nor prakrit or Pali.  The chief priest told that many academicians from UN came here and took photos of this writing to make head and tale of the story.  It seems the language is so old, that it cant be understood by today’s standards. 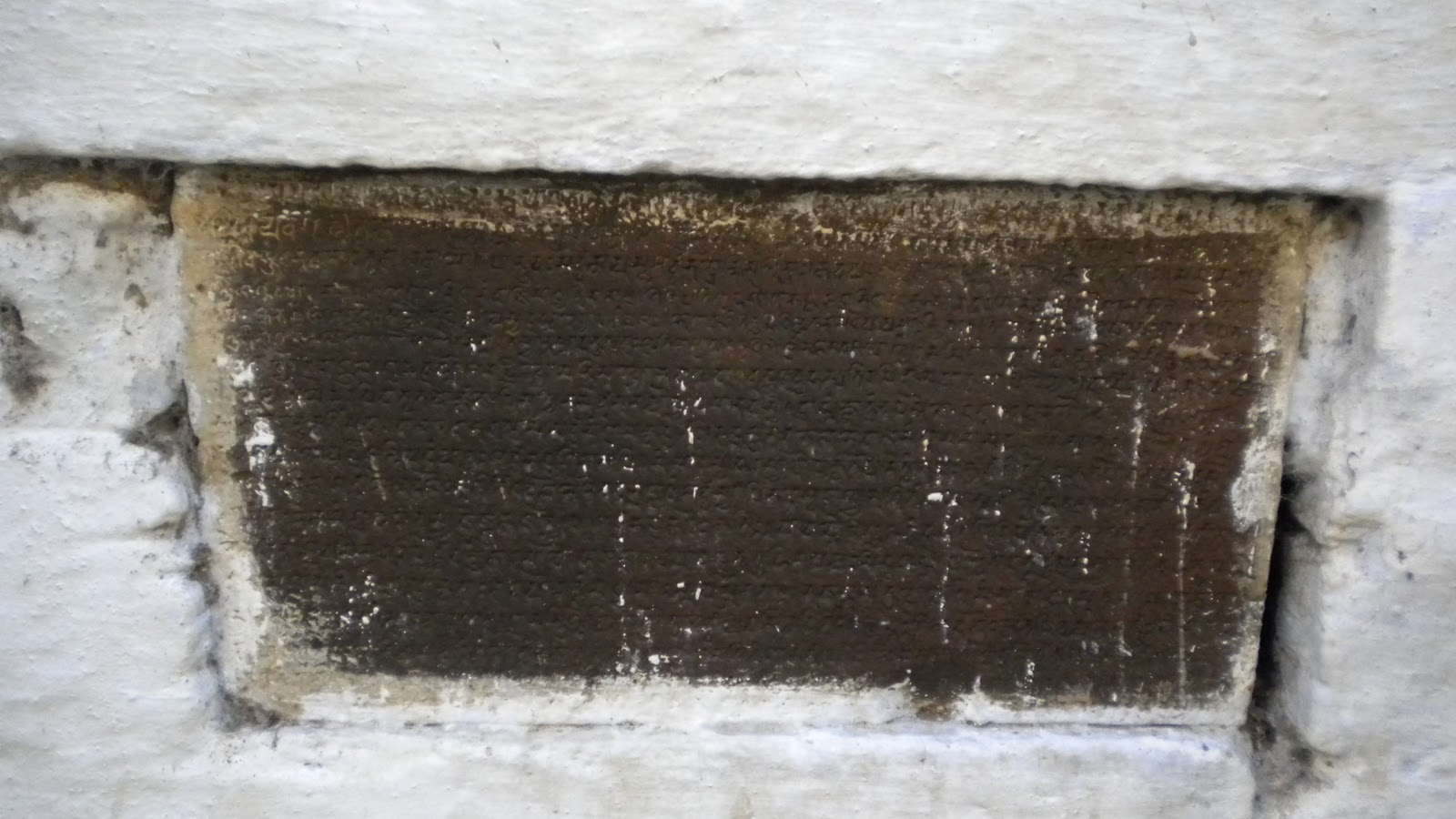 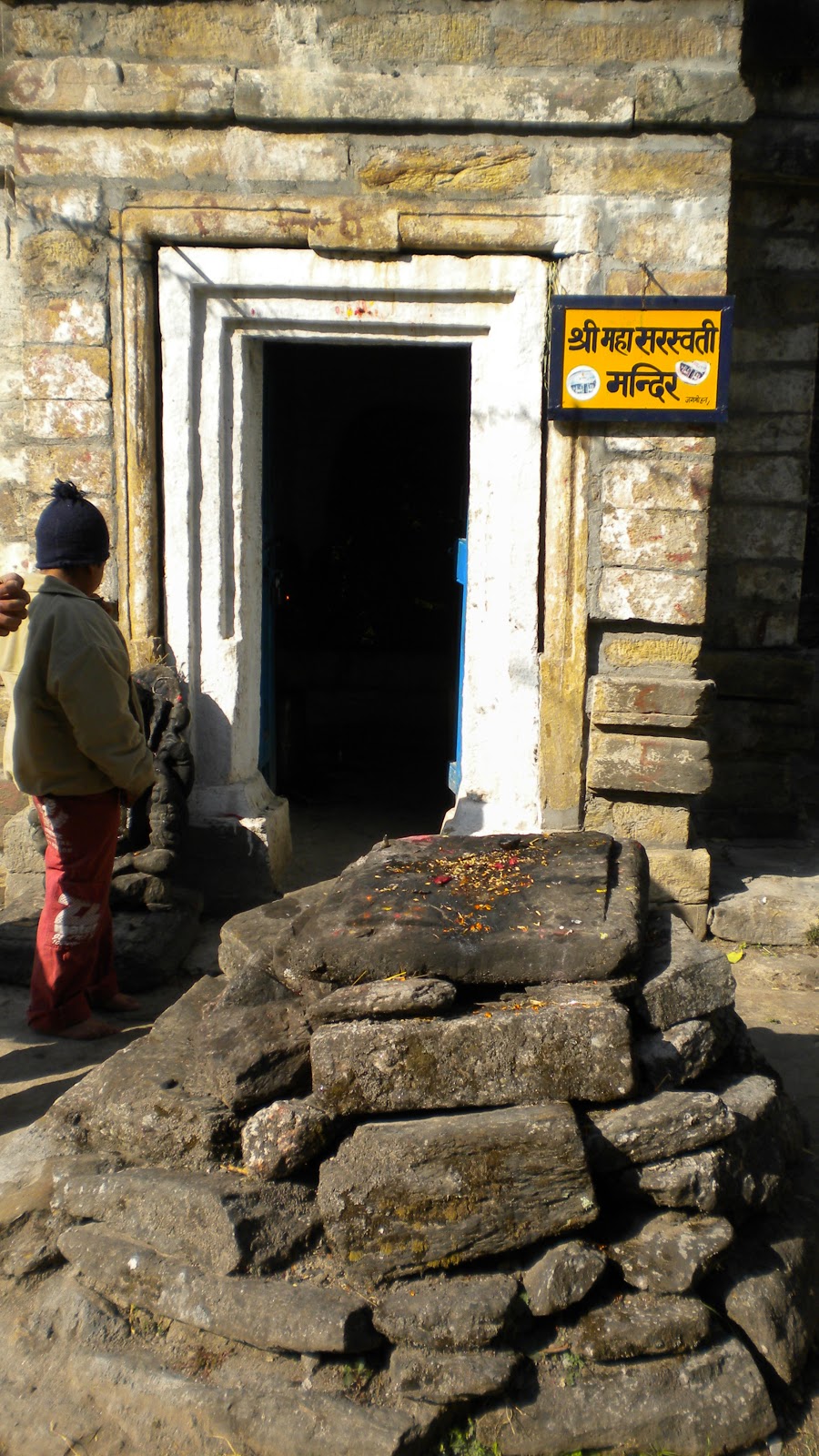 After Darshan, we came to nearby shop but he had not much to offer to eat. We settled for tea and refused to eat samosas which looked quite unhygienic.  Those going to Gupt-Kashi must fill the belly in Gupt-kashi market, for the day because it is difficult to find food here.

There is a Dharamshala in the temple, where one can stay. Temple arranges for the bedding and one has to cook his food himself.There is a tracking route uphill about 6 Kms in thick forest.  In this jungle we can find many stones which have Yantras made on them, 100s of years old.  The forest is full of bears and it is not advisable to go alone there.

As we were about to leave temple premises, we saw a little water-mill.  This was a great example of ancient technology.  Water was brought in the Mill from river and it pushed a little wooden turbine, which is connected to a heavy stone.  The Mill was working fine and wheat flour was gushing out.  We were told that all villagers around come here for their flour needs.

Then we went further 5 kms on a dusty road going through dense forest, as if we were going to touch the Chaukhamba, or would reach Kedar Nath.  After 5 Kms, the road ended in a very tiny village.  On the other side of the valley was ancient Shiva temple, said to be 100s of years old. 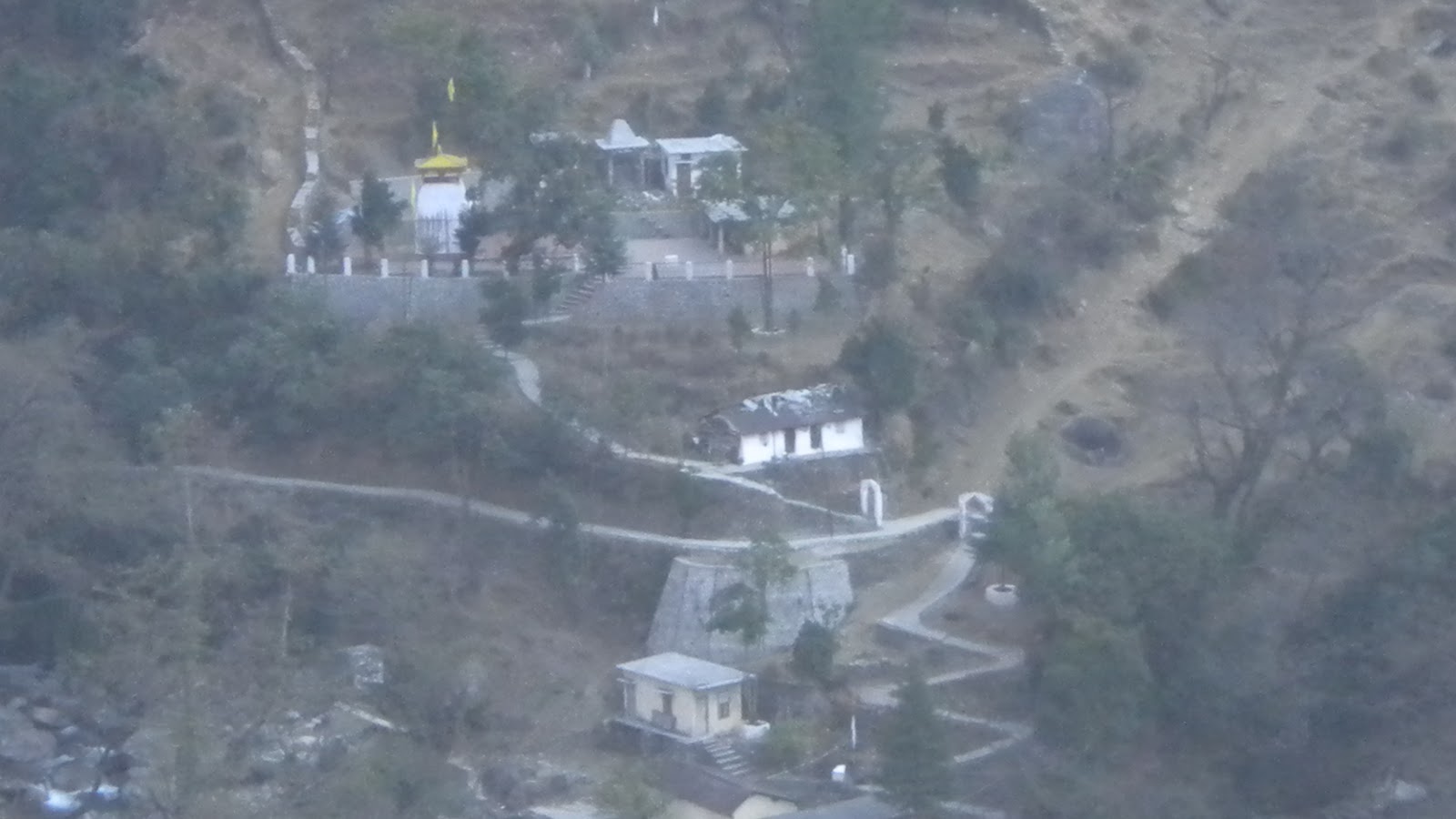 After taking a stroll and snapping some photos, we started our return journey. 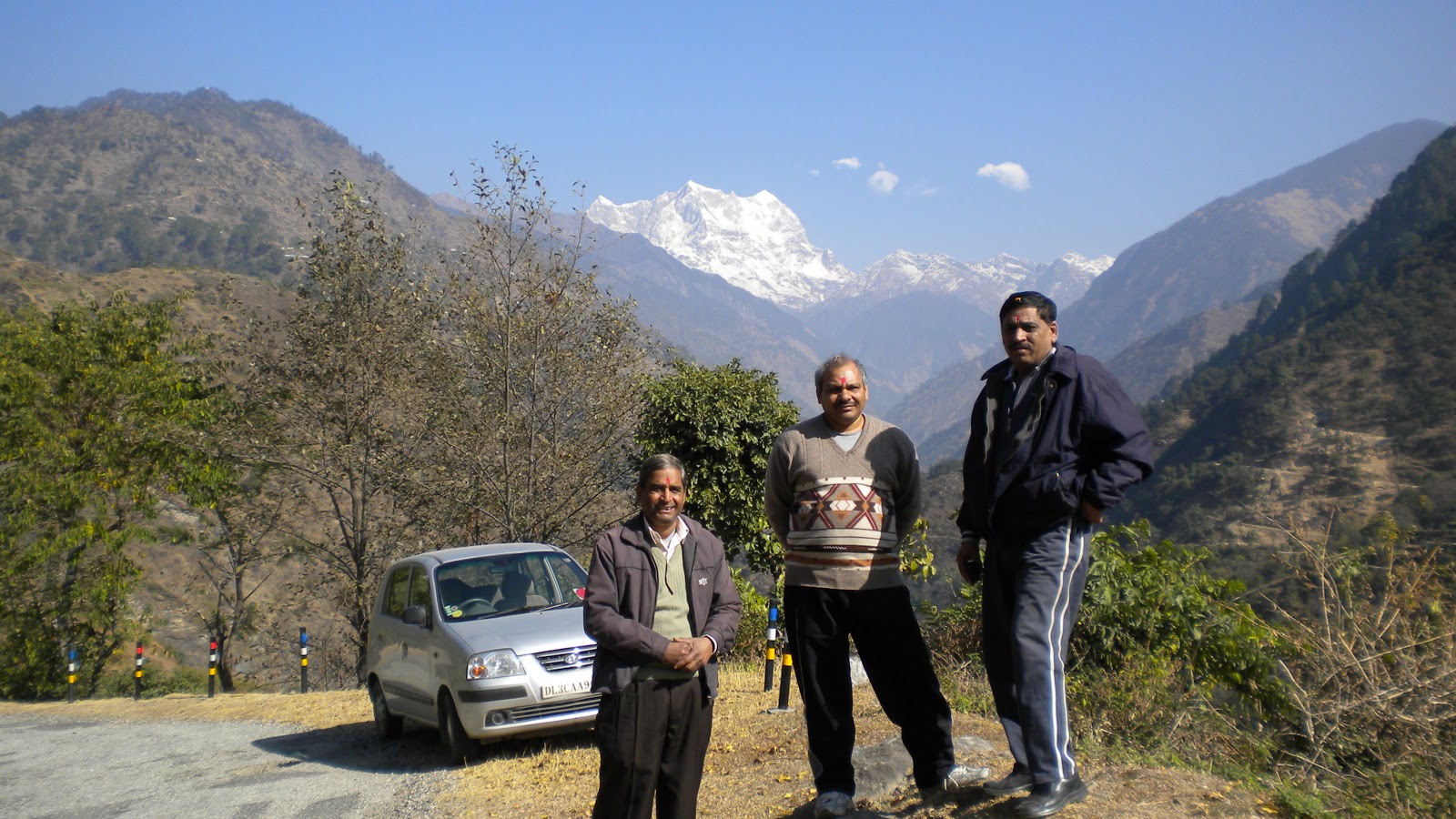 When Kali entered the earth in Kali Mathh, she first peeped out her head as Kalyani (the helper of the world), in Dhaari Devi… about which I will write in my next story.

It was evening of Saturday, 9 October 2010. I have just returned from the office when I received call from my cousin brother whether…