After viewing a blissful sunrise at Dzongri Top, we ascended down to our campsite at Dzongri. I have narrated in a previous article about our journey till Dzongri enroute to Goechala Pass. Me and my two friends went for Goechala trek as a part of a group of sixteen trekkers last October. Our guide Sun Hong Chong and his associates were our facilitators apart from path-showers in this adventure.

After breakfast and packing up the tents at Dzongri, we were ready to depart from Dzongri -the place which initially gave us bad vibes (because of friend and fellow trekker Prashanto’s altitude induced sickness), but more than made up for it by providing an out-of-the-world view of major renowned peaks of Eastern Himalayas. We started proceeding towards Thangsing via Kokchurang.

The beautiful snow-covered Pandim peak gave us company in this stretch, sometimes hiding behind clouds and then re-appearing again till before the downhill journey to Kokchurang started.  We often took short breaks to munch on some chocolates and dry fruits while admiring the green vales guarded by blue hills in all sides. We followed the trail over lush green meadows, rocky cliffs interspersed with small streams till before the downclimb started through a narrow boulder-laden path through steeply inclined slopes leading to Kokchurang. 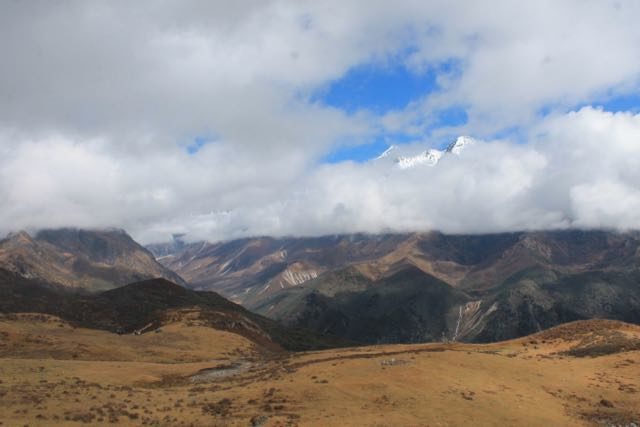 View of Doring camping side from Dzongri Top

Kokchurang is another beautiful campsite on the banks of a swift-flowing mountain stream. After having lunch at the forest rest-house, we crossed over a wooden bridge on the stream and started the uphill journey through rocky steps amidst forests of pine, juniper and rhododendrons. By the time  we reached Thangsing after covering a distance of 6 km, it was already dark. The day went a bit strenuously and so after having dinner, I went off to sleep in my tent.

Thats the bridge at Kokchurang which we crossed on way to Thangsing. Kokchurang is one beautiful stopover in the Goechala route covered by pine trees in all directions. 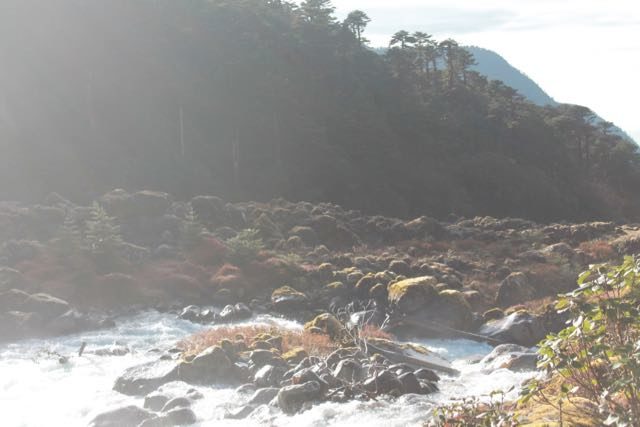 Sunrays filtered through mist falling over the river at Kokchurang. This picture was taken while returning back from Thangsing. Kokchurang can be easily counted as one of the most picturesque stopovers in the Goechala route

The next morning as I came out of my tent, my eyes were mesmerised by what I saw around. A vast stretch of meadow, that is Thangsing is guarded by Pandim on one side and a swift river flows noisily close by. One flank of the mighty Kanchenjungha shone brightly ahead of the path towards Goechala. Thangsing easily qualifies as the best spot enroute to Goechala Pass.

Though Kokchurang and Tsokha can give stiff competition to Thangsing. My groupmates observed that my face has become swollen. So has my tent-mate Sangeeta’s face. Effect of altitude and cold. Though I wanted to hang around in this stunning valley for some more time, Sun Hong asked us to quickly get ready because we have made plans to visit Samiti Lake today itself. 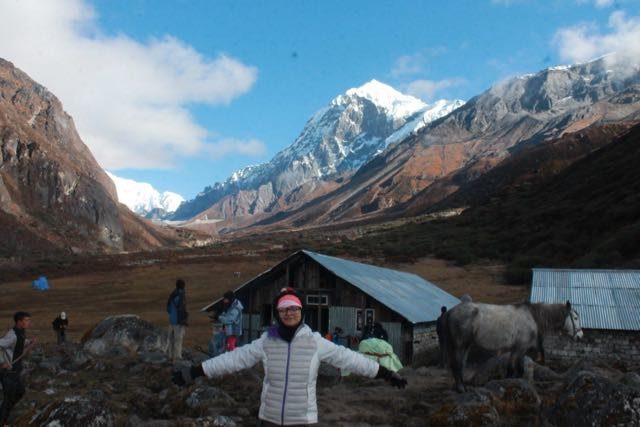 Thats me in front of our camp in Thangsing. Pandim at right and a flank of Kanchenjungha’s arm can be seen ahead

Another view of Thangsing guarded by Pandim on the right 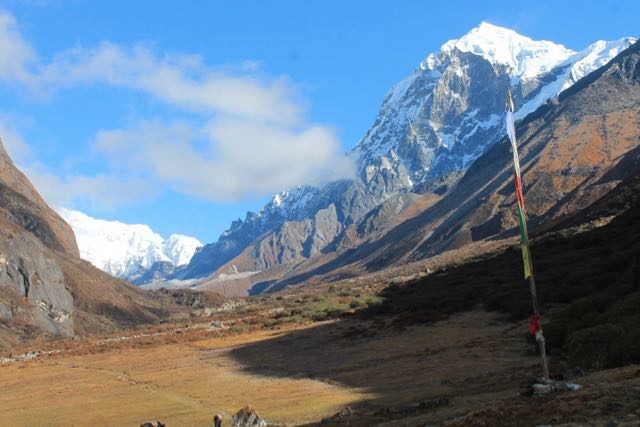 After having a wholesome breakfast of honey, tea, cornflakes, parathas and noodles, we started crossing over Thangsing’s vast stretch of grassland interspersed at places by rocks and small jet-flows of streamwater. This was another enjoyable stretch of walk. The view of Kanchenjungha lying ahead in this particular stretch added more excitement.

I found Agam Singh gathering small rocks and placing them one above another. He explained it is their way of seeking blessings from the Mountain God. Another guide for the team-SS and the youngsters Budhha I and Budhha II had reached Lamuney before us and made the tents ready. They came back from Lamuney along with a kettle and mugs supplied by Cook Samir Rai to serve us hot tea.

The temperature was lower by quite a few degrees in comparison to last day when we were travelling from Dzongri to Thangsing. Agam and SS are Sun Hong’s cousins and fellow villagers. They too work as guide. SS accompanied us during the last day’s hike. While talking to him we found out that he was not conversant in Hindi or English and so our group communicated with him in sign language.

This often led to humorous situations like when someone asked him at the second viewpoint of Goechala whether sunrays, that is ‘dhoop’ reaches there, he replied in the negative thinking ‘dhoop’ is some wild animal. Another team member asked him in Hindi the name of certain peaks, to which he replied that Sun Hong is his brother. However, he had thorough knowledge of the route and in the past, he had carried down many trekkers who lost consciousness or became sick in the high altitude Pass.

In the stretch between Thangsing and Lamuney, the luminescent white arm of Kanchendzonga was sometimes getting covered by clouds, then again to re-appear more radiantly and blind us. I had to put on my shades to look up at the powerful Mountain God. I guess this was a basic form of snow-blindness. We, the mere human mortals should not dare to look up at the Mighty One with naked eyes! 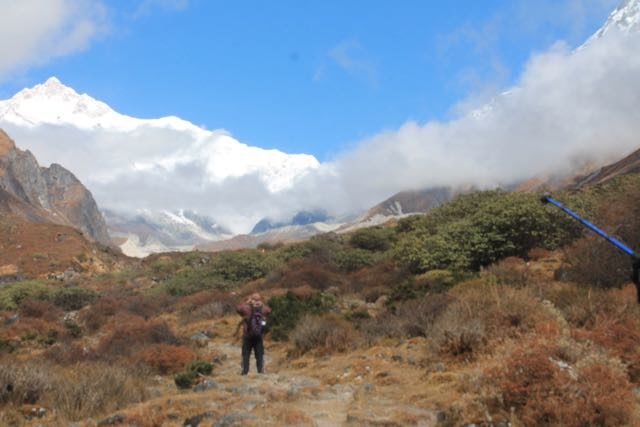 Radiant Kanchenjungha in front of the way to Lamuney 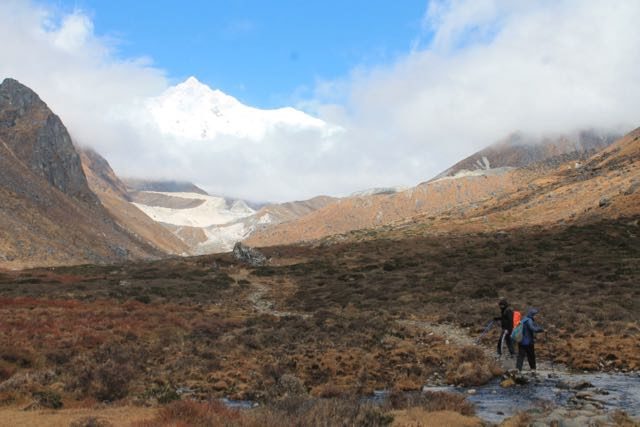 My friends Prasanto and Arun crossing a stream on way to Lamuney from Thangsing. The path is blessed with the radiant view of a flank of mighty Kanchenjungha

We reached Lamuney within two and a half hours. Sun Hong’s team had reached before us and already set up the tents at the river-bank. From here, only Pandim is visible and at the moment, Holy Peak Pandim has also gone behind clouds. We quickly started making a move towards Samiti Lake. We will not have much time to view the lake tomorrow enroute to Goechala Pass. It was again an uphill hike followed by downhill for about an hour to Samiti Lake.

The injustice about Goechala is intriguing. Camping is not allowed at Samiti lake

Lamuney camping site on the cloudy afternoon that we reached there 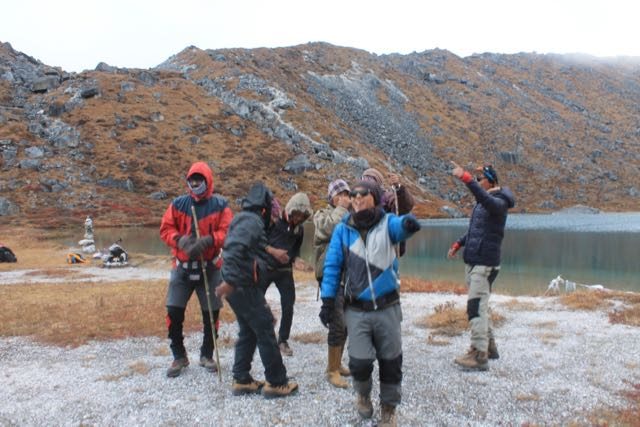 Sun Hong, Agam and other members of the team regaling in front of Samiti Lake

Samiti is a tranquil azure coloured lake surrounded by bare rocky mountains on all sides. Noticeably, the surroundings are devoid of vegetation which indicates high altitude. Earlier trekkers used to camp near the lake. But it has been stopped for a decade now because of environmental issues. After spending about half an hour at the lakeside, we decided to return back and rest.

Sun Hong and his men will wake us up at 3.30 a.m.at night because it takes about an hour and a half to reach the first view point of Goechala Pass. We all went to sleep early so that we may relax and gain energy before the final lap of our trek. At night, heavy howling winds were blowing. It seemed the wind will blow away our tents.

Journey to Goecha La – A jewel hidden at the foot of Kanchendzonga Part II was last modified: July 18th, 2022 by SRIYANKA CHATTERJEE

After all this, the last thing on our list was a visit to some tea estate in Darjeeling. To go there was one part of the pleasure and the next best part was to sip a hot n nice cup of tea there! It was really a divine experience and I had about 3-4 cups of tea- each of a different variety!