The mighty snowy beauty Kanchenjungha had hugely captivated our minds at Sandakphu in 2015.  During the train journey back to Kolkata after completing Sandakphu trek, we – a group of five travel-crazy university friends – decided that our next trekking destination will be Goechala Pass which provides a closer view of ‘Five treasures of the Snow’, which means Kanchenjungha in Nepali. The trek to Goechala Pass and heavenly views of some of the loftiest peaks of the world, indeed, proved to be a treasure to be cherished forever.

The starting point of Goechala Trek is Yuksom, a small hill town in West Sikkim.  My travelogue on Goechala Pass will be incomplete without a mention of this picturesque town nestled in the laps of Eastern Himalayas which made a mark in my heart within a span of two mornings and an evening before and after the trek that we spent there. I will write in a separate article about the trek to Goechala Pass, an adventure which occupies a big portion of my heart.

On the morning of 17th October,2016, Padatik Express reached New Jalpaiguri Station almost two hours after the scheduled time. The late-running of the train irritated us since we have to travel almost 150 Km by road, that is, it takes almost 6 -7 hours from NJP to reach Yuksom. However, the clear sky at NJP lifted our spirits as the magnificient Kanchenjungha peak was visible from the station. This magical peak always manages to cast its spell on me!

As we stepped out, Sun Hong Chong, our trek-guide came to greet us. Two more teams from Kolkata consisting of nine members and four members each have also arrived today. Sun Hong will guide them as well. A facebook group was formed two weeks prior to the trek so that all the team members can interact and discuss all nitty-gritties related to the trek. After a brief face-to-face interaction with the team members, we boarded two SUVs arranged by Sun Hong and set out for our destination Yuksom.

Just as the car left Siliguri and entered Sevoke Road, passing by the lush greeneries of the Mahananda Wildlife Sanctuary, a holiday feeling set in. I keep on waiting for this time of the year when I can move far from the madding crowd and seek respite amidst green trails and fresh mountain air. The car slowly started climbing up the slopes. The green waters of Teesta flowing side by side, accompanied us for quite some distance on the way towards Jorethang in Sikkim. Lunch break happened at Melli.

After leaving Melli, we were delayed further because road widening and repair works were going on in the stretch between Melli and Jorethang. Our driver informed us that the roads in this part of Sikkim gets damaged in almost every monsoon. This part is landslide prone.

We reached the halfway mark of Jorethang at about 5 p.m. Sun Hong had informed us that there is no ATM at Yuksom. Hence, some of us withdrew cash from the ATMs located in Jorethang. We took a short break of 15 minutes at this quaint little town. From here, roads become somewhat steeply inclined. It was getting dark. The surrounding forests looked denser. Our driver stopped the car below a stream which fell over the road to wash the windshield with fresh stream water.

A number of jhoras (streams) lining the road with puls or bridges erected over them enhances the beauty of the place. Finally when we reached Yuksom at around 9 p.m., it was stark dark and there was hardly anyone on the roads of the sleepy town. We boarded in Pradhan Hotel as was arranged by our guide. Apart from me, there was another lady in our group of sixteen. I shared a room with her in the top floor of the hotel and we went on to share the same tent in course of our trek. We had a light dinner and went off to sleep quickly. 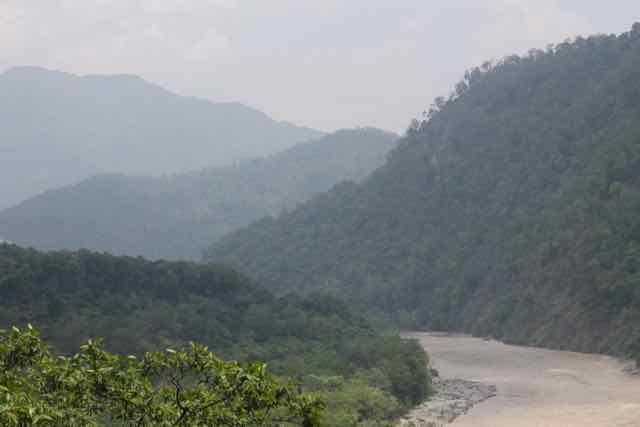 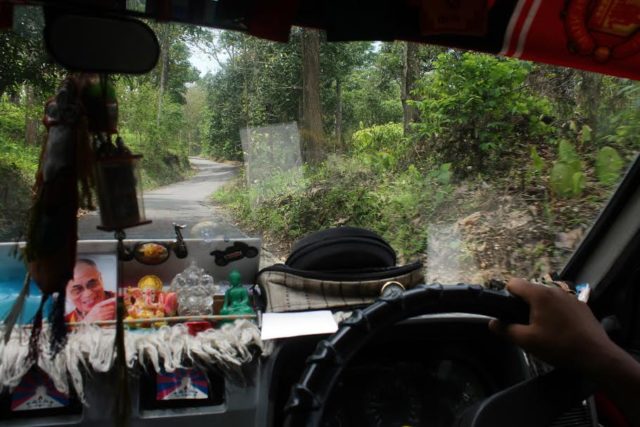 Road view of a part of the stretch between Jorethang and Yuksom through our car’s windshield.

On 18th October morning, I was woken up at about 5 a.m. by the sound of cock’s call. I gazed out of the window to see waves of faraway blue mountains, some with snow capped peaks and also tree-lined, green hills closer by. The bells chimed at a local monastery in the opposite side of the hotel.

Holy flags of various colours were hanging from rooftops and wooden posts on road-side. Yuksom happens to be the first capital of Sikkim. Dubdi – the first monastery of the state was established by the Chogyals (rulers) in this historically significant town. Sun Hong has promised to show us around Yuksom at the end of the trek. 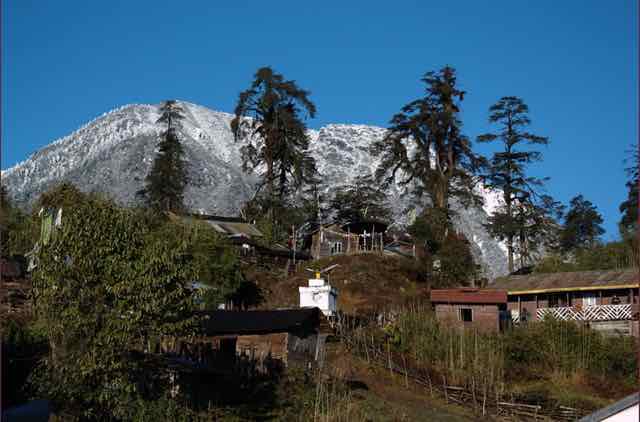 Picturesque Yuksom nestled in the laps of Eastern Himalayas. 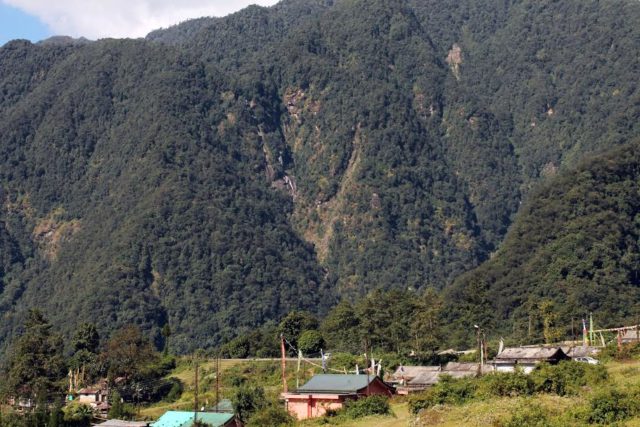 After taking bath, I went downstairs along with my rucksack and handed it over to Sun Hong’s assistant. We bought some items required for our high altitude trek, like a pair of woollen socks, a plastic sheet for 30 rupees which was skilfully turned into a poncho by Sun Hong. Being a popular trekking destination, mountaineering and trekking gears are stocked by a number of shops in Yuksom. After a sumptuous breakfast at Gupta’s Hotel, me and my two friends – Prasanto and Arun went to visit the nearby monastery. Over there we turned the holy wheels, lit lamps and prayed for the success of our trek. 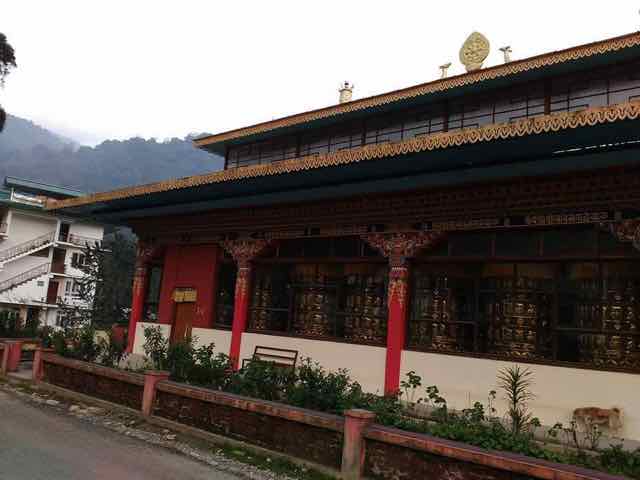 The monastery opposite to Pradhan Hotel 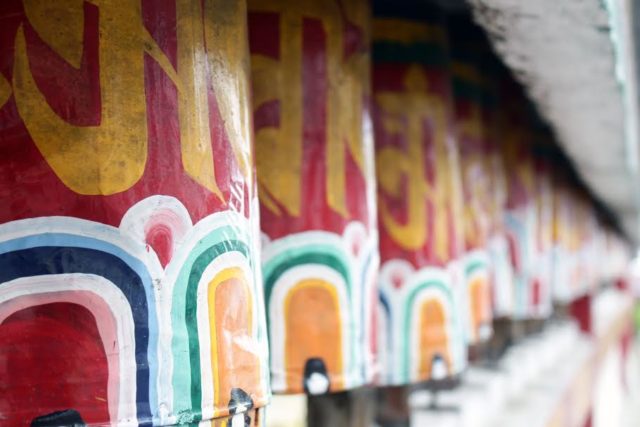 The prayer wheels within the local monastery 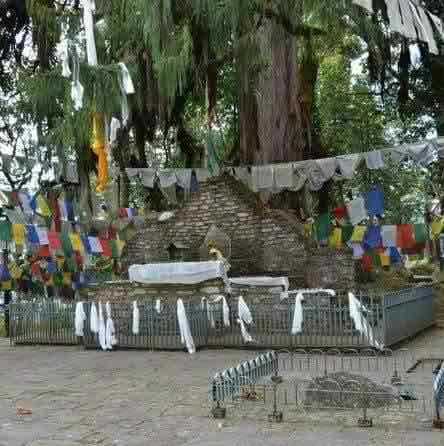 Prayer flags tied in a corner of the monastery complex.

It was about 8 a.m. then. We were to start our trek at about 9 a.m. So three of us decided to utilise the one hour time in exploring the neighbouring areas. Sun Hong’s assistant Agam Singh offered to show us around. Orchids in various shades of purple, yellow, and white hanging outside cottages and huts enhance the surrounding beauty. We visited Kathok Lake where white prayer flags hanging on all sides of the pristine waters add a serene touch. Tourists were feeding fishes in the lake.  Down the road we found separate garbage-bins earmarked for organic wastes, plastics, metals, tins and cans, glass, clothes, paper bags and so on.

My observation is that Yuksom is a clean town. I found no garbage heap gathered anywhere around. Infact, there are strict rules about prevention of littering within the Kanchenjungha National Park which starts at Yuksom. The whole of Sikkim seems cleaner than any other state I have visited. I found slogans of Swacch Bharat and Clean Sikkim scribbled on walls in the entire stretch between Melli and Yuksom. The pollution-less environment is complemented by organic farming which is widely practised in the state.

Agam, who is business partner and first cousin of Sun Hong, informed us that state government provides subsidy/incentives for organic farming. Agam and Sun Hong grow cardamoms and engage in farm activities during off-seasons since trekking season is only from March to early June and late September to end November. Yuksom draws more mountaineers and trekkers from around the world than the rest of Sikkim. We came across many foreign tourists and trekkers.

Yuksom is still regarded as the base camp of Kanchenjungha, although ascent from Sikkim side has stopped over a decade ago. The mountains are revered as God by localites and stepping foot on the sacred slopes amounts to desecration of the divine forces. Kanchenjungha is abode of the Gods. We came across camps of the Himalayan Mountaineering Institute. Their basic and advanced mountaineering courses are conducted at Rathong Glacier, the starting point of which also happens to be Yuksom. 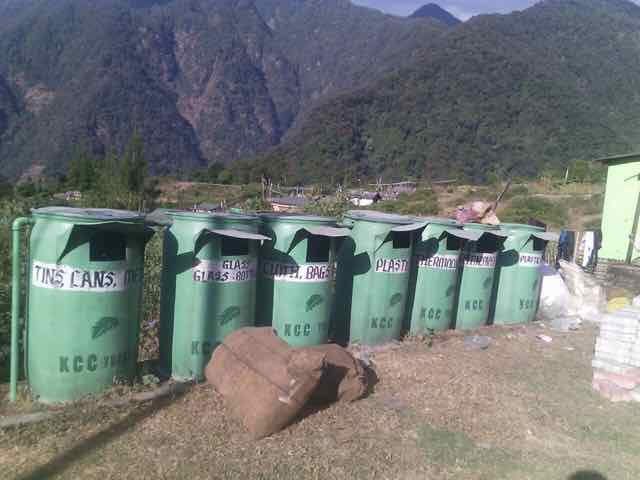 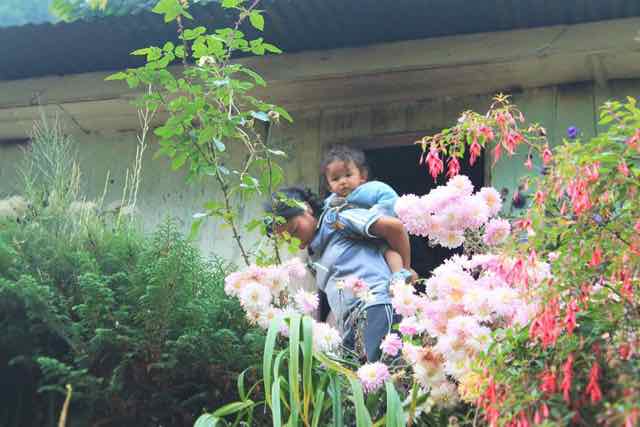 Orchids and a baby on mother’s shoulders outside a local cottage. Their innocence and colour brightens up the surroundings 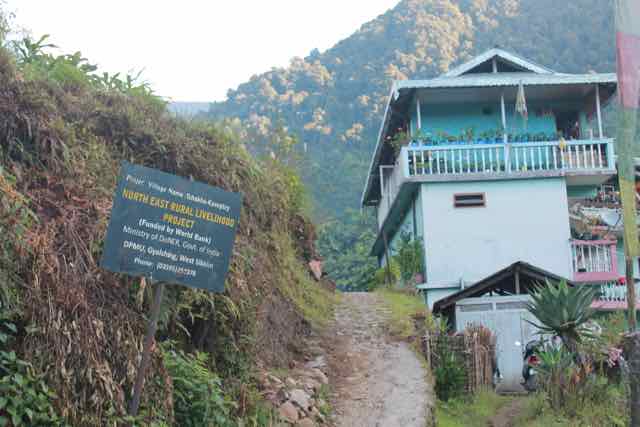 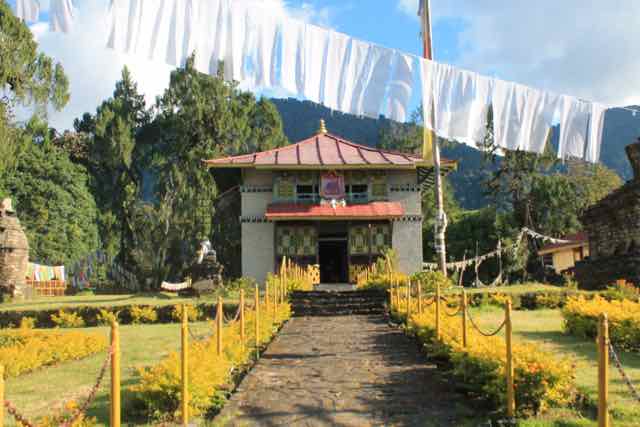 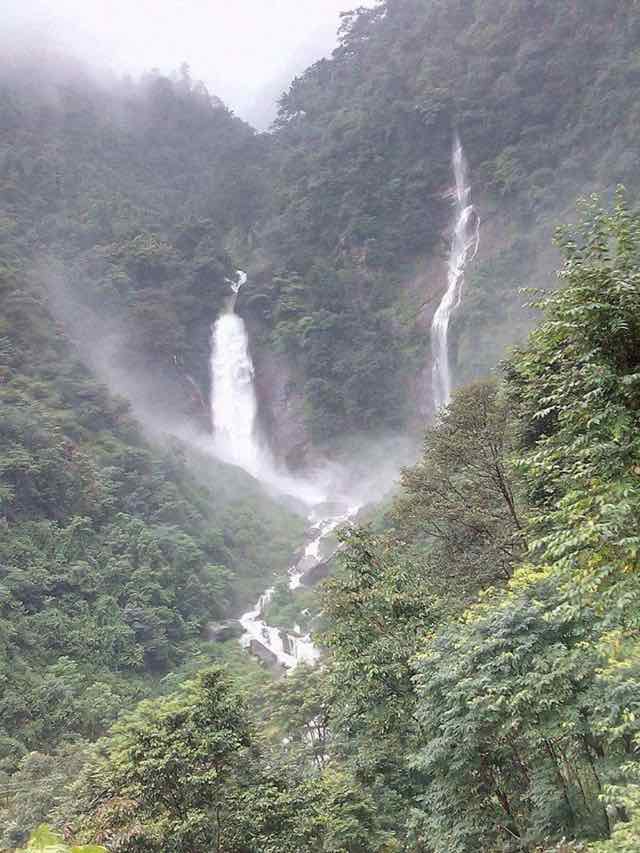 A waterfall in the outskirts of Yuksom 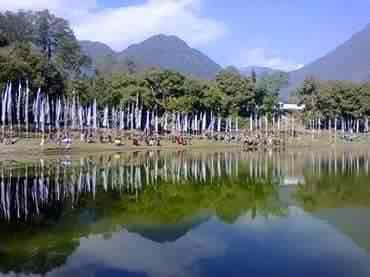 Hiking a little further, we came to an elevated area from where we viewed Kabru North peak. We came across a primary health centre and farm area developed under North East Rural Livelihood Project training. There is also a museum showcasing ethnic culture of Sikkim which we could not visit for paucity of time. After returning from Goechala, we visited the Dubdi monastery.

A visit to Yuksom is incomplete without viewing the sacred monastery which reserves a place for  Yuksom in Buddhist pilgrimage map. Some inner walls of the two storied stone-built medieval structure are painted with depictions from the life of Buddha. It houses some rare and sacred manuscripts. The lush green trail to Dubdi from the end of a bridge over a jhora is a beauty by itself!

We also found a good view of Mount Kumbhakarna while returning back from the monastery. Other attractions of Yuksom include the Coronation Throne associated with the first Chogyal of Sikkim, the ruins of the old palace and Kanchenjungha Falls located closeby. However, we could not visit these places owing to shortage of time. 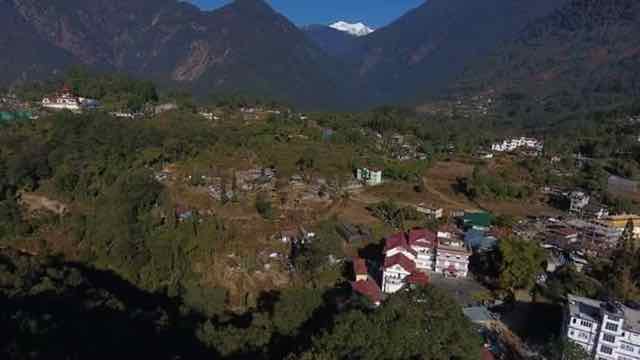 View of Kabru Peak from Yuksom

When dusk fell over Yuksom.

I was completely bowled over by this small town’s beauty and serenity. Transportation is not a problem as Yuksom is well connected with Geyzing -district headquarter of West Sikkim, Gangtok, NJP, Bagdogra and other important places. Yuksom is an ideal place for spending a few peaceful days in the laps of the Himalayas.  Hence, I plan to enjoy a longer stay with my family at this sleepy old town sometime soon.

Yuksom – a peaceful abode in the laps of Eastern Himalayas was last modified: November 29th, 2018 by SRIYANKA CHATTERJEE

We began our voyage! Mathias, three young boys who formed the ‘crew’, the Latvian family and I were going to be stuck together (for…