I love driving, and have been driving across the country for the last fifteen years, the nature of my job also offers me such opportunity as I get posted to various cities of the country. Recently I got my marching orders from Jammu to Bangalore, from the City of Temples to the Hi Tec City and decided to drive down to my destination. Honestly, what better way to travel the length of the country than driving through it. I own a blue TATA Safari which is fondly called the ‘Hathi ka Bachha’ my faithful and comfortable companion to many such adventures. My wife and kids could not join me because of the school examinations and so I took the voluntary services of a friend who was also as excited about the journey as me and finally to give us company was my three year old Golden Retriever “Rusty”. The advantage of travelling in a Safari is that you can throw anything at it whether man or beast and it can accommodate lovingly, so we folded the rear seats of the car and made a play pen for our not so little four legged companion.

I will cover the journey in two parts Part I from Jammu to Delhi and Part II from Delhi to Bangalore, I took five driving days to cover the distance not counting the days I stopped over to meet family, friends or to sneak in a round of golf en-route.


Being a Delhite I have travelled from Jammu to Delhi a number of times in the last three years, there are multiple options of travelling from Jammu to Delhi after you cross Hoshiyarpur, but I prefer the Jammu – Jalandhar – Ludhiana- Ambala – Delhi route. Firstly the road quality for most of the journey is fantastic, secondly there are a lot of eating joints on the way especially when you are travelling with children who can get hungry all of a sudden.
We started early in the morning from Jammu to avoid the school bus rush and in no time we were on the Jammu – Pathankot highway in no time, early mornings and afternoons you have the yellow school buses practically taking over the roads in Jammu causing multiple traffic jams.
The road till Pathankot which is almost totally in the state of J&K is good, the quality of tarmac is good not excellent with only a few potholes and very little traffic. It is easy to touch 100kmph. The route however has a number of township astride the National Highway, which acts as bottlenecks to the smooth flow of traffic, there are street vendors, local traffic crossing across and my ever favourite ‘the cattle’. 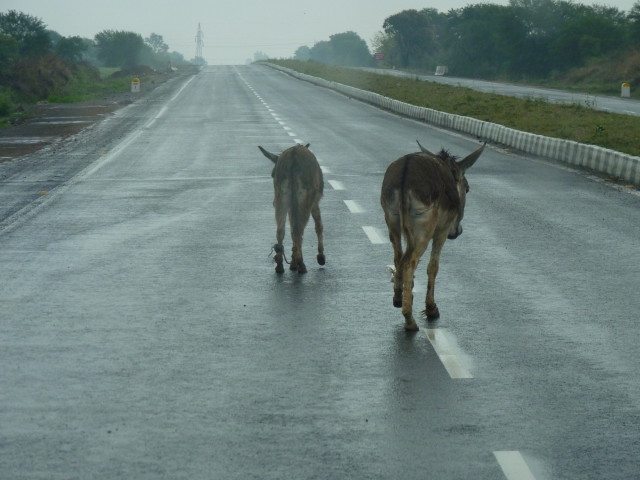 However these are minor impediments and one can easily make up the lost time by speeding up in the next section. There are few good eating joint en-route starting with an extension of ‘Pahalwan Ki Hathi’ at Bari Brahmna and ‘Hotel 17 Miles’ at Vijaypur which has a 24 Hr Coffee Shop and café. After Vijaypur you move into Samba which the place the highway is the closest to the Pakistan Border and hence the favourite place for the terrorists to attack. If you are travelling just before first light be very cautious before you stop your car to anyone waving you to. The Border between J & K and Punjab at Lakhanpur will take some time to cross because of the large trucks that queue up and block the road, the things have actually improved with the new toll booth that has come up.

Crossing of River Ravi brings you into Punjab after around two hours of driving from Jammu, crossing Pathankot is a breeze as you take the bypass to a village called Damtal which surprisingly is in Himachal Pradesh and not Punjab. Like J & K the highway passes through various settlements, however the there is an iron grill fence on both sides of the road which restricts stray traffic on the road. The quality of tarmac is good very few potholes and you can easily touch 100kmph right till Jalandhar.
You encounter traffic once you hit the Jalandhar Bypass which skirts round the city in a series of flyovers one of them has not been completed so you have to struggle to get around it. After ten in the morning there will be heavy traffic between Jalandhar and Phagwara in particular and Jalandhar and Ludhiana in general. There are a plethora of eating places on this stretch including the famous ‘Punjabi Haveli’ between Jalandhar and Phagwara which serves excellent vegetarian Punjabi food – not to be missed by a foodie. The quality of road however gives you mixed feelings. The road till Ludhiana and beyond till Ambala has been under construction for the last three years that I have been driving on it, and the progress is not inspiring. They have stretches where the road quality is good, good tarmac so you rev up the engine, hit the next gear and almost immediately the stretch gets over and you are braking hard to avoid the vehicle ahead of you. It is actually a shame that such a frequented road is not maintained.
Crossing Ludhiana is a pain any way you try it. There are two ways to do it, one through the city, where there is a long flyover almost right through the city, but frequent red lights and slow crawling traffic will slow you down. Then there is a bypass which takes a rather long detour of the city and the quality of road is what nightmares are made of, there is a huge traffic, narrow roads, children running after kites the entire work. So crossing Ludhiana is the proverbial choice between the frying pan and the fire, and irrespective of your choice you will waste hour to hour and half crossing it, my suggestion, go through the city.
After Ludhiana the road smoothens out, the traffic lessens and you get good eating joints at Rajpura and Karnal. The road bypasses both the townships so there is no issues on that, crossing Ambala is again a breeze as there is a flyover that takes you right over the city. And as you reach Sonepat you feel that you are in Delhi itself, which is how much the Delhi has actually spread.
Overall the trip from Jammu to Delhi is interesting because you are never alone, you always have some traffic around you and the scenery keeps on shifting between agricultural to urban. On the same stretch you have the old JCT Phagwara mills and some pretty old houses in Phagwara to swanky showrooms of Mercedes, Malls and eateries on the road, theme restaurants and universities so one can enjoy the drive and see the diversity that is the hallmark of this country. The distance of 624km took us a little over nine hours with breaks some people can do it faster but I prefer to enjoy the journey rather than set a speed record.
Jammu to Delhi was last modified: January 29th, 2022 by Aashish R

A travelohlic who has been driving for the last decade on all possible routes and sometimes where even routes do not exist. I believe that this country can be best experienced by road