TRIP TO HIMACHAL: Our plan got changed
On the morning of 27th September 2015, the pre-booked vehicle came to our hotel. It was Toyota Etios, owned and driven by Deepak Walia (mobile no. 09888319311). He was an energetic, well behaved and responsible young man from Pathankot. He briefed us that the approach road to Kharamukh bridge was not repaired yet, which was also confirmed by some locals of Bharmour over phone. So it was made clear that we could not reach Bharmour. Our hotel booking in Bharmour got wasted. Deepak told that going to Chamba for visiting some temples only, which is 125 km away from Pathankot, would not be quite meaningful. Going to Mani Mahesh went out of question. We also came to know that many visitors were retained on the other side of Kharamukh bridge for safety purpose.

So, under situational compulsion, we changed our tour plan. After mutual discussion, we shaped our revised plan like this : From Pathankot to Dalhousie, Khajjiar, McLeodgunj, Dharamshala, Chamundamata temple, Palampur Tea Estate, Baijnath temple, Triloknath cave, Brajeswari temple. Then we would move to Punjab to visit the Golden Temple and Jalianwala Bag at Amritsar, then to Attari border (or Wagah) and back to Pathankot. The rate would remain same @Rs.2000/- per day all inclusive (as telephonically agreed earlier) for the Himachal trip. But for the Punjab trip it would be Rs.3500/- additionally. Though I had been to some of those places in Himachal earlier, but we agreed to the revised plan.

While checking out from Hotel Asia, we were surprised when we were asked to pay the bill. We told that rooms were booked through Travelguru long back and we handed over printout of booking confirmation with my ID copy. But hotel authority told that they did not receive payment from Travelguru, so we must pay before we leave. This created confusion. On being contacted Travelguru online helpdesk, we came to know that they did not have banking details of Hotel Asia, so they could not make payment. That logic appeared absolutely rubbish as we have paid them more than 3 months ago. Enough time and opportunity was there to obtain banking details to make payment. A long telephonic tussle continued with higher ups of Travelguru, who ultimately agreed to release payment to the hotel shortly. This incident changed our mood a bit.People prefer online booking and pay 100% well in advance to have peace of mind while on tour. So readers, please be careful when you make advance payment to the online travel agencies. One has also to obtain confirmation from the hotel to know whether they have received payment from concerned agency. 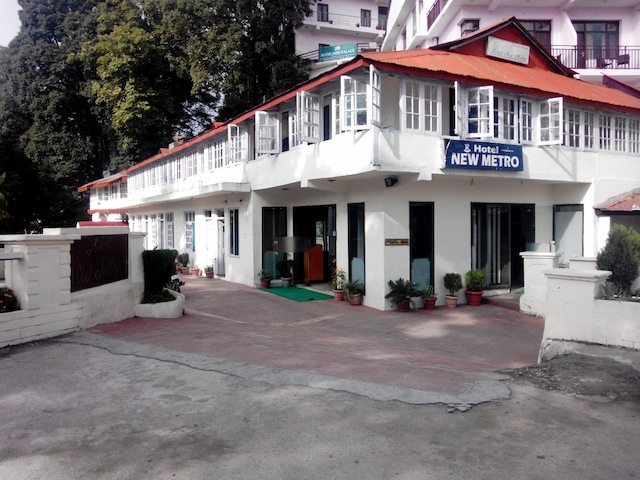 The hotel where we stayed at Dalhousie 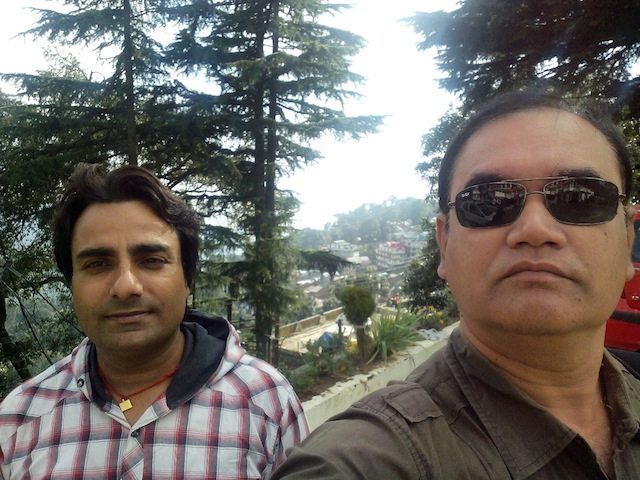 Dalhousie was established by the Britishers in 1854, which is situated around five hills, namely Kathalagh, Potreyn, Terah, Bakrota and Bhangora in the western edge of Dhauladhar range in Chamba district at 2100-2600 metre altitude. So the climatic condition remains pleasant throughout the year, till winter sets in to cover the entire area under snow.The town was named after the then British Viceroy Lord Dalhousie, which has several historical references. First Nobel laureate of Asia Shri Rabindranath Tagore spent his childhood vacation here in 1873. Rudyard Kipling, the novelist visited Dalhousie in 1884.In 1937, Netaji Subhas Chandra Bose stayed here to recover his ailing health. In 1959, Dalhousie hosted thousands of Tibetan refugees, after China taken over Tibet. Dalai Lama visited this place more than once. So, when a tourist walks down the tree shaded avenues of Dalhousie, he/she also undertakes a historical journey down memory lane, knowingly or unknowingly.

After taking our lunch at Hotel New Metro, we went out for local sightseeing. First we went to Subhas bowli. It is placed outside the town. During his jail term, once Netaji Subhas Chandra Bose fell sick with Pleurisy. He was transferred to Dalhousie in 1937 for recovery of health. During that period he stayed in the house of Dr. Dharamveer at Panchpulla Road. While walking along the hilly road, he used to consume natural water coming out of the hill. By continuously taking the water and walking, Netaji’s health improved later on and he returned in good health. To commemorate this, a small but beautiful house was made surrounding the natural spring. The spring reminded me of Chashm-e-Shahi of Srinagar. There was a balcony in the front side, from where you can see the hilly way lying below. Cool breeze was flowing from the adjacent mountain. It was so pure that our body and mind got freshened. In the rear side there was a natural way went into the hill. We went upto certain distance inside the hilly forest through densely placed sky reaching trees. The sound of cricket and chirping of birds amidst quietness of the hill fascinated us. 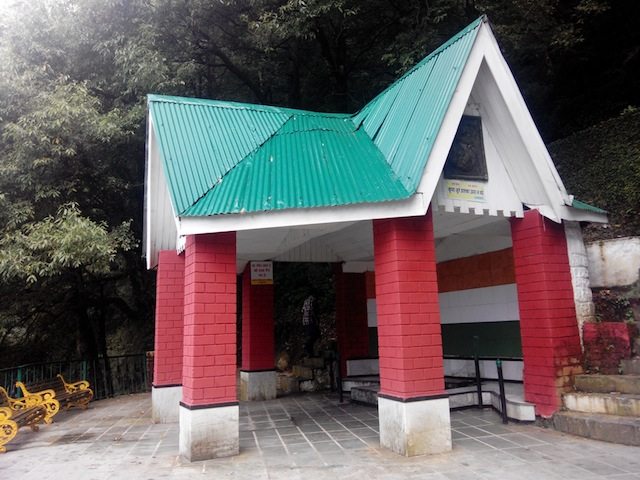 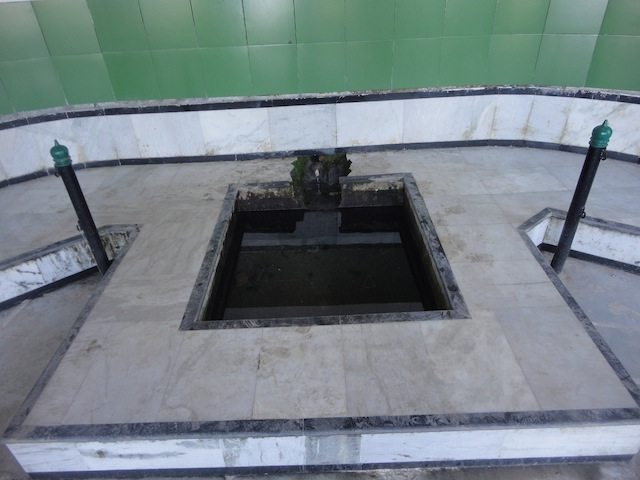 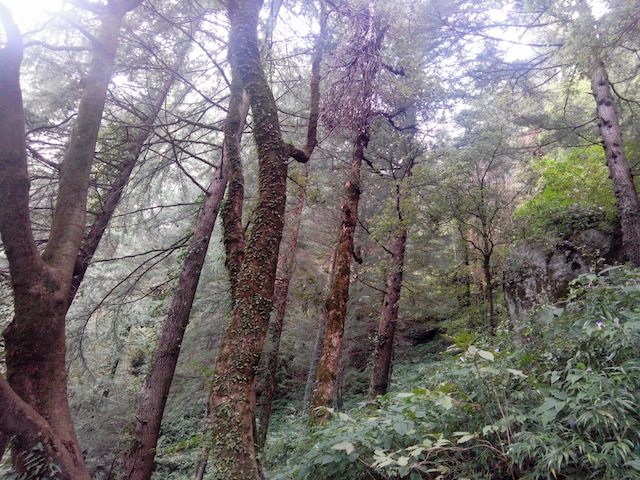 The deep forest behind Subhas bowli

Next we moved to Punchpulla area, where statue of another freedom fighter legend Sardar Ajit Singh stood tall. We visited his memorial area. There was small lake behind the statue, where paddle boating facility was available. On the opposite hill top, a temple was there. Beside the memorial, the hilly way went upward through the shopping area. Following the ascent, we reached upto a waterfall. It was a mediam sized one, but enjoyable. A couple of fast food shops were available there to cater the tourists. All of us enjoyed the area. We had hot coffee with freshly fried snacks and spent some tranquil moments there. 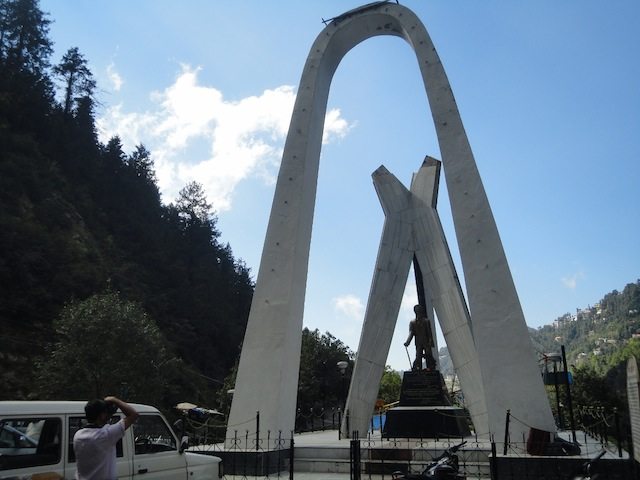 The memorial of Sardar Ajit Singh 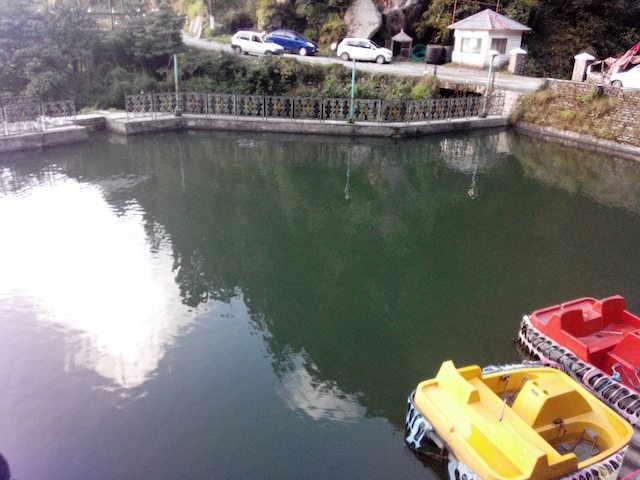 The paddle boating facility beside memorial of Sardar Ajit Singh 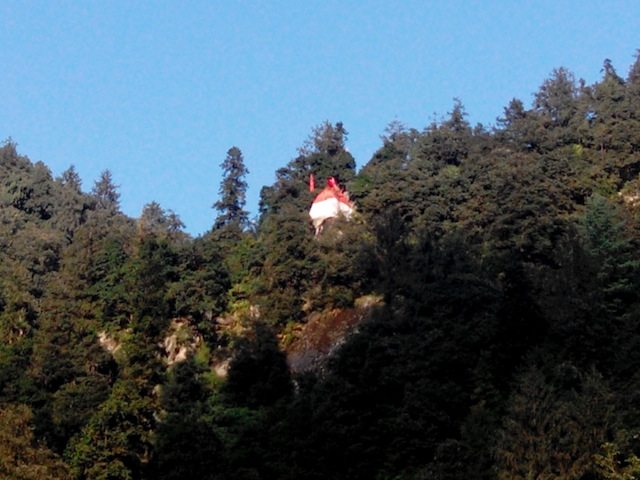 A temple high above in the facing hill 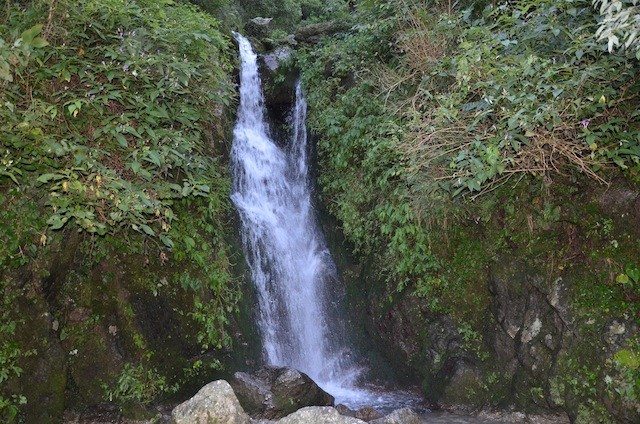 While coming back, we got down at GPO mall (now known as Gandhi chowk). A statue of Gandhiji somehow found its place there. It’s a central area, where people meet and chat. Tourists used to eat and buy local products at this place. Some restaurants are also available around this mall area. When we reached this place, the sun had just set. There was evening glow in the sky. We walked along the road towards Subhas chowk keeping a constant look at the distantly placed mountain range on the right side. Some hotels came in between which disrupted the view of the horizon. But still then the scenic beauty was unparallel. The memorable walk from Gandhi chowk to Subhas chowk took apprx half an hour in the moonlit evening.

After reaching Subhash Chowk, we did not get inside our hotel, but preferred to spend the evening outside. The area surrounding the statue of Netaji was actually a parking lot. We crossed all the vehicles and reached at the extreme corner of the hill. The nearly full moon was glowing with vigour. We were looking at the adjacent hills, which were flooded with the soft radiance of the moon. The beauty of a hill in daylight carries a different perspective. But the beauty of the same hill at night opens up a new world. The cool breeze, the soundless atmosphere and the hills glowing with milky white moon light made us speechless. We spent countless quiet moments and continued to enjoy the atmosphere. 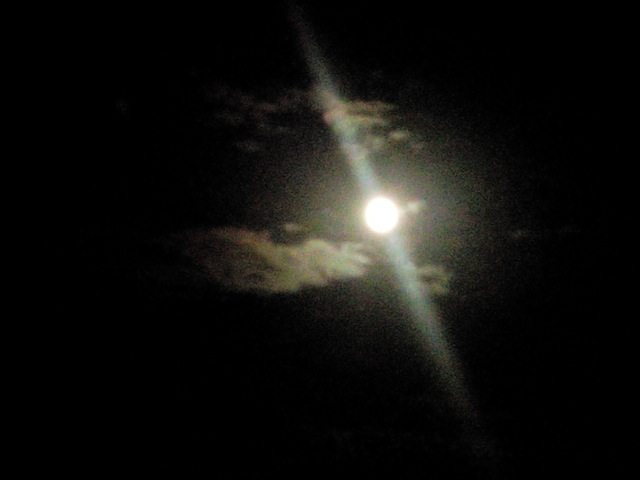 The glowing moon in the night sky

But, then we remembered that a hectic schedule was waiting for us tomorrow. So leaving behind the divine beauty, we returned to the hotel by dragging our unwilling body. We had our dinner and bid goodbye to the enchanting night.

Chamba and Mani Mahesh got replaced by Dalhousie was last modified: September 22nd, 2022 by SANTANU

This post is in continuation with my last post Delhi-Vadodara-Delhi Road Trip (Part -1). Starting from Delhi, with a stop-over at Udaipur, we arrived…