The second part of my trip took me from Delhi to Bangalore a whooping distance of over 2000kms. The journey was divided into four driving days
Day One – Delhi to Sagar. 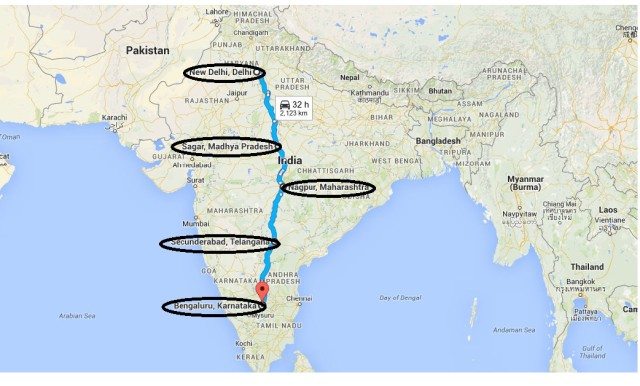 I was staying in west Delhi I knew that I have to start early in order to beat the traffic before I reach the Delhi – Agra expressway. So we packed up and started at six in the morning and by six thirty we were on the expressway. Driving in Delhi is actually enjoyed early in the morning, no traffic, no pollution and no unnecessary honking, it is serene almost benediction. I shall not write about the Delhi – Agra expressway as it has been commented about in various forums, however I only wished that the expressway ended a little better, we had to take a U turn and then drive through the Agra traffic to hit the Gwalior highway, it was actually kind of an anti-climax. Luckily as we had started early we were able to do that stretch at nine in the morning before the traffic hits in.


The road till Gwalior was smooth and uneventful till short of Gwalior. The GPS kept referring to a Gwalior Bypass and I was skeptical and so I asked the policeman about the condition of the road. He was very enthusiastic and to quote him the road was so good that I would not be required to change the gear. I again confirmed whether he had been on this road, yes he promptly replied. Thirty km down the line I knew he was lying, the road which was fantastic initially soon started having an identity crisis, we were not sure whether it was a one way or a two way road and at certain places whether it was a road at all or just some construction material dumped by an angry contractor. With my car, potholes can be handled easily but even the mighty Safari groaned in what can be only be described as trench warfare. Imagine I driving the high and mighty Safari scraped the bottom of my car. All the time advantage gained by starting early, driving on the expressway was lost in that stretch of 120 km. The ordeal continued till short of Jhansi where we has a deja-vu moment short of Jhansi there was a another road which was tempting and going left and there was another policeman standing .
‘How is this road” I asked.
“Very good, if you take that road, you don’t have to change the gear” it seems to be favourite comment down here.
I love taking risks and again I did what the policeman asked, and boy was I lucky, it turned out to be the best part of the journey. The NH 26 or the AH 43 as Google Maps refer to it is in my view comparable to the Delhi Agra expressway even though it was four lane instead of six. The road quality was excellent, not a single pothole, sparse traffic and most importantly no intersections, all roads leading into and out of the highway branched out beautifully. The best part was the surroundings, you had gentle rolling fields on both sides of the road, beautiful lakes, Shahjad Reservoir near Jamalpur and Gobind Sagar just South of Lalitpur. The scenery was breath-taking, the road awesome and that too in Madhya Pradesh which about ten years ago could be chided for having the worst roads in the country. There are just two negative points in the road, one there is just about no eating joint, we were lucky to have carried packed food, second the road unlike the expressway is not fenced thus we have a huge variety of domestic animal moving on the road which affects the drive. We covered the 700 km from Delhi in nine hrs averaging 75kmph.

Day two– Sagar to Nagpur.
The next day we moved from Sagar to Nagpur a short hop of a journey with a distance of around 370 km. We got on to NH 26 in the morning and the road was as fantastic or the first 250 odd km but as we entered Pench Tiger reserve, it is the place where Sir Rudyard Kipling got the idea of writing about ‘Mowgli’ based on a feral child that was found in these forests. The road however was not as interesting as the stories, it narrowed down from a four lanes to two lanes that to without any divider and the quality of the road was awful, it seemed that the potholes had not been repaired since ages. The road turned and twisted as it traversed through the ghats in the forest and with every turn and climb, there would be an overloaded truck groaning to move up holding all cars following to ransom. Interestingly from Jhansi till Pench, we saw no vehicle that had met with an accident, but is the short stretch of the tiger reserve there were five of them lying on the roadside severely damaged. Good roads actually prevent accidents. While it is understandable and probably correctly that the forest land is not being allocated for road construction, but it should not be a major problem in repairing the existing road. Short of Nagpur we were again on NH 26 hoverer the road had lost some of the charm, the branching away roads were replaced by frequent intersection and the local traffic crossing affected the speed. We covered the distance of 374 km in 5hr 30 min averaging at a speed of 68 kmph.

Day Three – Nagpur to Secundrabad.
The road from Nagpur to Hyderabad is a love hate relationship the moment you start loving the road it turns horrid, we started early, a strategy that has helped us get out cities in time and got on the NH 7. The road starts off well, it is a four lane road with good quality tarmac, however you can’t drive fast because of the intersections en-route which force you to slow down. The road starts getting bad after Hinganghat and remains so for the next 120 odd km till Adilabad. Many bloggers have rated it the worst road they have travelled but I did not find it that bad, the worst road in my journey still remained the Gwalior Bypass. The road turns beautiful after Adilabad all the way to Hyderabad, the number of eating joints increase serving South Indian with the wonderful filter coffee. A lot of roadside eateries here serve non vegetarian food which is a departure from where I stared the journey. We finished the journey of 540km in nine and half hours averaging a speed of 57 kmph. The drop in speed is basically because of the Hinganghat – Adilabad section.

Day four – Secundrabad to Bangalore.
The last leg of the journey was a breeze the road quality was excellent, the traffic was sparse initially but kept on increasing as we approached Bangalore. One has to be careful while driving on this stretch as the highway passes through numerous villages and almost every village has an intersection, and each intersection has a gargantuan speed breaker. So you can push the cars at some stretches but then you have to bring it to a screeching halt to avoid damaging the car on the speed breaker. One advantage was that there were plentiful eating joints on the route, and surprisingly quite a few liquor shops as well, this I found to be a dichotomy. The last part of the journey which was 585 km was completed in seven hours and fifteen minutes averaging a speed of 81 kmph.
The journey from Delhi to Bangalore was wonderful we covered a total of 2119 km in a little over 31 driving hours taking out rest days, golf breaks and meeting friends making an average speed of 69 kmph. I have been driving long distances for the last twenty years and this kind of a long journey with such high average speeds was impossible about ten years back . With the condition of roads improving driving between towns is becoming an attractive way to travel and as you do you realise and learn to appreciate the beauty of the country we stay in. The countryside especially on NH 26 was picturesque and fascinating with green fields stretching on either side with an odd hutment or a temple. Overall my best stretch of road was from Jhansi till Pench Tiger reserve and the worst was from Gwalior Bypass till Jhansi both the stretches are surprisingly in Madhya Pradesh.
So guys just rev up the engine and go for the drive.

A travelohlic who has been driving for the last decade on all possible routes and sometimes where even routes do not exist. I believe that this country can be best experienced by road