Jallianwala Bagh. We were familiar with this name since school days. It is located in the heart of Amritsar, which has taken a permanent place in Indian freedom struggle. Mass killing of thousands of immortal children of Bharat Mata on 13TH April 1919, the day of Baisakhi – a festival in Punjab and the rest of the country, as per direction of Brigadier General R.E.H. Dyer resulted acidic reaction throughout the Indian sub-continent. Though official report stated 379 fatalities, but Civil Surgeon Dr.Smith indicated that there were 1,526 casualties. The unprecedented inhuman brutality exhibited by military power prompted all the leaders of the Indian freedom movement to criticize the incident. Even Shri Rabindra Nath Tagore was so shocked, disturbed and grief striken that he returned the Knighthood award to the British authority by writing a historical letter to Lord Chelmsford on 30th May 1919. Later on, following the verdict of Hunter commission, Brigadier General R.E.H. Dyer declared guilty of a mistaken notion of duty and was relieved of his command and prematurely retired from the army. 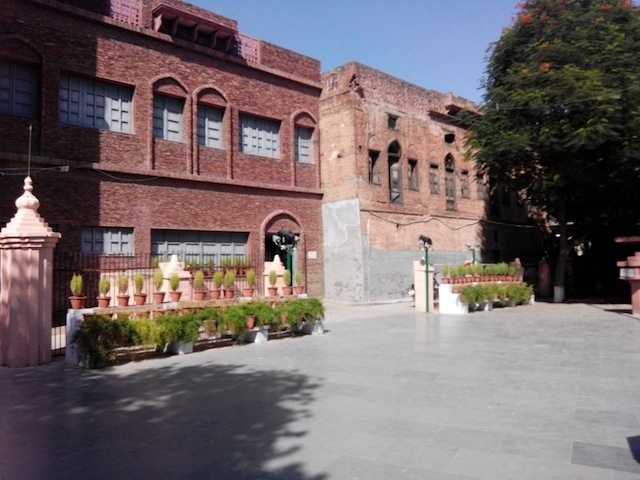 Inside The Jallianwalla Bagh

From the Golden Temple, we reached the park at around 2.20 pm by walking, as both of the historical premises were closely situated. The park is approximately 6.5 Acre in size, managed by Jallianwala Bagh National Memorial Trust. The entrance was through a narrow lane. But once we reached the park, there was greenery and many historical structures. At the entrance there is a memorial plaque which recounts the history. We saw the walls of the park that carried bullet marks, right from knee level upto a height of about 13-14 feet. To easily identify the bullet marks, or rather holes, rectangular shaped white coloured borders have been painted. Apart from the boundary walls, other age-old structures situated within the park also carried sign of military brutality. There was a martyr’s well also situated inside the park. Many people jumped inside the well to avoid firing. However, they died subsequently. A plaque displayed a fact that 120 bodies were pulled out of the well. There was a monument, named the Flame of Liberty, that was inaugurated on 13 April 1961 by Dr. Rajendra Prasad, the first President of India. The central 30-ft high pylon, a four-sided tapering stature of red stone standing in the midst of a shallow tank, is built with Ashoka Chakra, the national emblem. A stone lantern stands at each corner of the tank. On all four sides of the pylon the words, “In memory of martyrs, 13 April 1919”, has been inscribed in Hindi, Punjabi, Urdu and English.

The bullet holes, right from knee height level upto the topmost level, to ensure that none should be spared from being shot 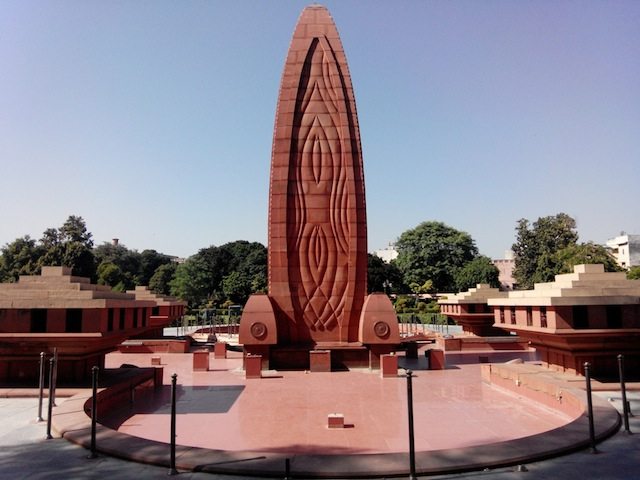 The memorial : Remembering the martyrs respectfully

The well, inside which people jumped to save their life, only to be dead within minutes 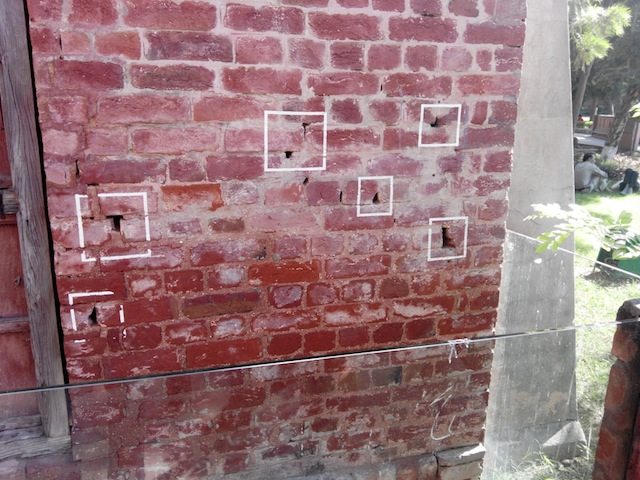 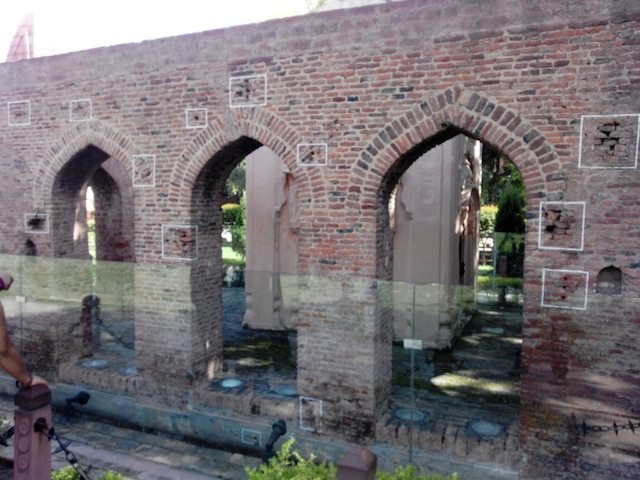 There is a museum, very rich in contents, where photographs of various freedom fighters are displayed. But photography is strictly prohibited. One, who visits the museum, can refresh history classes of Indian freedom struggle once again.

Switch to circa 2016, a visit to Attari Border

Leaving behind the humbling visit to Jallianwala Bagh, we proceeded towards Attari border at around 2.50 pm. On way, we had our lunch at a nice farmhouse type dhaba nearer to the border. The 30 km journey was smooth, thanks to the authority that maintains such glass top road. 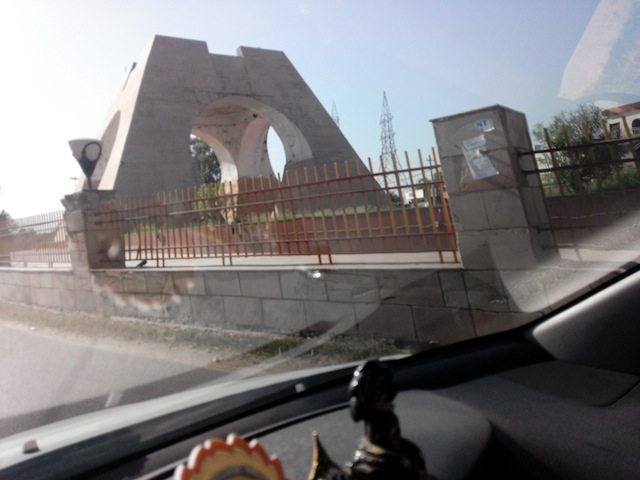 Passing a memorial in Amritsar, on way to Attari

Rules and regulations governing visit of a tourist to the border are interesting. A general class tourist (one who does not belong to VIP catergory) has to park the vehicle in the specified parking lot, placed more than a kilometre away from the border. So you have to walk this distance (alongwith children, elderly persons etc.) and have to pass through intermittent security check time and again. You can carry mobile phone and camera, but not the camera bag, or any other bag. One important point to mention that in the border area, mobile telephone network is non-existing. So once you are physically separated from your companion / group, it will be extremely difficult to reunite. So maintaining close proximity with one another is very important. Making a proper return plan and finding out you driver is also important. 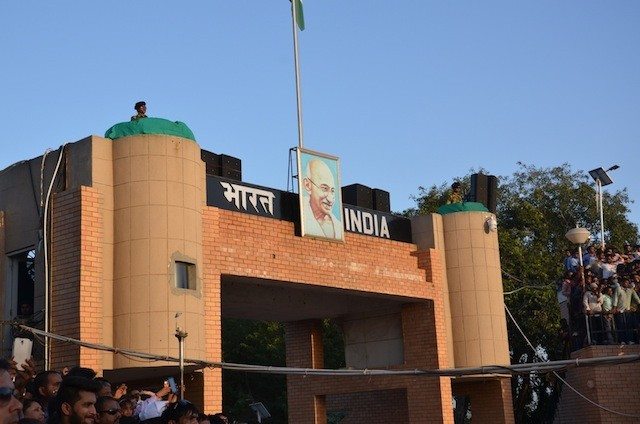 The Swarn Jayanti Dwar at the Attari border 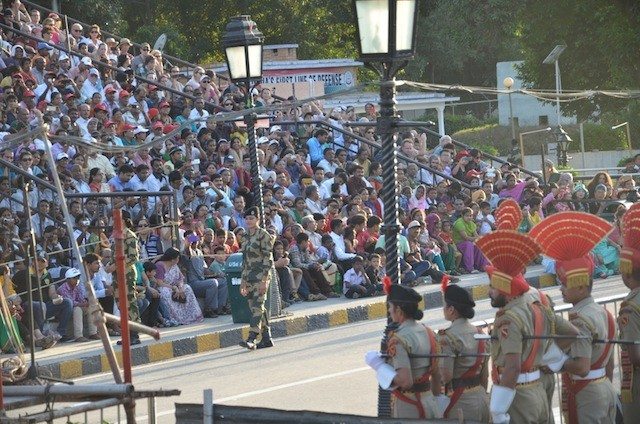 Security personnel and participants to the closing ceremony checking the readiness 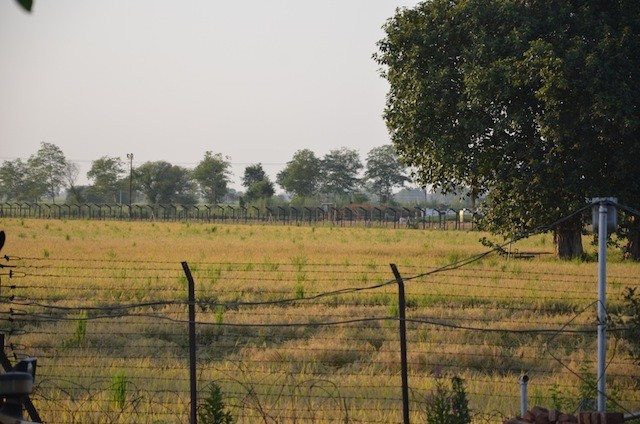 View of both the sides of the border : Any difference?

We reached the gallery area at around 4.45 pm. The sun was pouring fire onto us, as we were roasting under open sky helplessly. Everybody was trying to cover their head and face with handkerchief or dupatta. As we reached late, we got accommodated at a remote place in the gallery. Patriotic songs were being played in public address system seamlessly. The road lying between the galleries was under continuous security surveillance, undertaken by male and ladies security persons, sometimes with sniffer dogs. There were security persons on top corners of both the sides of Swarn Jayanti Dwar. Sometimes, young girls were coming down from the galleries to parade on the road with national flag. The Pakistani galleries were also visible from the Indian side. Then the flag ceremony started, which is called the beating retreat border ceremony on the international level. It is conducted jointly by Border Security Force of India and Pakistan Rangers, known to be performed since 1959. We witnessed powerful display of drill, characterized by elaborate and rapid dance-like manoeuvre. This practice ended with opening of the iron gates of both sides of the border and lowering of the two flags simultaneously. After a while gates were closed. All the visitors got down from galleries and walked towards the car parking space placed a kilometre away in the twilight of dusk. 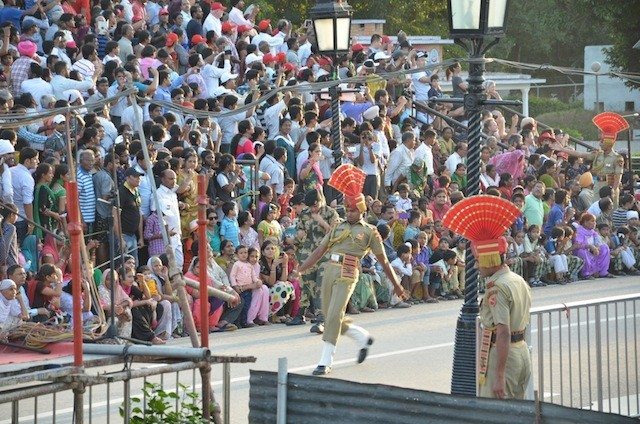 The powerful drill and parade going on 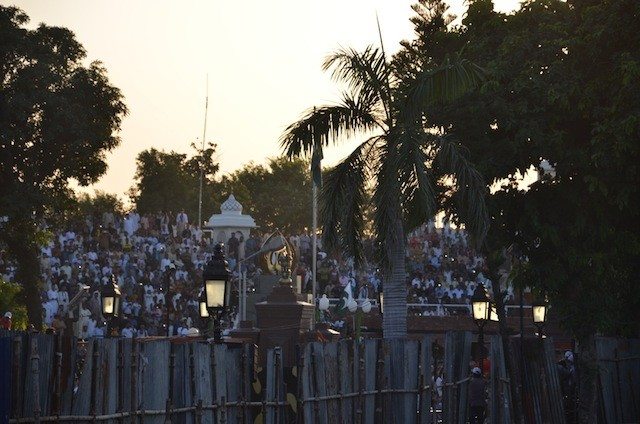 The Pakistani spectators on their side. Screens of most of their mobile phones are glowing

The return journey was un-eventful but pleasant. All of us were tired. We had been travelling since 24th September 2015 and were passing through the last lap. So many places we visited, which I narrated since the 1st travelogue of this series. After reaching Pathankot, we had our dinner near a place called Post Office Chowk. Then we reached railway station. Our chauffeur cum guide Deepak bid goodbye. Being a good Samaritan, he gave us nice company all along. We shared many personal views and family storeys during our car journey. Gradually he had become my friend and entered into my Whatsapp contact list.

At around 2.30 am on 1st October 2015, we boarded Shri Shakti Express (22462) and reached New Delhi at 11 am comfortably. Swaraj and his parents had separate travel plan to go to Agra and Fatehpur Sikri. So we departed at Delhi. On same day, I caught Kolkata Rajdhani Express (12302), which reached me Kolkata on 2nd October without any trouble. I was back to home sweet home again after completing the memorable trip.

Leaving behind whisper of Deodar trees of Dayan Kund, gushing appeal of Bhagsu Nag falls, majestic churches of McLeodganj, Tibetan museum and Namgyal Monastery of Dharamshala, divine temples throughout Himachal, greenery of Palampur, peace of Harimandar sahib, sacrifice of martyrs at Jallianwala Bagh and exhibition of power at Attari border, I again got ready to start yet another urban workaholic week, with a dream to go out somewhere again in near future. I am a ghumakkar after all.