Istanbul is an interesting place with loads of history, heritage and character. Even though it is not the capital of Turkey (capital is Ankara), it is the center of Turkey in all respects. It is the only city in the world located on two continents – Asia & Europe. There is a natural, narrow link called Bosphorus between Black Sea & Marmara sea which defines the border between the continents and Istanbul is situated on both its sides. The place is said to depict fusion of East & West, Asia & Europe, Christian and Islamic culture & traditions.

I managed to visit it thanks to Turkish airlines. Our return flight from Milan to Mumbai had 9 hours layover. Turkish airlines themselves provide free tours for their international transit passengers with layover more than 6 hours. The tour is free including Lunch and museum tickets. Passengers only need to get tourist e-Visa for 20 dollars from Turkish visa website which is as easy as online shopping. The timing of our incoming and outgoing flights was perfectly matching to their 12-6 pm tour. Once the flight landed we made our way to Turkish airline’s Hotel desk situated outside the airport. We waited at adjacent Starbucks outlet while waiting for tour to start and collected Turkish currency as souvenir.

At 12 noon we started the tour in a mini-bus. Our tour guide was a charming Turkish lady who explained things very well. We were taken to a restaurant adjacent to Bosphorus waterfront. The day was bright, sunny, a little warm and a Sunday. We could see lots of tourist along the way. Lots of people were angling in the Bosphorus along the promenade. We even managed to see dolphins jumping out of water from a distance which we are told is common sight here. The food was a modest 3 course meal – soup, main course and sweets.

We finished the food quickly and made our way to Sultanahmet area which hosts all the historical monuments and places of interest from Byzantine and Ottoman empire.

This area before Ottoman empire was known as Hippodrome, a sporting arena during Byzantine times where horse racing and other spectator sports were conducted. As it turned out we were going to venture only around this complex and not going to be taken anywhere else due to limited time. So just like Milan and Lugano we are going to spend only few hours here.

There are three main pillar-like monuments from Hippodrome time frame. First up is Walled Obelisk which is a stone pillar built by Constantine VII. It is also known as Constantine Obelisk.

Then there is another one called Obelisk of Theodosius, which is an ancient Egyptian pillar transported and erected here.

Last is a serpent column which has three snakes coiled together. It used to have three serpent heads but they are now vandalized.

Next is Sultanahemet mosque or Blue mosque as is popularly known. There was a prayer going on so we could not go inside but we entered the courtyard which was domed passage around it. The mosque has richly carved conical pillars at each corner which were beautiful to look at against the blue sky.

Our guide was quite efficient giving us just enough time to marvel, take pictures and immediately giving marching orders. There is a vantage point from where to look at the mosque in its full glory. There are benches perhaps for pilgrims and there’s a fountain as well. 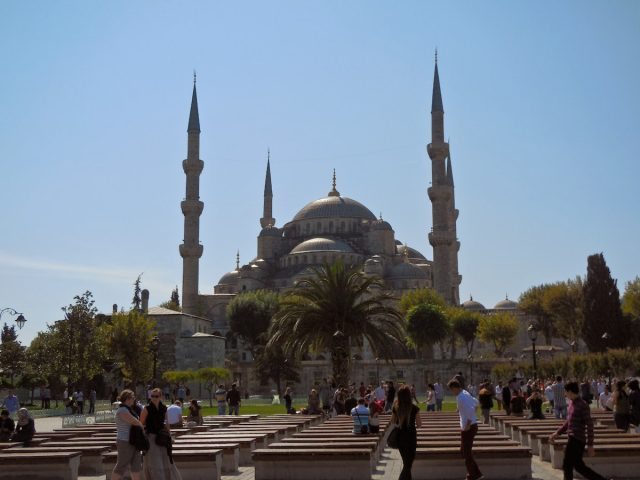 We then proceeded to Basilica Cistern which is an underground water filtration and storage system constructed during Byzantine period. It is only one of the hundreds of still not discovered cistern under the city of Istanbul. The place is absolutely amazing with platforms to walk around and cleverly placed dimmed orange lights keeping the ambiance dark & spooky mostly. The place was cool and one could spot fishes in the water. At one end of the cistern there are couple of stone blocks with sculpture of Medusa placed under the pillars. There is an interesting story about Medusa and it is unknown who brought these stones to Istanbul and why they are placed like this.

There is another monument known as Hagia Sophia used to be a basilica during Byzantine, then later converted to mosque during Ottoman and now is a museum. We did not have time to visit the museum so just admired it from outside.

After this we went to the final destination Topkapi palace which was residence and seat of power of Ottoman sultans. It houses gardens, structures, rooms depicting art, craft & architecture of that time. Some of the things on display were lifestyle items of Ottoman sultans like their costumes, jewellery, weapons etc. I was reminded of Salar Jung museum in Hyderabad which displays equally ostentatious items. Apparently Ottomans were equal connoisseurs of art & crafts.

The good thing about Topkapi palace was there were a few vantage points from where one could get panoramic view of Bosphorus, the sprawling city and the bridge connecting Europe and Asia. Bosphorus with its sparkling aquamarine water had few white & colored boats criss-crossing the strait leaving a white trail in the water. That particular day it was sunniest and light was perfect for gazing at the view. No wonder, most of the crowd was looking at this view.

After having a good view and some rest we came out of the Topkapi palace from where we were taken back to the airport. Our guide advised some of the passengers who had flights even later in the evening to drop-off and visit some of the places which we could not cover like Spice market, Galata Tower and Taksim square which is like center of Istanbul. There is good public transport available to go around the city and back to the airport. My take on this short trip was that we had just scratched the surface of this rich city. It would require at least few days to really experience the place.