Today we were destined for a tour of Havelock & Neil island. This trip comes close to touring exotic islands which are well developed in India! They are staple to any holiday to Andaman & Nicobar and even a honeymoon destination. 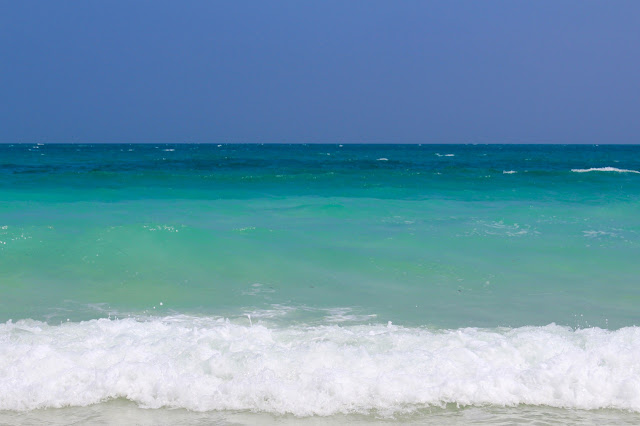 We were booked on a fast-cruise boat run by a private company Makruzz. Its an air-conditioned cruise boat seating passengers in three different classes. The boat leaves from Phoenix jetty which has a number of new & old, ships berthed undergoing maintenance. While we had time to board the boat, I just roamed in the other side of port and admired the voyages these forlorn boats must have taken. What kind of adventures and activities these boats would have seen. Sea-faring is such an old traditional activity full of fables of adventure that watching an old ship is fascinating. One of the reasons probably cause they go to places which are unseen and mysterious. Flying which has come up only in last century doesn’t have that much of history but then there is no life up there. Even flights when they crash land up in sea :) 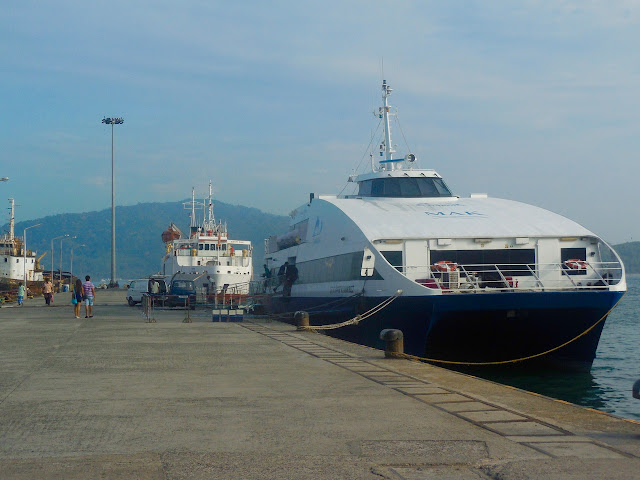 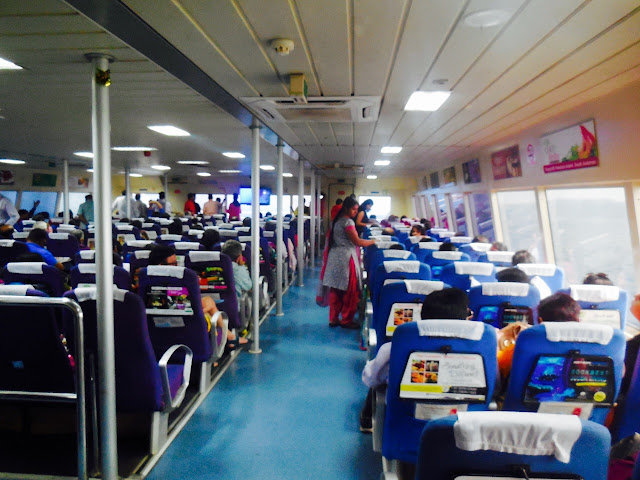 At the Makruzz counter we were given airline like boarding passes and large luggage was checked-in just like airlines but this was carried in hand-carts by porters. Finally, we got the go ahead to board the boat. Inside it was like an air-conditioned bus, just a little wide. There were sea-hostesses and snacks shop as well. Soon we were were on our way and ride was like a Volvo bus ride. The sea was not rough but enough to cause vomiting for some folks. The attendants stood in front of seating to hand-out vomit bags to whoever wanted. It is an hour and half ride to Havelock. 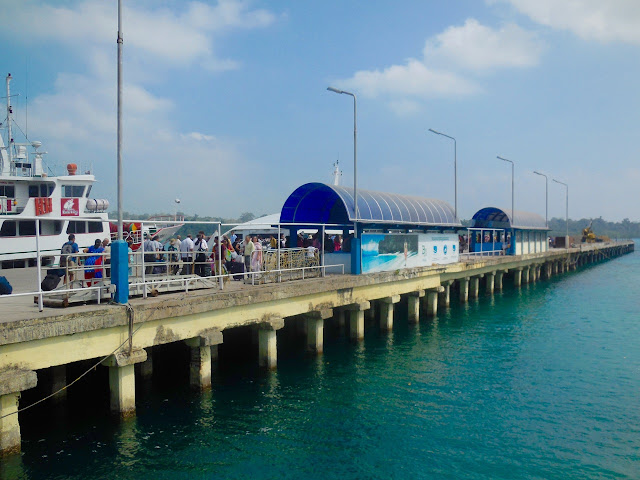 There we were received by another person who coordinated with our tour operator in Port Blair. We even carried his payment with us given by our tour operator! The life on these islands are centred around the jetty and island comes alive by arrival of a ship. We were immediately transferred to our hotel Gold India beach resort. It is on sea shore and while climbing first floor to our room, had a glimpse of tantalising turquoise blue, aqua marine water and white sandy beach.

There are only a couple of things people do in Havelock, first being scuba-diving and other sight-seeing various beaches. The beaches are Kala Pathar (Black Stone) beach, Radha Nagar beach which are accessible by road and Elephant beach which is accessible by 20-minute boat ride. Havelock has Goa like atmosphere with foreign & indian tourists alike, good hotels and restaurants, attractive beaches and water sports. We did not do scuba and neither visited Elephant beach as we were here only for a day. It is better to spend at least 2 days here to experience everything.

We went to Kala Pathar beach first which was amazingly beautiful. The sun was high and it was brightly lit but not very hot due to breeze. The water had all the hues and shades of turquoise, blue, green and everything in between. We went up and down the stretch. The beach is not wide and is lined with mangroves and trees beyond. While walking if we felt, we could quickly get into the shade of the trees. At some places, uprooted trees were lying on the beach lending themselves to be beautiful props to sit or be photographed. At the other end, there were some rocks which we climbed and had a nice deep view of the sea. Near the entry point of beach were couple of hammocks put up by local shops selling coconut water. I wished if we could stay there for the whole day lying in hammock admiring the waters and reading a book with shops supplying coconut water. Wow, what experience would that be. But alas, we tourists are always short of time and have to leave to visit other places too. 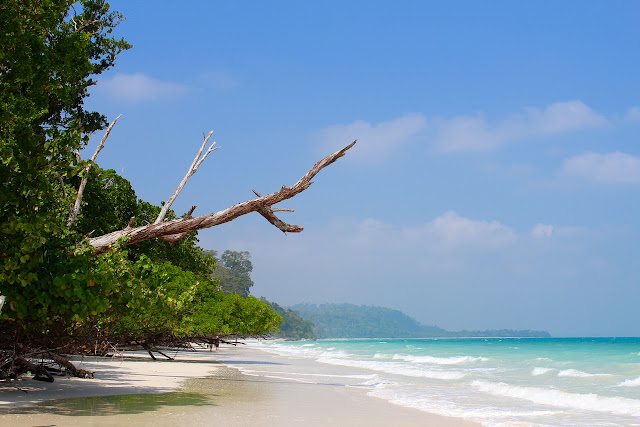 Mangroves beside the beach 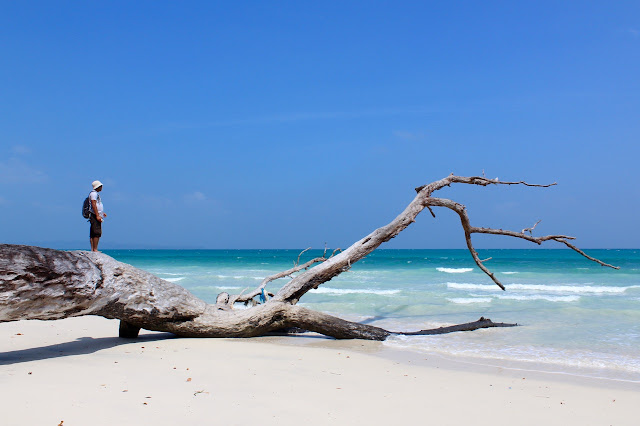 For lunch we went to Andaman bubbles which was recommended by sister apart from Anju’s coco where we went for dinner. The food was great and had nice setting. Seating on cushions on ground and walls adorned with old photographs of Andamans.

After resting for some time in the hotel, we went to famous Radha Nagar beach. If Kala Pathar was narrow beach, this was a wide expanse. One could easily spend hours in solitude walking the beach without being disturbed. Here we did enter the waters and bathed for quite some time. There was a cloak room in a shack and changing rooms available for convenience. Sunset was great though it happened in clouds but the shimmering amber on water was beautiful. At the exit there were lots of small shops which sprung up selling tea and refreshments. 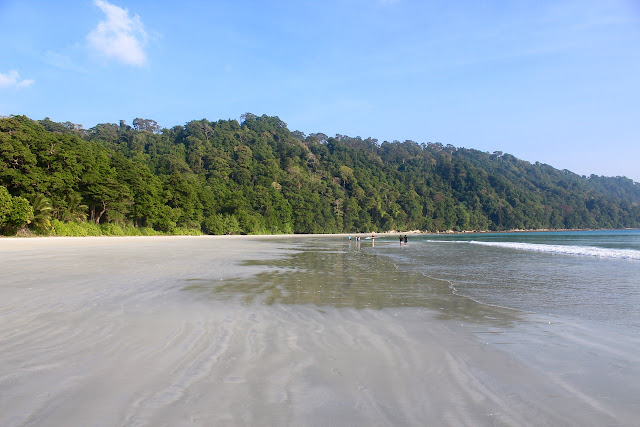 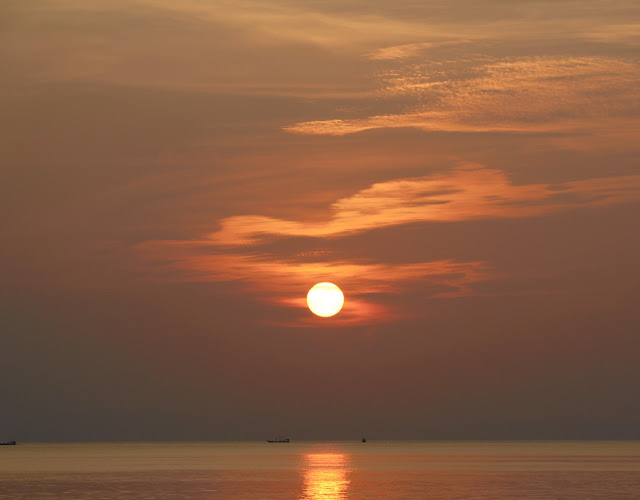 For the dinner, we went to Anju’s coco which is probably the most famous & lively and good ambience restaurant in Havelock. They have Indian, continental and other varieties. We had a combo of rice and Red-Snapper which is the staple fish here with some cocktails. That ended the day for us.

Today we were to go to Neil island again by same Makruzz cruise. We came to Havelock jetty but incoming boat was delayed. The boat does a full round of Port Blair – Havelock – Neil Island – Port Blair everyday. Here we didn’t get any boarding pass, just a show of printed ticket. While we waited, I ventured into the town to have a glimpse of local life. Just a little away from jetty a boat was getting unloaded with night’s catch of Red-snapper fish. We were having refreshing coconut water and spotted our boat approaching very far. Finally after 20 minutes the boat docked and we were off to Neil. 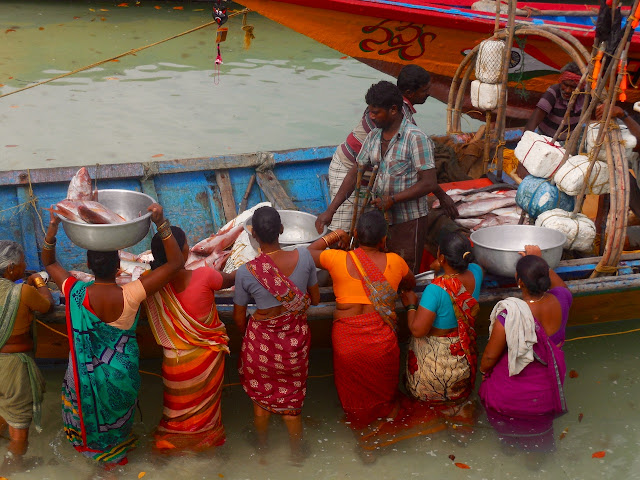 Catch of Red-Snapper fish in Havelock 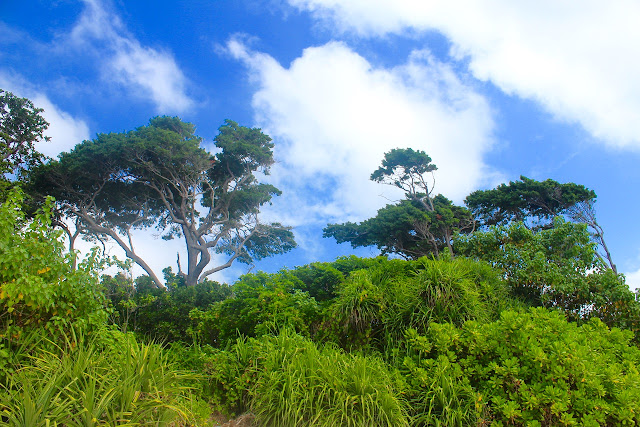 Not sure where the naming came from. Ramnagar was just a little walk away from our hotel which we visited. Then we went to Coral point which has open-air coral rocks due to low water level. Saw the famous brain coral over there. This place is strewn with beautiful dead-corals which are washed up to the beach and one is tempted to pick them up as souvenir but beware that it is a crime to take the corals away from the island! 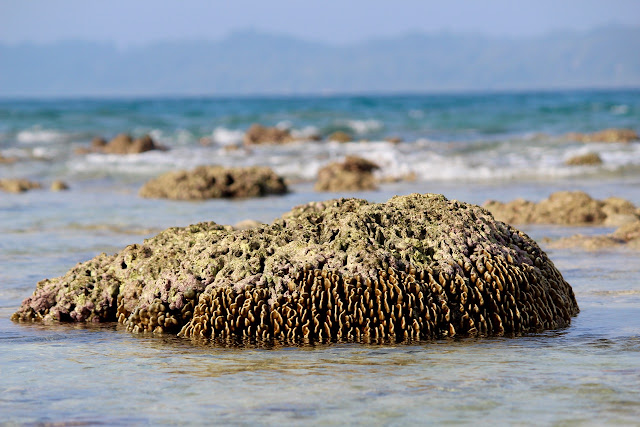 Lakshmanpur beach is more prominent and has a natural bridge formation which is basically an arch of rocks with passage underneath. I would rather call it a tunnel than a bridge as one can pass through that arch. Here also the coral rocks were much closer so on low tide, there are pools of water created where we can admire the coral life in leisure. There were colorful fishes, sea cucumber, star fishes and different types of corals visible in those pools. We walked past natural bridge and there was another such formation more like a hole in the hill but quite far to walk. 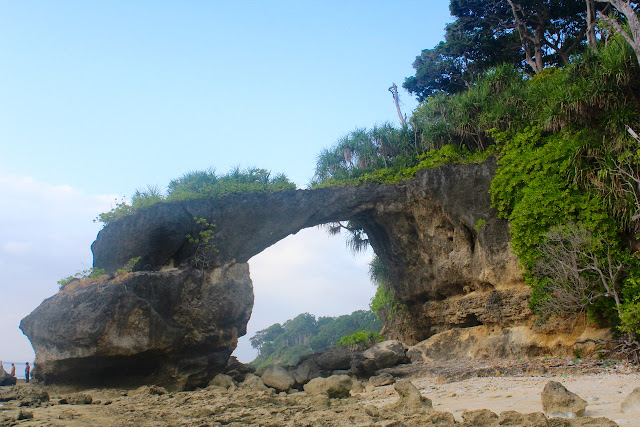 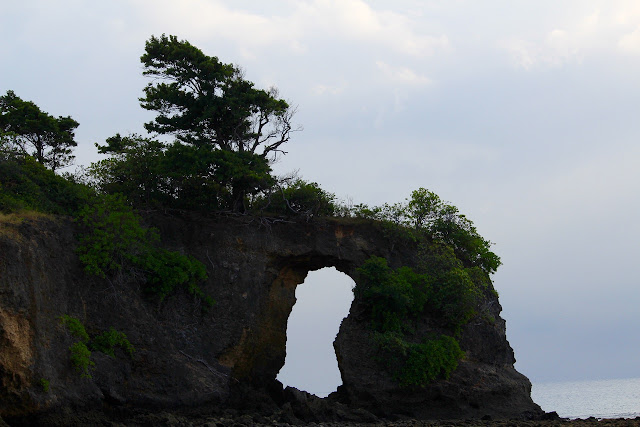 Another hole in wall 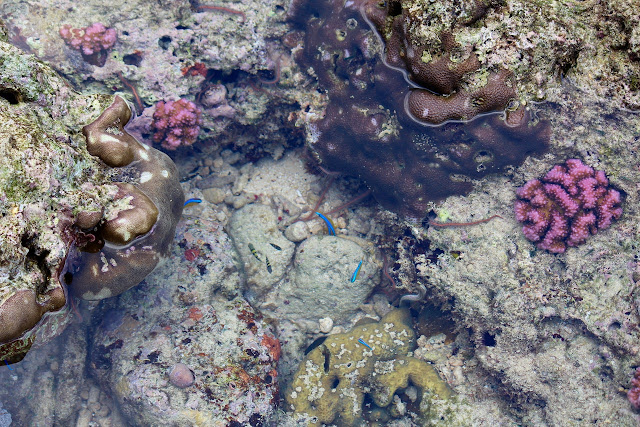 Fish and corals in a pool

Neil is much smaller and so has much less options in terms of restaurants so we had lunch, dinner at the hotel itself. That ended the day for us in Neil.

Today we were to go back to Port Blair but had time in the morning. The weather had changed over night. It became cloudy, dark and windy but we still visited Sitapur beach in the morning. The dark cloud, high wind and rough sea gave us a glimpse of how monsoon would be in these islands. 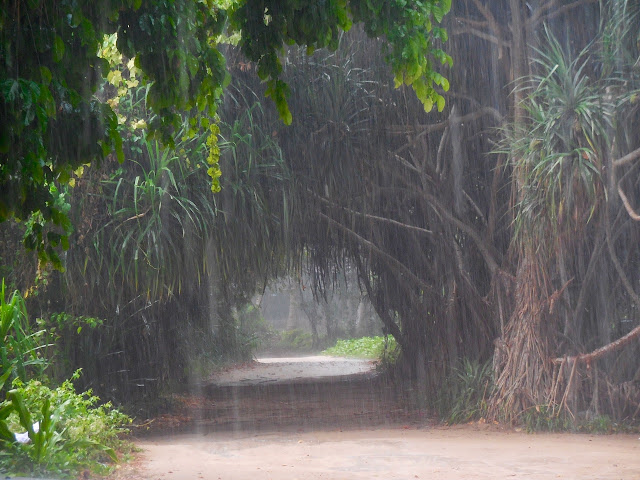 We came to Neil jetty which is on Bharatpur beach. For breakfast, our driver took us to Port Management’s canteen which opens early. Since we had time, we went on an exclusive glass bottom boat ride to see the corals around and also into the mangroves. This time we lied down on the glass bottom and covered eyes to see the coral life but it was again an average fair. Only once we had a wow moment when we saw a a group of sardines swimming together. While in mangroves we climbed onto one of them for photo op and we came back to the beach. 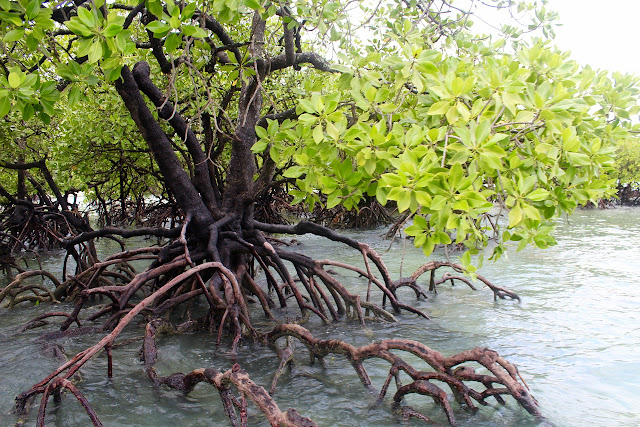 The ride back in the Makruzz was a little wobbly due to weather but now we were kind of used to it. It took another hour and half to come back to Port Blair.