Not All Who Wander Are Lost

Warm Greetings to you all!

It’s been an amazing journey at Ghumakkar since I joined here. Am I not known to you? O ho! Then here is my intro. I am also a Ghumakkar like you and my name is Anupam Chakraborty. Yes, that’s it. I’ve nothing much to say about except the following:

I have written my experiences on Amarnath Yatra at Ghumakkar and I believe you have read that. But in case you have missed the story you may find it here (Amarnath Yatra: A Journey of Faith). On my returning back at home from Amarnath Yatra, I wrote a letter to the Governor, Jammu & Kashimir, and then to Mr. Nandan Jha, founder of this site. I was replied by the Governor with assurances, and encouraged extremely by Mr. Jha to share the same with you all.

Before I write what went wrong during the yatra, let me share with you a little piece of information. In the year 2012, expressing shock over growing number of Amarnath pilgrims’ death, which went over 100, the Supreme Court observed, “We are worried and want to ensure that no more deaths are caused.” Thereafter, a committee was set up and as per its recommendation the age criteria for pilgrimage was fixed as children not below the age of 13 years and persons not above the age of 75 years to undertake the Amarnathji Yatra. However, there were other recommendations too. Amarnath pilgrimage ended on that year with a record death toll. How sad was that!

It will be unfair on my part if I do not mention first the correspondences with Mr Nandan Jha before jumping into the facts that led to this writing.

The mail to the Governor and his office’s reply I forwarded to Mr Nandan Jha. It was then showering of praiseworthy and encouraging words from him. Mr Jha wrote to me, “This is extremely encouraging. We must accentuate the initiative at Ghumakkar”. In an another email, he wrote to me, “First of all, the act of following up with the right authorities needs celebration and this just be spread far and wide, so as to inculcate this as a normal thing to do. A lot of us just drop the ball. I am not too confident on any good action but hopefully if enough of us keep a vigil, things would improve.”

Thank you Nandan! Thank you very much for your support.

By an email dated 21.07.2014, I wrote the following observations to the Hon’ble Governor, Jammu & Kashmir. He is also the Chairman of Shri Amarnathji Shrine Board. 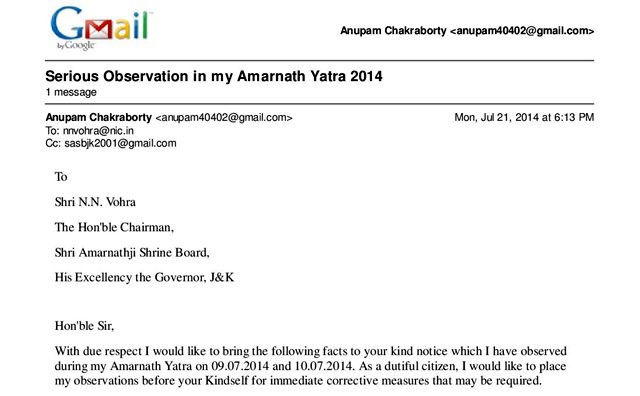 My email to the Governor (cropped first part only)

Observation No.1 (as I wrote to the Governor)

“Metal detector gate was not functioning for security checking in Chandanwari check gate on 09.07.2014. On enquiry it was replied by security person that the same went out of order.”

Observation No.2 (as I wrote to the Governor)

“I have noticed small children, who, I doubt understand the importance of this yatra, were undertaking it with their parents, both in Pahalgam and Baltal route. Near the Holy cave I saw some small kids were wearing colourful costumes and begging money from the pilgrims. I took photo of only one girl child as my intention was not to show all of them, but the fact. I also met with a mother of a child who was very happy to give a pose with her little one on her lap oblivious to the fact of hazardous atmosphere to which her little one was being exposed through.”

Photographs I sent to the Governor to substantiate the observations

The Kid in his mother’s lap. Age! Is he over 13 years Mr. Chairman?

The above Photo was taken on the road to Sangam Top just after crossing Panjtarani. (Motion Blur was due to my movement on the horseback). 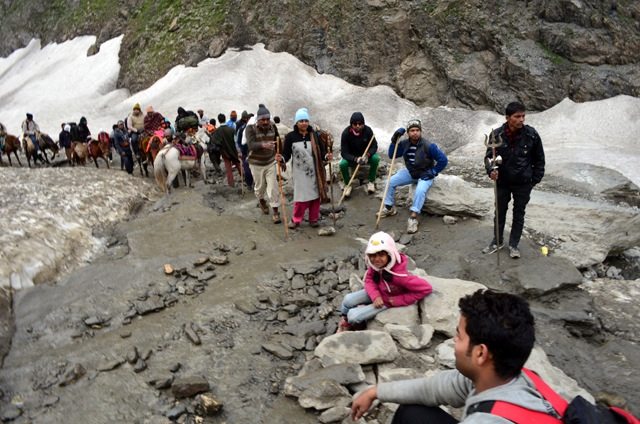 A little girl sitting on the way to Sangam Top

Alas! The girl in the above photo would not be more than 9-10 years. 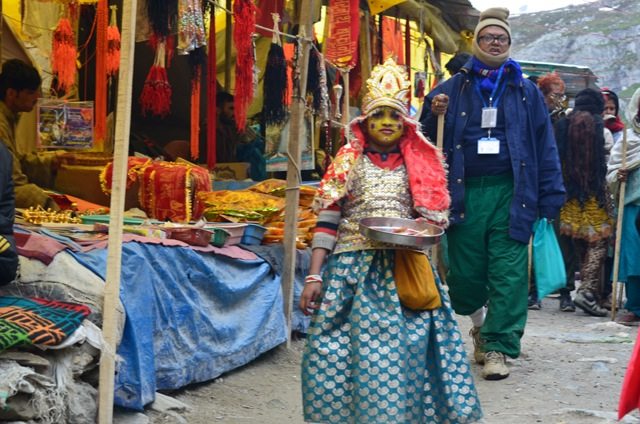 Girl in the colourful costume was from Mathura. Age! 9 years only.

What the girl in the above photo was doing there? Alas! She was begging. Can you imagine? At that far from her home town Mathura! I clicked the Photo near the Holy Cave. 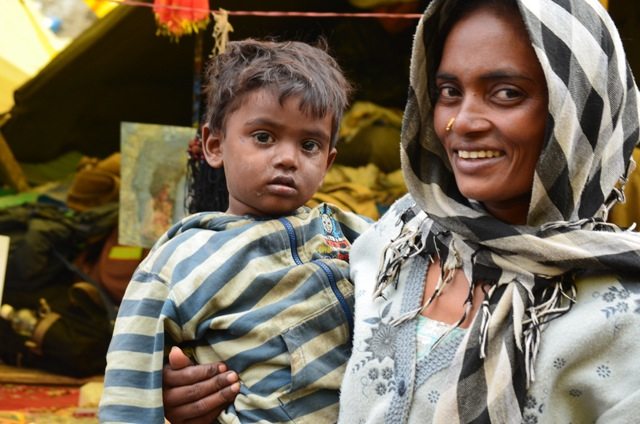 So sorry boy! Your mother might be unaware. But what your officials were doing, Mr. Chairman!

The above photo was taken near the Holy Cave. 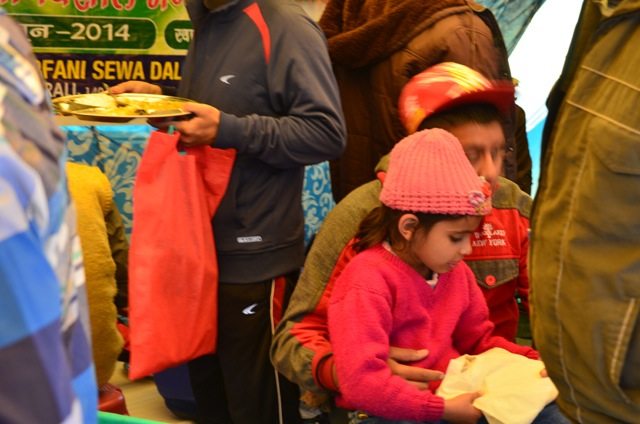 A girl inside a Bhandara near the cave, Age! 7-8 years

The boy of 7-8 years returning from the Holy cave

Isn’t it a time to ask the parents to grow up?

Observation No.3 (as I wrote to the Governor)

“I saw persons dressed like Brahmin/Pujari who were offering the thread binding on the wrist and Red Tilak and also noticed many beggars, some of them were physically handicapped (persons with one leg/artificial leg), all were sitting by the side of the stairs of the Holy Cave. They were begging from the pilgrims who were returning from the Holy cave after Darshan. Photographs are not allowed in this area, so I’ve no photograph.”

Dear friends, let me take you to the pages of history. Please read the recounting of Swami Vivekanda during his Amarnath Yatra 2nd August,1898 as below:

“I thought the ice-lingam was Shiva Himself. And there were no thievish Brahmins, no trade, nothing wrong. It was all worship. I never enjoyed any religious place so much!”

But my experiences as above were completely opposite and disturbing. I felt it to be my duty to inform the Governor, he being the Chairman of Shri Amarnathji Shrine Board. So I wrote and received from his office the reply below. 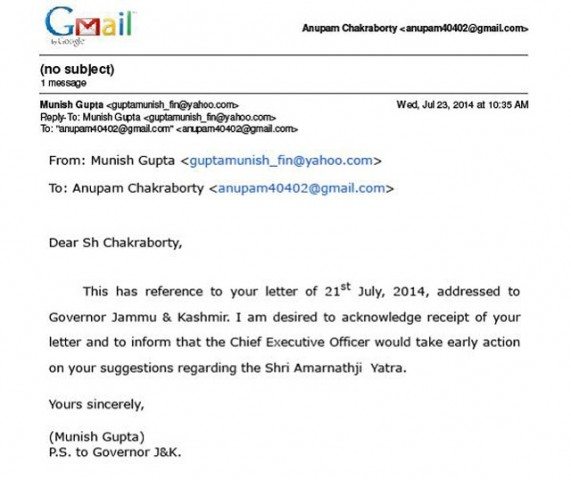 The Reply of Governor’s Office

We live in a busy world, everybody is engaged with his/her life so much that we hardly think of coming forward for changes, not even for the betterment of tourism. Even if we think initially of protesting when something happens, we resist the temptation well at the end. Our general doubtful mind consoles ourselves with some common phrases. “What will happen?”, “I doubt of any fruitful action” and “Nothing is going to change” etc etc and lastly, we shake off our responsibilities blaming the politician, “These Politicians! They ruined our country!”

So if we only drop the ball and do not come forward demanding action for the better future and for future travellers, it is we and our generation next to suffer. If we predispose that nothing will happen and do not come forward with our feedback to the right authorities, I see then little hope for the changes. The right authorities may never know a fact if we do not give our feedback. In the present case of mine, I doubt the field officials would have reported the Governor about the above facts. So there lies the importance of feedback. I too hope like Ghumakkar Team and believe that if we keep performing as a dutiful citizen then things would really improve for a better future and for future travelers.

Will you then come forward? Will you too contribute for the better future of travelling?

The last thing, I believe, all of us would like to see people throwing coins or notes on Akbar’s grave. Alas! He was the richest and most powerful king of his time. He never would have imagined that people would throw coins on his tomb stone. And not also we would like to see people scribbling love messages on our historical monuments. Can’t we start protesting against these nuisances? Can’t we preserve our heritage for an Incredible India?

“Its name is public opinion. It is held in reverence. It settles everything. Some think it is the voice of God.”______Mark Twain

Some words before I say bye to you.

A) I love to use zoom lens for taking close up photos of my subject from distant. But when I am real close to my subject, I shoot in either Aperture priority or Shutter priority mode keeping the flash off. I may even plant my man near to the subject to get the photo.

B) If I feel to send my feedback with respect to monuments and historical places I will then write to: The Director, Office of the Director General, The Archaeological Survey of India, Janpath, New Delhi – 110011. directorgeneralasi@gmail.com

D) I am not also worried to write feedback to the State Govt. Tourism Departments because now I know their links and I find them all here http://tourism.gov.in/RelatedLink/StateGovernmentLink.aspx

E) Last but not the least, today we are empowered with the Right To Information Act and we can assert our right to know the action taken on our feedback under that Act from the respective offices of Govt of India or the State Govt.

Best wishes to you all…..
With warm regards,

Ghumakkar Insight –Let’s wander! But be vigilant too was last modified: December 8th, 2021 by Anupam Chakraborty

Jaipur is the hub of tourist spots and adventure activities in western India. It is the centre of all the major attractions that come…