Places covered: Temi Tea Gardens, Samdruptse Hills, Char Dham, Buddha Park, helipad in Pelling, Rimbi Waterfall, Khecheopalri Lake and Kanchenjunga Waterfall
Time of Travel: December 2014
After spending 3 good days in Gangtok, we began our journey to Pelling early in the morning. Since we planned our trip via Namchi, its little tight schedule for the day (as per our driver), we needed to cover places in short time. Another reason, in northern-east part of the county, the sun sets comparatively early (30-40 minutes difference), so it gets dark in the evening before 6, and driving in mountains in night is not that good idea for a family with small kid. Though we tried our best, but the places were too good to cover in short span and thanks to wrong GPS tagging of our hotel, we ended up reaching very late.
While going to Namchi from Gangtok, you will have breathtaking view of Temi tea gardens. It was large green lush area both sides of the road, covered with tea plantation where you can see the summit of snow-clad mountains of Kanchenjunga range at the end. I have seen tea garden before in Kerala, but the combination of manicured green lawn with snow peaks in the backdrop was just mesmerizing. We took a tea break here, in small tea point in the middle of the garden. The taste of the tea was so different and fresh, than what we have it in cities; maybe it was the tea or the ambiance, you yourself need to go and explore…but it’s a must visit place for any Pelling visitor.

After getting rejuvenated at Temi, we started our journey to Samdruptse Hills. There is gigantic (about 135 feet tall) statue of Guru Padmasambhava also known as Guru Rinpoche (the patron saint of Sikkim who is believed to have blessed the land of Sikkim) located at the top of the hill. After parking the car and buying tickets, it’s an easy walk of about 0.5 km. The whole route is covered with holy Buddhist flags on one side and mountain rocks on the other, the view of Kanchenjunga mountain range is here again to keep you glued. 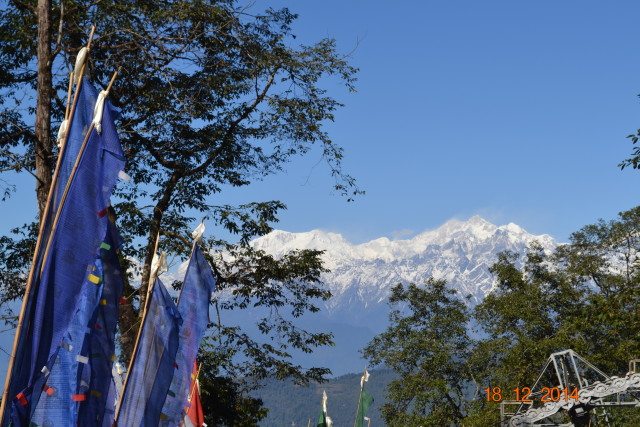 After reaching to the main site, you need to climb up stairs inside the main structure after removing shoes. The statue of the guru is located on the top of the hill, where the view from the balcony was so alluring that you would  like to stand here for long to seize the movement. Sincerely, we could not found a place, from where we can capture the magnitude of the statute and beauty around in camera in a single shot, so we just clicked the statute only. 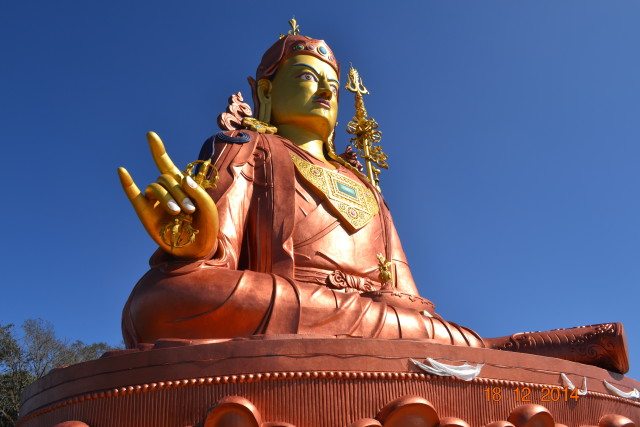 Next, we were going to cover was famous Char Dham. Firstly we were really surprised to see such a large plain area in the middle of a hilly place like Namchi, where the replica structures of all twelve jyothirlingas surrounding the statue of Lord Shiva and the Char Dhams can be built marvelously. My daughter was so happy to see a big area to run around after a long day spent in the car. When you enter any of the temples there, it gives you a feeling that you are there at that actual site minus the hustle-bustle of those busy and crowed holy cities. The credit must go the person who built this, and his eye for the detail, which makes this Char Dham of Namchi so special, as compared to many other replicas available in our country. Since there was so much to be clicked there and all the pictures can’t be posted here, I am just posting only two pictures, and leaving rest for imagination… 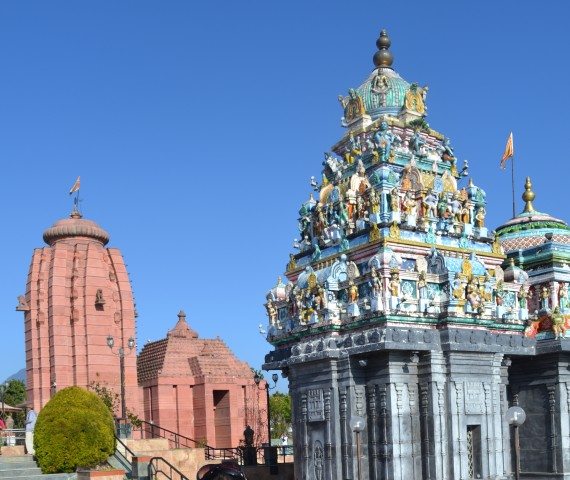 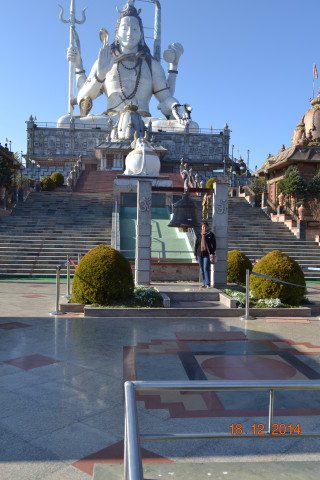 Next and last for that day on our list was Buddha Park of Ravangla. Its 130-feet high statue of the Buddha as a centerpiece amidst of beautifully maintained open area consists of greenery, sitting places, amphitheater/meditation centre and staircases. The sound ‘buddham sharnam gacchami’ (played inside amphitheater) can be heard everywhere in the huge park and felt like we are in complete tranquility. The aura of this place was so magical, I could not move for few minutes after entering the park. The park offers a panoramic view of snow capped mountains. Inside the statue, it was complete serene, and the whole history of Buddhism was been illustrated on the walls through huge oil paintings. After visited this park we realized, we should have come here little early, so that one can spend good time here. Since we were already late by then, so left halfheartedly with a secret wish to come again with enough time in hand.

Pelling is a small place, which offers an exceptional view of snow-covered Kanchenjunga mountain range from almost everywhere, from your hotel room to the small street you are walking on. After having breakfast, we started our journey from pelling to Darjeeling, as our night halt for that day was in Darjeeling, but we were to cover good places in between. So here we began with a helipad nearby our hotel. It was just 10-15 minutes drive from our hotel in lower pelling and is a nice open plain area, which offers terrific view of the mountain range. 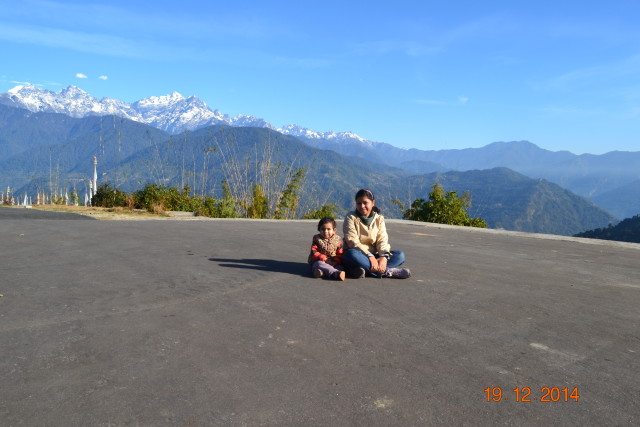 Now we moved towards Rimbi Waterfall. It’s a small stream of water falling from a good height and very well intact in its original natural form, unlike our very own well constructed Campty Fall in Mussoorie. Few natural places have been so commercialized that there is hardly any natural charm remaining in them, Campty Fall is one of such example. We North Indians should learn this from people of North-East. It was a bright sunny day and we were just fine with single jacket, but when we went near to water, droplet can be felt on our faces and suddenly it started feeling so chilly. The tea point near to fall was a boon, we had refreshing cuppa with amazing view of the waterfall in front of us and started our journey ahead. 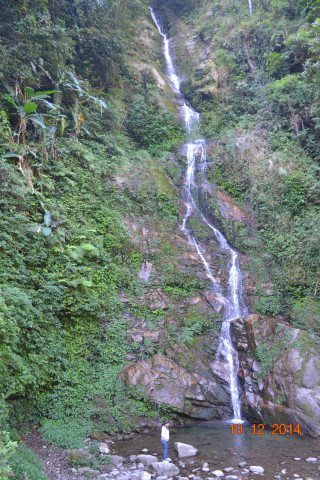 Khecheopalri Lake, our next target was not very far of Rimbi waterfall. It’s a small auspicious lake with not so clear water, and lots of fishes. Only one side of the lake is open for visitors, there was dense forest on the other side. It is a sacred Lake for both Buddhists and Hindus, which is believed to be a wish fulfilling lake, and people come here for darshan/pooja, after big events like wedding or child birth. We have seen many locals there doing rituals. The route to lake from parking place was also very pretty with small ‘pagdandi’ where you can see tiny holy structures/towers of pebble on the way, erected by people while making wishes or may be after fulfilling it. 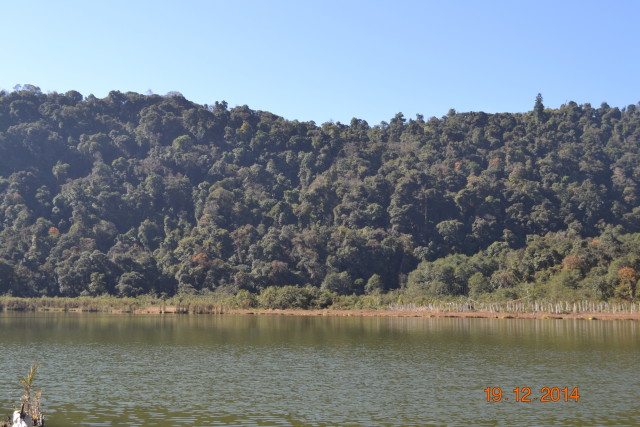 The grand final for that day was Kanchenjunga Falls, which was our last halt, before non-stop ride till Darjeeling. It was the biggest waterfall I have seen in the whole trip, with its lush green surroundings, the high falling water flow and such great sound of water, it’s a must visit place. There was a small pathway leading to the waterfalls location from the main road. The path was bit slippery due continuous raining of droplets from waterfall, hence one need to be careful while walking. The place where the falling water accumulates below the water fall is little away from the pathway and we hopped on stones to reach that spot. Overall, I found the place very beautiful with the roaring noise of the high flowing water.