A business trip for two days to the city of ‘Tehzeeb’, as Aditya said in his post on Lucknow, had to have some room for non-business activity, even though the activity is in/around an old and charming business center. I was there to pick some brights lads for my company from IET. It was to be a 2 day affair so we decided to stretch long on Day1 (interview till everyone is dead and you wonder that whether the ones you are still interviewing are real people or ghosts) so that we have some time for ourselves to while around. Everyone else was a first timer so I chose the place (selfish), of my personal preference (more selfish) and it was to be the old Lucknow, specifically Aminabad. The plan was to have lunch at “Tunday’s Kebab” and then get closer to narrow alleys, road side vendors, local nuances of Lucknawi Hindi and to soak that special ether which you can find in these places.

First a little bit of history. Lucknow is on the banks of river Gomti and is capital of ‘Uttar Pradesh’, the state which probably have produced most number of ‘Prime Mininsters’. Ruled and developed by Nawabs of Oudh (Awadh), most of today’s city could be attributed to the efforts of one man called Asaf-ud-Daula. The same person was also instrumental in developing Aminabad as a place for all business. Today you can find almost everything in Aminabad, ranging from chikan-dresses to electronics, foot wear, food, house hold articles, sweets etc etc. So a quick dose of history to help you imagine the past, let me take you to the tour which we did.

As we got out of parking lot, I realize that I didn’t tell you that you are better off parking your car outside the market, you look around and taste some of the old buildings. These are functional, even though one would expect them to be ruins. Its so much a different feeling to look at an old structure and see ‘Dish TV’ dishes gutting out. As we proceeded, we discovered more such things where the past has got amalgamated (I just had to use this word somehow) to present without any fear of being non-relevant or out-of-date. Read it again if it doesn’t make much sense. Read further for sure. 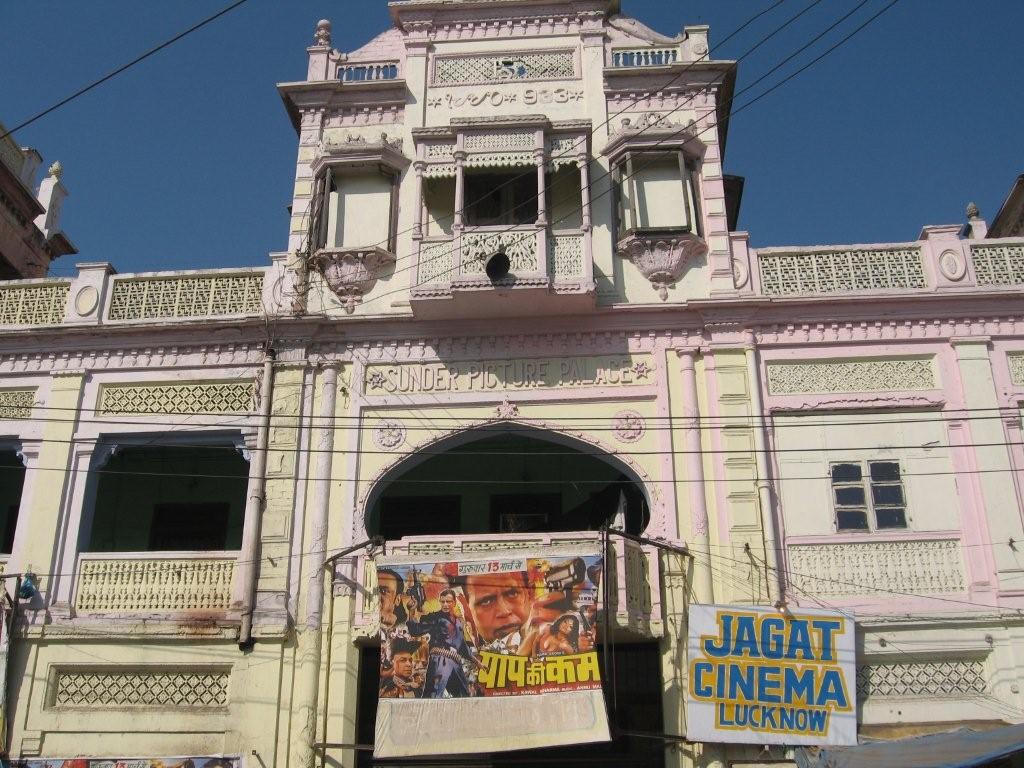 The first thing was this old cinema hall called ‘Jagat Cinema’ and they were playing ‘Paap Ki Kamai’. Its one of those raunchy Mithun movies with lots of action. Its surprising to see that da still sells very well and I must have seen Ms. Bijalni Azharuddin after a long time. Back. Back. On looking hard, it seemed that this building has more things then just the cinema hall. The facade is mughal-ian and the inscription says ‘Sundar Picture Palace’, I also read somewhere that there is this “maulana jauhar ali hall” inside this building. So after admiring the structure and getting bowled over by the fact of its being used actively I asked our driver/guide for the age and he laughed (rather smirked) off my query. We moved ahead.

Then comes this series of book shops, pretty close to what someone sees in Nai Sadak (Delhi), though at a much lower scale and as you cross these, you get into the heart of Aminabad. With every few steps, the variety of hawkers increase manifold and so are the number of people. As you maneuver your way around, you reach a ‘chauraha’ (where four roads meet) or rather ‘chhe-raha’ (make it six) where each of the road-let has an own world. We wanted to be done with ‘Tunday’ so we took a hard left and after a while we were standing right in front of the great Tunday Kebab place. 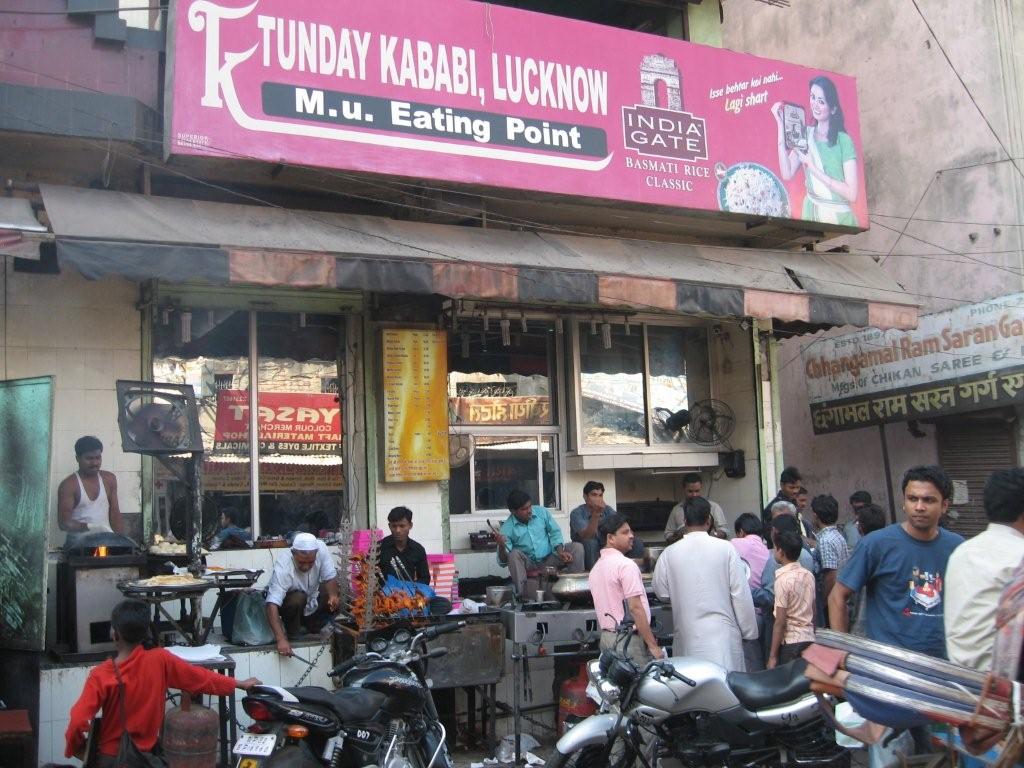 The kebabs are juicy and soft. Biryani is delicious, Mutton Keema was just right and once you look up the walls you would see those framed pics of Yousuf Bhai (aka Dilip, of Madhumati and Naya Daur fame), Rajiv Gandhi, Salman and even Anil Kapoor, proudly standing along with the owner. Incidentally the rates are very reasonable and the total bill was less then Rs 250 for four of us which included soft drinks and more food then we could consume.

After having a hearty meal, the ladies decided to do shopping and me and Srijesh chose to take long walks. While Srijesh shared his experience of traveling in ‘Samjhauta Express’ (the one that supposedly goes to Lahore from saadi Delhi), we cherished those narrow bylanes, those shops which probably are there since Daula’s time, loads of people on all kinds of vehicles and that sheer mass of variety. If some one has to find unique (Select Unique rows kind of SQL command) items, I am sure one’s lifetime would be short enough to sort the results. We were a week away from Holi (festival of colors) but we didn’t encounter anything unwarranted. 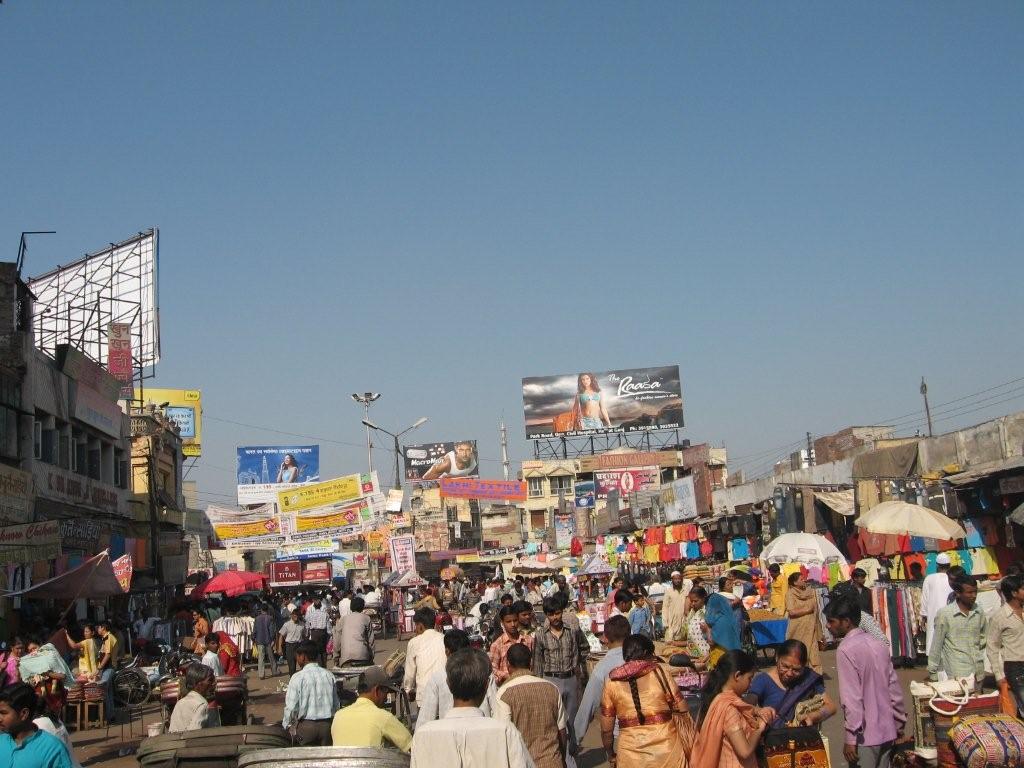 As we were doing rounds of our walks, we came across things which made us feel a part of an era which somehow appeared as gone. One interesting sweet shop which we hit upon was named ‘Puraane Kabra ke paas waali dukaan’ (shop near the old grave) and it was a sweet shop, if I remember correctly. It was getting hot and humid and we tried to find a joint to get a pint but could not find it easily so gave up. Probably we were not inclined enough and were rather happy getting lost in that noisy, humid chaos. 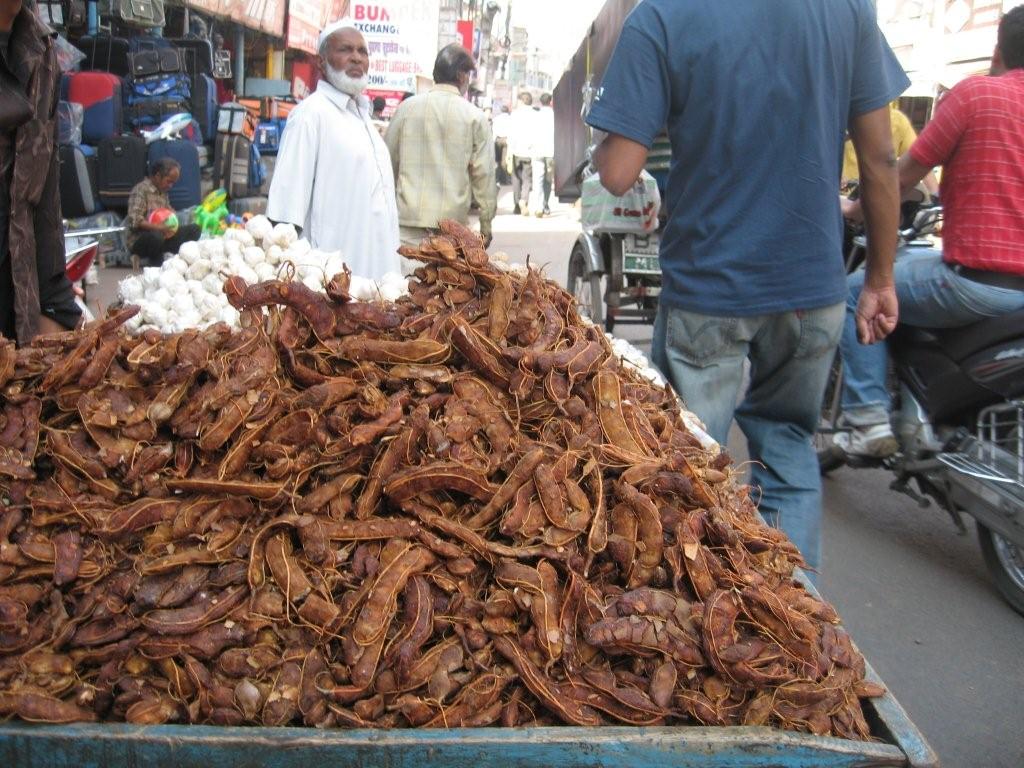 And as we were closing down on our sojourn, we found this chap who was selling ‘batteries’ which can charge your cell phone or play your radio. Interesting the source of power for these batteries was solar. So here’s a video. Dont pay too much attention to these chinese toys but rather notice his tone and accent.

We left for Airport to catch our evening IC flight, dozing off in car. A hot summer afternoon well spent.

By the lanes of Aminabad – Lucknow was last modified: July 3rd, 2019 by Nandan Jha