Hey there. I don’t know where to start. India has opened my eyes to a whole new culture I have never before seen. I’ve been born and brought up in Auckland, New Zealand, and often visit my home city Pune. However, this time, my relatives and I decided to visit the heart of Madhya Pradesh to get a historically and culturally rich experience. After having an initial debate on which places to go to, we came to the official conclusion of touring Khajuraho, Orchha and Gwalior.

Now to the trip. First we landed in Khajuraho on a flight full of foreigners – we and one lady were the only Indians on board. As soon as we landed, I felt different. It was as if I landed in a completely different world. I was immersed in fresh and pleasant air, unlike other Indian cities I had been to, such as Mumbai and Pune. And the airport was just fantastic as it was full of historical relics and pieces of art. Coming out of the airport, I realized that we were in a rural and quiet location. No traffic. No rubbish. No usual day-to-day grind. We met our driver and departed to Ramada Hotel. Khajuraho is a small town (only around 2000 people) and everything is close. It was interesting watching stray cows, buffalos and dogs occupying the roads and wandering around – and even more interesting that all of them are looked after by the people. So many poor citizens live in Khajuraho, yet this is what unifies them all to live peacefully. Ramada was also a beautiful and luxurious hotel.

After a refreshing tea, we travelled to the Khajuraho eastern temples while daylight lasted. Some of the temples were intact and some of them were restored. They were stunning and gave us a glimpse of the utter intelligence of ancient Indian engineers. To my surprise, they were very few tourists. Coming out of the temple area was difficult considering the numerous shopkeepers begging us to buy their souvenirs and goods – we didn’t want anything but to support them we bought an antique. It’s extremely difficult to decline these market sellers. After returning to Ramada, we had dinner and collapsed on our beds to recover for the next day which was going to be full of adventures. 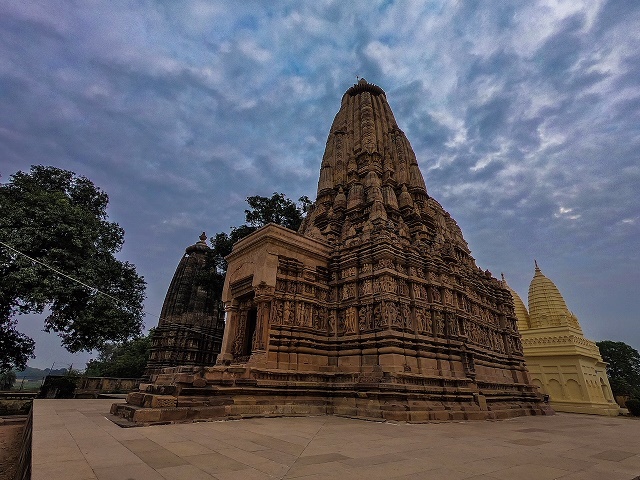 The next day, we woke early and went down for breakfast. We departed to Raneh Falls which is said to be the ‘Grand Canyon of India’. I must say that I enjoyed it more than the actual Grand Canyon (I had visited the Grand Canyon in US the previous year). Perhaps because of the sheer uniqueness of every view I got of the canyons and the Ken River. Our guide at Raneh Falls hopped into our car at the gate of the area and showed us various wild animals, natural forests, rock formations and viewpoints at Raneh Falls. There was no waterfall due to the lack of rain but our guide said that this allowed us to see the full canyon and rock formations. We took granite, quartz and Jasper that we found on the ground as souvenirs and headed off to Khajuraho western temples. The eastern temples are nothing compared to this. Towering hand carved stone structures which are 1000 years old and impossible to build today. Even the footpath there has eroded but the temples are intact. Millions of hand carved sculptors were embossed upon the temples that anyone could spend an entire day observing a single wall. The light and sound show that night explained the story of the temples and how they came to be. They stand in Khajuraho like kings in a beautiful and clean park. 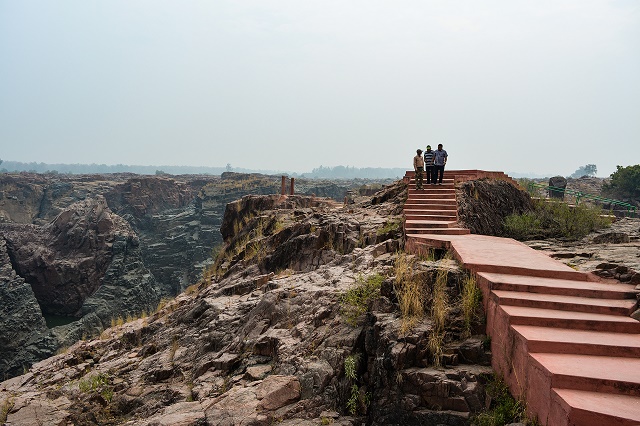 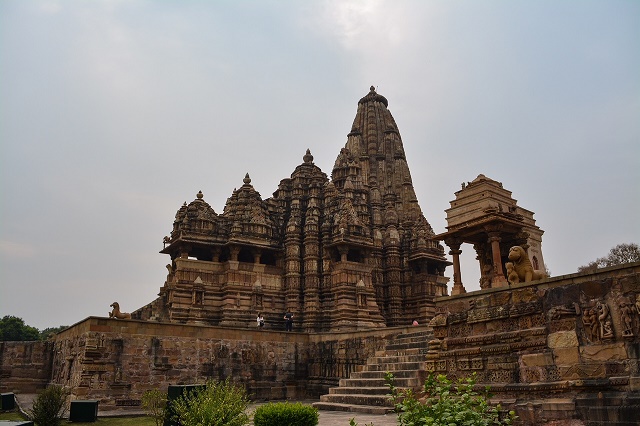 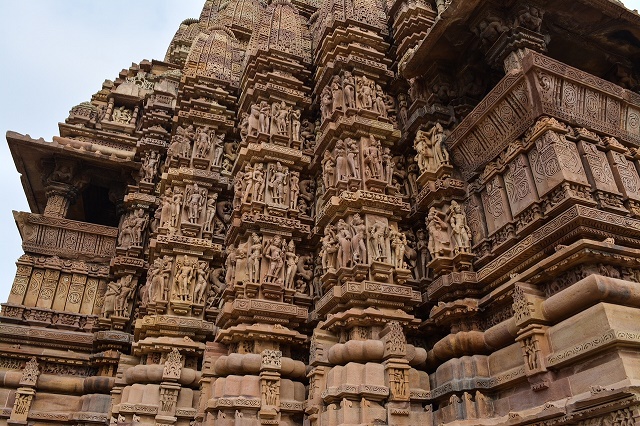 The next morning, we were off to Orchha – the hidden city. We started the journey with another driver. Upon reaching Orchha we realized that we cannot enter the city because cars are not allowed through the gates due to an utsav (public ceremony) going on. Therefore, our driver would look after our belongings and we would walk to Orchha resort. I realized that Orchha’s people are very nice – they smile at you and appear very friendly. There are as many cows, buffalos and dogs on the road as much as people – a sign on the road also read “please look after the children, cows and dogs”. Orchha is two roads big which are bustling with market style shops. Orchha fort overshadows the town from behind it’s 20km walls. Chaturbhuj temple, the tallest structure and an utterly massive temple, towers over the town from the opposite side of the fort. Beside the Chaturbhuj temple is a mahal which is converted into a mandir. Just outside the town lies large river called the “Betwa”. A thin bridge with no railing goes across the river and to my surprise, the bridge is used by large buses along with everyone else. We observed several children diving into the Betwa from the bridge. Orchha Resort was on the banks of the river and right outside the resort was the Chattris – cenotaphs of the old kings. 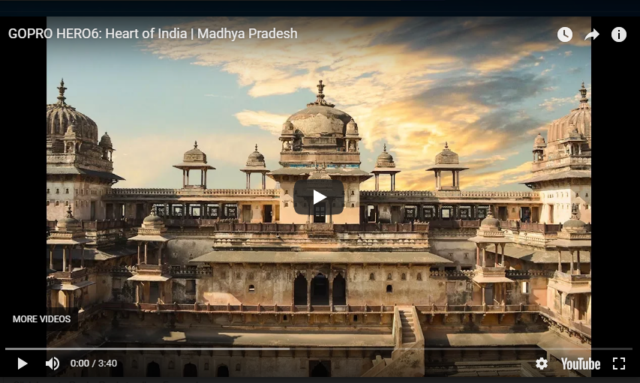 After going through the markets and settling down in the resort (the driver later brought our baggage), we checked out the Chattris and then went to Chaturbhuj temple. It is enormous, extremely tall and located on a very high place. Inside the temple, a man specially approached me and asked whether we want to go to the roof of the temple (it was dodgy when he only asked me). We agreed and followed him through a dark staircase that was locked behind a door. The view at the top was breath-taking. I don’t care how dangerous it was – we could see temples in the distance, the great Orchha mahals, forests, and everything! That was the highlight. An unplanned delight!

Chattris behind the Betwa River 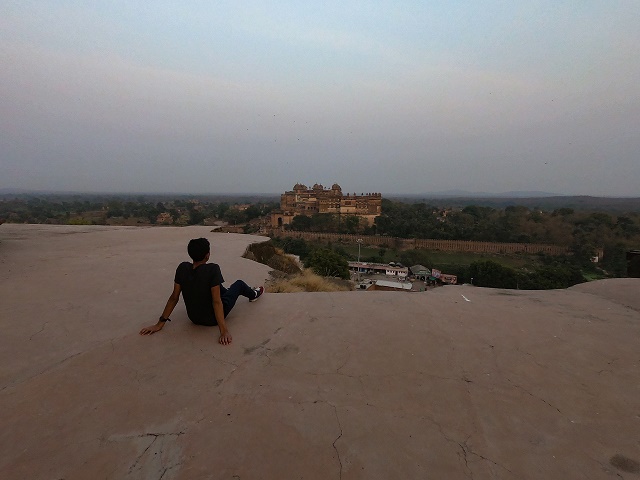 View of Orchha fort from the rooftop of Chaturbhuj mandir

The next day, with the aid of a guide, we completed Orchha fort, Laxmi temple and rest of the Chattris. Orchha fort must be my favourite fort – it has seen so much complicated history but yet looks untouched. A window in the fort gazes straight through the door of the Chaturbhuj mandir (which is significantly far away) and to the God’s murti (idol). This is so that the king and queen can get the darshan (blessing) of God without going to the Chaturbuj mandir itself. Laxmi temple is also very far away from Orchha fort, yet it is built in such a way that it stares straight at the fort so that Laxmi can bless the fort with wealth. We went to Ram Raja mandir which used to be a mahal – this is the only Ram temple in India where Ram is worshiped as a king and not a god. We then wondered through the markets and bought Orchha tea, an Indian painting and incense. The citizens of Orchha are so nice to talk to and are curious about tourists. The light and sound show at night explained the convoluted and confusing history of Orchha fort which is extremely interesting but difficult to remember. 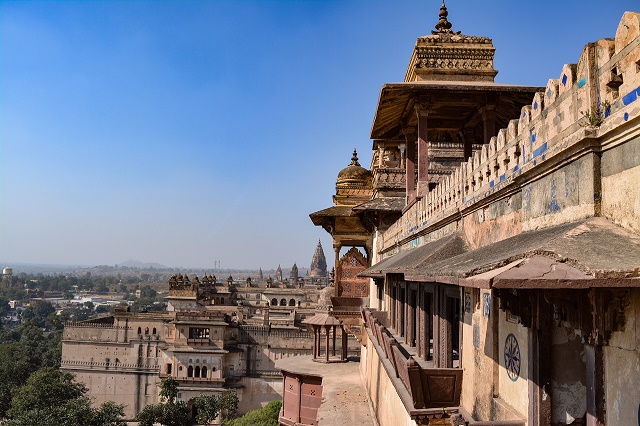 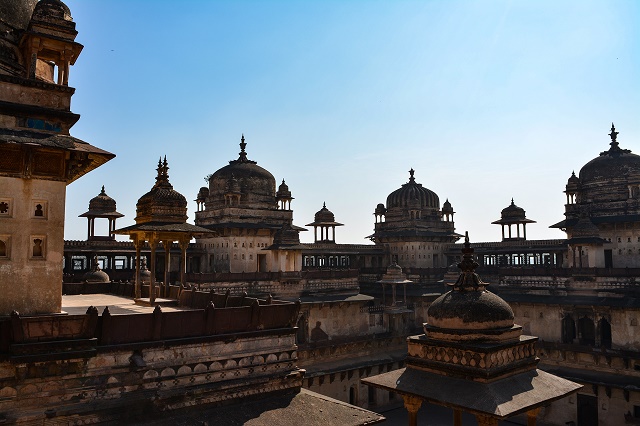 I had to say bye-bye to Orchha which I loved so much and we headed off to Gwalior in the morning. We signed into Tansen Residency and went to see Jai Vilas Mahal. It was a beautiful palace converted into a museum built by the British and entirely British style. I must say the museum wasn’t that amusing. Then we headed to Gwalior fort. The internet had told me that this was the biggest and best fort in India. To be honest, it wasn’t. A mahal within the fort was very beautiful but it was overcrowded and difficult to cherish the place. The other parts of the fort were not looked after by the government – the interior smelled so bad because of bats, and there was overgrown vegetation and rubbish everywhere. 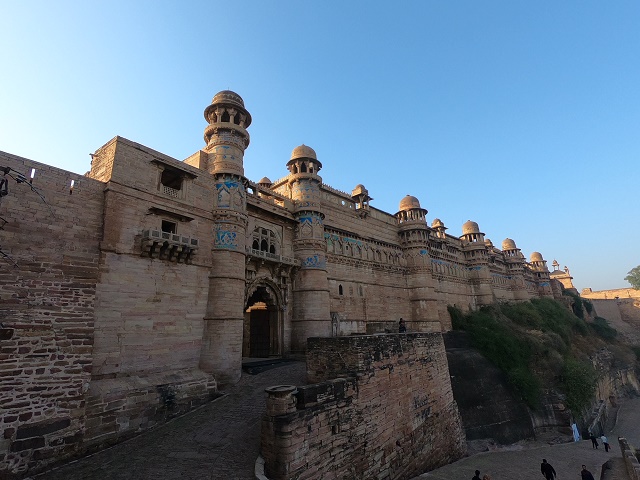 Overall, it was an amazing experience for me. I was able to immerse myself in Indian culture, away from the modernized cities. I would have enjoyed Gwalior if I had seen it first, because Khajuraho and Orchha are unmatchable for me. From the beautiful people, the rich history, the magnificent monuments, the roads and the atmosphere, I truly enjoyed the heart of Maydha Pradesh and I can definitely see myself returning there in the future.

Experiencing the Heart of India was last modified: June 7th, 2018 by Ishaan