Next morning (Saturday, Day 02), After heavy breakfast of paranthas et al and buying drinking water bottles, chocolates, medicines etc… we started trekking by 08:00 am… surprisingly, the trek was not very steep. All of us were mesmerized and stunned by the sight of virgin forests, snow clad peaks and excitement to see snowfall and snow all around us at summit, “GAUMUKH”. Slowly our excitement waned as we were not accustomed to walk much leave alone trekking at such an altitude… the trek was very dangerous at places and was very narrow…with Bhagirathi flowing at it’s full glory beneath…

We came across many small pass and nallas on the way… there were wooden logs to cross them… we played with water at one of the nallas… mind you the water was freezing cold.. Difficult to dip our legs or hand…. We tasted the water and it was sweet but very hard… as we were not carrying food with us we got hungry and had to do with few chocos and candies only…

Reached our first stopover at chirbasa… a small man made forest of pine trees… we could see some old dhabas and tea stalls… since 2009… The entire gaumukh trek from gangotri is shacks free… mind you. If you don’t carry anything with you will have to make do with only hard water at flowing nallas on the way… We rested at chirbasa for some 30 minutes and could feel the calf muscles stiffing and body giving up… so we started up again towards the summit….. We soon got tired for want of food… Gaurav was walking at a good speed … Anuj the second best… I and Rakesh were kind of very slow…

Slowly the day began to fad to give way to the darkness and weather too began to act like a nasty villain with freezing cold breezes … drizzle and eventually it started snowing… I realized my jacket was soaking water and would soon wet me… so had to speed up somewhat….soon all of us were out of sight of each other… as we all were trekking at different speed and were focussed to reach bhojwasa… the base camp 5 km before gaumukh.. on way we came across 2 old man in 60’s and 70’s … 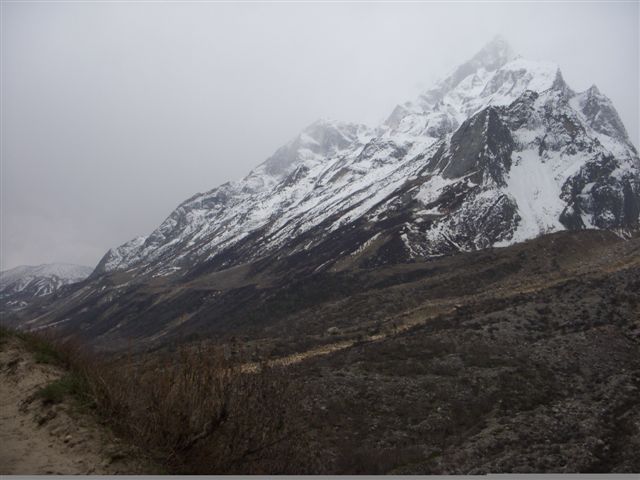 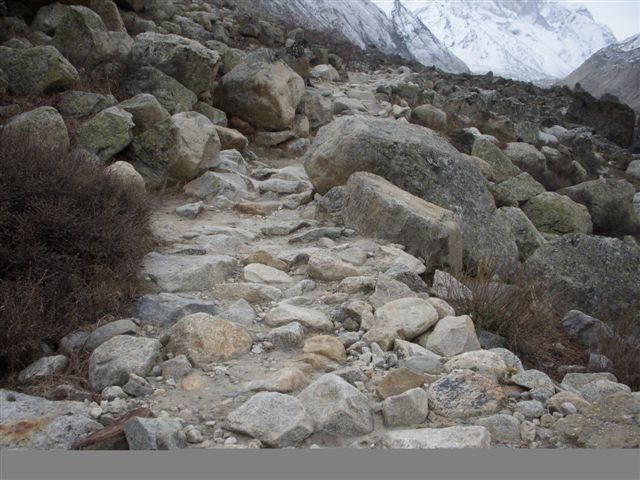 we started talking while resting at one place and were besieged to learn that the 2 guys were trekking every year since last 17 years… they patted our back and gave us much needed motivation to pep up energy and start trekking… to utter dismay.. I was trekking slower than the 2 old man. Now, I remember the ad of dabur chyawanprash… 60 saal ke jawan… we were trekking as if there was no end and no sight of even the base camp… leave alone the summit.. I reached one point when there was kind of end of trek … no one at sight ahead or behind… dark…snowing and wild sounds…… I was applying all of my brain to figure out the way ahead… activated my sixth sense and tried to reach the top of the boulders to see the trek ahead .. only to find that I was right and could see the ray of hope in the form of base camp at bhojbasa…Only thing I could think was to reach the camp and look for other mates… the wrist watch clocked 5:30 PM 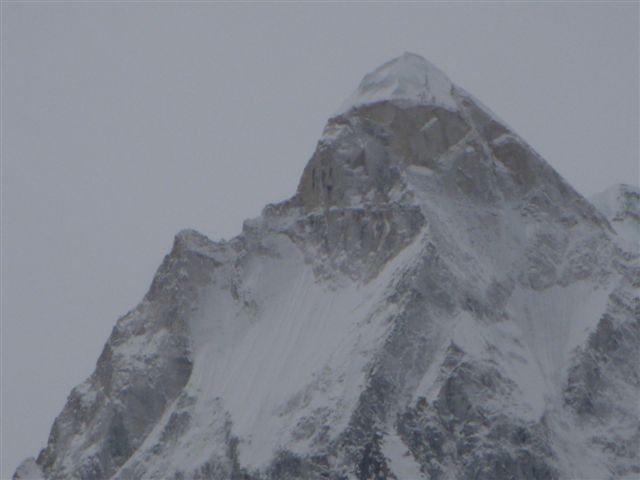 Laal baba ashram was the first glimpse of the camp from the hillock and GMVN camp and Army base camp was also visible. As I walked in ashram, the old men were already there and ordering hot cuppa (I was surprised to see them as I was though they were way behind)… n… there I saw Anuj appearing from no where and saw gaurav running in from the GMVN camp nearby while it was snowing… we negotiated to book dormitory room … just when rakesh also popped in, covered with snow, feeling cold and tired…. It was not possible to trek towards summit.. So we decided to stopover for night halt and start onwards journey, the next day. 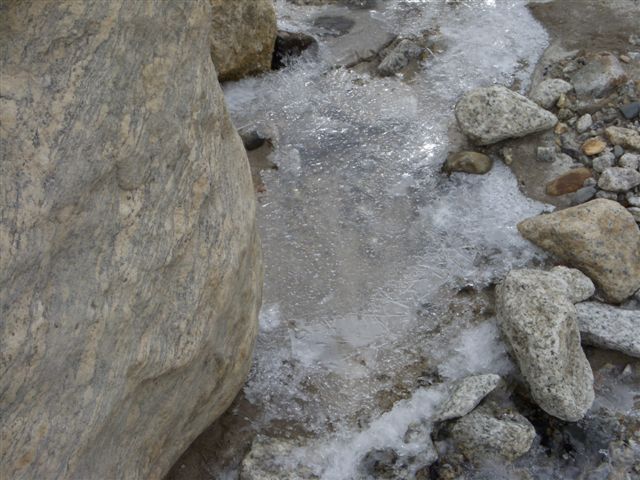 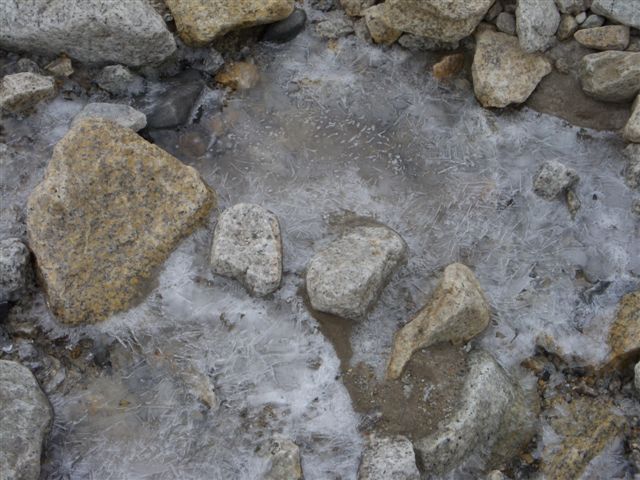 I was not pleased by the dirty linen and quilts at ashram and thought to look at GMVN camp… GMVN charged 400 per bed for the 8 bedded tents at the camp area… all rooms were booked so had no option but to book tents. These tents were the only savior for us now.

Ordered maggi@`50 and hot cuppa… I must tell you.. Maggi  never tasted so good .. Had 2 maggi.. And hot cuppa. And, still feeling hungry… the entire body aching with pain and cold… as if  someone put us in deep freezer… the temperature was below zero degrees (someone said, -5 to -10 degrees). Rested in the camp after dinner by  8:00PM… just then Anuj got one gorkha to massage our aching legs and back… much needed and we also got iodex to relax the stiff muscles… after sometime we slept.. Only to wake up next day (day  3) at 6AM. We wanted to catch some more sleep but had no choice.. Else, we might have to stay one more night in the camp… which we didn’t want. 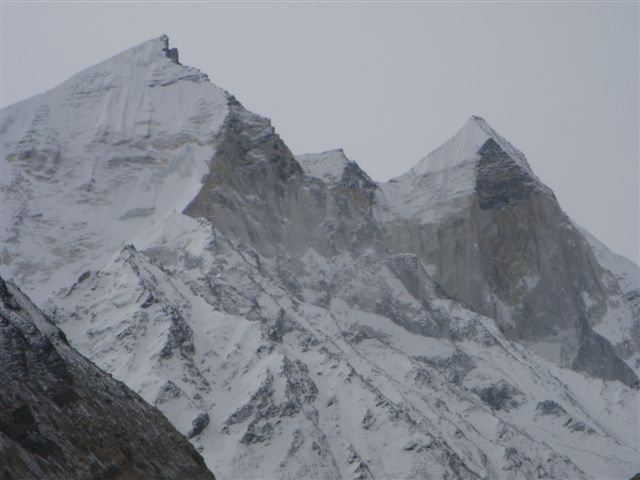 I was amazed to see the frozen water dripping from the water jug from table to the floor. (I missed to take the snap). Got fresh and had breakfast to start onward journey. Rakesh got cold, so decided to stay at camp while 3 of us started enthusiastically…All our enthusiasm started waning during trek under adverse conditions (steep trek and lack of oxygen).. We started filling dizzy but keep walking… reached summit in around 3 hours.

The view to the holy cave from the hill was amazing and many milestone in between keep reminding of the effect of global warming as glacier had shrunken beyond holy cave now.

As we were walking towards the holy cave (GAUMUKH), the oxygen supply was dwindling and I was the first one to give in and stopped just 50 meters from the holy cave. Other 2 went near the holy cave and spent some 20-30 minutes… just in that time, there face skin got black wrinkles like boiled potato skin (lack of oxygen ‘n direct contact of glacial temp). they took few pics, play with snow  ball and came back to me…again took more pics and rushed back… Anuj was eatremely fatigued while treking back.

Rakesh was vomitting badly and had severe head ache due to bad weather and low temperature. At one point we thought of staying back but that would adversely affect our health. So, we decided to head back, albeit at different pace. Decided to wait for each other at regular interval. Treking back was little comfortable. One, we were familiar, by now, with the terrain and treks. Second, treking downhil is comparatively less difficult. 3 of us already trekked 4 KM from bhijbasa to agumukh and back and the 4th one unwell. Slowly and steadily we descended back to gangotri base camp. It was already 8:30 PM., extremely tired. Rented room, dumped the bags and other belongings from the car and shoulders in the room, make calls at home and took rest. Guess what, we were badly hungry, remember we skipped lunch while descending back. With heavy heart we went to the market for dinner. 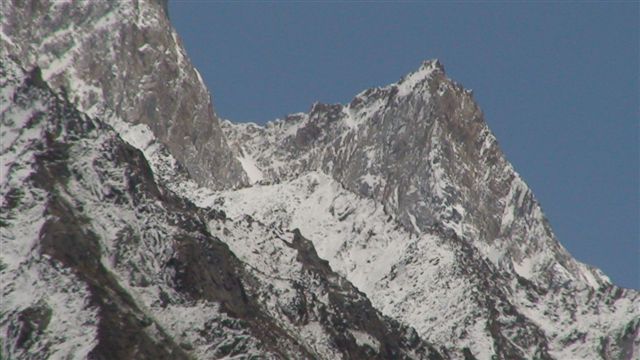 Next Day, DAY 4,  we went for gangotri mata darshan and started back towards Delhi. I was in a hurry as my wife was coming from US and had to pick her form airport. Unfortunately, weather gods were not very kind to me and we could reach only early morning. My wife called his brother for the transfer.

All in all, it was very satisfying, electrifying trip although, we were either driving or trekking for 5 days in all. This year, too I wanted to to go there, but could not got companion. Anyways, lets see, if I am able to make again next year or so.