For a very long time, we wanted to go to Abbott Mount in Uttrakhand. A close friend, who runs a camp at sat-tal called Getaway Jungle Camp, has been dropping this name for almost last 7 years. He was looking at Abbott as a possible venue for his next camping site. His description of the place has led to a mental picture and over time it got developed as we got some more information about it. Almost as if you are making a new place, first there were mountains, then a cottage, then a steep path leading to it which can only be traversed in a 4 X 4 and so on. Among other things which got imprinted in my mind was the long distance and the place seemed very far and hence needed right kind of drive planning in terms of stops and breaks. All of this was enough to decide Abbott Mount as the place to halt for a night, on our long trip to Munsyari. Yes, I forgot to tell you that though we always wanted to go to Mount Abbott and that it is very far, we decided to go a little further, all the way to Munsyari. We planned to take a breakfast break post Rampur Fatak (some people also call it a railway crossing) and were looking at crossing the fatak as soon (how can you cross a crossing, almost feels like being a double cross) as we can after all we had a long way to go. Second break was to be at Tanakpur, the Indo-Nepal border town with some time left to do sundry shopping. I was already beginning to imagine a city full of cargo jeans shops and bright Shiva Tee(s). Post Tanakpur, we would break for a long tea session at Champawat, a place which is on the tourist map of Uttrakhand and the name sounded very fascinating and finally we would take that steep and be at the cottages before it gets dark.

The bigger plan of Munsyari was discussed, deliberated and dissected multiple times. We also spoke to our Pahar experts and were rudely reminded by a close and knowledgeable friend that it would be a pain to stop at Tanakpur so keep driving. So we knocked it off. Then came Champawat’s turn which though a great tea-stop, but so would be Abbott Mount and in the end, the plan was to simply start early morning, try to make good progress and be there at Abbott by afternoon.

We were to be joined by a friend from Mumbai the previous night and on the morning of …. June the group of 6, two pairs of young parents, started on the journey to the Him-Nagar of Uttrakhand, Munsyari at about 6 AM in the morning.

Though I am very tempted to write a lot about road, I would hold my horses at least for the first stretch. This is the route we were to take and we did take this route only.

View Directions to Abbott Mount in a larger map

We had planned to not make a stop before we cross the crossing and we did that. The crossing got over in a breeze. This was a rarity and a good enough achievement to stop for our breakfast break. It was to be at ‘New Mehfil Restaurant’. Pretty good food, fresh and tasty Aaloo paranthas but overall hygiene needed much work. Not recommended since there are many good joints on the way. We were doing good in terms of time and by 1030 we moved on from Rampur towards Rudrapur. The rest of the drive till Rudrapur was very routine for me and my wife though my friend from Mumbai was very excited and would look at this GPS-eqipped phone every few KMs to ensure that we are on right track. This would have been my 50th drive on this route, if not 100th. From Rudrapur, we had to take a right turn towards Tanakpur.

We passed through Sitarganj, with lush green paddy fields in full action in a slightly overcast weather and moved on before my GPS-enabled friend noticed a big water body, on his phone that is. This was not in plan but looking at the size, we got curious and realized that we are moving towards that water-body only. After a while, it was right next to us, a real huge lake. At the bridge, we came to know that it is ‘Nanak Sar’. Since we had a long way to go, we moved on after clicking a few pictures and failed attempts to upload them at Facebook. 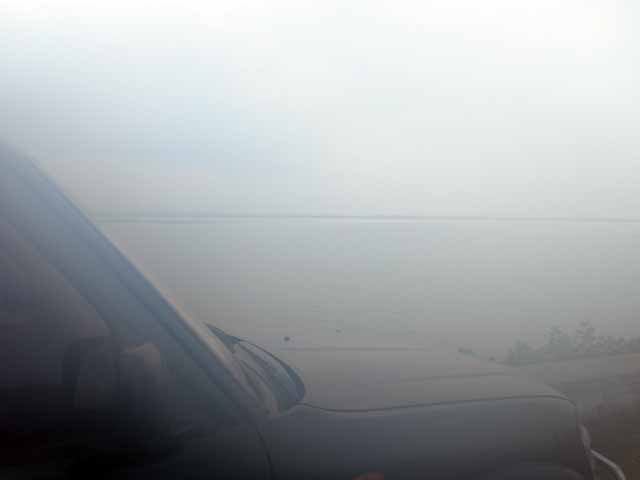 We crossed Tanakpur before 1200 hrs and we were beginning to climb.

Tanakpur lived to its expectation of a bustling town which we tried to get past fast. We were very close to Indo-Nepal border and ‘Mahendra Nagar’, the big town on Nepal side, was only 12 KMs away. At one place, we even saw a board marking some temple in Nepal at a detour of 3 Kilometers. We were very tempted but the training of all the past years of Abbott being so far didn’t give us enough courage to fall for it and we kept on our way. 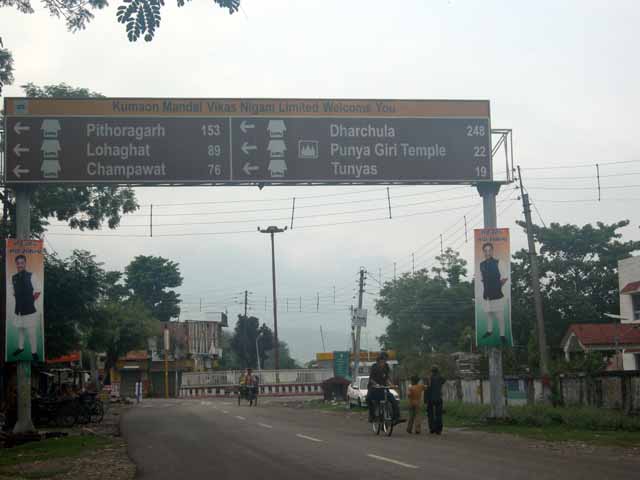 All roads lead to left towards Himalayas. At Tanakpur 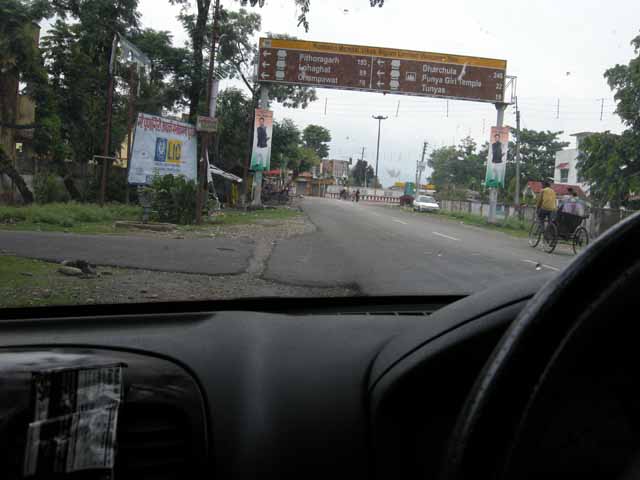 At Tanakpur. One from the car.

From Tanakpur, we were about 90 KMs away and we got very hopeful of hitting Abbot Mount for a late lunch but we thought too soon. The road from Tanakpur to Abbott via Dayuri , Chalthi, Champawat is a complete hill road with its own quota of turns and curves. At many place, because of landslides our progress was greatly reduced. The drive was spectacular with mist keeping company like a faithful escort and the tar quality demonstrating the fab job BRO do. 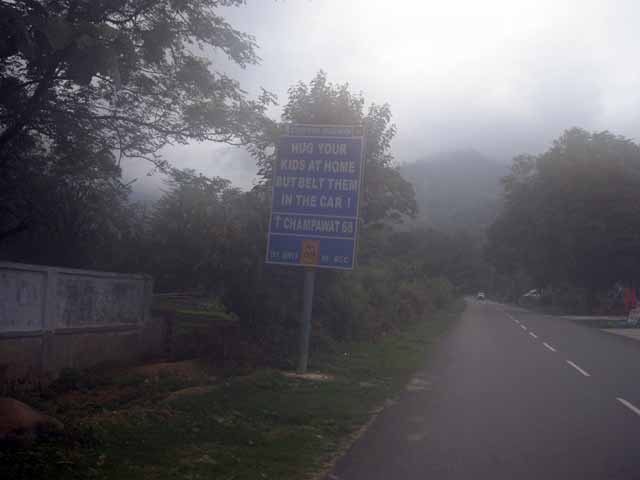 At many places, we could see debris, a result of a fresh landslide and the non-tiring workers trying to clear the route. The progress was steady but very slow and and we could reach Champawat only by 3 PM and were ready to have a hearty meal.

Since we are going to take a food break here, let me take some time and tell you a little bit about Champawat.

Champawat is your gateway to upper Kumaon (Lohaghat, Pithoragarh, Munsyari, Dharchula) and is a district. It is separated from Nepal by Kali river and that acts as an International Broder. Champwat district is pretty big and hence techincally it has mountains as well as the Tarai region. Main town is a cold area and in summers it is very pleasant but in winters it gets very cold. We stopped in the main market for food and it seemed like a good enough market where you can get almost everything which you need often. It is at/about 1600 meter which is not much but if you go a little further, you can gain height very quickly.

So we had good food. 2 Plates of Veg and 2 plates of non-veg thali and the customary photos. It was almost close to 4 when we were done and headed back to our car. We were very happy for the progress we had made and though it was getting close to evening, we were only 30 minute away from our destination if it was not for the flat tyre of the bulky car.

We got down to fixing it and called up our man to update him on our newly-found-occupation and were advised to instead look for a puncture-shop, for tyre replacement as well. So we did that and after about 45 minutes of character-building, we were back on the road. It was drizzling all through and we utilized our time by reading most recent road updates in the local newspaper and chatting with local folk.

It was not long when we were at the base of steep. Right after Lohaghat, you need to take a detour and I must say that it was a worthy steep for all the hard work we were into since morning. I was only praying that I do not get any oncoming vehicle since at many places it would have meant a lot of more character-building. There were occassional houses alongside road and a thick vegetation. The rains were still with us and one could feel a little nip. Since all of us were pretty well fed, the mood was good in the cabin and the steep led us to a large green clearing.

We now were without road and climbed (that is rode) a pathway which led to four large-hearted Deodars waiting in a quartet, tall and elegant. We crossed the natural portico and stopped since we were now at the edge of that little rock. Right there, at a fall of about 10 meters was our cottage. 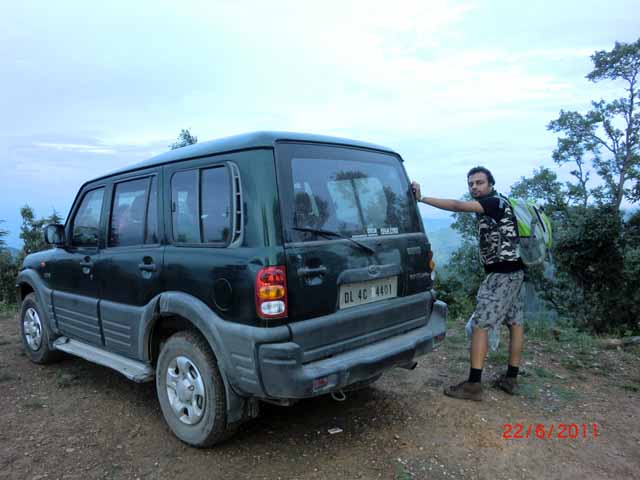 It was almost 5 PM when we settled down and were having the great Himalayan sweet tea. Feeling a bit cold, we were wondering what is in store for us for next 7 days. 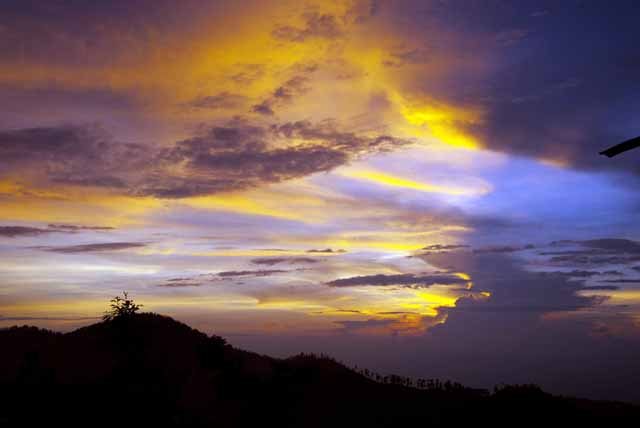 Bonus photo for those who read all the way till here, fabulous Sunset.

Our bus was stopped by one police party at Srinagar and asks to go back as there was some stone pelting incidence on the road. Later we came to know that some fire was broken out at some old Sufi Dargah due to which local persons were creating disturbances in the area. All buses returned 15 Km and took the Gulmarg Bypass road. All this exercise wasted one hour. I was sure that we will not reach Baltal in the evening because we were too late to cross Manigam Camp .Generally all the Yatra vehicles moving towards Baltal are stopped at Manigam Yatra camp after 5 PM. Manigam lies in Ganderbal district and 35 Km away from Srinagar. As feared our buses were stopped at Manigam camp. A lot of vehicles were already parked there. Our bus driver told us that the buses will leave for Baltal next morning at 6.30 AM. There were lots of tents available for night rest. 3-4 Bhandaras were also there for food and snacks. We took our bags and book one tent @100 per head. Then after taking dinner at Bandara we came to our tent for sleep.