As soon as I finished my board exams of class tenth, I planned to visit alongwith my parents the renowned streets of Chandni chowk. We parked our car at Rajouri Garden metro station and boarded the metro to Chandni Chowk, the oldest market place (bazar) in Old Delhi.

Chandni Chowk has a rich historical background and it is believed that it was built in the seventeenth century by the great Mughal Emperor Shahajahan. Chandni Chowk meaning the Moonlight Square, was designed and laid by Jahanara Begum, Mughal emperor Shahajahan’s daughter between the Red Fort and Fateh Puri Masjid. There used to be a Najafgarh pond, the water of which glittered while reflecting the moonlight and then flowed into a cannal, known as Faiz Nahar across this locale. There were expansive gardens to the north of this avenue that also canopied Jahanara sarai, the palace of the Begum, which today houses the biggest electrical market of north India. 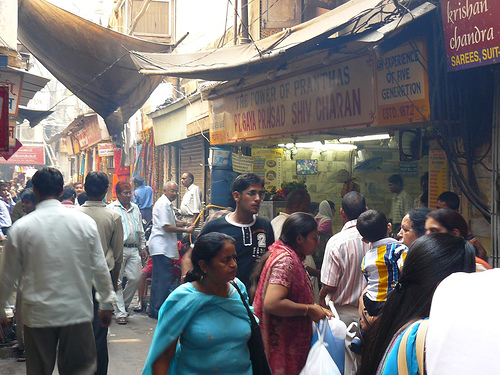 History has it that the emperor thought about founding this market in Old Delhi to satiate his daughter’s shopping needs. It became a trading centre during Shahjahan’s time itself. An arcade of shops had been built in a half-moon shape. Round this nucleus, in no time, grew a fabulous and prosperous trading center which spread along the wide road and branched into a number of bylanes in all directions. Originally only this stretch was known as Chandni Chowk. But as the trading center grew in magnificence and prosperity, the whole area from the Fort to Fatehpuri grew famous as Chandni Chowk. The best thing is that even after three and a half centuries later this area is still called by the same name . 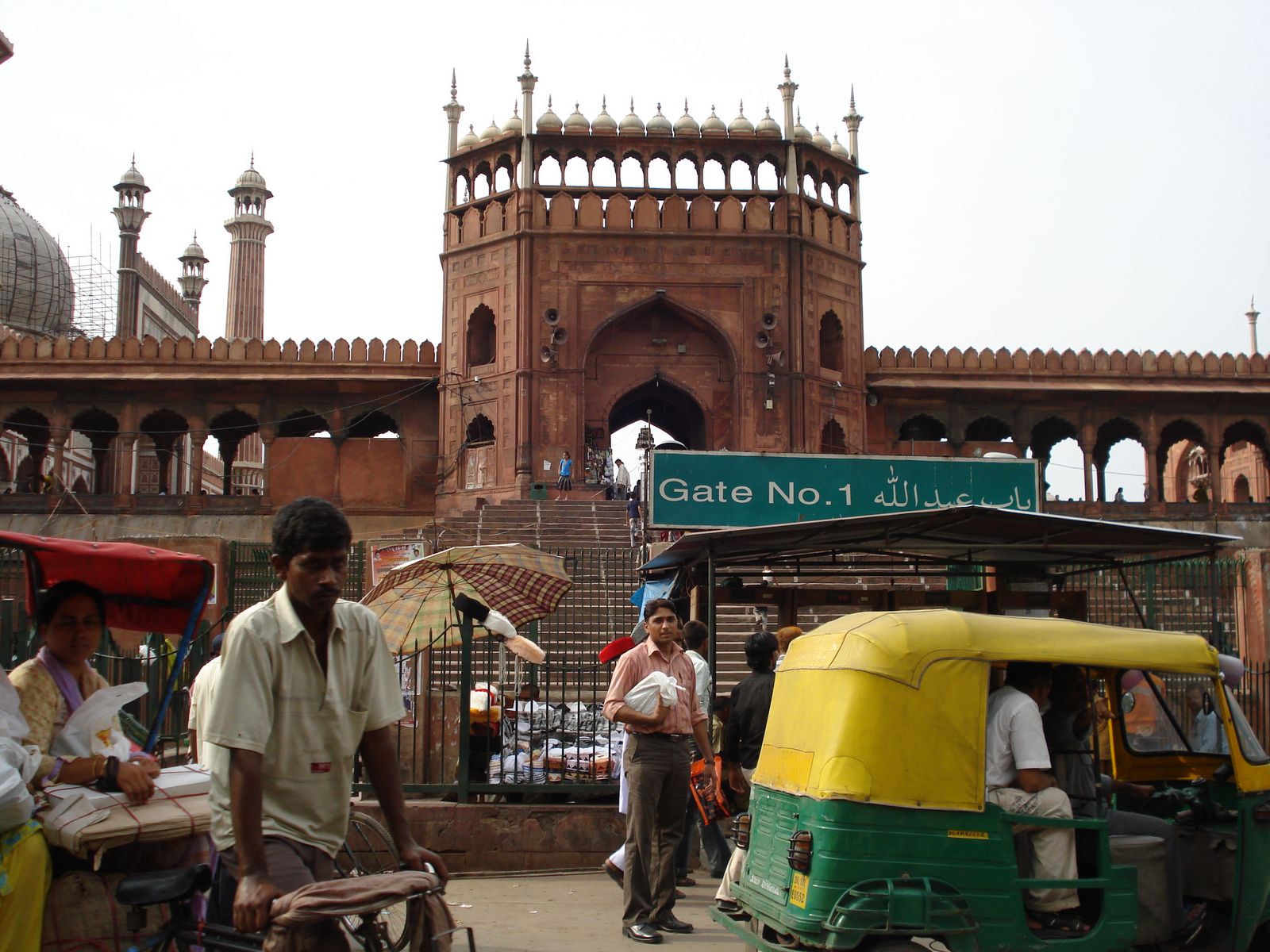 The Features of Chandni Chowk are:

Chandni Chowk originally stretched from Lahore Gate of Red Fort to Fatehpuri Masjid, and it was divided into four parts. The first part, Urdu bazaar, which extended from the present Jain temple to Dariba Kalan.

The second part from Dariba Kalan to Kotwali, came to be known as Phool Mandi or flower market.
The third one from Kotwali till the present Town Hall, was known as Jouhari bazaar or Ashrafi bazaar. The fourth part, proper Chandni Chowk, stretched from Jouhari bazaar till the Fatehpuri Masjid. The Britishers changed a lot of this part as they filled the canal flowing through it with a clock tower that later collapsed. I wish I could share with you the pictures of the lovely canal flowing through this magnoficent area, with the clock tower standing close to the Town Hall.

I found most of the streets converted into the wholesale textiles market . The jewellery shops around the area are simply tempting. 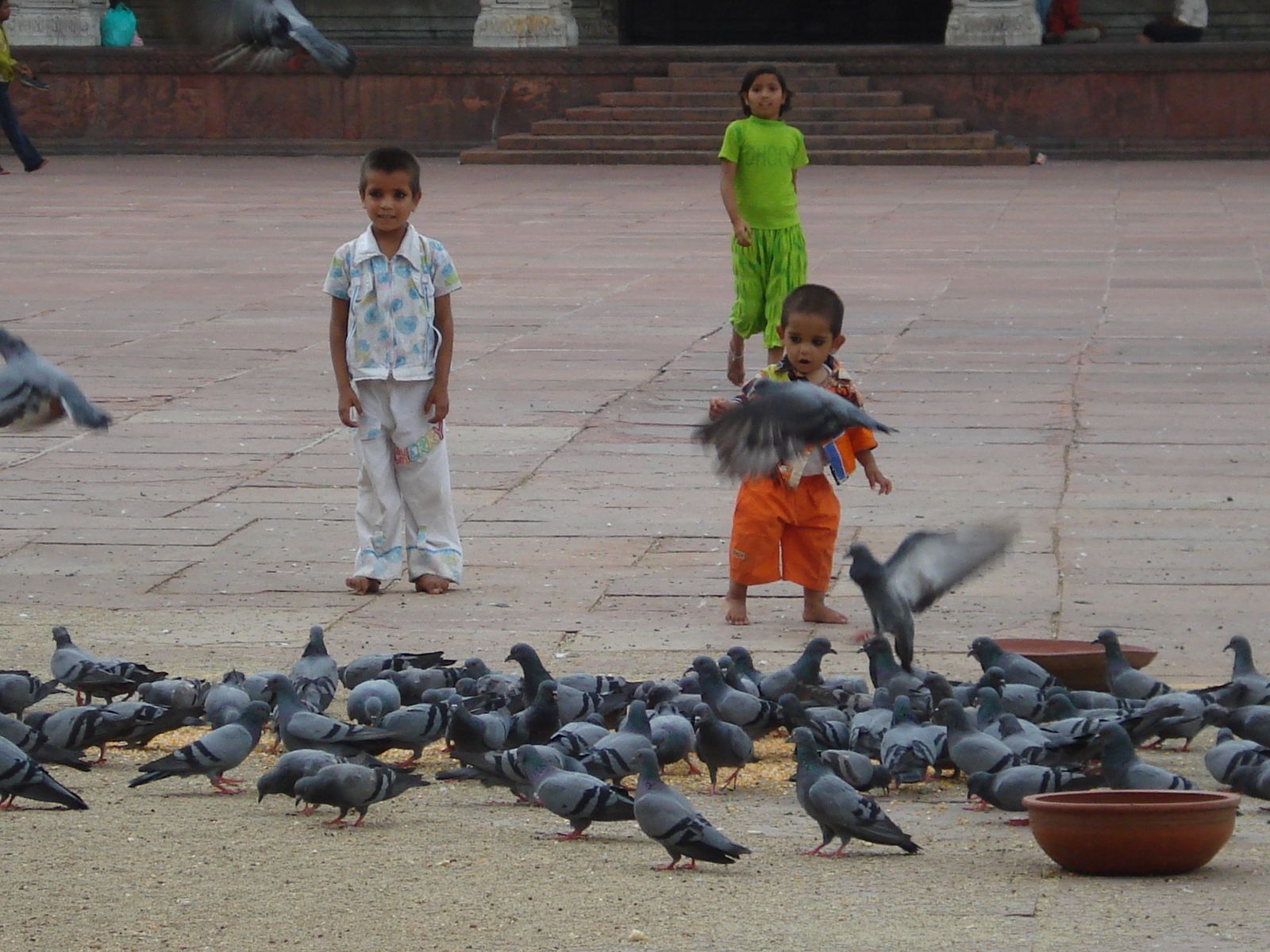 Considering the obscenely high prices of gold these days, I and my family thought it better to go in for shopping in the main market(bazaar) of chandni chowk . We did pick up some good fabrics for my mother’s dresses and I picked up a few Tintins, Astreixs and some Hardy Boys books from the pavement shops, which sell old and used books.

By this time we felt hungry and moved to the famous Paranthe Wali Gali, an old eating by lane existing since the time of mughals. “Paranthe wali Gali” (‘gali’ means street that sells ‘paranthas’ – an Indian food delicacy, sort of chapatti) has seen almost three passed centuries . It houses descendants of the royal chefs of yore who make Paranthas that taste heavenly. So much so, that the Parantha is perhaps the only food in the world to have an entire street named after it!. . Sizzling hot paranthas are being fried here! Each day the dexterous hands of these chefs toss out the most amazing concoctions of a parantha. Plain paranthas, salted or sweet paranthas, dal (pulses) ka parantha, gobhi ka parantha (minced cauliflower), radish parantha, pudina parantha (mint), popadom parantha, cashew nut parantha – the variety is endless. You name it and they have it! All one is required to do is to knead some dough into small balls, roll it on a wooden base, add fillings ranging from cottage cheese, potatoes sprinkled with chopped ginger, and exotic Indian spices, fry it in ghee or butter and viola, it’s the perfect recipe for a lip-smacking parantha. At moment there are about 40 varieties of parantha. I also ate Kurchan parantha which are stuffed with KURCHAN which is a sweetened concentrated, whole milk product similar to RABRI. Paranthas here are not too expensive. The cost of food was just Rs 300 including the beverages. 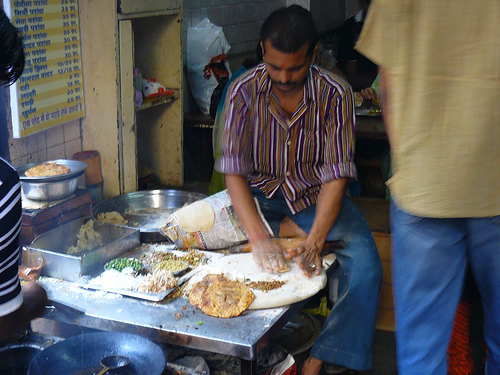 After having the lunch we moved to eat the famous rabri falooda of Gyani’s. 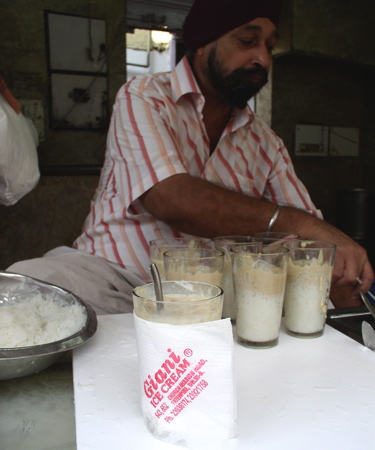 Then we moved to famous Gurudwara Sisganj Sahib Located on the main Chandni Chowk road, is one of the most sacred places of the Sikh community in the capital, Gurdwara Sisganj. The gurdwara commemorates the site where, on the orders of Mughal Emperor Aurangzeb, Guru Tegh Bahadur – the ninth guru of the Sikhs – was beheaded. He was martyred here in 1675 under a banyan tree because he objected to emperor’s use of force against the Hindus, who refused to renounce their faith and religion. 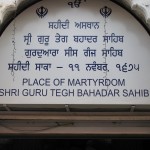 As per the tradition, to visit the gurdwara, the visitors are required to leave their shoes outside at the counter and cover their head. Though one can go to the main worship place directly but it would be better if one first visits the ‘Information Office’, located near the entrance, from where a member of the Gurdwara Management Committee will accompany and show the visitors all-important places within the gurdwara. The main worship room of the gurdwara, which is very spacious and magnificently lit has the Sikh Holy Book, the Guru Granth Sahib under a beautifully carved golden canopy. Near the room is also kept the part of the banyan tree under which the ninth guru was killed. There is also an enclosed structure where the guru was held prisoner before beheading.

An important feature and attraction of all the gurdwaras are their community kitchens (Guru ka langar), which oppose discrimination based on caste and stress the concept of equality. Here people of any background, religion, caste, color and creed eat together. The community kitchen of the Gurdwara Sisganj too feeds around 2000-4000 people everyday and one must try the food for the experience as well as the taste which is quite simply delicious. 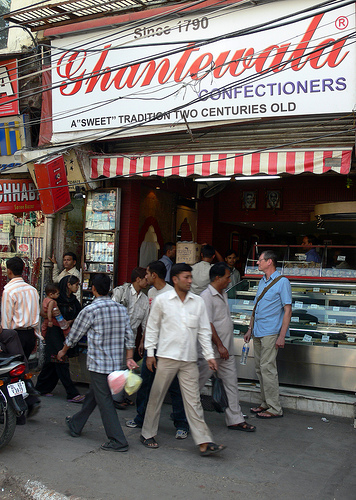 Going to Chandni Chowk and not visiting the oldest sweet shop “Ghantewala” operational since 1780, is almost like committing a sin.They are known to prepare all their sweets in pure ghee, a sure sign (at least by Indian culinary standards!) that it’s good. The range of sweets is splendid- and you can either eat the sweets there itself or have some packed. But as these preparations are of pure desi ghee I didn’t even think of eating these (considering that I am already overweight by ten kgs.)

In the evening we went to the the Tiwari Bros established in 1986 to taste their famous samosas.</p 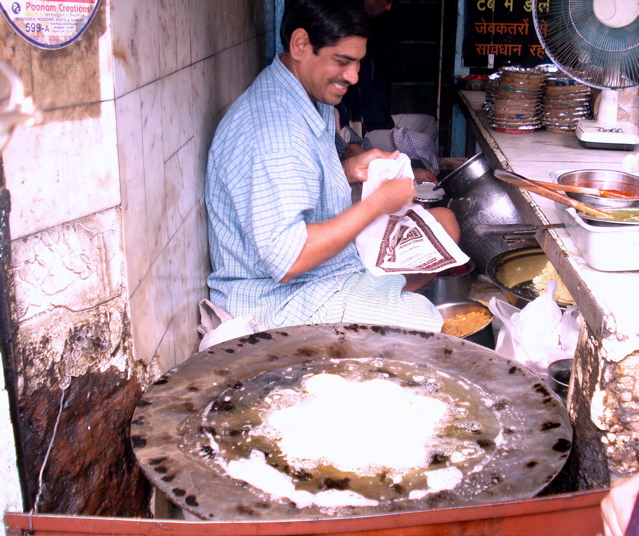 Lajpat Rai market, close to the Red Fort crossing houses hundreds of shops selling electronic gadgets, audio – vedio CDs and what not. We spent a good part of the evening picking up some DVDs of latest and films of the yester years.

At night we went to Karim’s famous restaurant in the heart of Old Delhi, not far from the Jama Masjid, remains one of the best places to sample rich Mughlai food. This legendary eatery dates back to 1913, when it was opened by Haji Karimuddin in Gali Kababian saying, “I want to earn fame and money by serving the royal food to the common man”. I had eaten lots of stuff which was famous there like Nihari , Makhni Murg, Badshahi Badam Basanda, mutton cooked with blended almonds and yogurt and fragrant spices. After a lot of walking I was tired but I enjoyed a lot.

It was really a lovely experience going through the narrow lanes of Purani Delhi. I really enjoyed being in the center of such a plethora of food. I really wished that I had more time to spend there but I had to return home.

Background It all started from a discussion with Nandan when he gave an idea for a long road trip from Delhi to Mumbai. It…