SILVASSA (AMLI)-DAPADA
We had already planned to visit the deer park in the morning and later Dudhni Lake in the evening. We also found out that from Silvassa towards south the deer park comes first and then comes Dudhni Lake. I heard about Dudhni Lake turning romantic in the evening. It just matched my mood since I wanted to do some wildlife photography in the morning & relax in the evening. Our main challenge was to reach these two spots on time and without any expensive transportation. Fortunately, from the hotel where we were staying at AMLI chouk , it had many options available for transportation. We got a private bus to Silvassa Bus depot with a bus fare of Rs10/- per person. Further, we were directed to take another bus to deer park which is on the way. Now as soon as we inquired about this deer park (which is very famous online) to the locals and drivers and conductors who are offline, no one actually know such a place. Fortunately, an uncle came to our rescue while removing ticket and asked us to take a ticket for “Dapada” which according to him is what the drivers call that place instead of deer park or sanctuary. The ticket cost from Silvassa to Dapada is Rs 15/- per head. The bus started very late and the journey is quite long too. Although I had seen the timings for the park online I forgot the exact timings of the park. As soon as “Dapada” arrived the uncle asked us to request the conductor to drop us exactly in front of the park which he did. There are no arrangements in DNH when it comes to travelling. No public transport facilities near and around tourist spots even though it is an U.T with tourism as their main business.

Once we reached “THE DEER PARK” which is also called as “BANGANGA WILDLIFE SANTUARY” or “SATMALIA DEER PARK”, we were amazed to see the beauty in and around the park. It is this place from where the actual DNH starts in terms of nature and scenic beauty. 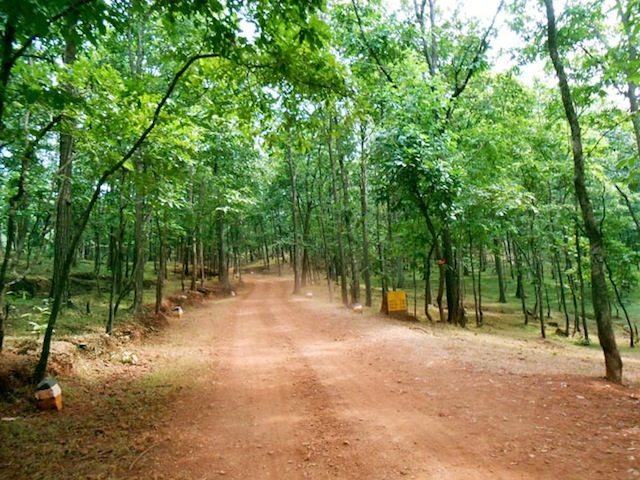 The park is well maintained with a strict visiting time. The park is open on all days except Mondays and the timings are 7:00am to 11:00am & 3:00 pm to 6:00 pm. There is an arrangement of jeep and bus for the deer safari which takes a round through the forest and halts for few minutes as soon as a deer is spotted. The photographers can then take snaps of deers from within the jeep/bus. The census of the “SATMALIA DEER PARK” is as follows. 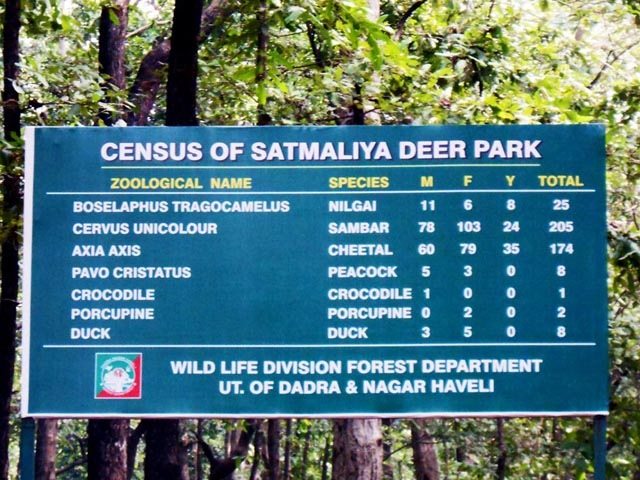 The safari tour takes 20 to 30 mins. Luckily we reached the park exactly at 11:00am and we were the last one to get the entry ticket for the morning tours. The Entry Fee is Rs25/- Per Head. It was an amazing experience with the deer safari. We got lucky enough to shoot few Sambars as those were wandering quite close to our route. We couldn’t spot a single peacock or duck. We spotted a few Nilgais grazing. The Cheetals were spotted from long distance as they like to stay in the dense and just lay around. The most spontaneous and daring were the Sambars as if they were trained. Every time they heard our voice or a vehicle moving on the road they use to simply gaze at us, which reminded me of one of those horror movies in which suddenly the Sambars go crazy and attack the driver. Well coming out of my fears there were few Sambars who were also giving us poses for our photography. Check for yourself. 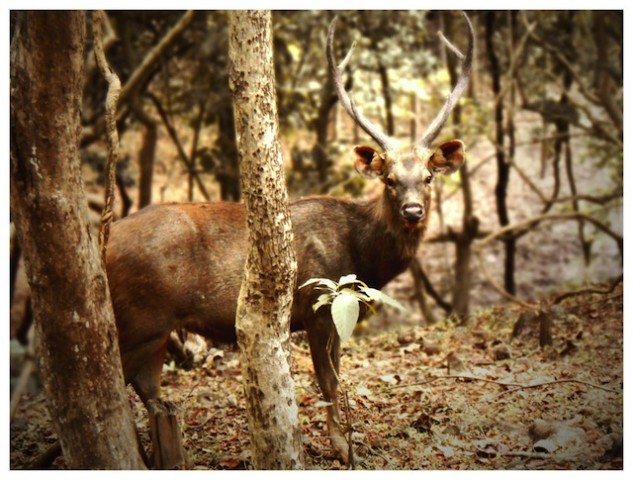 I would say the ones giving poses must be female Sambars..ha..ha..ha..ha… Me and my boyfriend really enjoyed this small safari.

DAPADA-KHANVEL
It was already late afternoon and we started feeling hungry. We decided to further move towards Khanvel which is on the way towards Dudhni Lake which was our ultimate destination for the day. We had read Khanvel is a must visit place on online. So we assumed to find a restaurant or a dhabba over there. We took a share auto to Khanvel for Rs10/- P.P. The road from “SATMALIA DEER PARK” to “KHANVEL” was the most picturesque with farms on each side of the road. The road is plain and smooth and goes up and down like a rollercoaster. The farms had turned golden brown with beautiful date trees on the edge of the farms. The trees made a beautiful pattern. How I wanted to stop and click pictures of the scenic beauty but I couldn’t as I was sharing an auto. I am sorry I could not get a single picture of those farms or the trees. After reaching Khanvel chouk to our shock we couldn’t locate a single eatery or restaurant in Khanvel. It is a much laid back village with just a market sort of stalls near the chouk.

Khanvel has got famous due to the luxurious resorts and their spread out properties in that location. We somehow managed to find a hotel which was serving a buffet lunch. But to our disappointment they were serving it only to their staying guest. We requested them to arrange for us too on which they agreed to serve two buffet meals costing RS200/- each. We agreed to the price considering the situation. I promptly asked the manager if it was a veg or non-veg meal to which he replied “veg”. As soon as my b/f realized it was a pure veg hotel, he made a quick escape and I joined him too as I know his love for Non-veg food. J We again walked till the chouk looking for a place to eat. On the way we spotted the Butterfly Garden and the famous Tribal museum. Since we both were too hungry and way too behind from our planned schedule, we gave both the places a skip. Finally, just like an oasis we found a nice decent restaurant (hotel Hill Top) where we had our full-fledged lunch with a total bill of just RS200/- .

Hotel which saved our day

The food is delicious and the owners are polite too. They serve veg/non-veg with variety of cuisine to choose from.

KHANVEL-VAGHCHOUDA (DUDHNI LAKE)-KHANVEL-AMLI
Further we took a bus from Khanvel chouk to Dudhni Lake which the locals call as “Vaghchouda”- our final destination. Bus ride cost us Rs 20/-each. The bus was over crowded with local tribal people occupying the space. They all were stinking of alcohol and spirits which they must be consuming on daily basis. Even the women were intoxicated..lol. Finally we reached Dudhni Lake only to realize that we still have to walk further around 2km from the bus stop towards the pier which is an inclined road. We enjoyed walking that too. Wow! The pier was beautiful. The docked Shikaras made it a complete picturesque view. We took a ride on Shikara. The rates are nominal with Rs200/- for half an hour ride and Rs350/- for one hour ride. We bargained for Rs300/- .That was the most romantic one hour with my boyfriend during the whole trip. I couldn’t capture a sunset picture as it was too cloudy that day, but the spot is perfect for a sunset view. The crowd starts pouring in after 5:30pm. Now it was a real challenge for us to get on top at the main road. We did some tracking on the inclined road only to realize that we missed our last bus. Till the time we could decide anything further we rested at a nearby pan-bidi stall and my boyfriend started inquiring about all the options available for traveling back to Khanvel. Now a funny incident happened. My b/f forgot the name “Khanvel” and instead started inquiring about a non-existing, self-named place called “khelwa”:-D on which the vendor couldn’t guide us anything. At the same time I was quite disturbed with a group of local young boys who were on their bikes. They seemed to have returned from a football match and they were constantly cracking jokes on us. Looking at my pissed off face they started making fun of me & thought I wouldn’t be able to notice it. Later I shifted my attention towards my b/f who was still trying to get help from the vendor. That is when I heard him say the word “Khelwa” and I burst out laughing. I quickly realized he was again goofing up with the name. I promptly corrected him on which even the vendor and my b/f started laughing out loud. By then the group of boys realized we were just like them and not an alien. Finally they all helped us find an auto. The vendor called an Autowala who agreed to take us to Khanvel. We bargained for the fare. He dropped us till Khanvel chouk in Rs200/- and he was ready to further drop us at Amli but we declined the offer as we thought we will get a bus from Khanvel to Amli. On inquiring about the bus timings we learned that we had just missed the last bus and usually the last bus leaves at 8pm but that day it had left quite early. Finally, we took an auto ride for Rs 250/- and reached our hotel.

SILVASSA (AMLI)-VAPI-VIRAR-ANDHERI
We failed to get a reservation for a train to reach Mumbai so we decided to check out options at Vapi itself. We checked out from our hotel at 12 in the noon, took a share auto till Vapi market for Rs30/- each and further from Vapi market to Vapi bus depot Rs20/-. At depot we came to know once again we just missed the bus for Mumbai. There are other private buses which plies from Vapi to Mumbai but we felt they were expensive. Finally, again we took an auto for Vapi station for rs20/-. There are various trains from Vapi to Mumbai right from express trains to Passenger trains.

We took direct first class ticket from Vapi to Andheri for Rs 180/- each.

Finally we boarded an afternoon passenger Virar train. It was a good decision on our part since first class coaches were almost empty and we travelled Virar comfortably. Just that the passenger train stops at every station on the way making the travel time lengthy. It took 2 ½ hours to reach Virar and from Virar we took Andheri local.

Silvassa, safari and then on was last modified: April 30th, 2022 by Flashes Pearlies

Kesariya Balama Aavoni, Padharoni Mare Des Re – These lines attract most of the domestic & international Tourist towards Rajasthan Some of the places…