Delhi is very hot in every summer season therefore I was planning to go somewhere nearby Delhi to spend this weekend.

On Saturday 9-Jul-16, we wrapped our office work and decided to heading towards Haridwar and Rishikesh.
We took Metro from our Office and reached Kashmiri gate ISBT at 9pm. We came out from metro then took dinner at Dhaba near ISBT and went inside bus stand launge.

When inquired about Janrath, conductor told us that all seats were occupied and we decided that not spend to Rs. 700+ for Volvo’s bus so finally boarded in Normal UP roadways bus.
It was 10:30pm when bus departed from Kashmiri Gate ISBT but we were unfortunate because we were stuck in huge traffic jam till Modi Nagar. 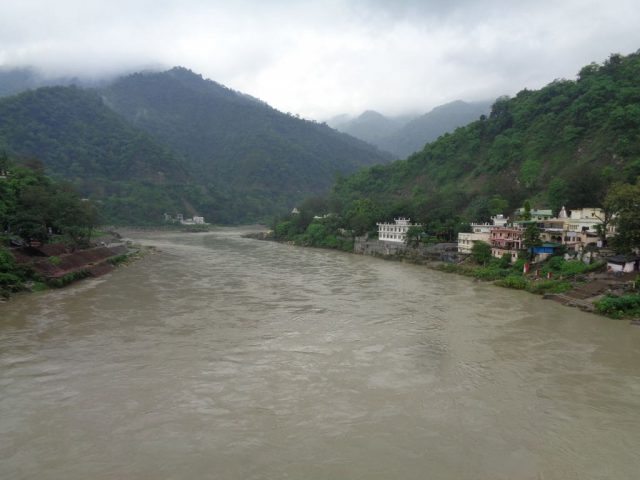 When bus stopped at Dhaba near Khatoli, a small town in Muzaffarnagar, for 30 minute we had took some snacks and again we moved towards Haridwar. It was the mid in the night and we were feeling sleepy, but driver was driving too fast & honking, so it was next to impossible to sleep in the Bus.

We took an autoriksha from Railway Station to Har ki Pouri, they charged us Rs.20 each due to it was night time. After reached Har Ki Pouri, we seated on the bank of Holly Ganga for some time to feel the nature.
When sunrise started, views and feelings were awesome, we enjoyed Ganga Arti in morning than start bathing.
Ganga water was very cold and flow was extremely fast, peoples are hold steel chain in there hand while bathing inside Ganga to avoid flashed in the river but I was thinking something different. 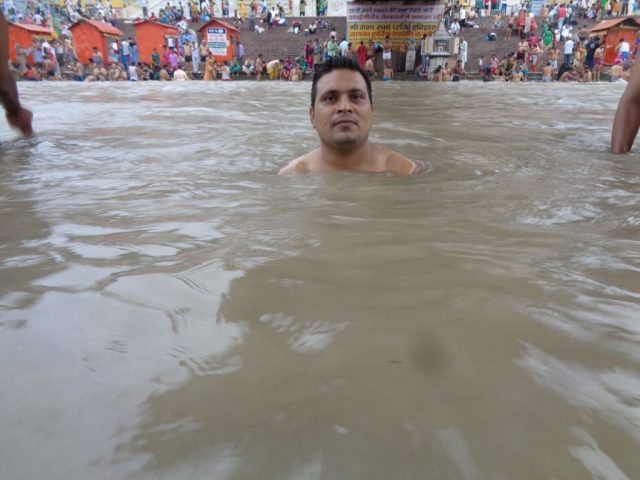 After taking Holly bath, we started climbing to Mansa Devi. Mansa Devi is situated at highest peak in the
Haridwar, there is 3 ways to reach at Mansa Devi.

1. Peoples can take Ropeway from main market to Mansa Devi, total time will be taken, not more than 10 minute but if there is rush, then they will wait according. Fare of the Ropeway was 61Rs.
2. There is small and narrow road till Mansa Devi from main market, but road can be used for bike only, and it has 4-5 km long so only people’s with bike are using it.
3. This is the last way which has maximum used, there are stairs from main market to temple. Way is approximately 1.5 km long. This is moderate track and any one can complete within 1 to 1.5hr. View’s from Mansa Devi to Haridwar is amazing and people’s can see the whole Haridwar city from top. 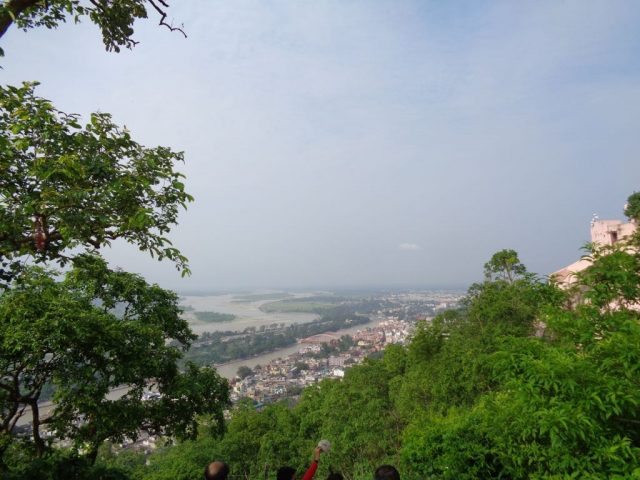 We took the stairs route and reached at Temple; keep our bags and shoes in the shop who selling Pooja stuff, then purchased some stuff for Pooja and went inside Temple. There was so crowded inside Temple but we were easily visited. After visit the Holy Temple, we took some photos outside the Temple and started to moving towards Har ki Pouri.

After came back to Har ki Pouri, We took Auto Riksha from Haridwar Bypass and they dropped us near Lakshman Jhula in Rishikesh and charged 50Rs each. 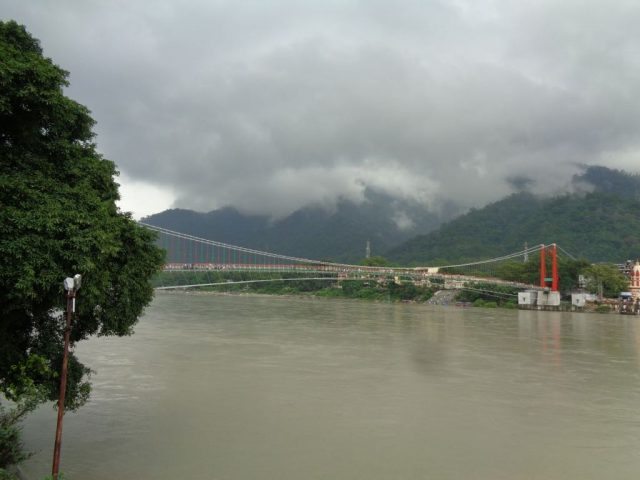 We amazed that Haridwar was very hot but Rishikesh seems so Rainey, When we reached Laxman Jhula, there were downpour so we were covered ourselves inside someone house. 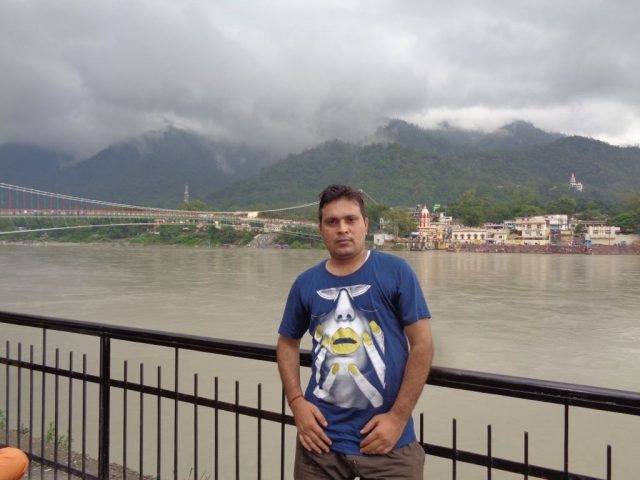 When rain was slow, we reached Laxman Jhula and took some photos and started to enjoying Beautiful natural scenery. We spent some time to roam around to see cloudy Rishikesh in this Mansoon.

In this Monsoon, Rishikesh views were amazing, and we scared because Rishikesh was much cloudy and Ganga was flowing extremely fast.

Now time was afternoon and we were feeling hungry because we had not took anything’s since morning so we decided to escape breakfast and take the lunch on next Dhaba. we started to moving forward slowly by walking from Laxman jhula to Ram Jhula, then we saw a Dhaba on road, so we went inside and ordered for Thali, foods were not tasty so we did not eat whole Thali and left half foods inside thali. We were again filling hungry so took some fruits in the way and started moving ahead.

When we reached at Ram Jhula, we did not notice any major difference between Ram Jhula and Laxman Jhula so took some more photos and boarded in Auto Riksha to Triveni Ghat. 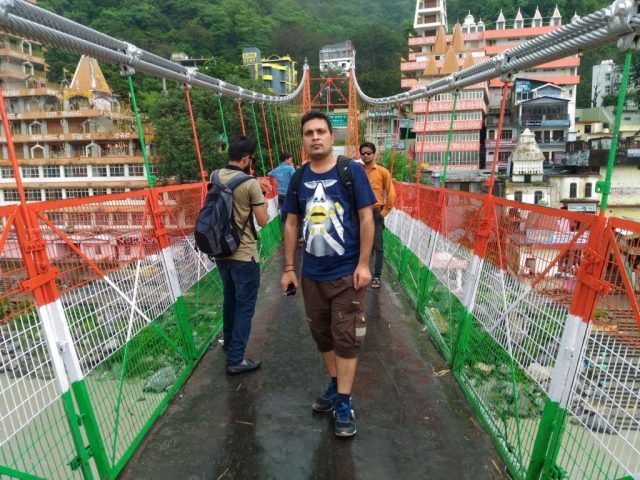 When reached to Triveni Ghat, I was going to take the bath in Holy Ganga but when saw the flow of Ganga, I was scared. 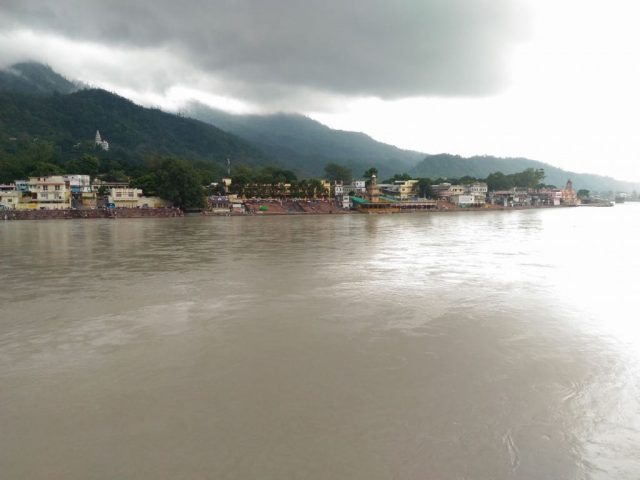 I went inside Ganga and feel that was not able to bath inside, there is chances to flush into water so give-up bathing idea and seated on there for half an hour.

Now time was passing slowly and we were feeling sleepy, our plan was not to stay in night at Rishikesh so we decided to our return journey.

We started walking to Bus Station which was 2 Km ahead from Triveni Ghat. It was 2 PM in the day when we reached Bus Station and started to searching bus to Delhi. There was one AC Janrath bus standing behind us but all tickets were full so we boarded in normal roadways bus from Rishikesh to Kashmiri Gate Delhi. Fare of the bus was 255Rs each, and bus was departed 3:30Pm, due to some unknown reason, bus was running slowly and took 8hours to reach Delhi.

We came out from Bus Station and boarded in the Last Metro from Kashmiri Gate and finally reached our home in the night.

We spent INR 1000 each from Delhi to Delhi for everything.

My Delhi-Rishikesh monsoon round-trip, in less than INR 1000 was last modified: May 5th, 2022 by Sangam Mishra

I am Sangam Mishra from Delhi, Working in MNC, want to explore every possible place in the Earth.

morning freshness of the hills greets you from all over your surroundings and now you experiencing all this with a cup of tea holding with both your hands, in the semi open dining area of the camp, surrounded with lush green trees and chirping