The planning started for a group of six people, and the final day, we were three. A little awkward was it initially as the rest two were a couple. My closest school time friend and her husband.

Trip to the heart of country

Though March end was not the best time to visit Khajuraho and Panna, but one of the best trips it had been. Rushing from office under some haphazard circumstances, and finally boarded the train Uttar Sampark Kranti Express from Hazrat Nizamuddin station, New Delhi. Very comfortable night journey passed with some chatter on Indian civilizations, history, sculptures and finally meeting a localite from Panna, sitting next berth who told us a lot about our destination – what all to see, what all we shouldn’t miss, the facts about Panna, the new animals in the Panna Tiger Reserve, where they come from etc etc. He told us to visit the other part of the jungle with some new baby elephants which was mostly less safari’ed, and the Panna diamond mines. He told us he would get us the permission of these restricted areas and so we discovered that he was a Chief Magistrate judge in Panna Court. So did he help us through phone getting permissions to these areas while we were there. Not only this, he had called up at few of the places before we visited there so that we would not need to pay for the tickets and jab ek chote se shahar mein ek Magistrate Sahab ne kuch kaha ho toh kisi zurrat ki woh entry fees le le, chahe woh Pandava Caves ho ya Light and Sound Show(In a small town, nobody can dare to deny the chief magistrate judge of a court and ask for money). It was big time fun.

Day 1: We landed Khajuraho at 7:00 am in the morning with a beautiful sky up above.

The beautiful Mahua trees with yellow leaves greeted us and paved the way to our hotel Tourist Village which is under MP tourism. Since March is not the peak season, we got very good negotiations for our stay. We did not have to pay the extra bed + 20% discount + waiving off service taxes. It is a small yet nicely maintained and an economical hotel with very humble staff and a good service.

Our Taxi driver whom we hired for the complete day<and later for the rest of the trip as well> to take us through all the temples in Khajuraho helped us knowing more about Khajuraho and Panna. He charged somewhere around Rs 650 for the whole day.

Khajuraho(situated approximately 620Km from Delhi) and Panna(around 27 kms from Khajuraho) lie amidst the Vindhyachal mountains. The rocks are mostly Sandstone and Granite. Panna’s green area is covered by 70% of Saghawan(Teak) trees which is an expensive wood. Rest are mostly Cheola trees that have the red petals which are used for making dyes and gulal<used as a color in Holi festival>. The paste of the fruit(made in bronze vessel) is used to treat sun strokes(loo in hindi) and diabetes. While the leaves are used in making disposable plates and cups(traditionally called pattals in hindi). Roots and bark also serve good medicinal values. Khajuraho and Panna have a lots of Mahua trees, which had Yellow leaves when we visited. These trees are also very beneficial amongst the local tribes and the rural people. The flowers of these trees are very sweet and are used for preparing drinking alcohol. While the seeds generate oil that can be used as fuel oil or cooking(good for heart patients). The fruit can be eaten cooked or otherwise. Madhya Pradesh green cover is rich in Ayurvedic herbs and medicines. Panna area is a rich forest area full of such medicinal herbs. <Thanks to my little diary which I carried all the way through the trip which still bear all this information I am sharing>. 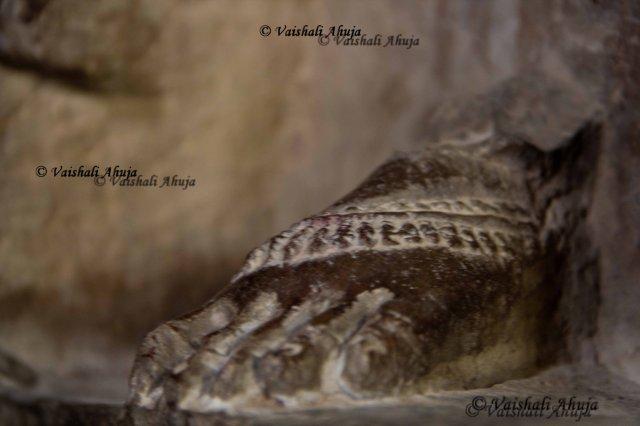 Some remnants under the beautifully carved temples @ Khajuraho

These temples were build over a period of 100 years from 950-1050 AD and were almost in ruins before 20th century, but are now under restoration. The gardens around these are well maintained and are clean. We did not find any kind of prayers being performed at these temples specifically. They are more or less treated as historical temples. There were around 85 temples built out of which there are 22 excavated till now.

The temples are classified amongst the three groups : 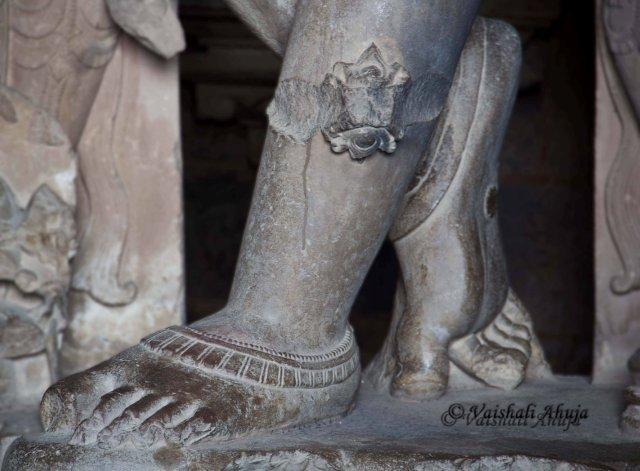 These all temples lie within a radius of 5 kms. There is no traffic and hence an easy and smooth drive within the city. One peculiar thing we noticed was all localites were driving very slow. I was feeling so good, out of those rushing hours in Delhi, to a place where time was not rushing with the list of tasks you get up every day with. 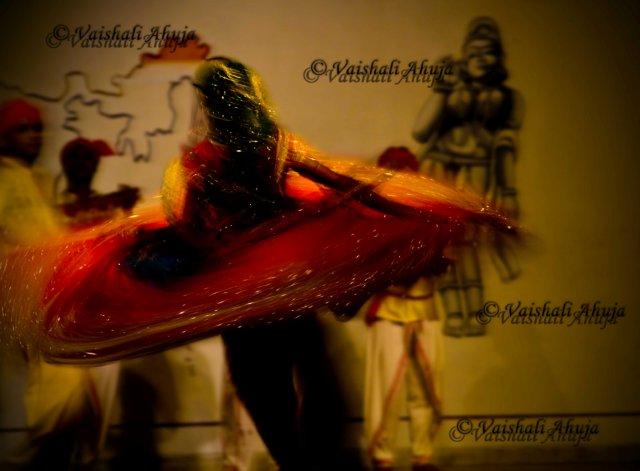 Being the month of March, the earth was too hot in the afternoon and we retired to the hotel to take a small nap so that we could enjoy the evening at Faciliation center watching the Folk dance show which starts at 6:30 PM and to the gardens of western group of temples again to watch the sound and light show which starts at 7:30PM and these two areas are just 5minutes away from each other on a vehicle. Both were worth watching. The entry fees for each of these shows were approximately some Rs 100-120. The light and sound show is recorded in Amitabh Bachan’s voice (first show is in English, followed by the second at 8:30 which is in Hindi) narrating the history of Khajuraho and its temples. The story told about the birth of Chandela dynasty when the moon god feel in love with a beautiful Brahmin girl Hemavati and their union gave birth to their son, followed by Hemavati moving to Khajuraho with her son. Her son founded the Chandela dynasty and built these temples. The story was accompanied with beautiful lightning of the temples.

Khajuraho is also famous for its annual dance festival which happens from last week of February to first week of March and dancers across the world participate during this festive and colorful event. We happened to miss this event by 20 days.

After spending a complete tiring day in Khajuraho covering almost everything, we headed for Ken river lodge in Panna next morning. This resort is just 1.5 kms away from the Panna Tiger reserve gate. We kept our belongings at the resort we pre-booked and talked to our train friend Mr. Magistrate to get permission for the Diamond mines and the elephant camp side of the Panna tiger reserve which is towards the Panna city, around an hour of distance from the resort which is situated at the banks of Ken river.

We first visited Pandava waterfalls and caves(around some 4-5 kms from Ken river lodge) where we spent pretty good time enjoying the small mineral water fall and clicking some pictures with it. The Pandavas had spent some 3 months of their exile period in the caves here.

Then we went to see the Diamond mines where a police inspector took us inside and showed us the deep mine plunged and the raw material extracted. We were not allowed to take pictures of that place as it was highly confidential area. After that we headed for the other gate of the Panna tiger reserve at Hinauta which is the Elephant camp side of the forest. Unfortunately the elephants and their babies had gone to the main jungle and were supposed to return by evening. So we planned to come back to see them the next day.

We went back to our resort which is beautifully built giving a perfect jungle retreat. It has a tree house restaurant giving a view of Ken river where we could cite plenty of life like parakeets, kingfishers, turtles, storks and crocodiles in the river. 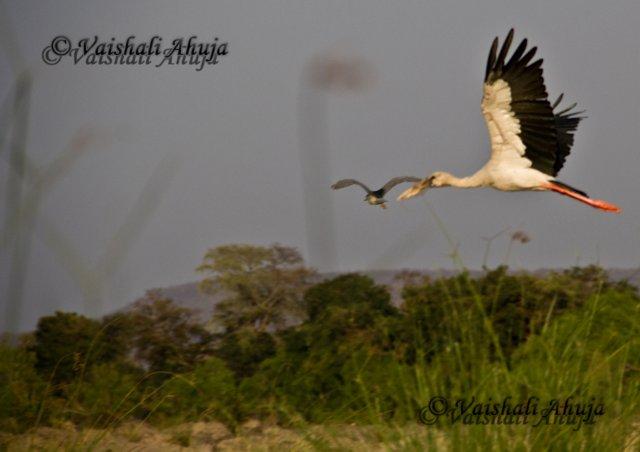 The beautiful sunset was mind boggling. I was immersed in the beauty around. 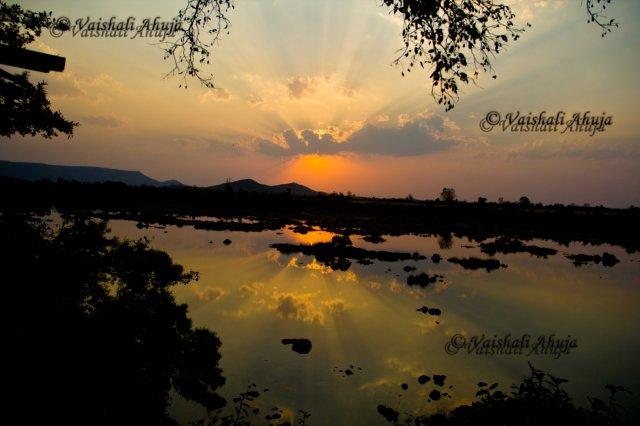 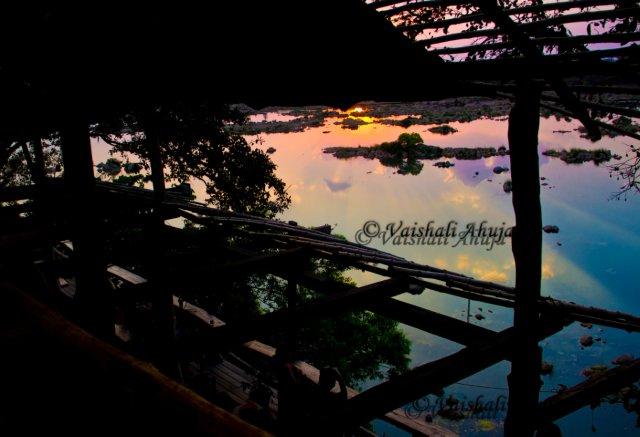 Next early morning at 5:30am we started for our safari to Panna Tiger reserve with a naturalist and a guide. They helped us knowing more about the flora and the fauna of the forest. We spotted 4 horn antelopes, deer, spotted deers, sambar, neel gai, chimpanzees, peacocks, eagles, vultures, jackal, crocodile, and plenty of birds. We also saw the baby elephants as we went to the other end of the jungle where we went the last day as well. We played with the elephant babies. 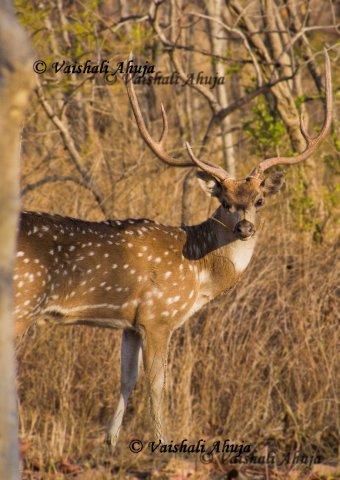 It was good fun package. However we could not spot a single leopard or a tiger. We could just spot the pug marks.

Currently there are 3 tigers and 4 cubs in the reserve and 25 leopards in the reserve(the number of leopards is an approximation only since there is no tracking of number through gps devices as done for tigers). 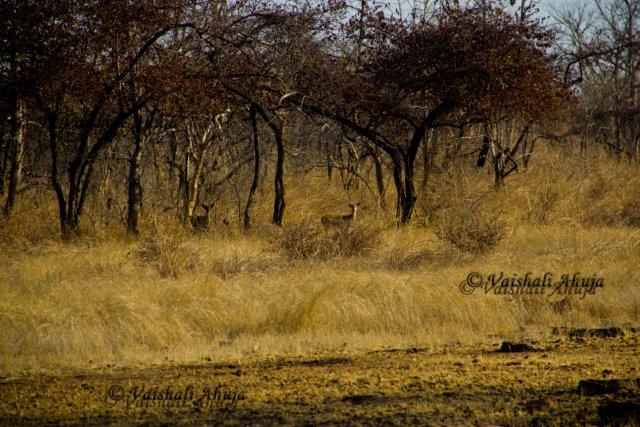 Antelope in the golden forest

We enjoyed rest of the day at the resort and went for boating and river bathing in the evening.

A dip in the Ken river, Panna

River bathing was an amazingly good experience for me as I haven’t got many chances with it earlier.

After the sunset @ Ken river 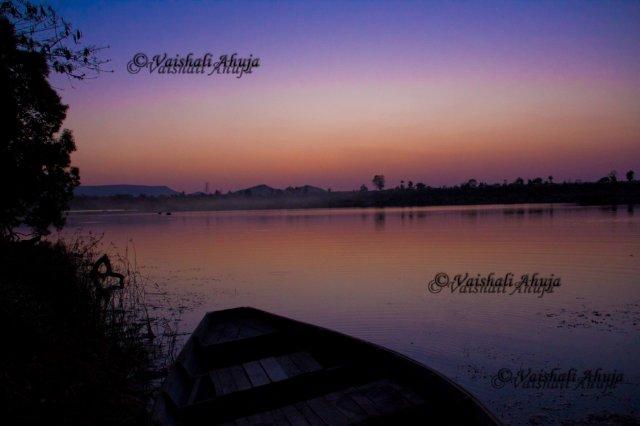 After boating we retreated towards our huts

Next day morning, we left for Safari at 4:45 am since a new Tigress was to move from Kanha reserve to Panna Tiger reserve because of which the main gate of the reserve was closed and we had to enter from the other side of the jungle from Hinauta(elephant camp side). We pretty much saw the same species of animals we saw the previous day with no exception. We then went to see the Panna court building which was earlier some palace converted to a court. We also visited our friend’s house to say thanks to him since he had made this trip easier for us, letting us visit all restricted areas.

We had a train in the evening from Khajuraho which led us back to Hazrat Nizamuddin station, New Delhi at 7:00 am in the morning.

Encouraged by the feedback on my Badrinath Kedarnath trip report, here I am with my new offering on the Jagannath Puri. This part is…