Introduction:- This journey of ours was begun out of necessity. We have a pet dog and cannot part company with him even for a few days, so we take him wherever we go. Our choice of buying a vehicle was also dictated by the necessity of giving him a comfortable rear seat to relax in. During a previous trip to Mumbai, which is our home town, we had travelled by air with our pet but he did not take that trip well…..So it had to be a driving holiday.

The Travellers: – The travelling party consisted of me with my wife and two kids aged 8 and 2 and of course our Golden Labrador Tissue Paper……..Don’t ask he was named by our daughter. 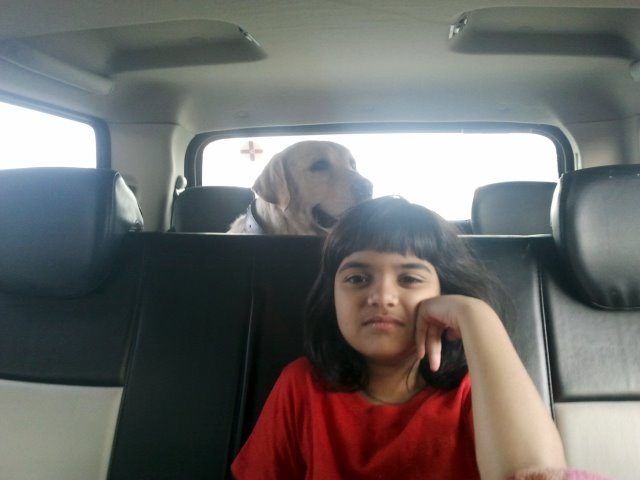 The vehicle: – We have a 1 year old Mahindra Xylo which has done about 5000 kms and was raring to go on a long drive as in city driving does not even tax its abilities. This baby proved to be a good choice with its long legs, comfortable seats, strong engine and menacing front end which had other cars scooting out of the way when they saw this black behemoth in their rear view mirrors. The black beauty is equipped with a video screen and also has folding seats for beds which help preserve your sanity when travelling with two brats.

The route: – We decided to take the Golden Quadrilateral since we had done Mumbai – Patiala earlier in 2006 and expected that the road construction work would have finished by now. The plan was to cover the 750 kms up to Udaipur on the first day, have a night halt at Udaipur and do Udaipur- Navi Mumbai on the next day thereby doing about 1500 kms total. It seemed a daunting task at the time but we were determined to do our best as we had to get away from Delhi as the kids’ vacations were on and the grandparents on both sides were waiting. Both my wife and I hail from Navi Mumbai with both our homes being about seven minutes walking distance away.

Delhi – Jaipur: – We set off from Delhi Cantt at about 6.00 am on a Sunday in early June and were hoping to cover this stretch before the world wakes up but little were we to know that Indian truckers do not sleep like the rest of us. We hit heavy truck traffic from Manesar itself and it continued till our brunch halt about 40 km short of Jaipur which we reached finally at 9.45 am. This stretch of road NH -8 is of very good quality with a few diversions but the volume of truck traffic is very high and to top it all these truckers do not stick to one lane and keep darting all over the place consequently forcing cars to overtake on the left and weave through frequently. Wish someone issues traffic manners and civic sense with driving licenses in India. After a one hour halt for brunch, some much needed exercise, food and water for Tissue paper we set off at about 11.00 am for Jaipur and beyond. Some 20 km short of Jaipur, a well bred English voice in our car (our satellite navigation system) urged us to take a right turn which we followed and found ourselves inside Jaipur city instead of taking the bypass as we intended. So we decided to make the best of it and took the touristy route through Jaipur as guided by our English nag. After a nice tour of the city we found ourselves back on the highway to Ajmer.

A view of the Amer fort at Jaipur 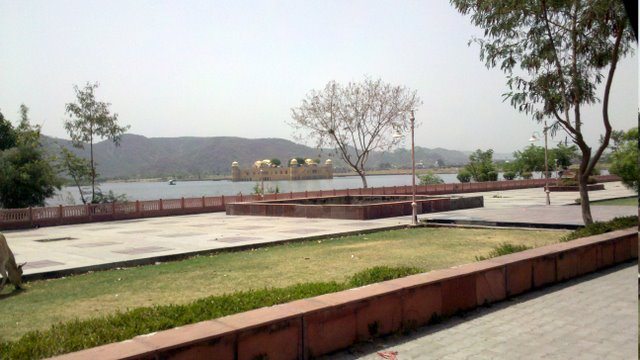 Jaipur – Udaipur: – We hit the bypass outside Jaipur at about 1.00 pm and found that we had lost about 90 minutes but decided to press on regardless. The road from Jaipur to Ajmer is excellent with six laning throughout and we could maintain a constant speed of 120 – 130 kmph. About 15 km short of Ajmer , NH 8 continues on straight to Ajmer and there is a left turn for Nasirabad on NH 79.NH 79 is part of the Golden Quadrilateral and is very good condition. We managed to keep up our speed and could comfortably reach Udaipur at 5.30 pm and were settled in our guest room in the cantonment by about 6.00 pm. We spent a relaxed evening in Udaipur meeting old friends and taking long walks. The plan for the next day was another early start so as to cover the Udaipur – Ahmedabad stretch by about 9-9.30 am.
Udaipur – Ahmedabad: – This stretch of the NH 8 is a driver’s delight with a nice six lane highway winding through gentle rolling hills and green country during the early monsoons. We started at about 6.00 am and found the road to be mildly trafficked. Maybe the truckers were taking the day off….maybe they were on strike….who knows? Anyway we made the best of it and also found that the truckers in these parts drove more responsibly with most of them sticking to the left lane and not straying into the fast lane. Maybe it is better policing in these parts….We were able to maintain a speed of around 110 -120 kmph on this stretch and this beautiful road makes one wish for a proper sports car with which to attack it ….Care to lend me a Porsche 911 or a BMW M3 or M5 anyone???I promise I will be gooood. We reached Ahmedabad at 9.10 am and were glad to make good time. 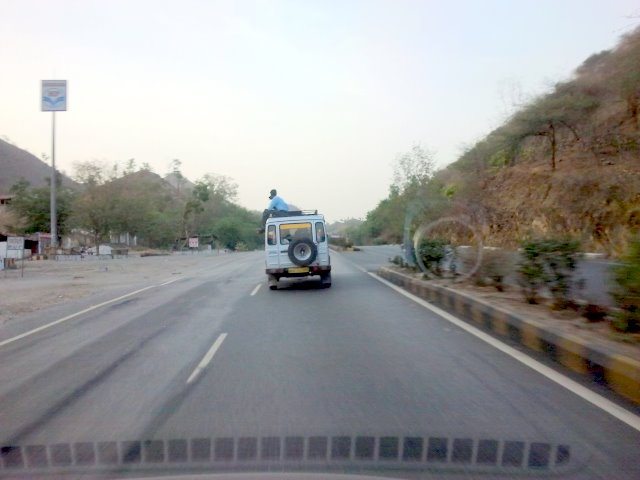 Ahmedabad – Vapi: – This part of the Golden Quadrilateral is well maintained and finally complete. The traffic is moderately heavy but reasonably well disciplined which helps you to make good time without affecting your blood pressure too much. The highway is well surfaced with mild delays when you cross the numerous towns on this stretch. The maintenance of the roads in Gujarat and Rajasthan is fantastic as I have travelled this same stretch earlier in 2006 and the roads are much better now. We had our brunch halt just after Vadodara at about 10.45 am and enjoyed a well deserved break.

Vapi- Mumbai: – This stretch can give you nightmares if you happen to hit it during the morning or evening rush hours. There are flyovers being built at all the intersections which cause frequent diversions to traffic and consequently the average speed drops way down. One also has to deal with slow moving carts, animals, dimwits and what not which force you to use colourful language ,but of course you cannot curse with children in the car, so you just sit and simmer hoping for a clear stretch of road to put your foot down. We had reached Vapi in the early afternoon and finally reached the turn off for Ghodbunder road, Thane at about 6.00 pm.

The final stretch of our journey was heralded by big thunder showers which started as soon as we made the turn off for Thane. We then ran into rush hour traffic compounded by heavy rain and flyover construction and crawled our way to the Mulund – Airoli flyover and finally reached home at around 8.30pm. It has been a satisfying journey so far and we have been blessed with good fortune in terms of relatively cooler weather, little traffic jams and no untoward incidents or vehicle breakdowns. Travelling long distances with a pet dog calls for water and exercise halts for the pet every 3 hours at least. But these halts also help us and the black beauty to take a break and also rotate driving duties between my wife and me. We are now looking forward to a relaxing two weeks in Mumbai followed by the drive back. I will keep you guys posted……till then drive safely and GODSPEED.

PS: – Well deserved thanks and Kudos to Mahindra for the Xylo, a mile muncher par excellence, Satguide for creating an excellent in car entertainment and satellite navigation system, Ghumakkar Aditya for the inspiration and being the path finder and my family for their patience and good wishes.

DELHI – NAVI MUMBAI AND BACK ……A DRIVING TALE was last modified: June 10th, 2020 by faujidoc

I am an Army doctor currently posted In Delhi.My family and i love long road trips and keep taking off regularly.