We started from Srirangapatna around 12 PM and headed towards Bylakuppe Tibetan Temple. We were hoping to have lunch on the way in Hunsur. But apart from Cafe Coorg, which was way too expensive for us, there weren’t many lunch options at Hunsur and ignoring my grumbling better half, I decided to reach Kushalnagar and have lunch. It was well past 2 PM when we reached there and had lunch at the Top-in-Town Restaurant, situated at the entrance to the town. We had Mutton Biriyani, Kerala Parottas along with Chicken gravy. The taste was just about average but our hungry stomachs didn’t complain. At around 400 bucks for two persons, the restaurant wasn’t too expensive. But there definitely must be better lunch options around Kushalnagar. We were just too late and too hungry to search around.

Taking a detour from the Highway to Madikeri, it was just a 5 km drive from Kushalnagar to Bylakuppe, the home of the second biggest Tibetan Settlement anywhere in India(the largest of course is Dharamshala in Himachal). The settlement was established on land leased by the Karnataka Govt. to accommodate the Tibetan refugees who came to India after 1959. Bylakuppe, a small town, consists of a number of agricultural settlements, monasteries, small camps in close proximity and temples in the Tibetan Buddhist traditions. The most famous among those monasteries is the Namdroling Monastery, which has become one of the biggest tourist attractions of the region.

The locals just call this place the Golden Temple. Despite the searing mid-day heat, the monastery was packed with tourists from all over India and abroad. The place is well maintained and adequate amenities have been provided for the tourists. It is a great place to spend a couple of hours on the way to or from Coorg. Here are some pictures as we entered the Tibetan Settlement. 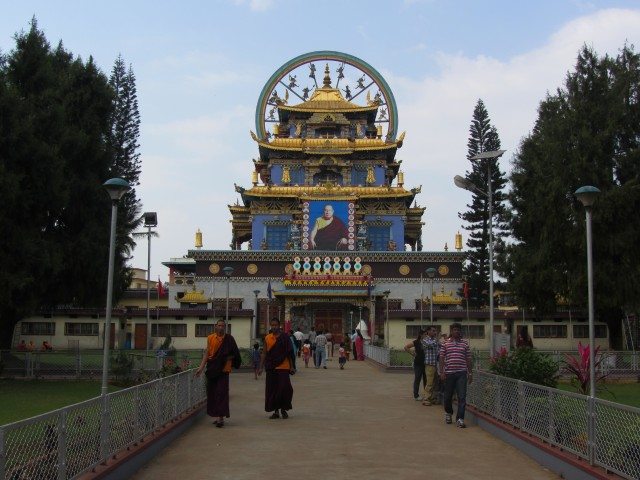 The first views as we enter the Namdroling Monastery 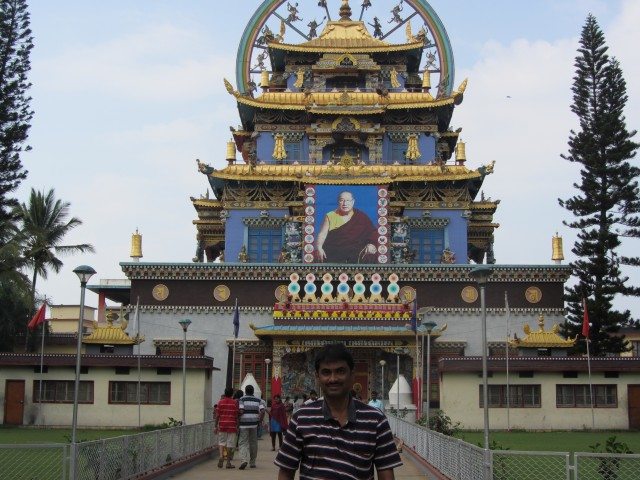 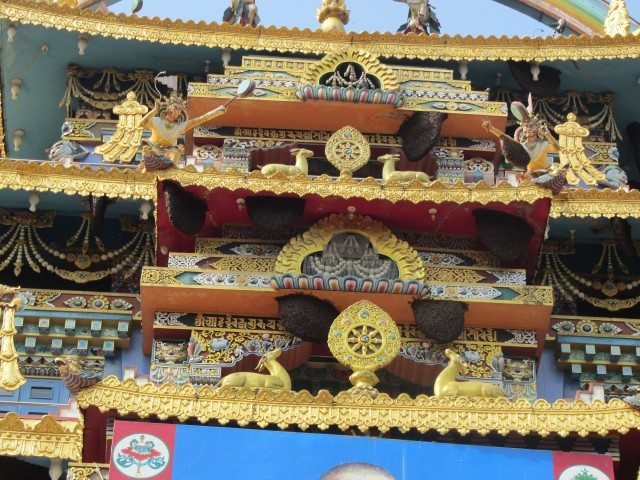 Zooming further, a glimpse of the Beehives…

As you enter the monastery campus, we witness scores of monks in their traditional red robes busy in their daily activities. This is the only part in South India, where one gets to see the sight of monks riding their motor bikes, eating in restaurants, taking mobile pictures of fellow monks and being the cynosure of all tourists. They are all immune to the attention and carry on with their daily chores. Some monks do accede to the requests of the visitors and take photographs with them.

Not all the areas of the monastery are accessible to tourists. Below is the only building in the monastery where the visitors are allowed to enter inside. 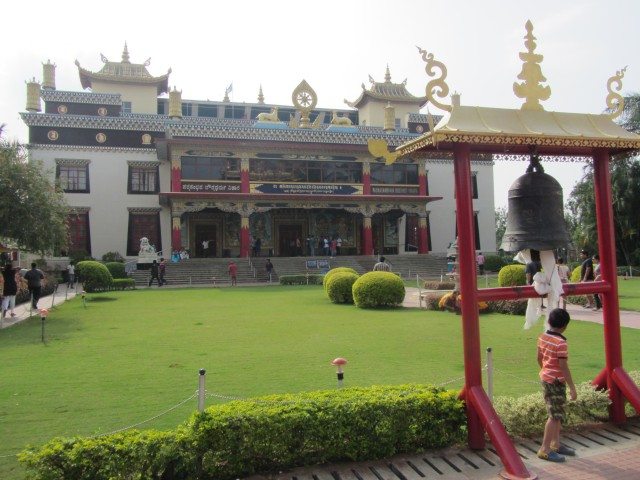 This is the only temple in which visitors are allowed

Once we enter the interior of this building, we are stunned by the view of the three magnificent Buddhist idols in the main hall. These statues are called Padmasambhava, Buddha and Amitayus. Each statue is almost 50 feet tall and majestically looks down upon us mere mortals. The walls inside the main hall are full of numerous aesthetically done paintings. Thankfully, photography is allowed inside the temple and it is a virtual free-for-all as tourists jostle to capture the stunning beauty of the place. I couldn’t escape the thought that this huge hall without any visitors should be a wonderful place to meditate peacefully for hours together. I heard from my fellow visitors, that the place is enjoyed best when the school inside the monastery is in session and the place is filled with the sounds of drums, gongs and the chanting of hundreds of young monks. Really it must be some sight for the eyes and the ears. 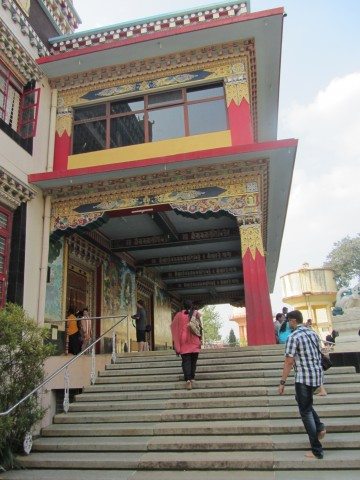 The stairs leading up to the temple 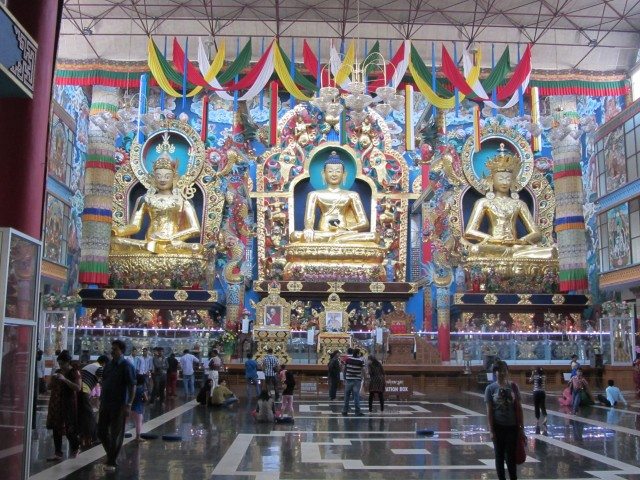 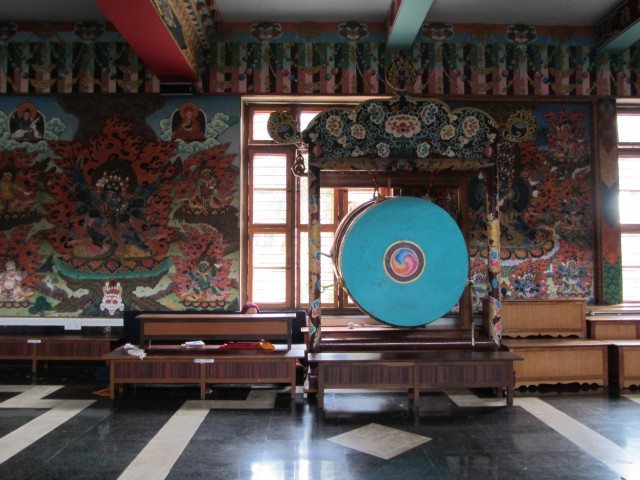 A Tibetan Drum along with the beautiful paintings adorning the walls 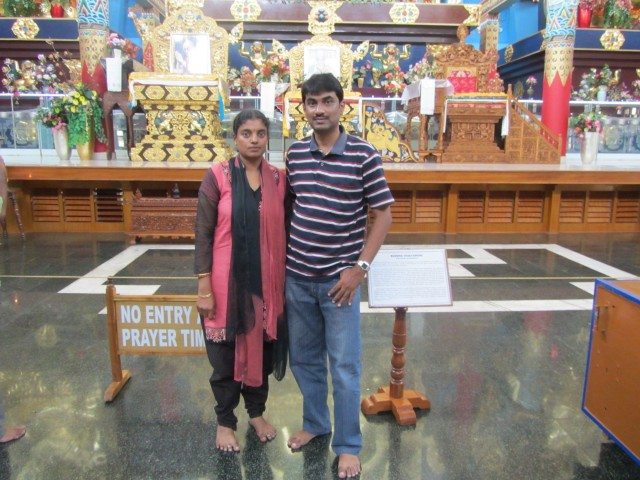 snapped in front of the idols 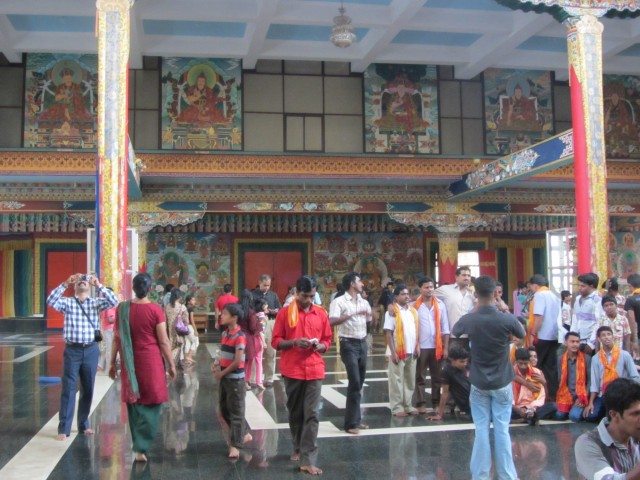 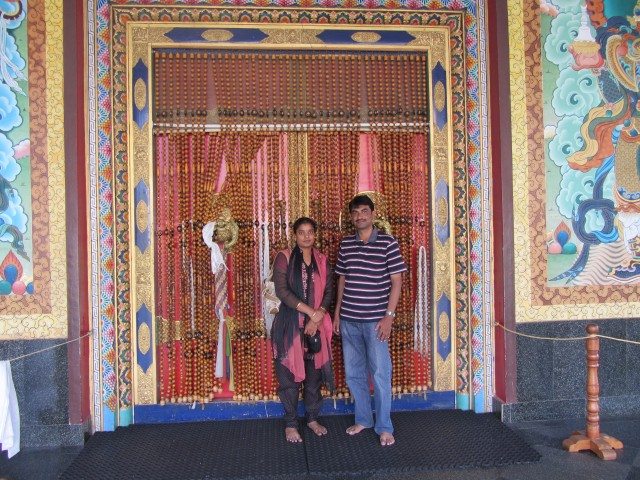 Another artful backdrop at the entrance to the main hall

After spending almost an hour inside the temple, we had a walk along the other areas of the monastery. Behind the main temple which we had just visited was a huge building with three to four floors, which looked like a school for the monks, though I wasn’t sure. Another building was like a typical college hostel, where the monks apparently stayed. The whole campus of the monastery was beautifully maintained with plenty of grassy areas for the tourist to rest and relax. 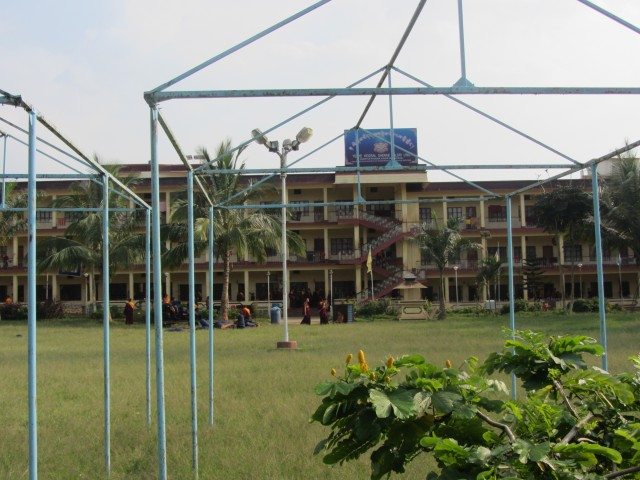 A miniature of some place in Tibet… 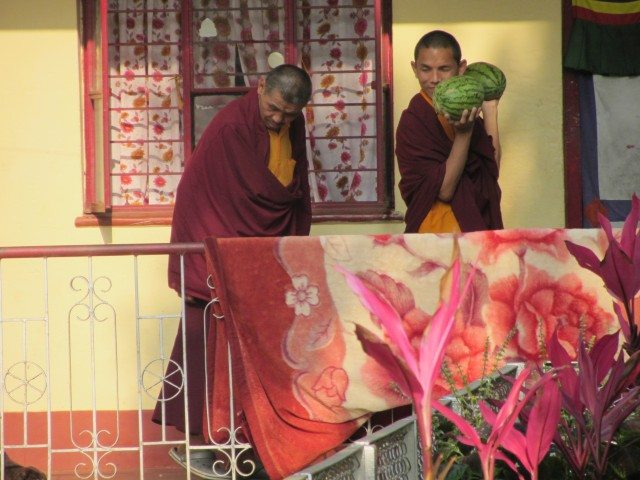 Monks in their colorful red robes

The whole experience at the Namdroling Monastery was one of peace and tranquility, a sort of a miniature version of Tibet. The hot weather was the only irritant and it would have been much more pleasant if we had reached the place around 5 PM. Also, there were many shops selling Tibetan artefacts and souvenirs. We purchased a few of them on our way out.

It was around 4 PM when we came out and since Madikeri was just 30 kms away, I was interested in visiting the nearby Harangi Dam. But the locals informed me that tourists were not allowed entry to the actual dam site and also the water level was very low because of the poor monsoons. So, a visit to the Dam looked a waste of time. Instead the locals recommended another place which was much nearer- Cauvery Nisargadhama.

Established in 1989, Nisargadhama is an island formed by the river Cauvery and is a recreation/picnic spot, 3 kms from Kushalnagar on the way to Madikeri. It is a 65 acre island with thick stretches of bamboo, sandalwood and teak trees and surrounded by the Cauvery river. We reached the place in 20 minutes from Bylakuppe. An entrance fee of Rs.10 per head is charged and we entered the Island through a Hanging Bridge constructed over the river. As expected the place was packed with tourists. 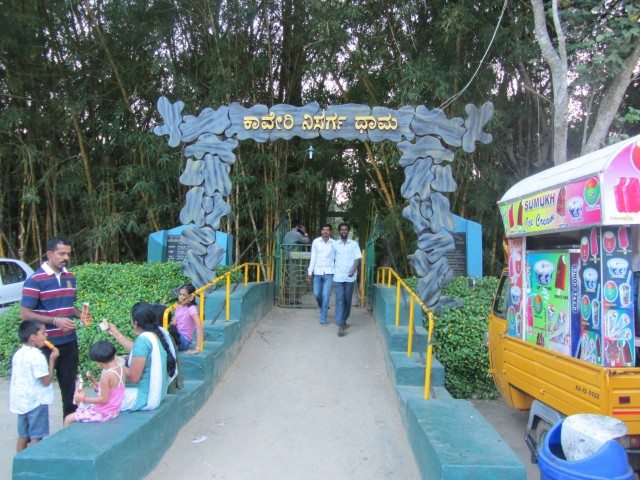 Hanging Bridge over River Cauvery at the entrance 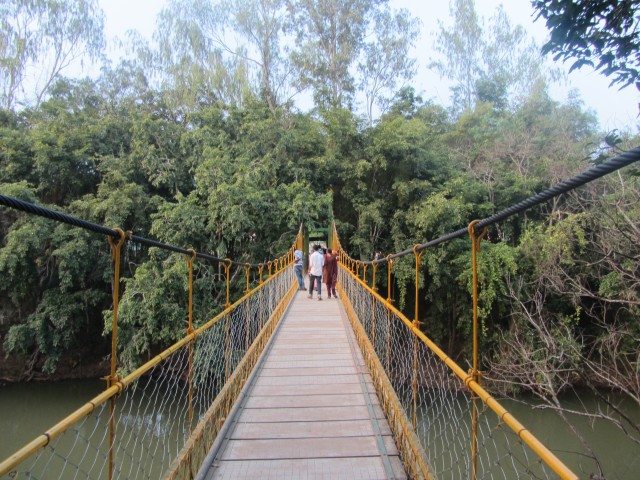 View of the bridge from the other side

As we enter the place, we are greeted with a sort of a mini-zoo, where we find deers, rabbits and peacocks kept in small enclosures. There was a big crowd of children screaming in delight having a close look at the rabbits. As we go further into the island, we found a children’s playground. There are also facilities for boating and elephant rides. The latter was packed with tourists awaiting their turn patiently. 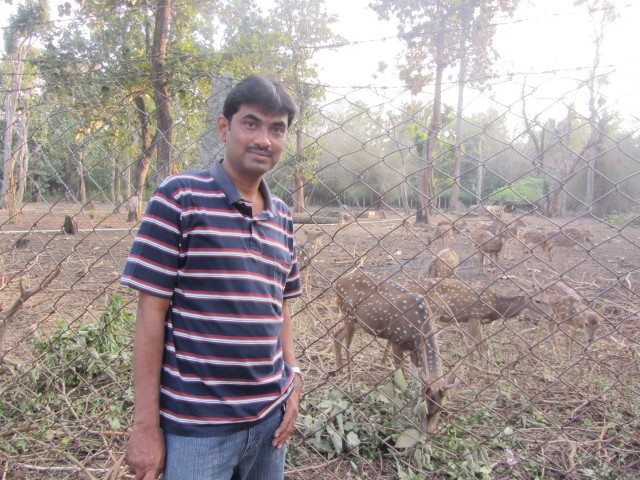 The deer park inside the island 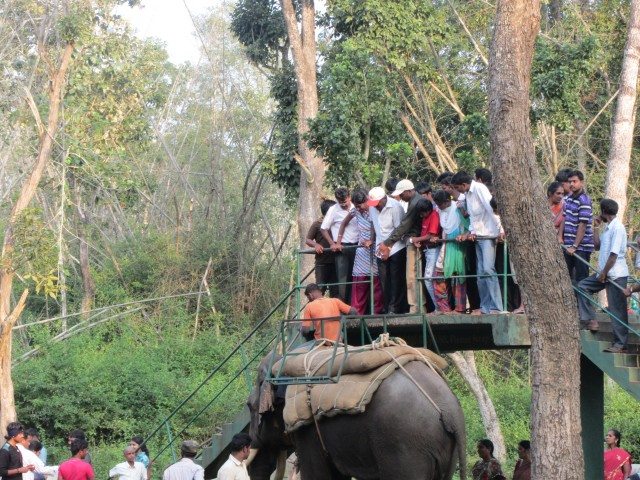 The hordes waiting for the Elephant ride 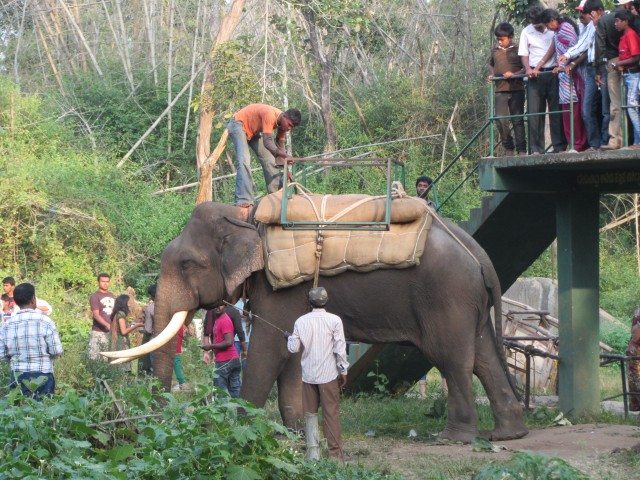 The ride about to start

The place has a guest house and treetop cottages run by the Forest Dept. I heard from the regular visitors to the place that tourists were allowed to enter into the river at certain safe and shallow points to enjoy themselves under the watch of the guards. But I found all those entry points locked and out-of-bounds for tourists. The guards at the place said that this was a precautionary step to avoid any mishaps because of flash floods which were possible sometimes in January. He also added that in March and April, there was no restrictions for tourists to enter the river. I wondered how much water will be there in the river then !

The entry points to the river, temporarily closed down

We were totally exhausted by the time we returned back to the entrance . Thankfully there was a small restaurant near the entrance where we had some tasty snacks and tea. We were relieved to get into our car for the uphill drive towards Madikeri. As the roads twisted and turned and my wife slept her way through the 25 km ride, I enjoyed the drastic change in the terrain and the greenery and the chilly weather it brought along. Listening to lilting Illayaraja classics from my music player, we reached Madikeri town and checked into Hotel Chitra, in the heart of the town. We went out and had a light dinner at nearby Neel Sagar Restaurant. It had been a long day and we hit the bed for some much needed sleep. It was just 8 PM.

COORGI DELIGHTS-GOLDEN TEMPLE AND NISARGADHAMA was last modified: May 26th, 2021 by Venkat