The Oxford Dictionary defines “Fresco” as a noun which describes it as “a painting done rapidly in water colour on wet plaster on a wall or ceiling, so that the colours penetrate the plaster and become fixed as it dries.”. Myself, being a generalist commoner, had no first-hand idea about the actual expanse of such paintings in Nawalgarh. So, initially it struck me with awe and sense of disbelief. There might be more than 200 buildings with fresco painted walls with approximately 5000-6000 picture frames. A complete research may take about three to four months of minute observation, data collection and for capturing pictures of those artistic and colourful designs painted on the walls. Not only that I always wanted to know about the frescos and its technique in general, but was also curious to know the about specific frescos that are liked by the foreigners, especially Europeans.

It is said that the technique was pioneered in the contemporary Italy. During hey days of Mughals, the same was transported to the Mughal courts. Later, due to proximity with the Mughals, the technique found its way to the domain of Jaipur royalty. Thereafter, the technique was copied by the Shekhawati Rajputs, who belonged to the same clan, that of Jaipur royals. But it was the rich Marwari merchants, who actually utilized the technique at a mass scale and got all their mansions profusely painted over the external and internal walls. It is the general belief that they chose to enrich their mansions with artistically painted beautiful walls as a sign of their social status because they could not build forts, which was the exclusive to the ruling clans clad with the responsibilities of protecting its citizens.

In medieval period, the inhabitation in Shekhawati was in the form of walled cities having gates at different directions. The role of the ruling royalty was to give protection to the citizen living under their dominions. Similarly, the role of the business families was to trade and pay taxes to the royalty for the maintenance and protection of the cities. However, the administrative structure was changing fast. The battle of Plassey in 1757 AD had informed the arrival of a new foreign power, which completed its course in 1857, when the first war of Indian Independence was fought. For another 75 years or so, the influence of the British powers remained in the territory till 1947, when the country became independent. Those frescos indicate the entire process of socialization in the 18th and 19th century Shekhawati. 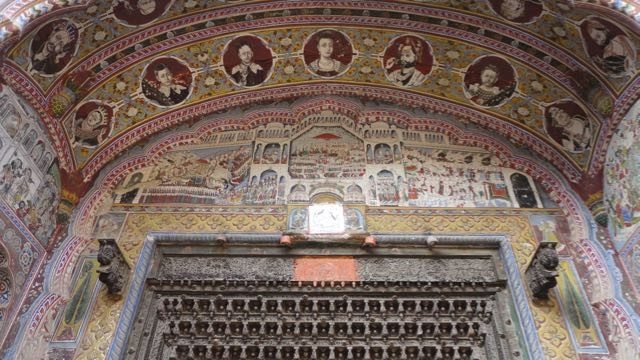 Portraits of Indian and Europeans at a gate

Though the history, logic and reasons behind each portrait on so many walls in the city can never be truly found, the pictures across layers of time suggest the role of administrators in the lives of those merchants. The early frescos had the portraits of Indian rulers and their life-styles and later frescos had European influence. Equally, the role of those merchants in the transition of administration should be another interesting study had it ever been attempted. Anyway, having felt so, I was curious to know about the persons who actually painted at such a large scale. Our guide informed us that those fresco painters were called “Chiteras (चितेरा)” and belonged to the caste of kumhars or potters. They were also called “Chejaras (चेजारा)” or masons since they worked both as painters and builders. They resided at Khandela village near Nawalgarh. 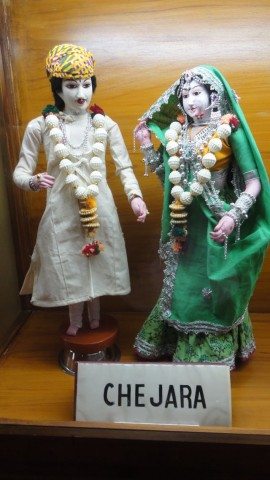 I do not know what the modern generations of Chiteras and Chijaras are doing. Do they feel proud in the work mastered by their forefathers? Or, are they surviving on meagre assignments and waiting for reservation in the government jobs? Anyway, our guide also informed the process of building mansions in Nawalgarh. As per his versions, all local produce were used to build mansions there. The building materials were brought from a village called “Neem-ka-thana”. Stones were used in the pilings, followed by bricks to build the walls. Limestones were also used in the upper layers. Powdered clamshell/conchshell were used to make the plaster material along with natural home-made spices like molasses and fenugreek. The plasters were smoothened with the help of a special stone called “पनिया पत्थर”. 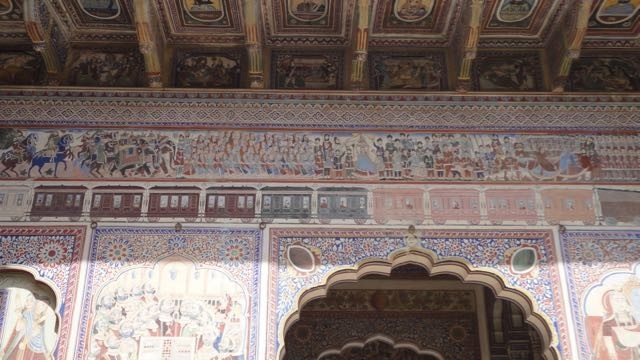 Gan-gaur festival and the train

Initially, we went to Jaipuria haveli to see the fresco painted with the technique called “fresco-secco (गीला-आला पद्धति)”, where “geela” is attributed to plaster and “aala” is to painting. It means that the painting is done after the plaster work is over and is dried. Though such paintings can be modified at a later stage too, the effect of the colour does not last long. Somehow, we didn’t feel nicely to this technique as the colours were not so vibrant and the effect was not striking. But, this might reflect on the mindset of the merchant, who used this technique. He might have thought to keep the pictures on his walls changing at some time interval. 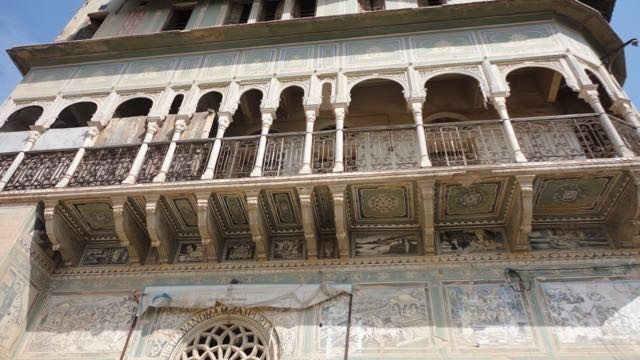 The most prevalent technique used in Nawalgarh was called “Fresco-bono (गीला-आला पद्धति)”, where “geela” is related to plaster and “aala” is to painting. In this method, colours are mixed with lime and water and painted on the wall while plaster is still wet, which increases the stability of the paintings. In order to do such paintings, the chiteras first used to sketch the pictures on the wet plaster (रेखा-कर्म) and then to fill it with colours made of different natural products (वर्ण-व्यास). When the plaster dried up, the colours were carbonized with the help of the lime and got fastened permanently to the plaster.
Chiteras usually drew pictures from their sheer imagination of faces and events. I wonder with awe towards the capacity of the painter who painted the first lot of pictures on the walls. These painters might have become the master trainers and their original set of paintings as the training materials for the next lots that thrived for at least four to six generations. 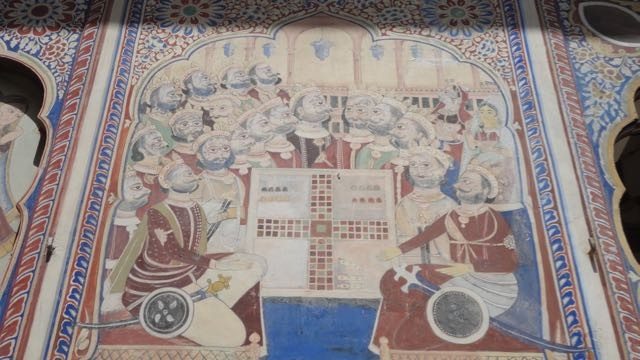 They drew many scenes from the social lives, created scenes of the stories from the religious scriptures, made beautiful pictures of plants, flowers, animals and birds, sketched the images of contemporary technical inventions and celebrated festivals with the help of their brushes. Trains and ships, painted about 125 years ago, draw many visitors from foreign countries. But, I am certain that these pictures were drawn to display such piece of industrial advancement to the general public as the enhanced social status of the merchants, who might have travelled or at least seen such an items.

A train on the wall 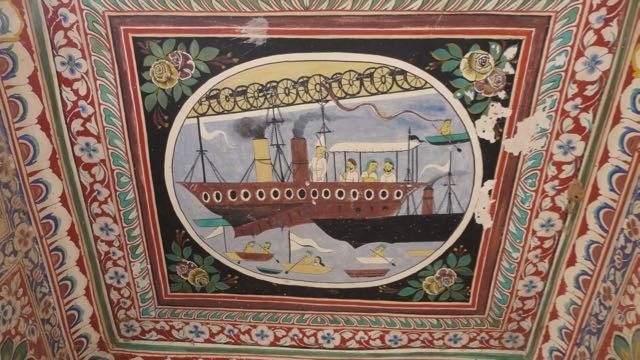 A ship on the wall

The common European travellers relish the pictures of a European man or a woman drawn here. I think it is mainly because they can relate themselves with it. Some of them might also relate these pictures with the colonial past of the country as well. But, our guide had another plausible explanation for these. According to him, with the dwindling fortunes of the ruling class, their resources got dried up. Unable to maintain their lifestyle as well as the responsibilities cast upon them, some of them might have resorted to forcefully withdrawing money from the merchants, who were residing in their cities. When such an act became unbearable and frequent, the merchants turned towards the British administrators for seeking protection. Therefore, the presence of some of those pictures with a British woman or a man might be attributed to displaying their obeisance towards the administrators. 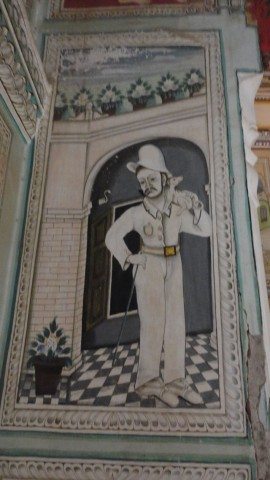 To my Indian eyes, however, the best scene was from Krishna Leela (कृष्ण लीला), which I saw in the Poddar’s Haveli. Though the story of eternal love between Krishna and Radha is well-known, its graphical display was the pure manifestation of absolute surrender in love, with or without spirituality. The first scene was that of “Playing of games”, in which Krishna, coming from behind had closed the eyes of Radha and enquired about the identity of the person. It is a common game of “Hide-and-seek” variant generally played by children. In this picture, Krishna is depicted in blue colour and Radha is in light pale yellow. Let me term this picture as “कृष्ण क्रीडा”.

On the second wall, there was the next scene in which the Krishna has looked into the face of Radha and had brought her into his fold. The Picture can be termed as “मुख दर्शनम”. The artist had drawn the flowering trees to show the onset of the spring season, which is also called the season of love. In this picture also, the colour scheme of the Krishna and Radha is same. 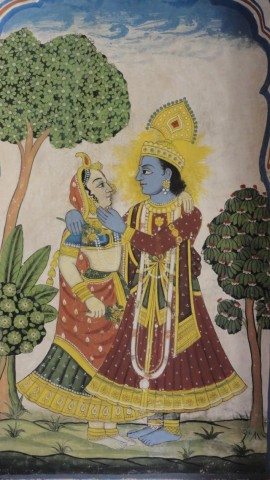 In the next picture on the adjoining wall, Lord Krishna was showing full moon to his eternal consort, Radha. It can be termed as “चन्द्र दर्शनम्”. The colour scheme of both of them is still retained.

On the adjoining wall, Lord Krishna and Radha, both were seen as holding flowers as if they were walking in a garden. It can be termed as “वाटिका भ्रमणं”. 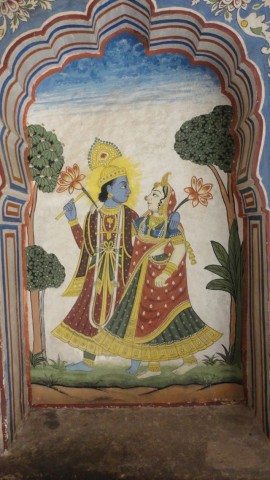 Then came the rainy season in which Lord Krishna and Radha both were shown together under an umbrella. It can be termed as “छत्र धारणम”. In this picture also, the Krishna is shown in blue and the Radha is in pale yellow. 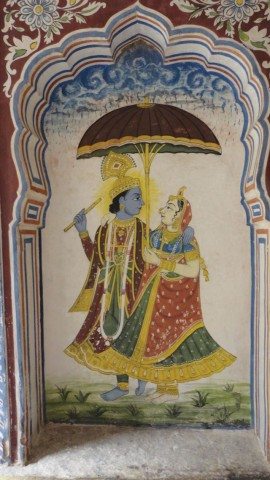 The last picture is a scene at night. Lord Krishna had taken his consort completely in his folds. Their love is so great that their Radha has taken over the colour of Lord Krishna and vice versa. What should I term this picture as? For the limitation of words, I term it as “समर्पनम”. 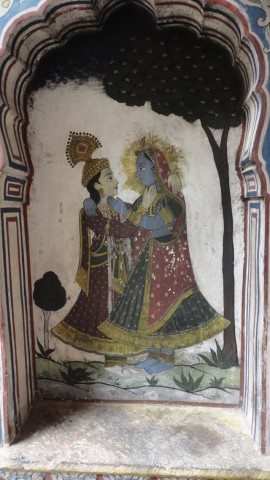 The above picture-story has been etched in my memory for ever. There were, however, many other stories etched on walls, columns, jharokhas, ceilings etc. I felt as if I were in a treasure hunt where there was no passwords, codes, secrets etc. It was omnipresent; one just had to look deeply to understand the concept. However, as the time was running out, we concentrated upon the museums at Poddar’s haveli, which was the next best thing to do at Nawalgarh.