Since time immemorial, travelling for food remains one of the prime reasons for man’s need for displacement. We can safely say that theentire tour and travel industry has grown from of the first step taken by a pre-historic man in search of his food. Even today, the first need for any journey undertaken by men around the world, arise from their apparent need for food. Subsequently, when modern man started travelling to different regions just to taste their respective local delicacies, we coined the term as “Food Tourism” or “Culinary Tourism”. This was exactly in our minds when we decided to visit Shekhawati. During our stay in the region, we found that the most ostentatious congregation of street food vendors was in front of Rani Sati temple campus at Jhunjhunu.

Some vendors were selling “कुल्फी” (Kulfi, an Indian ice cream). It is made of thickened milk, sweetened with sugar and garnished with dry fruits and saffron. For making a kulfi, the mix is filled in the iron/steel containers and frozen with the help of ice-salt mix, kept inside an earthen pot. When properly made, it tastes divine. One can make different flavours of Kulfi by adding different types of dry fruits and condiments to the thickened milk. But, it is difficult to say that Kulfi originated in Shekhawati. In all probability, it was a dish made in the Mughal courts. From there, it had spread all over the country.

Just like Kulfi, there was another famous dish of Indian ice cream genre. It is called “चुस्की” (An ice based dessert). Apparently, it is an all-time favourite of children and women of all age groups. It is made of finely crushed iceflavoured with sugar syrups of different colours. By changing the colour and flavour of sugar syrup, one can produce different varieties of chuski. But, it is very difficult to attribute the origin of this dessert to Shekhawati. Similar to Kulfi, it has also spread far and wide in the country and is available everywhere. 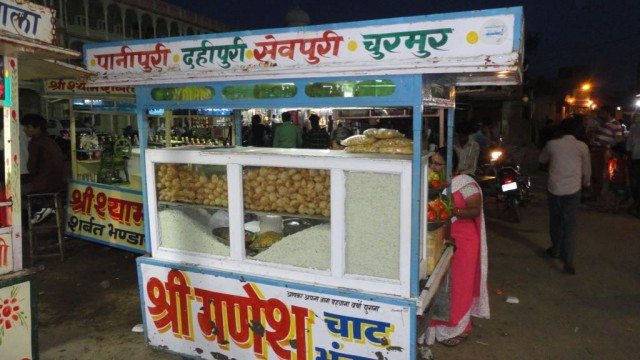 The all-India favourite dish called “पानीपूरी” (a flatbread filled with water) was also prevalent in Shekhawati. It has retained its charm over the masses because of its tangy taste and mouth-watering recipe. Many a times, this street food had to face the wrath of the puritans, who often rake up the demerits of eating this dish by propagating fear of eating contaminated water and all. Still, it has survived. Many business houses are packaging and selling readymade flatbreads and its filling so as to enable people make it at their respective homes. The flatbread, when fried in oil, becomes crispy and swollen. The filling-mix is made of potato, tamarind paste, pulses and onions. The water is prepared by mixing it with salt, pepper, lemon, cumin and coriander. But, like others, it is also not possible to trace its origin to Shekhawati, though it is a famous locally available street food.

The collection of street-food is not completed without mentioning the snack dish called “चाट” (A sweet-sour vegetarian mix). It can be made either with potato base or with pulses base. Curd, tamarind and coriander leaves are often the main constituents of this dish. The Chaat-stalls do sell other fried snacks, eg. “कचौरी (Kachori)” and “समोसा (Samosa)”. Sometimes, two variants of chaat can be prepared by adding the kachori and samosa in the chaat mix. Due to cultural diffusion over many centuries, it is really difficult to find out the origin of those exotic dishes. But, such diffusion has created many versions of chaat, which differ in their uses of spices, condiments and also differ in their respective preparation styles.

Besides the dishes described above, there were fried potatoes, fried cauliflowers, fried green grams etc. In this era of globalization, all those regular snacks items are available in every city in the country, which makes it really difficult to define the term “local cuisine”. 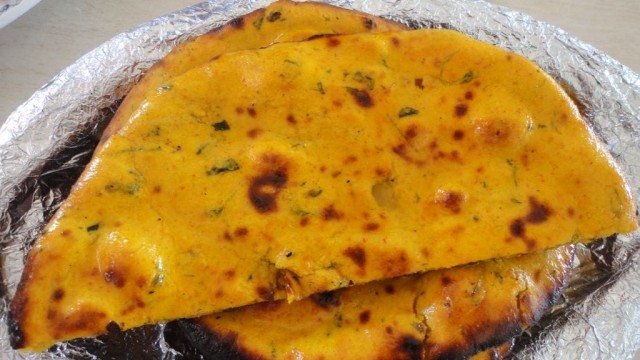 Some say that the term “Local Cuisine” includes all kinds of dishes cooked locally by locals and some say that it also has the ingredients grown locally and cooked in the local styles developed over the generations. “बेसन की रोटी” (the chapatti made with gram flour) is another dish reportedly associated with this region. Churu and Jhunjhunu districts of Shekhawati are major producers of gram due to their conducive climatic conditions. Easy availability of gram flour and relative ease of cooking such chapattis has apparently made it famous. With the right proportions of salt, spices and flour, these chapattis taste divine. 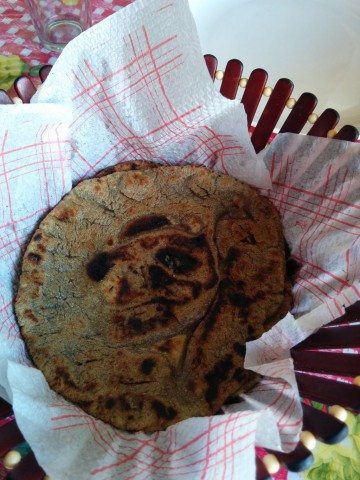 Another tasty preparation is called “बाजरे की रोटी” (chapattis made with millet flour)”. The Shekhawati region, having dry climate with less rainfall, is much suited to the production of millet. Its flour is relatively coarse. Due to its granularity, it is primarily rolled with hands and is cooked on the charcoal burner. With generous amount of butter, it also tastes awesome. Generally, it is eaten with pulses. 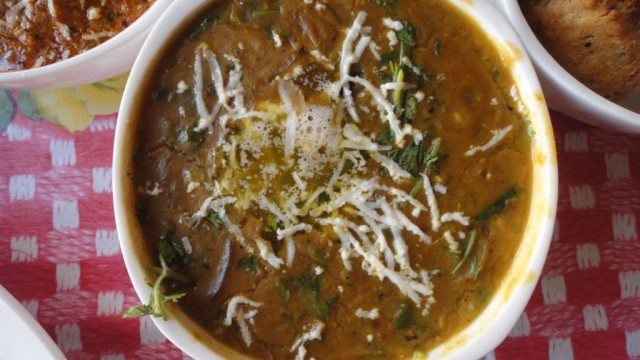 Almost all varieties of pulses are very much available in Shekhawati. Their abundance has helped in development of many dishes just by mixing their respective proportions. One can have a plain dish made of single grains or can prepare a dish made with mixed grains. Differently used spices give Shekhawati pulses as tangy and delectable taste. I observed that they did not use butter in as much quantity as it is used in Punjabi style. Still, pulses are the major source of the “Shekhawati cuisine”, which is made famous by its “दाल-बाटी-चूरमा” (a combination of pulses-wheat flour balls-coarsely ground gram/wheat flour). 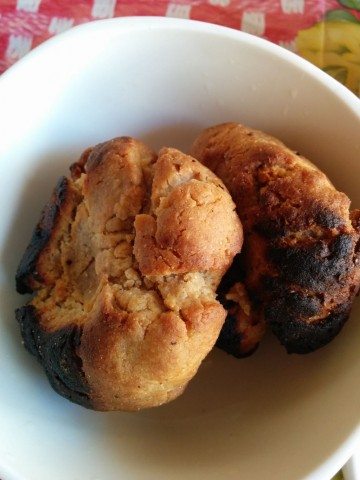 The Baati (बाटी) is essentially made of wheat flour and semolina. The dough-balls are cooked in the boiling water and later baked on fire to get an even consistency. One can also prepare baatis by deep frying the dough-balls in hot oil. While eating, the baatis are often broken and dipped into butter. Those who are familiar with a Bihari dish called “ठेकुआ” (Sweetened wheat based local delicacy), may compare its preparation with Rajasthani Baati, except that the baatis are not sweet.

The Baati is of course salty, but “चूरमा” (Sweetened ground wheat flour) is sweet. Actually, churma is a side-product of baati. Before adding salt to the dough-balls, a part of the dough is set aside for preparation of churma. Some sugar or jiggery is added to the dough. After adding the sugar, it is cooked in the manner similar to baatis. Once the dough-balls are cooked, they are ground with hands to make into a coarsely ground powder. If prepared finely, it also tastes superb.

Besides above special dishes of Shekhawati, we could also have “राजस्थानी कढ़ी”’, “गट्टे की सब्जी” and “पनीर की सब्जी (राजस्थानी स्टाइल)” during our stay at Shekhawati. The local food, as we may say, is available all over the country. But, to have them in their own locality was an experience, which is called “food tourism”. 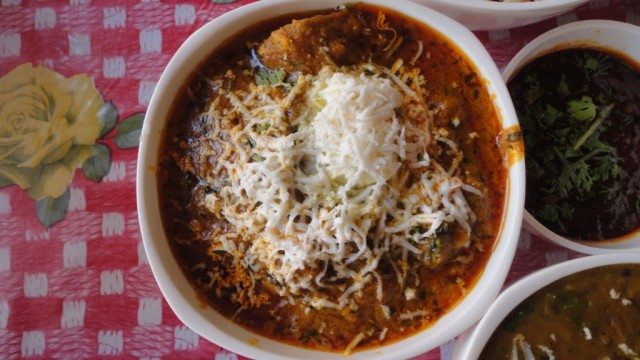 In the end, I must admit that the food connoisseurs may find many other dishes specially attributed to Shekhawati. But for those, who wish to enjoy local food of Shekhawati, I will suggest Nawalgarh as best location. There, many experienced guides have established their own restaurants for catering to such travelers looking for local food. For Street food, I will suggest Jhunjhunu.

In August I visited Kolkata along with my parents. Our schedule was just full of meeting friends and relatives. We had just one day…