Jhunjhunu was our first stop in Shekhawati. Besides the Lac bangles and the temple of Rani Sati, we also went to see various other monuments situated in this city. The fist of such monuments was the recently-built “Statue of Jhujhar Singh Nehra”, a Jat chieftain, who is given the credit of being the founder of the town. It was situated in a small park near the District administration buildings. The gate of the park was locked. So, we could not go inside and had to content ourselves with a pictures taken from outside. 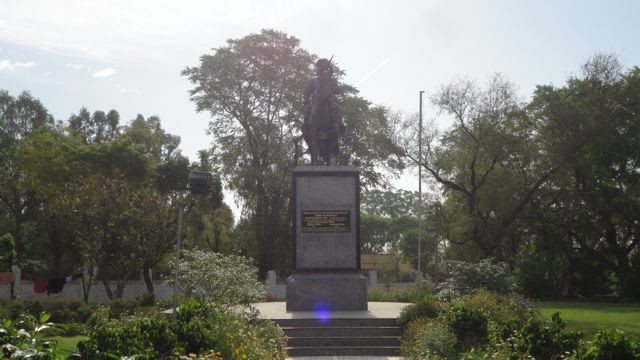 Anyway, the second monument that we visited was the “Khetri Mahal”, which is said to be built by Raja of Khetri in 1770 AD. It was situated in the narrow bylanes of Kaziwada Muhalla in Jhunjhunu. The Khetri Mahal is considered as precursor to “Palace of Winds” in Jaipur, which was built later in 1799 AD. During its hey days, it must have been highly decorated with frescos paintings etc. But, presently it was in a neglected state. A boy’s hostel, named “Kayamkhani Hostel” was running near its premises and its internal courtyard had become the volleyball court for the boys. 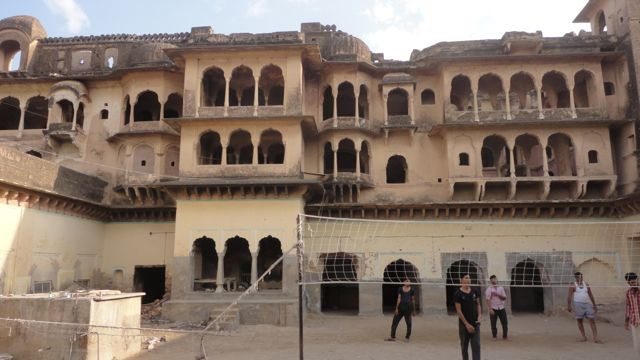 From Khetri Mahal we went to see the third monuments of this city. It was the “Dargah of a Sufi mystic Hazrat Qumuruddin Shah”. He was born in 1780 AD and lived upto 1857 AD. The dargah was majestic. It was situated at the foothills of a nearby hill and could be approached through an inclined pathway made of chiseled stoned. The pathway leads to a big gate with high central arch. It had many jharokhas on either side of the arch. This gate is known as “Buland Darwaza”. Inside there was a big courtyard where the dargah was situated. On the farthest end of the courtyard, there was a mosque also.

Very little is available about the life of the sufi mystic. The information painted on the wall informed that he was married to a woman from nearby village and a girl was born of that wedlock. The girl child died quite early. Thereafter, he opted to join a service. At first, he got a job with the Nawabs of Tonk. Later, he did service in the kingdom of Bissau. During the service, his interest in the spiritual growth arose. With his spiritual master, he travelled to all the dargahs of his time. Finally, he chose Jhunjhunu as his abode. 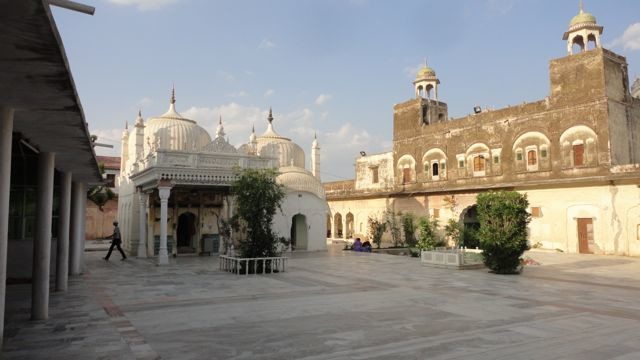 The courtyard and the dargah

Somewhere, on the way, we saw the “Shekhawati well”. It had four minarets erected on the four corners of the raised platform around the well. The well had dried up and was not in use anymore. It is said that in good old days, when the locality was not so congested with high rises and with plenty of construction, such minarets possibly could be used to easily identify and locate the wells. The wells also played a part in the social interactions. People used to pass on the information when they gathered around it. It played a prominent part on the occasion of Dhola-Maru festival, when the procession used to start from the residence of the headman of the locality and terminated at the well. 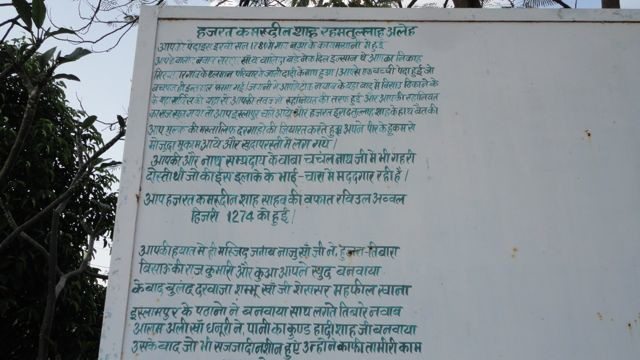 The details of the Dargah

Later, during my stay in Shekhawati region, I saw many varieties of such wells. Some had two minarets and some had four. Some had chhatris alongside the minarets. Some were also having fresco painting on its walls. Who funded their construction during those days, especially in the open public places? In my opinion, some might have constructed those wells to attract the footfalls to their respective business as well. The grandeur of those Shekhawati Wells in their heydays, however, can now only be imagined as a part of the folklore.

Our auto-wallah took us to “Mertani Bawri”. If Shekhwati well is considered as the fourth monument, then the bawari was the fifth one. The notice board placed in front of the Bawri informed that it was built by the queen of the then King Shardul Singh Shekhawat in 1783 AD. It was more than 100 feet deep and had hundreds of steps alongwith lots of chambers, windows and verandah, where weary traveller could have rested and take respite from the summer heat. 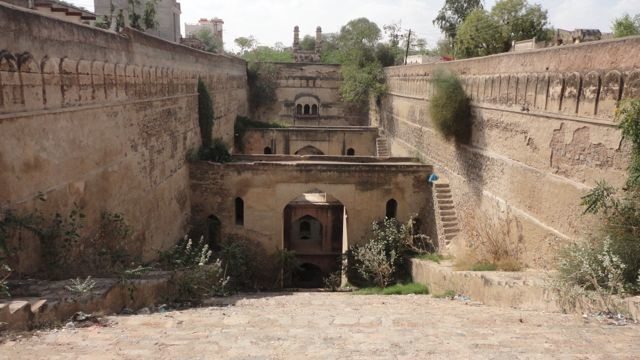 The signboard at the site also glorified the stepwell by indicating that its water had the magical properties of curing the skin ailments. But, presently, it was dried up and highly dirty. It seemed to me that its lonely and deserted chambers had become the ground for the unsocial elements to pass time and think of another mischief. 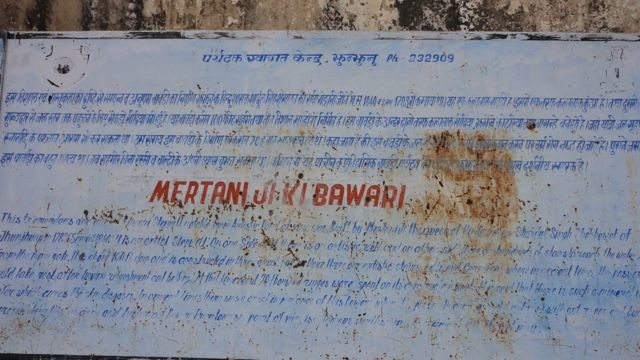 The details of Mertani Bawri 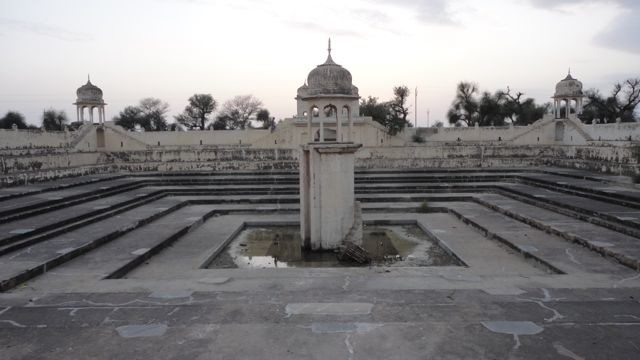 However, after looking at those water harvesting facilities, in the state of complete dryness, many questions came to mind. How could these rain-based systems fail, when the rain-pattern remains same? Did they lose their social relevance in the time of water-pipe-tap systems and ultimately gone into disuse? Why can’t the present generation revive those old wells, step wells and Johara in order to solve the impending water crisis affecting the lives of the citizen? 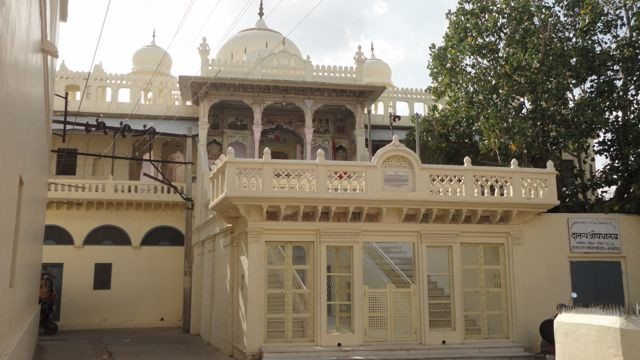 The sixth monument was the “Lakshmi Nathji temple”. It is very beautiful with its extremely exquisite fresco painted walls. The inner-most chamber of the Lord was closed at the time of our visit. The temple had maintained a very strict discipline of its opening-closing timings. When we requested the caretaker to open the gate of the main sanctum sanctorum, he gently and proudly rejected our pleas, saying that the gates have never been opened for any dignitaries. Even District Magistrate had to wait for the appropriate time to be able to pray before the main deity. 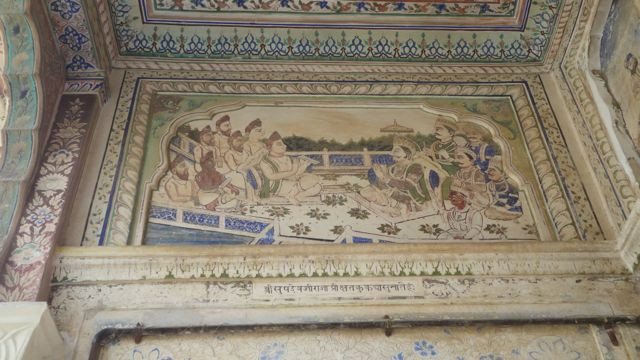 The temple is situated near Khetan Haveli. It is said that the Khetan family is the main patron of this temple. The Havelis with fresco painting are another hallmark of the Shekhawati Region. In Jhunjhunu itself many such Havelis exist, namely Tibberwal’s havelis, Modi haveli etc. Since, we had to visit many more cities in Shekhawati, where we were to get the opportunity to see the havelis, we decided to skip the havelis at Jhunjhunu.

We also visited the Mansa Devi Temple, which was situated on the small hillock. The temple was closed at that time. However, the priest resides nearby. He opened it for a newly-wed couple, who had come there along with their new-born child.to seek blessings of the Goddess. So, we were also fortunate to have a darshan there.

There were some more monuments in Jhunjhunu, which pertained to British period. We skipped them so as to concentrate upon the manufacturing process of Lac bangles and to see the Temple dedicated to Sati.

In my opinion, the city might has fallen off the tourist map these days, but it is a treasure trove for observing the cultural intermingling of traditions of Kachhwaha Shekhwati Rajputs, history of business families and also the tradition of Kayamkhani Muslims. Those, who derive pleasure from pursuits of diversity in Indian culture, may find many opportunities in Jhunjhunu.

As for myself, due to time constraints, I could only observe the tradition of worshipping sati, about which I have already written in details. If ever I visit Jhunjhunu again, it will be for observing the Kayamkhani Traditions. Presently, it was time to go to another city, i.e., Nawalgarh in Shekhawati