I planned for a day trip to Chandraketugarh for a tryst with the ancient history of Bengal. Me and my friend reached Sealdah station at around 11 am in the morning. We boarded the Basirhat local scheduled at 11:15 hours. We crossed Barasat and further towards Hasnabad. Finally at around 12:40 we got down at Harua road railway station. From station we boarded an auto rickshaw/minidoor ( Bus and motor van also available ) and after about 15 minutes reached Berachampa bus stand.

When king Chandraketu was ruling the kingdom, a Pir named Gorachand arrived from Arab and tried to convince the king to convert his religion to Islam. During that time, he showed several magical tricks. One of the tricks was that he bloomed Champa flower during off season on the Bera (fence). From that time, the place is called Berachampa.

Just 100 metre walking straight from Berachampa bus stand , we reached the Khana Mihirer dhipi. Archaeological Survey of India has bounded the region with boundary but still no care has been taken. It has become a public park for local love birds. Such a pity for a valuable site. It was first excavated by Ashutosh Museum authorities from Kolkata. 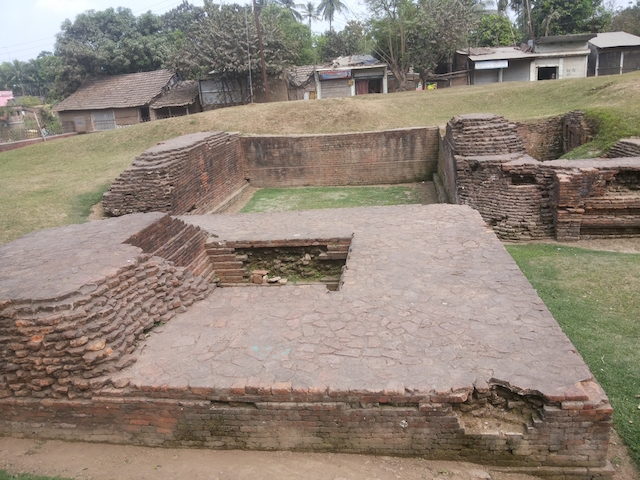 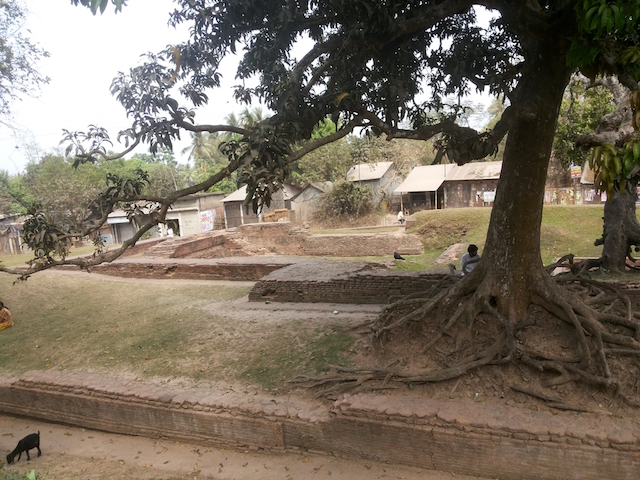 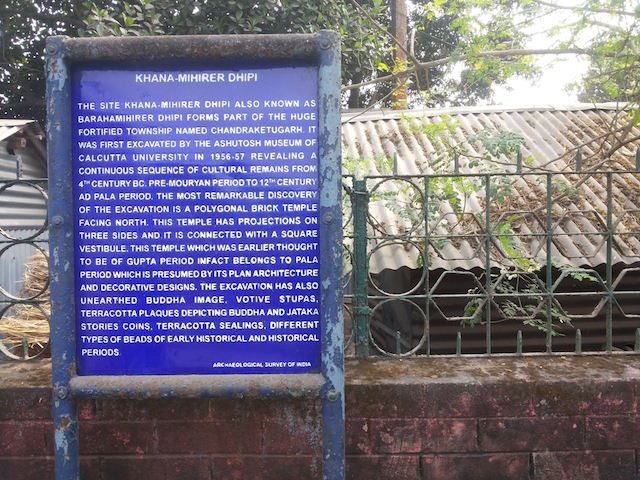 ASI Board mentioning about the historical significance of the place 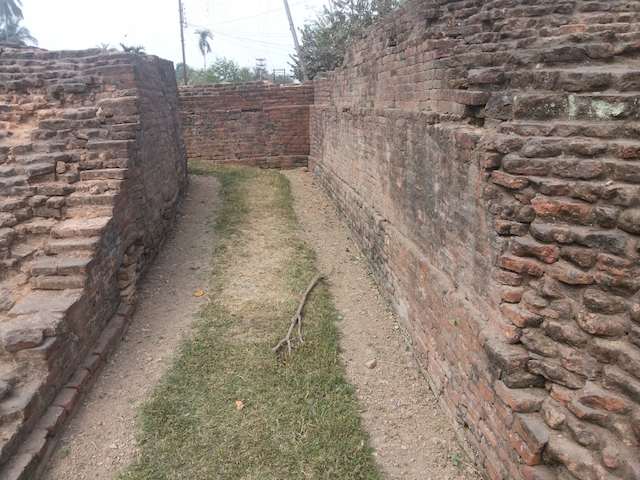 Astrologer Khana and her husband Mihir used to live in this place. It is almost 2000 years old during the time of Gupta period. This mound was once a dense forest. Local people called it “Damdama”. Seals and coins having signs of ships, copper made Durga statue, Budhha , Vishnu , Aries ,Taurus horoscope symbols , and several gemstones have been found from this place. But now locality and shops have been grown all over the place. If proper excavation can be done in all those occupied lands, you can get another Nalanda like archaeological site. There used to be two ponds beside the temple like structure which local used to call ” Amrit Kund ” and ” Jivat Kund “. The water of these reservoirs is said to have healing powers. 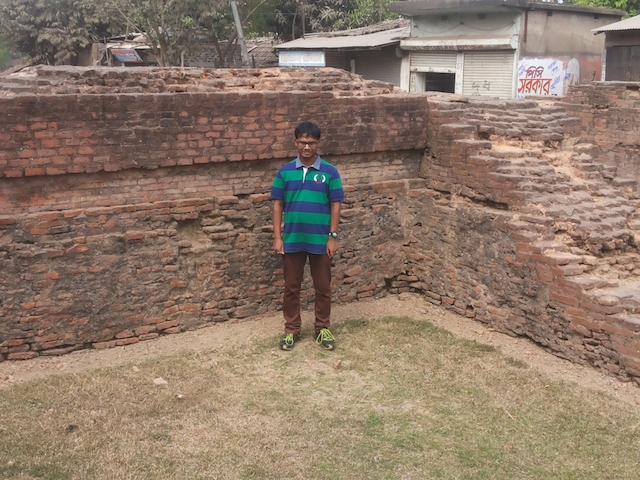 Me standing inside one of the excavated site

Our next stop was Dilip Kumar Maite’s collection. His house is just to the left of Berachampa Bus stand. He is a revered person in the locality and almost 75 years of age. He spent the entire lifetime on researching about the history of Chandraketugarh and the betterment of the place. 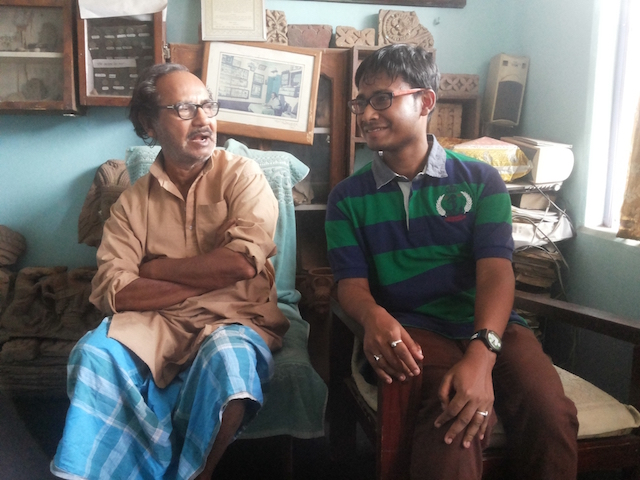 Myself with Dilip Kumar Maite, expert on Chandraketugarh at his residence

He wrote several books on Chandraketugarh and I myself bought two books. A visit to Chandraketugarh is incomplete without viewing his personal collection much of which he donated to Ashutosh Museum in College street of Kolkata. No one knows better about Chandraketugarh than this person. He met several dignitaries like Rakhaldas Bandopadhyay of Mohenjodaro Harappa fame. He himself is a historian. 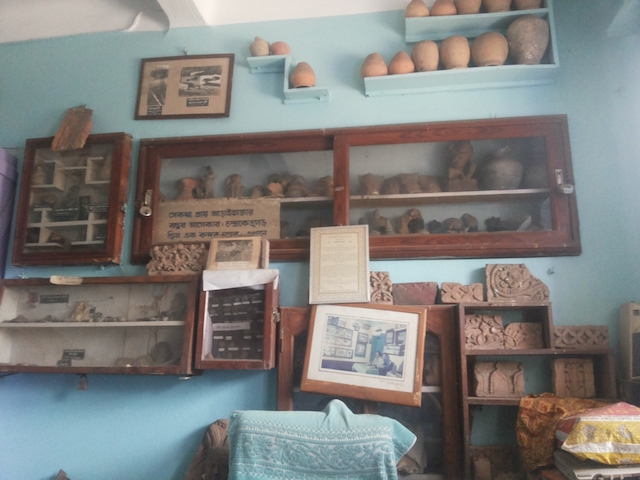 We heard several mind blowing stories about his excavations of different sites of Chandraketugarh. He is the only person in this area who has permission from Government to collect items and all of his items are registered to Archaeological Survey of India.

Currently he is fighting to construct a museum where all the beautiful artifacts of Chandraketugarh can be displayed to common people. Here is a picture of Dilip Kumar Maite and his collection. 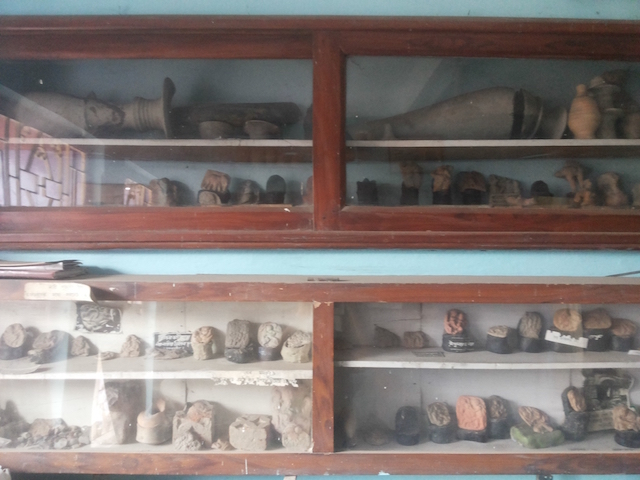 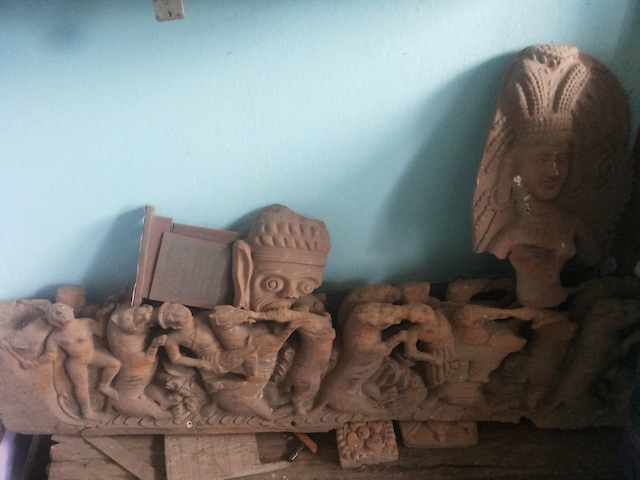 Our next destination was the site of Chandraketugarh. We took a cycle van and the site was around 10-15 minutes from Berachampa. The up and down cost from Berachampa was INR 20 after bargaining. We were amazed to visit the place. It is an Archaeological survey of India enclosed area. It is a huge mound believed to be boundary wall of a fort.

We were actually walking over that place. We could always feel the broken pieces of ancient artifacts here and there still after 2000 years. It was the ancient place of Gangaridae mentioned by greek traveller Magasthenes in his work Indica. ( Reference : http://en.wikipedia.org/wiki/Gangaridai ) 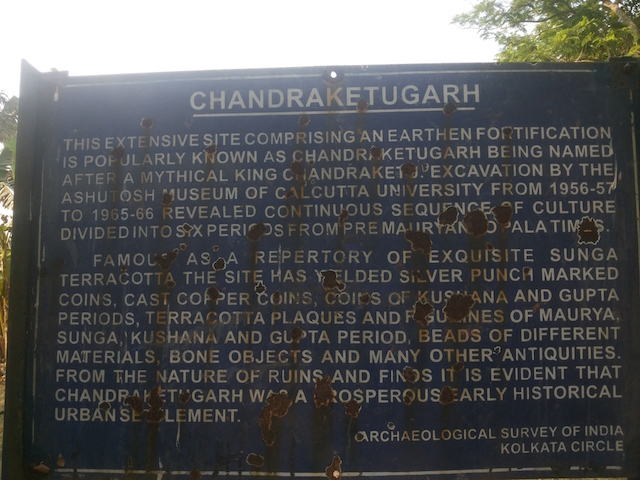 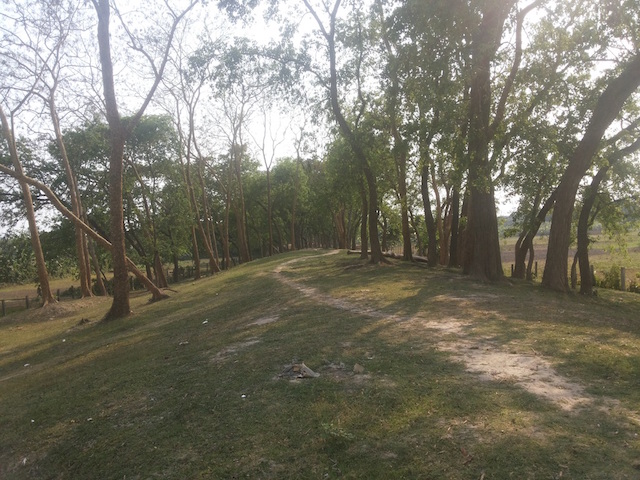 The area is called Deganga. The folklore goes like this :

Once godess Ganga was invited for the rice ceremony of King Chandraketu’s son. But Pir Gorachand conspired and told Ganga that prohibited meat is being served in the ceremony which is against the Hindu ritual. Hearing this, Godess Ganga was sad and took a U-Turn from that place. So this place is known as “Deganga” from that time.

Each and every place in the locality is named in a certain way and there is a story behind everyone of them. Some of them are :

ChupriJhara : King Chandraketu appointed two healthy brothers Hama-Dama for the construction fo the fort. They had two bring clay and soil from a far off place and on their way they shove off ( Jhara ) the clay from their Chupri ( instument ) and it resulted in a mound from the deposited clay. Thus the place is called Chuprijhara.

Rankhola : battle between King Chandraketu and Pir Gopichand took place here
Ghumgarh : The knights and warriors of the king took rest and slept in this place
Ghorapota : The stable for horses was in this place
Hadipur Village : The elephants were kept here
Singher Aati village : The Gateway of the kingdom or “Singha Dwaar” was situated here
Shaan pukur : The King and his family members bathed here
Math Baari : The prayer ceremonies took place here
Noon gola : The store house for salt
Rajar Bagaan : Fruits and plants from around the world were grown here
Maalir Bagaan : The gardener used to grow flowers for the kingdom out here
Dhanpota : The wealth of the kingdom were stored here.

These villages still exist out here around the locality surrounding hte kingdom, the literal transalation of their names actually explains their purpose during the time of the king which I explained above.

Finally we took a motor van to reach Harua road railway station from Berachampa. The Grave of Pir Gorachand and dargah was 6 kms. from Harua road railgate. Annual fair takes place out here. We didnt have time so we took our train back to Kolkata and thus it was the end of a wonderful journey.

Chandraketugarh – a tryst with the mystical ancient history was last modified: July 4th, 2022 by tirtha22