Our trip to Scotland this year was meant to be touching upon the nature trail even though we went during the peak of the famed Fringe festival. We, i.e., my husband and I didn’t take our 6 year old daughter for this trip so all the difficult walks and itineraries were possible. Our flight from Dubai to Glasgow was all of 7 hours 36 minutes. As we were staying with my brother and my sis in law, we had to further travel to Edinburgh where they stay on Easter road, easily accessible to all Fringe venues! 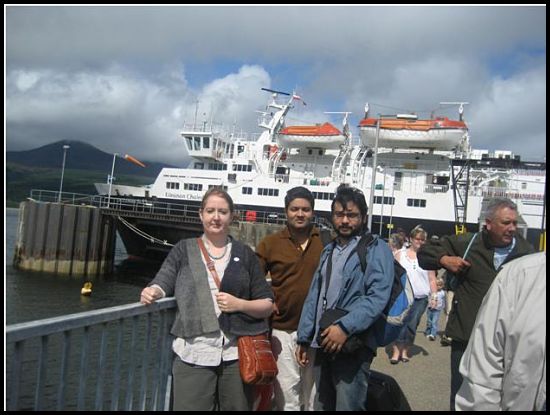 All about Edinburgh will be another write-up, so I will move on to our Arran sojourn. Our itinerary to Arran was for 2 nights and 3 days as the weather forecast was not conducive, it predicted heavy rain showers, with limited sun. With Amy, my sis in law, local Scottish by our side, we were ready to brave the totally unpredictable moody Scottish weather. 4 of us headed out for the Isle of Arran, i.e. my husband Shiladitya, my brother Niladri, Amy and I after booking a return ticket on train and the ferry etc that would take us to the Isle.
The distance from Edinburgh to the Isle is around 120kms which is travelled by train/bus and then a ferry is taken from Ardrossan port to the Island. The train ride from Edinburgh to Glasgow and then change to Ardrossan port takes around an hour and a half. The distance to travel by ferry, Caledonian MacBrayne is 12 miles, which is covered by the ferry within 50-55 minutes. This is a massive passenger and transport ferry, the view from the ferry itself is breathtaking. The entire Isle of Arran is 20 miles long and 56 miles around.

The ferry from Ardrossan took us to the main port of Arran, i.e. Brodick. This is our view getting off the ferry; the mountain with the cloud cover is the famous Goat’s Fell of Arran, the tallest mountain of the Island.

There are two options of rent a car but owing to our last minute plans all the cars were already booked, and we were left to take the efficient local transport the Stagecoach Western Scottish buses to our Hotel which was also on the eastern side of the Isle at Whiting Bay. 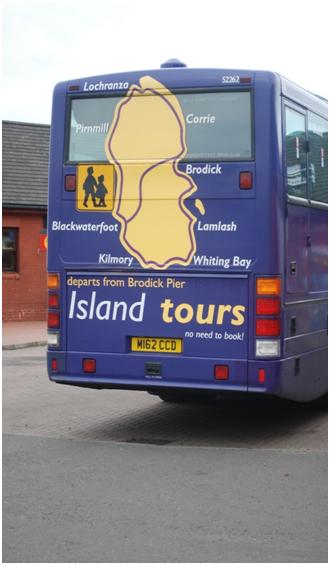 But before we took the bus to check in at the hotel, we had to feed our grumbling stomachs, so we headed towards the popular Brodick Pier after leaving our luggage at the ferry station locker room for two hours till we did the rounds of the little town.

Walk along the pier 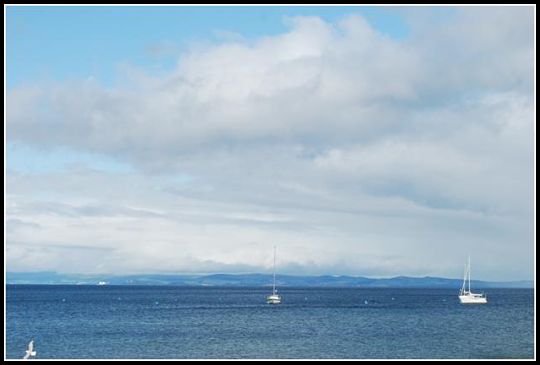 After taking in the crisp air and walking along the pier we had a hearty meal at Bilsland which served local cuisine and popular junk food. Must have on the menu was the Nachos with the famous Arran Cheese! 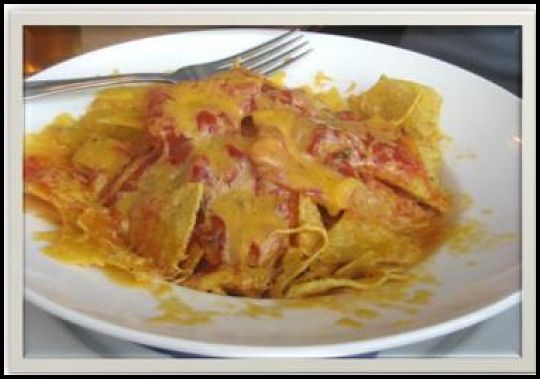 This is where the walking tour of Arran initiated, as once we started walking from the Pier we never stopped till we took the ferry back to Glasgow! After our lunch, Amy decided it was best to walk through the forest towards the other side of the town to go towards the very famous Arran Aromatics and the Cheese factories.
This walk took us an hour and a half but we went through forest which was worth hiking. The shots which follow will speak for themselves. 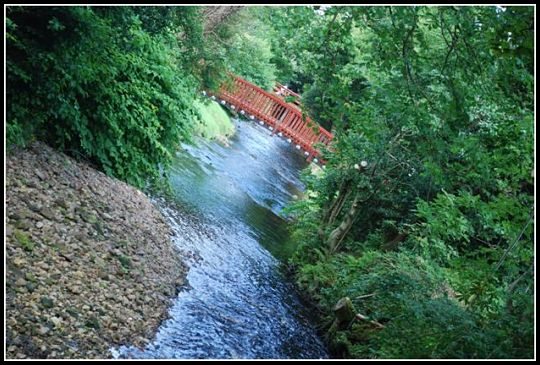 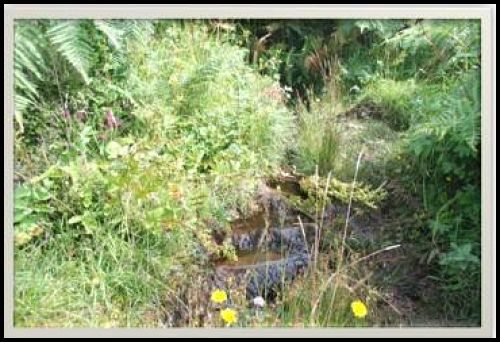 Finally we reached Arran Aromatics which is very popular in Scotland for their specialist body care product range. Arran Aromatics is located besides very popular Island Cheese Co. and the Creelers Seafood Restaurant. Being a vegetarian, the restaurant held no importance for me but I ran for the Cheese shop where my Brother and Sis in law bought my birthday gift hamper, various kinds of cheese, Whisky , Cranberry, Garlic flavours to name a few! 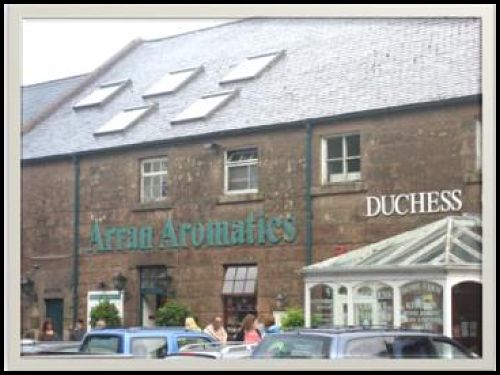 Cheese from the Island Cheese Co. 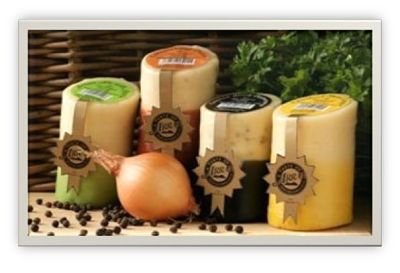 After having our fill at the Cheese and the Aromatics shops we headed back towards Brodick Pier to catch the bus to Whiting Bay to check in for the night. The bus ride took 20 minutes from Brodick to Whiting bay, right to our Hotel Eden. This hotel was situated right across the bay, where we could see the sunrise from our room windows. A sleepy town, with hardly any population, with mountain as the backdrop overlooking the sea, temperature between 12-14 degrees centigrade, what else could people like us from desert ask for! 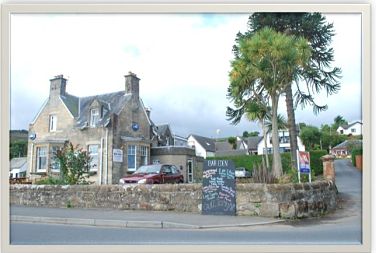 Next day early morning after having our heart’s fill of the Scottish breakfast( not to miss the haggis for all animal eaters!) we headed out for King’s caves hike as the weather forecast was set for a sunny day without any rains. Little did we know what was in store for us the next day.
In order to head for Kings’ cave we had to take the bus to Blackwaterfoot and then get off at the nearest bus stop at Machrie to walk 6 miles of mountainous terrain along the coastline towards Kings Cave at Drumadoon. These are natural caves in sandstone where legendry Robert the Bruce had his famed encounter with a spider. Besides this legend, there are various ancient carvings on the cave walls, which could be Christian symbols or pictorial symbols also. It’s for historians to deduce but for us the walk was really awe-inspiring and the view of the bay from the mouth of the cave was just breath taking. It did make me wonder for a bit though about my level of stamina! 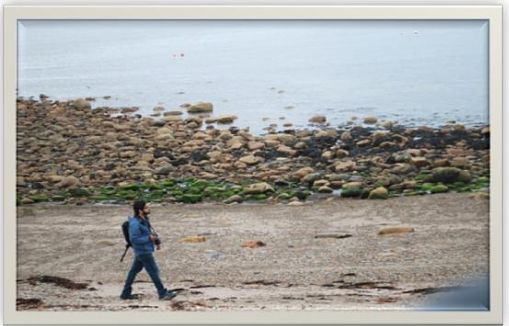 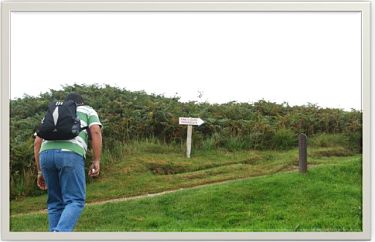 Presence of the Gulf Stream in this bay area lent a very diverse element to the foliage, extremely distinct from the other coastal regions of the British Isles.
This is the little mountain that we climbed…not exactly the steep climb but we hiked all around it to reach the other side. 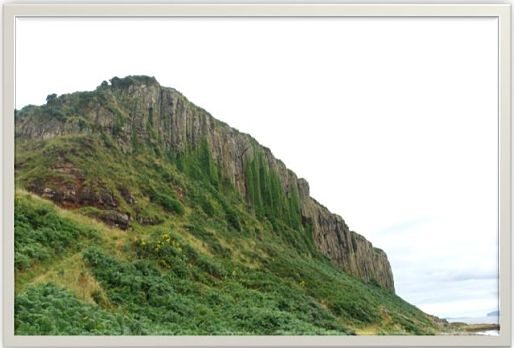 Taking in the excellent scenery we walked for 55 minutes till we saw the cliffs of the Kings caves. 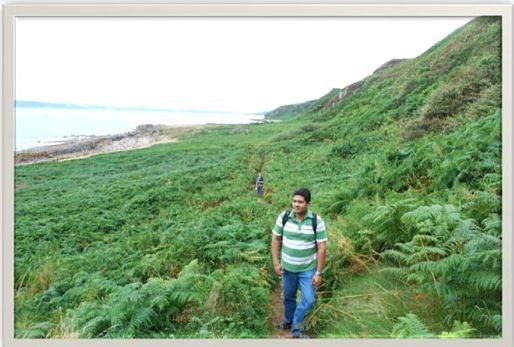 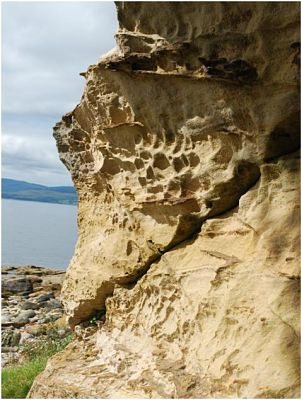 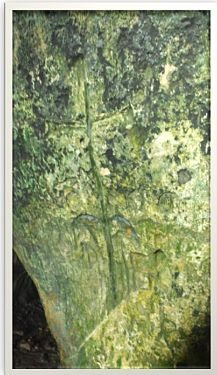 The ancient carvings on the walls of the caves.

This walk was the highlight of the day as it took us more than 4 hours to complete the entire hike and make it in time to the town of Brodick for late lunch. From Brodick Pier we took the bus to Whiting Bay to our hotel where we wrapped up our day sitting in the Pub of the restaurant by the bay.
Day 2, which happened to be my birthday, we planned for Glenashdale woodland walk to go see the famous waterfalls. As luck would have it, as we started our walk from the hotel it started drizzling but that didn’t stop us. It was 6 miles walk from the village just behind our hotel in Whiting Bay. For geologists and nature enthusiasts Arran is a heaven with its mountains and hilly regions. Had it not been for the down pour we would have been able to cover the walk within an hour but it took us more than 2 hours as we were trying to save ourselves from slipping over the rocks. The walking path is alongside the Glenashdale Burn. Whilst walking there are several viewpoints looking out towards the Falls and owing to the rains it was in all its glory.
There were patches of forest where not a single drop of rain touched us owing to the dense forest cover, the colour of the bark of the trees along with the lack of sun light gave an eerie feeling, not forgetting we four must have been the only hikers in the middle of the forest! 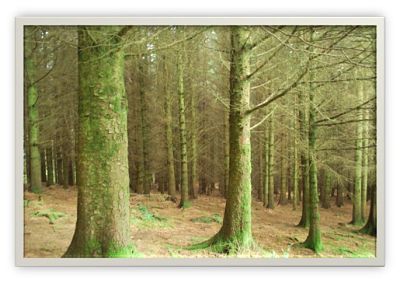 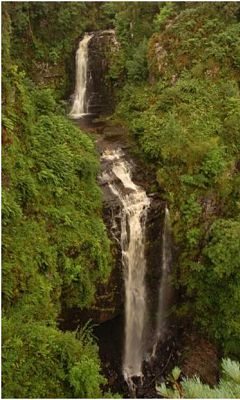 Glesashdale Falls in the backdrop with us drenched to the skin, it was a good welcome to quirky Scottish weather! 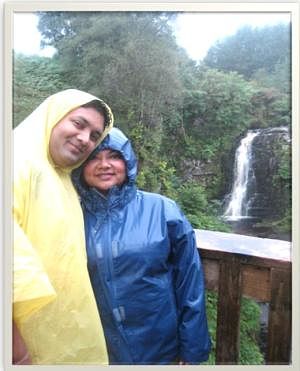 We headed towards our hotel for change of clothes before we caught the ferry back to Ardrossan Harbour and back to Edinburgh via Glasgow. But not before the classic view from our Hotel at Whiting Bay. 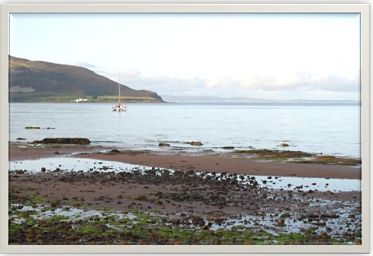 With its bustling market farm towns, green rolling hills, pretty villages and beautiful coastline Isle of Arran has loads to offer to tourists seeking outdoors adventure. I am going back there for sure, to indulge my senses…again sometime soon!

Hello Ghumakkars, Lakhnawi Nawab is back. I got a good response to my first story about Trivandrum. In case you haven’t read it then…