Seeing Niagara had been my wish for long.  In 2001 I went to USA but since my travel happened just after 9/11, I could not visit many places and came back without going to Niagara.  Now before leaving Iceland, I thought it is a good opportunity to visit Toronto, which is 5 hours flight from Iceland and the programme was made.  My daughter too planned to accompany us and came to Reykjavik, so that we could go together.

We knew that my children’s Maths teacher in Tripoli had immigrated to Canada and they were living in Toronto.  We had a few visits to their home in Tripoli, so I called them and asked them to book B&B for us.  Both husband and wife were too generous to offer us to stay with them.  For a strict vegetarian like me, it was more than a boon.  I saluted their goodness, warmth and hospitality and started our journey from Reykjavik to Toronto.  Iceland has two of top 10 waterfalls of the world.  I had seen both and was very much excited to see the one more in the top 10…i.e. Niagara Falls.  We reached the tiny airport and boarded the flight for Toronto.  The excitement level was high….will Niagara be more beautiful than Gulfoss ? 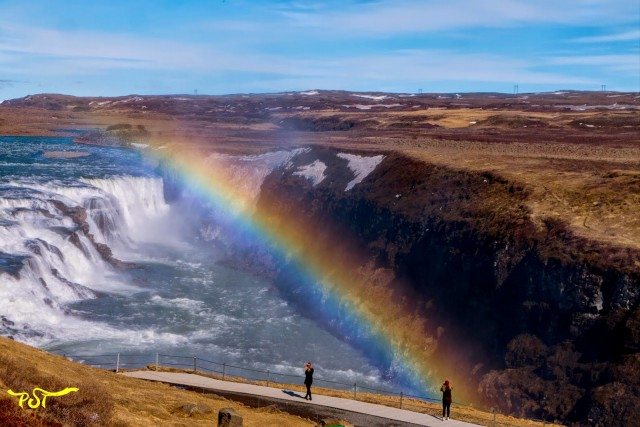 Soon the plane left the airport and we were airborne

After about 3 hours we entered the terrain of  North Canada.  Although it was end of April still the whole area was frozen and was looking beautiful.  I could see the frozen rivers and remembered the Discovery Channel’s ice-road truckers who would be driving on these frozen rivers

The small Canadian islands were looking like paintings from above…. almost the whole of North Canada looked unpopulated.

At around 7 pm we reached Toronto airport.  Our friend Sukhdev was waiting for us at the airport we were meeting after 18 years..Sukhdev had become mona from turbaned sikh so I did not recognise him, but he recognised us and came and hugged us with real Punjabi warmth.

We were ferried to Missisauga, a suburb of Canada, just 15 mnts drive from the airport.  Sukhdev had a beautiful house which was going to be our shelter for the next 5 days.

Missisauga, where we stayed

So finally we were in the city of Toronto !!!  बड़ा शोर सुनते थे पहलू में दिल का… जो काटा तो कतरा खूं का ना निकला   was the first lines which came to my mind.  Anyone who has lived in a small town in India and has never seen any foreign country, will certainly like Toronto.  I was actually not happy to see Toronto, as it was a common city with lot of high rise buildings and construction going on almost every where.   The name Canada and Toronto had made some beautiful impression in my mind, which was shattered and Iceland suddenly started looking more beautiful.

Anyhow we moved towards CN tower which was first on the watch-list.  From outside it did not look impressive.  I have seen Eiffel Tower many times and gone on top of it 8 times… hence CN tower was no excitement.  The only good thing was that it offered a Edge-walk where they would tie ropes around the person and one can walk on the outside walls of the tower, feeling like one is hanging in the sky…but the sheer fear of height did not allow us to try that.  Weather was also not clear hence the views were not awesome and our 48 dollars per person seemed wasted on CN.

CN Tower at a glance

Posing with a model of CNT

View of Toronto from CN Tower

The lift also had glass floor and watching down brought goose bumps…. the lift’s speed was very high and soon took us to the first floor, which is about 1000 feet from the ground

View of Toronto from CN Tower

Some portion of the tower was made of strong glass and we can stand over it.  Seeing down from the height of about 1000 feet brings shivers in the body.

After enjoying the tower heights we came down and saw a 3D movie and a ride simulator, which was included in the ticket.  Besides CN is the Ripley’s Aquarium which is biggest and best in Canada.  We entered the Aquarium.

The dangerous lagoon in the aquarium is the place where they have kept sharks and there is a tunnel over your head…. sharks are roaming freely with other fishes, not eating them.  It was first time I saw a shark so near.

She is angry ? or shakal hi aisi hai?

Diver feeding and playing with sharks

another type of jelly fish

Quite refreshed by the aquarium, we came out.  The weather was still bad so we decided to return home and come back the next day to finish Toronto yatra..

(will continue in next part)

Finally it was time to have food and it was so sumptuous that we forgot to click the images. There were 5 kinds of vegetables, 3 kinds of chapattis, curd, sweets, desi ghee and I don’t know what else. After meal my only thinking was that if they fed so much then for some extra charge they should also provide a bed so that one can sleep then and there if felt so. But indeed it was a bad idea even I can’t imagine people sleeping and burping at this beautiful place. So, I scolded myself for such a bad dreaming and we came out more than happy, filled till neck, and started the engine to find a bed as soon as possible.