There was some work to be done at Dehardun, the capital city of Uttranchal and it could be done over a weekend. I had an opportunity to take a

Assuming that some of you may not be familiar with Doon, here is a small primer. Dehradun (or Doon valley) is the capital of Uttrakhand state, with a total population of 4.5 L. It is about 250 kms from Delhi. The city is well connected by road, railway and air. From the very first look, the city is rich and metropolitan – with cars, premium showrooms, malls, multiplexes and eat-out joints. The valley is also the home to many govt. institutions – Survey of India, Forest Research Institute (FRI), Indian Military College and Indian Military Academy (IMA), more than 300 schools (!!!) – the likes of The Doon school, St. Mary’s and Welham.

The city is shaped circular, with a few important elongated roads. The major modes of transport are cycle rickshaws and “Vikram” – the three-wheeled auto that can carry upto 12 people, in addition to the blue-colored buses that are primarily meant for inter-state travel. There are city mini buses as well, for the local / intra-state travel. Most of the population is Hindu, with a fair share of Sikhs (due to some important Gurudwaras in the vicinity) and a small number of Catholics as well (associated with the convents in the city). Dehradun is also an important city from a tourist’s point-of-view, since it falls on the way to Mussourie (a much popular hill-stn in the North) and some more tourist places that side (Tehri) of Garhwal.

The city is urban to an extent that there are call centres, IT companies, universities and all that make for an independent, well-equipped place to live in. The hub of Dehradun is a popular landmark called the Ghanta-ghar (Clock-Tower), which is also a junction where the roads are marked for the surrounding cities like Haridwar, Roorkie, Yamunanagar, Saharanpur, Paonta Sahib and Mussourie.

The plan was to get over with Doon business and spend the Saturday at Dhanaulti. We left hotel at 11-ish and drove up towards Mussorrie. After a while I realized that when I move the steering-wheel, I am getting some kind of obstruction. So I stopped, checked whether some thing is stuck at the base and found nothing. Washed the grease off my hands and was wondering on what to do. The car was driving well but the sound was hurting me and the last thing which I wanted was to get stuck somewhere up. So I called up someone in Delhi and asked for help. I was guided to check for ‘steering oil’, which I did and that didn’t seem too low but I got assurance that I should keep driving and get it checked when I return on Sunday. There was not a reason enough to panic, so I drove ahead. 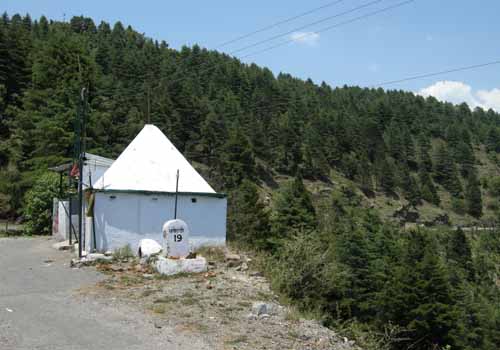 On the way to Dhanaulti

So I drove uphill, took the by-pass just before Mussorrie, the same by-pass which you take if you want to stay at Jay Pee property. It saves about 5 KM and the usual high rush at the lake, I really wonder that how on earth something which is a little bigger then a swimming pool command such rush! After a while, we got into real mountains with pine trees, blue mountains, clean and fresh air, green all around and little to no traffic. It was a typical Himalaya drive with a mountain on your left and the fall on the right, swapping positions every few corners. The drive is not long and we were at Dhanaulti by 2-ish. 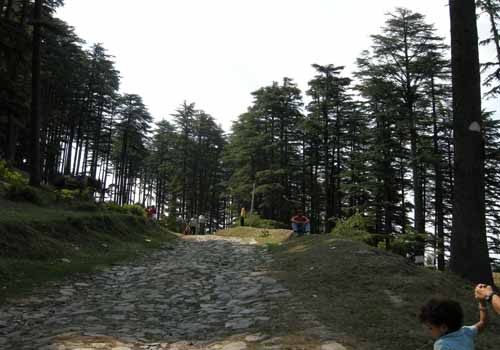 We reached the place, which is about 2 odd KMs before the main town, where we had booked and were taken for a big surprise. It was not what it was sold as, and we had been asked full advance. Lesson learnt, never ever pay advance. If someone is asking for an advance, do not give unless you have some good references. So we shouted at the poor chap (we should not have) for cheating us and moved ahead, hoping that we would find something else and also to call up their Delhi brothers to shout more. Forget it.

Dhanaulti is sort of a hamlet and is on Mussorrie – Chamba road. It doesn’t have too many landmarks to boast of and one usually visits this place as a picnic-spot or for a day sojourn. Typically tourists stay at either Mussorrie or Chamba and do a 4-5 hour day trip to this place. There are some hotels and a KMVN guest house but no great property to write home about. There is a small market with some teeny-weeny shops. One can take some walks, feel some fresh mountain air and just while away. Kids can enjoy a pony ride. Its at a higher altitude then Mussorrie and I think it gets decent snow fall in winters, during rains you can actually talk to clouds and share jokes. Legend is that if they don’t like your joke, they just throw-up. So its advised to be ready with a good sturdy umbrella but better to avoid getting close. Being a serious guy myself, I usually stay away and prefer a lonely trek.

We had Maggi at one of the road side stalls and after taking an eye-full of hills and pines, we were mulling on whether we should drive back home (8 hours at a minimum) or stay at Doon. We decided to take a break and not stress ourselves too much. We decided to go back to Doon and stay in the city.

Before we leave, here’s a pic of a gentleman with long hair. They are no longer there now and probably my next trip should have a snap verifying that.

So I revved the engine and the steering still didn’t move. In a split-second I figured out the problem. The steering oil had gone dry and it was between me, the stiff steering and the mountain to ensure that we reach Doon safely. Fortunately, all three of us co-operated, the steering by remaining as much as stiff as it could and not going any stiffer, the mountains by remaining the same and sane as they always are and my biceps who had a good opportunity to prove their worth.

As we were driving down, we noticed that there is some ‘Malsi Deer’ park close-by and we spotted the same in time. While you are coming down from Mussorrie, it would be on your left, very close to when you think you are already in Doon.

‘Malsi Deer’ park is a not so big zoo with enclosures for peacock, guinea, ducks, vulture, parakeet, leopard and a large barrier-ed area where deers roam freely. I know you would wonder that how a deer can roam freely in a barricaded area, it’s like more freely. There are swings and slides for the young ones, a small cafe which seemed to be well stocked with soft drinks, chips etc and most importantly its not very well kept so there is this bit of natural/raw feel. It doesn’t have well manicured grass or symmetric rows of plants but there is a loo which is clean, there are real animals and not too much of rush. If you have time, I would recommend that you stop here for an hour. 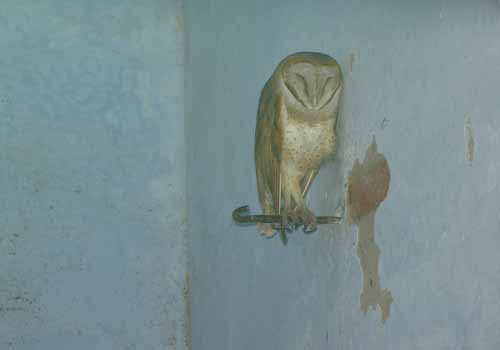 I could not click the leopard (Learnt later that she is called Rani) as she was deep in slumber in her room. I could get a glance of her fur and the long tail.

We went back to ‘Hotel Ajanta’ and slept well. Started after a late breakfast, and stopped at a auto-spare shop. You have to be a really fazed reader to not figure out a reason on why I stopped at the auto-spare shop. Assuming you aren’t, then do express so in your comment to the story and the best one should get a travel booklet as a prize. Anyway, we took the other route this time, Roorkee – Muzaffarnagar – Meerut – Ghaziabad, and were back home by early evening.

Here’s the bonus pic for reading this far. 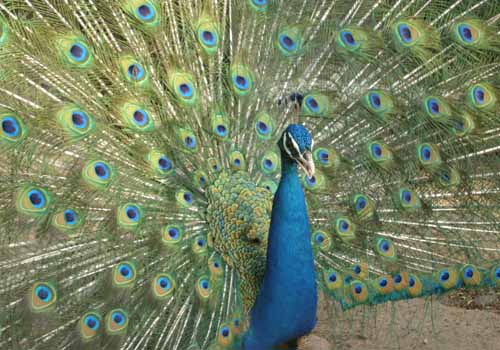 Peacock – Males can be beautiful too

A quiet weekend at Dehradun was last modified: July 27th, 2019 by Nandan Jha