Visiting Wagah border was on my wishlist for long. It finally materialized early this month. This post shares the experience of going till Pakistan border and witnessing evening flag retreat ceremony.

Note that I went there as VOP- very ordinary person, one among thousands of generic public who’d arrived at the gate to witness the beating retreat ceremony. If you know someone in the army, you may get a VIP pass that entitles you to closer and better seating and much nicer view.

Advance booking: NOT possible
Public transportation: Not available, but autos and taxis can be rented from Amritsar town
Parking fee: Rs 50
No mobile signal is available. 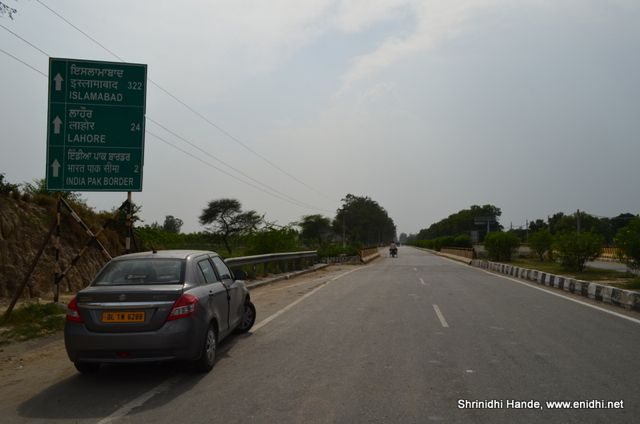 Entering the Wagah border evening ceremony venue:
There’s no advance booking, no token system and no systematic way to let public register and witness the event. One has to be part of the mad crowd that gathers at the gate, wait patiently near for long time and then get herded in. Knowing that gates are expected to open at 4PM, we’d reached the venue well ahead of time, at about 3.30PM. As we didn’t have any VIP pass, we are asked to park in a faraway place at a parking fee of Rs 50. We took a cycle rickshaw to be ridden till the gate, which was another km or so from where we had parked. We noticed other vehicles going even further and parking closer to the gate- we were diverted by a local guy so that we could use his parking space. You can insist that you wish to go further, or just say you’ve VIP Pass, you’ll be let through the initial parking attendants. However, our parking little far proved to be advantageous, as there were some protests in the evening causing blockage of vehicles trying to return to the city. Because we’d parked at a distance we managed to cross the protestors and return to city early. 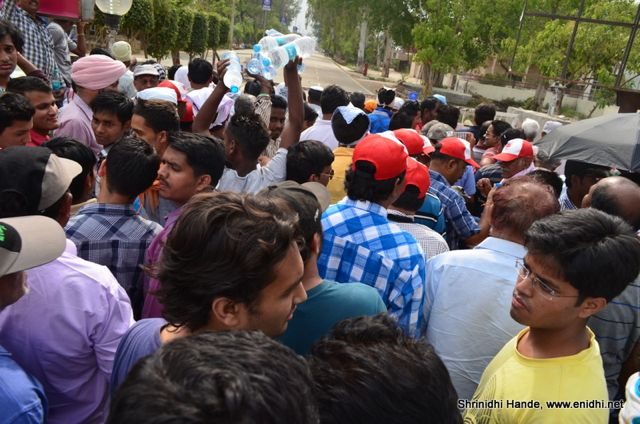 crowd at the entrance

Once at the entrance, the wait for it to open began. There were separate queues for men and women. Water bottle sellers were doing brisk business, claiming there’s no water supply inside. (This is not true-refreshments were available inside). Enthusiast crowds cheered pro-India slogans while waiting for the gates to open. The crowd was gaining strength minute by minute and it appeared like if allowed, everyone are ready to barge into Pakistan and do a war. Protecting our valuables was getting difficult and elderly men and children ran a risk of getting injured in stampede if they were to be part of this crowd. 4PM crossed, no sign of opening the gate. Those with VIP passes were going inside at their convenience.

4.15PM, still no opening of the gate. Now the slogan turned towards guards manning the gate-first request, the despair urged them to open the gate. At 4.20 PM, a guard raised above the gate and gave a quick briefing- to walk carefully, not rush etc. No one was in a mood to listen.

4.25 PM, gate was partially opened to let women’s queue in. Men waited and waited as all the women, even those who were still getting down from their vehicles far away were allowed in first.

4.40 PM, gate was finally thrown open. People started running as if there need to buy tatkal railway tickets. Security check was happening few meters ahead, hence people had to form a queue to go through it.

4.50 PM: Security check over and we were guided to a seating area. I had to decide upon a quick vantage point to take good photographs- I could stand in the first row- get a closer look, but ran a risk of my view getting obstructed by people ahead, who might stand up to get a better look. Or I could go to last row, which was the most elevated position and rely on my 300mm lens to do the work. I chose the later. Though I got some good photos, those sitting in women’s box and those in VIP area would get much much much better view. The gate was too far from where I stood, so the pictures of actual ceremony didn’t come really well.

5.15 PM and there’s no sign of any function starting. Sensing restlessness of the crowd, organizers invited a dozen pair of girls to the central area and made them run from there till the gate and back, holding the Indian flag. Loud music of patriotic songs gave them company. I think this is not a standard practice, but introduced to kill time and entertain crowd. 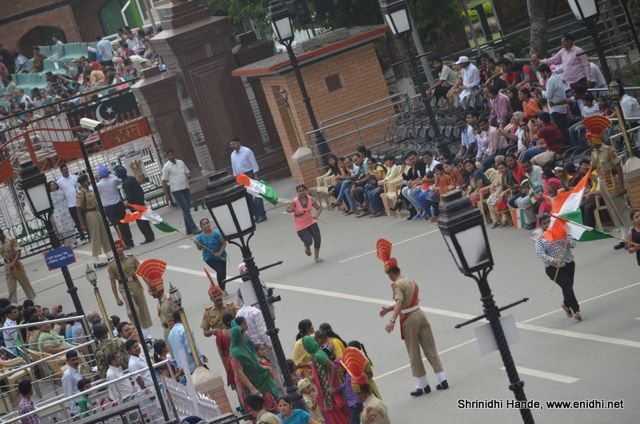 After that a bunch of ladies walked to the central area and started dancing. Meanwhile, those vendors who used to shout “buy water now itself, not available inside” were busy selling more water bottles, Rs 20 a bottle. 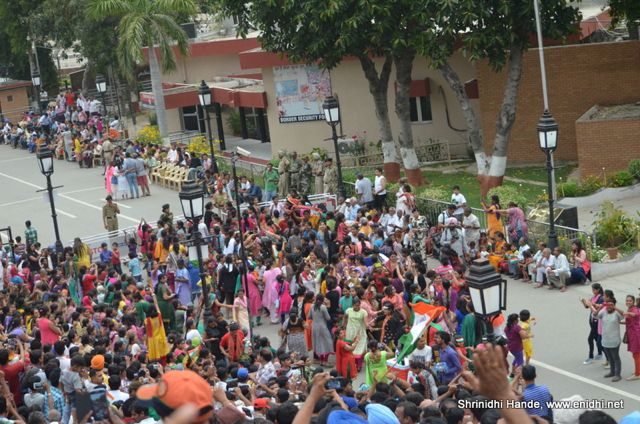 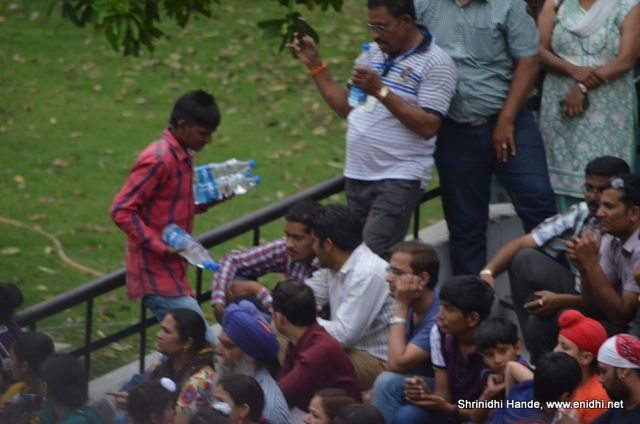 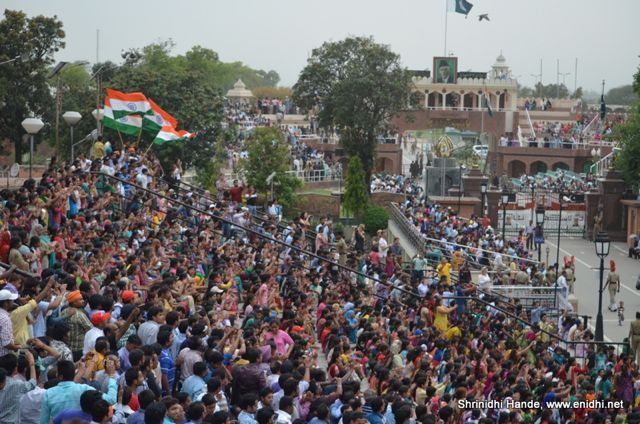 This 3rd stand, which was empty all these time started filling up- I guess this is reserved for later comers- i.e. once main stands are full, subsequent visitors are let into this box. If that is true, no need to rush, try your luck arriving little late.

Pakistani nationals were beginning to gather on the other side of the gate, in a similar set up. Their loud speakers were raging pro-Pakistani songs and slogans. 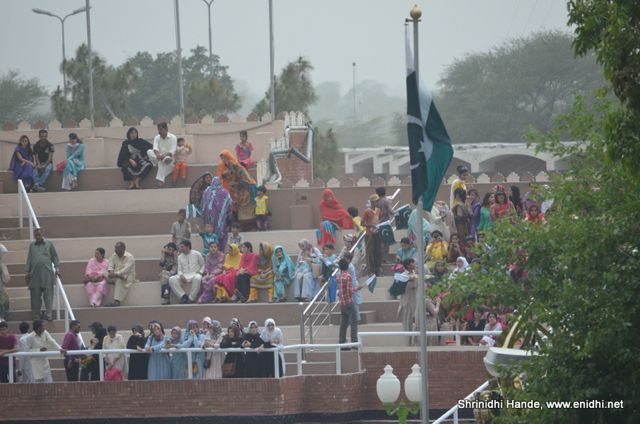 visitors on the pakistan side

Finally by about 6PM the actual ceremony started. The gates were opened and officials from both sides greeted each other. Flag lowering Ceremony involved a series of marches, loud and sustained shouts by the guards and display of aggression by the soldiers of both nations. Their thighs raised as high as their shoulders while performing the final step. 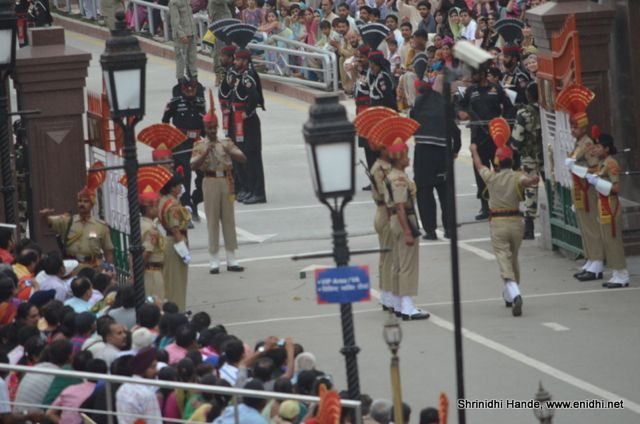 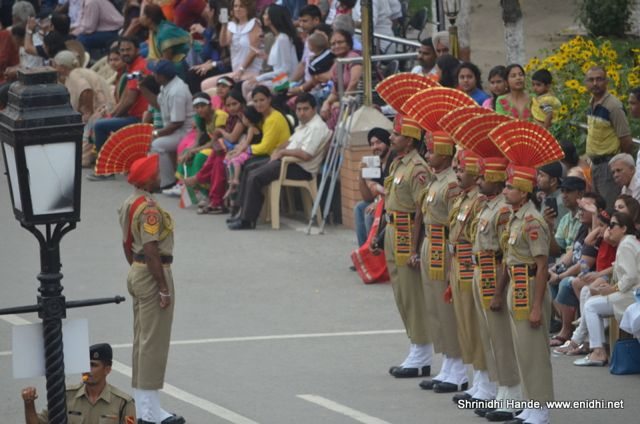 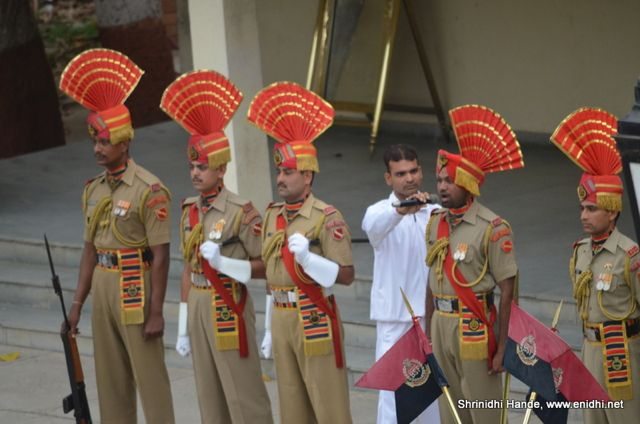 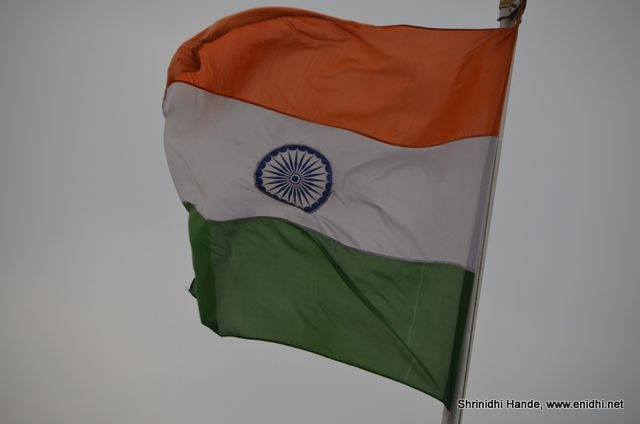 Subsequently the flags were lowered in perfect unison, folded respectfully and stored inside. 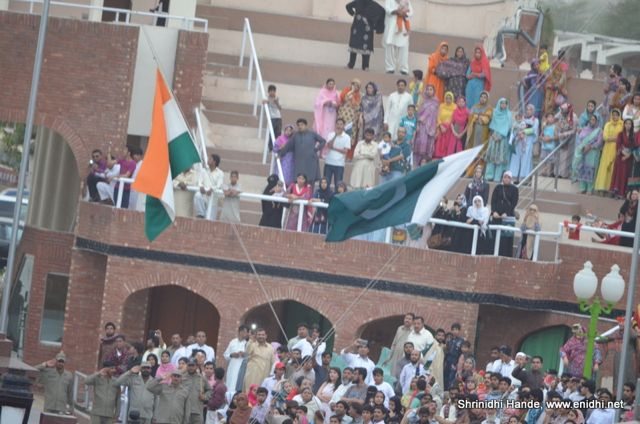 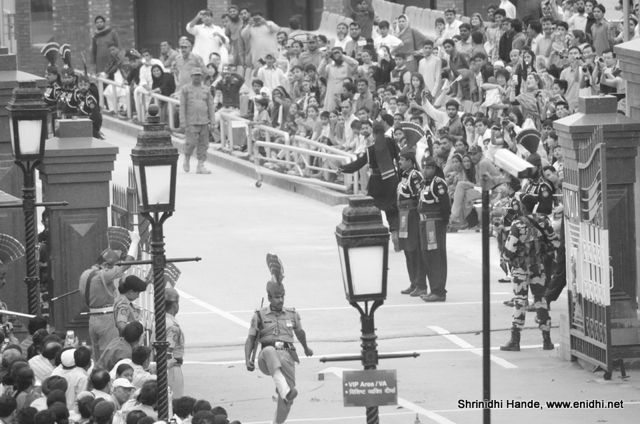 By 6.40, ceremony was over and people started moving out. Many went close to the border, a set of fences that mark the difference between 2 different nations, in an otherwise identical geography. I clicked this closeup photo of a Pakistani ranger.

Not sure if there’re any celebrations when the flags are hoisted in the morning. As we came out, a bunch of people had blocked the road and were protesting against something.

It was a memorable event to witness. A better seating and proper visitor management would have made it even great. To quote an example, world trade centre memorial in New York has an online pass system. Only specific number of people are let in every day at designated timing.

To conclude: Evening ceremony at Wagah is a must visit experience if you’re going to Punjab. If possible, get a  VIP pass. If that doesn’t work out, give the camera to women in your team- they will have better visibility and can take better pics. Water and refreshments are available inside, but when the ceremony is in progress you may not be able to walk out and buy something. Post ceremony you can refresh yourself. Photos, DVDs, souvenirs are all available for sale. Mobiles will NOT work in the border. So if your loved ones are separated from you because of gender or crowd, you need to have a meeting place pre-decided- like in front of the washroom or near the car etc, to avoid confusion and panic.

I am a Business Analyst by profession and blogger by passion. Blogging since 2006 at www.enidhi.net. I enjoy travel, photography, chess and long drives

I grew up with my cousin, Tanvi and Manan, in Noida. Together, we had lots of fun. Bade Papa later shifted to Mumbai. We…