ROME– doesn’t this word alone trigger your imagination? Doesn’t it make you feel the romance in the air? Doesn’t it talk about style, culture, history etc etc ?? Yes, it surely does! The city is full of offerings for all varieties of travelers. It offers its best to everyone and makes sure that no one person goes back unsatisfied!! Am I talking like an ambassador of Rome who is proudly publicizing about it?? Naah, but frankly, it doesnt matter how I sound :) All I want to do is to share my experience about my 2 day tour to this city which SURELY wasn’t built in a day!
Like always, I looked up the internet and made some draft itinerary for our 2 day trip to Rome. I had almost concluded that we could barely make it a “touch-n-go” trip looking at the many many places to see in and around the city. The churches, the museums, the piazzas, the Vatican, shopping areas, this and that – what all do we see? Now was the time when I had to send the itinerary to my friends and hence quickly made one – yes – after hours of turmoil in front of the comp breaking my head and prioritizing the places!! Quite quick isnt it? :)
Our group was a mix of people with different wavelengths – while one preferred museums, the other preferred fountains, and some other one preferred street tours :) With the diversity in mind, here is how I planned the itinerary:

I had my research done about best and economical ways to commute in Rome. I must tell you how reasonable the transportation in Rome is!! 1 Euro ticket is valid for 90 mins and can be used in trams/metros or even in buses! Quite economical isn’t it? And in my opinion, there is no need for a Roma Pass- which is about 20 Euros and gives you access to selected museums and serves you for 3 day transport. Instead we can buy day tickets which are around 4 Euros and use it for a full day!

Our trip kicked-off as per plan.. The Vatican City!! The best way to explore Vatican is through guided tours. I recommend this for 2 reasons – one because it offers you an in-depth knowledge about each part of the Vatican city and two because it helps you by-pass the crowd which awaits at the Vatican entrance IF you don’t take the guided tour. A pleasant experience for me here was that I got discount on the guided tour because they thought I was a student and I dint deny it too!! – What a beginning to this wonderful trip!! :)

“Benvenuto a Roma – Welcome to Roma! It is RRRoma not Roma (with 3 Rs)” – This was the way our guide started and mesmerized with her non-stop oration about the city, the Vatican and its history.The Vatican City State (usually called the Vatican City) is located in the middle of Rome .Vatican City has an area of approx 44 hectares and a population of a 800 or more. It is the home and the kingdom of the Pope. It is vast stretched and massive in terms of architecture with several columns standing erect and forming an arena infront of the St.Peter’s basilica. 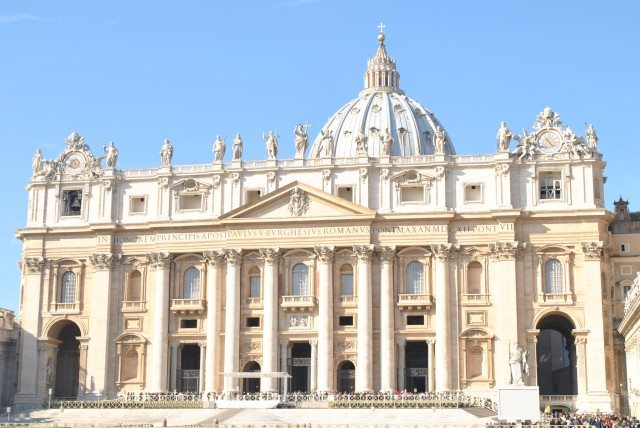 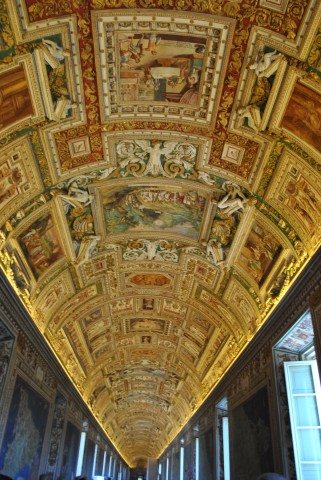 Roof paintings inside the Vatican Museums

St. Peter’s Basilica is the largest Catholic church in the world. The basilica has a rich and stunning exterior and grand and awe-inspiring interiors! The statues, the paintings and the carvings of the interiors – each have a tale to tell and you will feel engulfed by those times as you walk through the Basilica. It also has a Dome on top of it from where you can catch a glimpse of the panoramic view of the Vatican city. This Dome is one of the world’s largest and tallest domes. It is a masterpiece by itself! 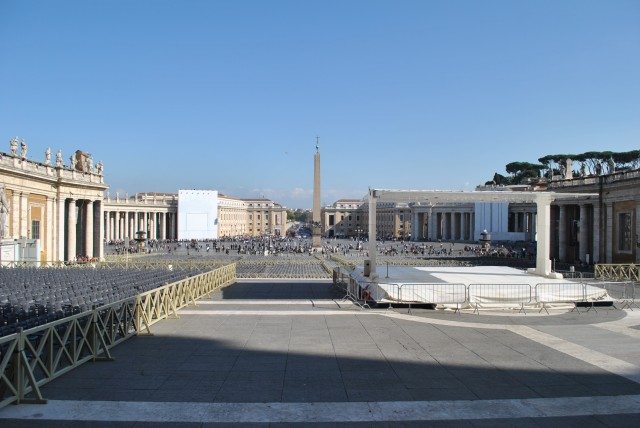 Wide angle view of the Vatican from the Papal stage

The works of Michelangelo are among the famous displays here. The sculpture of Virgin Mary and Christ on her lap is believed to be the only piece which shows the signature of this renaissance artist- it is believed that they were not allowed to disclose their identity on any of their works! 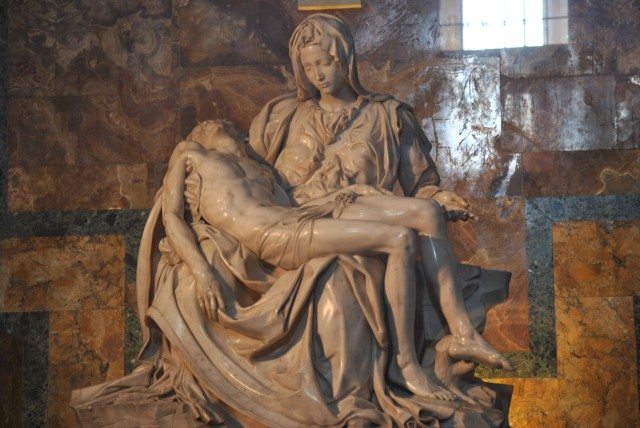 On the paintings of the “Final Judgement”, we can see tiny mascots of the artists – which are the only way to identify the artist of that work!

Roof of the St.Peter's Basilica 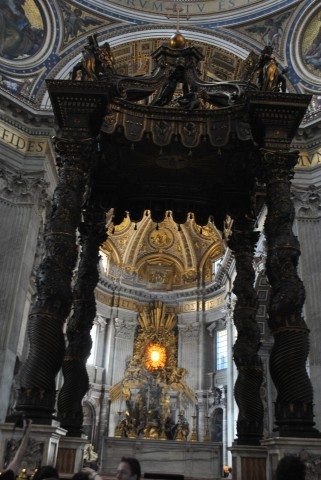 Bronze pillars inside the St.Peter's Basilica

For people who follow Christianity or for catholic history enthusiasts,this tour surely will have lots for them to take away!
After a wonderful and emotion packed guided tour, we stopped over for lunch. We had the local cuisine which is world famous – the Pizza! I also had tiramisu and bought a handful of roasted chestnut to munch during our journey towards the Pantheon.

The Pantheon aroused interest in me from the recent documentary on CNN. The documentary had shown Pantheon as one of the best preserved architectural monuments of the ancient times!

“Palace of the gods” – Pantheon is a magnificent structure and a spectacular monument. Its dome bags a majority of the credit and is a scientific wonder too! The Sun rays illuminate the portico on the equinox day and the design of the dome was made to facilitate this! Isn’t it a scientific marvel?? Also, the granite columns were transported from Egypt across the Mediterranean sea to be erected here at the Pantheon. They stand unperturbed by the variations in climate or the changing governments. 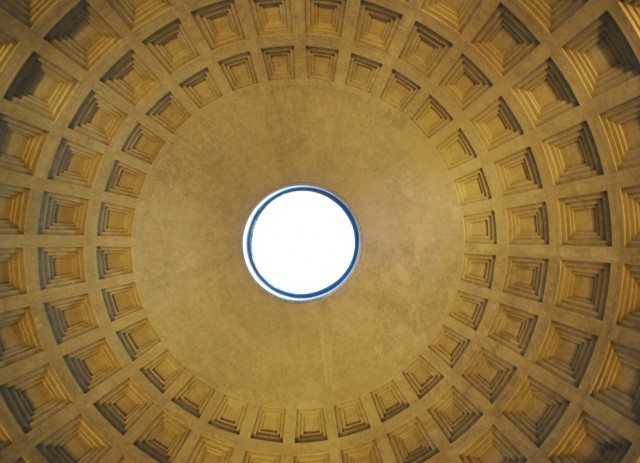 Roof of the Pantheon

After a tour inside this masterpiece, we rested in the same area and treated ourselves with some aromatic home blend coffee and rich chocolate cookies.

We still had some energy left or probably the chocolate cookies worked wonders and we decided to catch a night view of the Colosseum. It looked classy as it stood illuminated with minimum lighting making it truly worth our effort to walk till there :)
Back in our hotel that night, we were all excited about how the day went and we planned even more effectively for the next day. I could see the effect of the city on all of us – just giving us a “go and explore as much as possible” spirit.

Day 2 started with aching limbs as a result of the walk tours in Vatican. “Nothing can stop us!” – we shouted in unison and began our journey towards Colosseum. Guided tour operators welcomed us with almost any language that you can think of. However, we dint take it this time and decided to explore it ourselves. This once upon a time amphitheater gives you hallucinations of the roaring lions, the furious gladiators and the screaming spectators of those days. 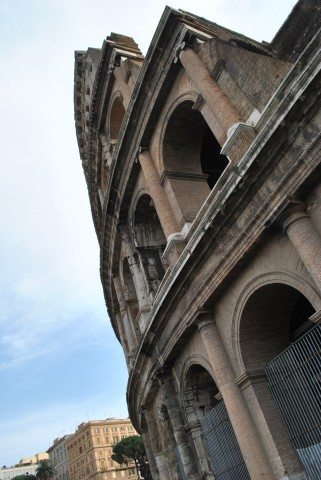 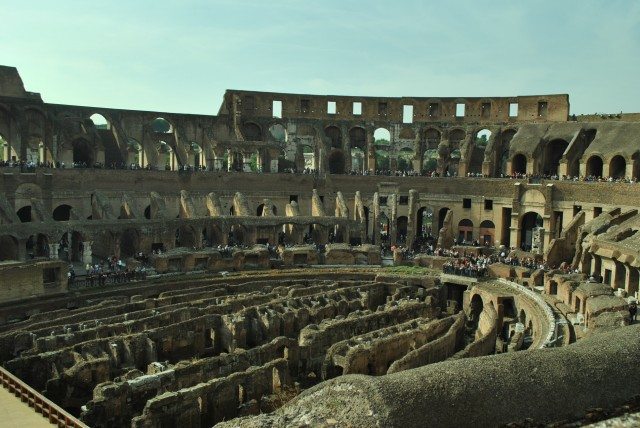 Come out of the Colosseum and see the hawkers there – you will hear them speak in Hindi – because they are either from India , Pakistan or from Bangladesh :)
It was noon by the time we came out. Hence, we lunched at a deceivingly exotic hotel. This small hotel had the best lasagne and pasta! We hogged till we were brimful and then proceeded towards the Roman Forum.

The Roman Forum was a center for cultural, political and social activities. It consisted of the senate, temples , courts and many architectural edifices. This Roman Forum was unearthed during the excavation work to reveal a massive chunk of the Roman Empire. It signifies the historical city center because of the senate and other such landmark buildings contained in it. 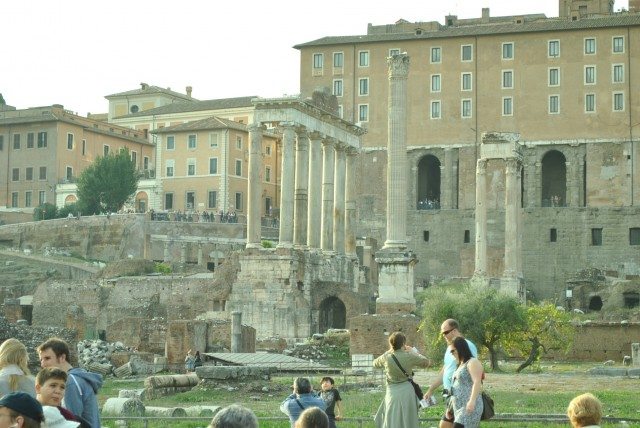 The archs and the columns appear as if they were the sky-scrappers of the Roman Empire. It gives a sympathetic image of the once pompous and glorious Roman Empire. 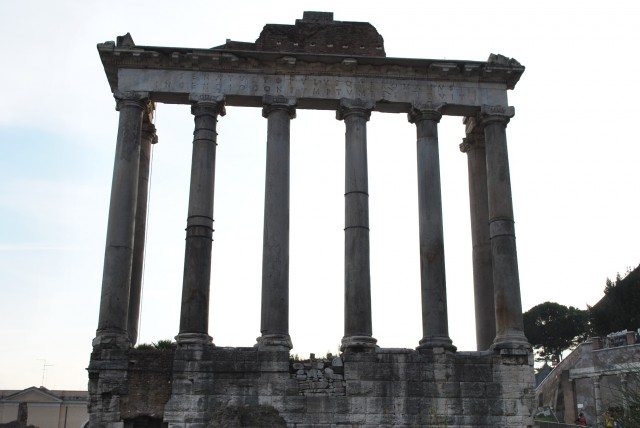 Inside The Roman Forum

Adjacent to this is the Palentine Hill which marks the region of the city where the elite lived.
This is a MUST GO place in Rome to get a feel of the Roman Empire in a nutshell.

Feeling like Romans ourselves, we walked out of the Forum with gait and headed towards the Trevi Fountain. It was almost evening by now and was the apt time to go to the fountain.
We had to walk a little while before we reached the Trevi fountain because we were not exactly sure where it was. But this added some surprise to us since we suddenly discovered the Trevi fountain in an almost unexpected manner. Yes, in a corner at the junction of 3 roads!! 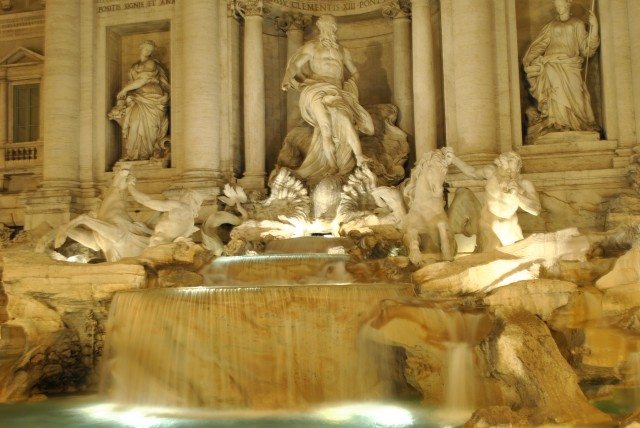 There it stood.. in a 2-3 building wide area, crowded with hundreds of people and beautifully light up with street lights. The trivia about Trevi is that if you make a wish and throw a coin into the fountain, your wish is granted. So, mostly immobile crowd here since each has a big list of wishes! Some people rather feel this fountain is hyped. However, it is a nice place to visit in my opinion.
We threw “coins” and made some “wishes” and then walked towards what I now feel was the best part of the Rome trip – The Navona Square/ Piazza Navona.

The experience in the Navona Square is something that words cant explain. You have to be there to feel it yourself. It is a huge open market kind of an area with restaurants lined across either sides of the Square. The Fountain of Four Rivers is the most romantic spot. It is enchanting and mesmerizes you with it’s aura. I fell in love with this place and sat on the footpath there along with my friends and kept savoring every moment! To add to the excitement, this market square was adorned with a huge number of artists. Some painters, some musicians, some actors and also some vendors. The painters were painting scenery in a minute using spray paint! I found such artists even in Belgium but the ones here were making the audience spell-bound with their work! We got one made exclusively for us and got it as a souvenir. 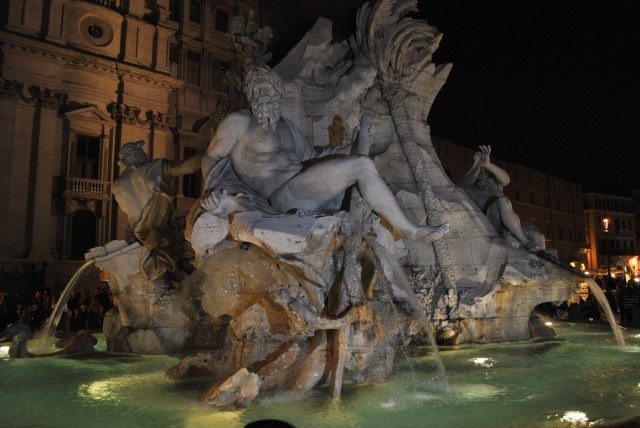 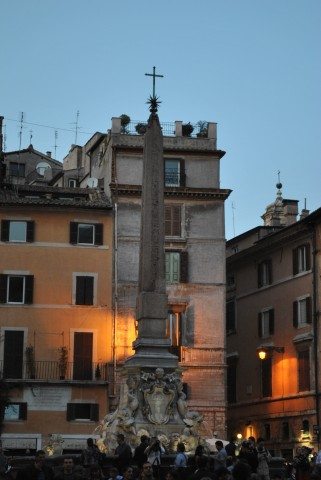 At the Navona Square

Food is never a problem in Rome. We also spotted some Indian Restaurants on our way. We dint get too picky about it and chose a restaurant near the Navona and dined leisurely.

It was the last few hours in Rome.. The closing of a great trip.. 2 days in this mind-blowing place was worth every minute and every penny spent. I would love to go back there. To Navona in particular only to breathe the light air with a heavy aroma of Roma and the intoxication of the city.