We started walking carrying our backpacks to our first destination .. towards Pandav Caves . 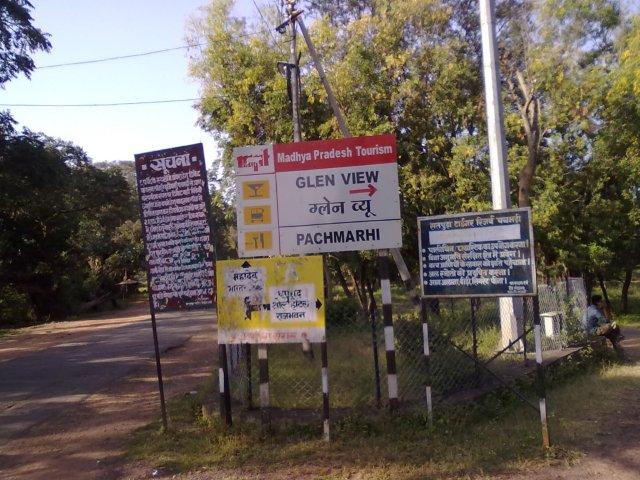 Streets of Pachmarhi with signboards

While walking through the city , which is mainly an Army Cantonment area housing many servicemen, we happened to see a church named “Protestant Church” it was bolted and locked with some buffaloes grazing in the area enclosed within the walls of the church. Probably the church only opened on Sundays for public prayers,sermons and religious meetings. 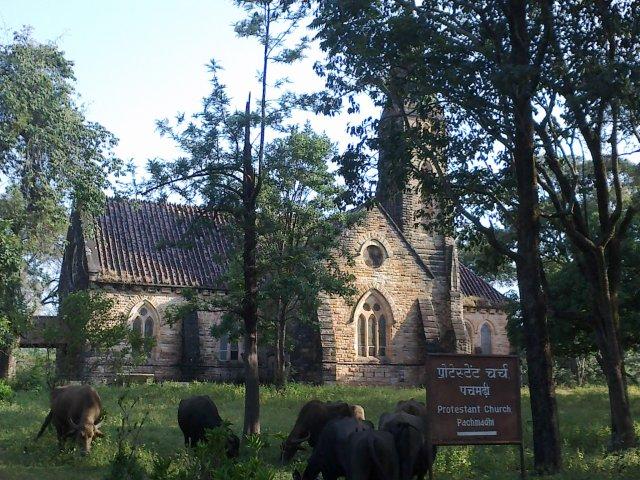 Protestant Church built in the year 1875

This magnificent structure reminds one of the British annexation of this region and making it a summer hill resort.By looking at the church its medieval architecture and grandeur can easily be apprehended.

A few minutes walk ahead lead us towards the Pachmarhi lake towards the south surrounded by the Golf Course with local habitation around its pockets. 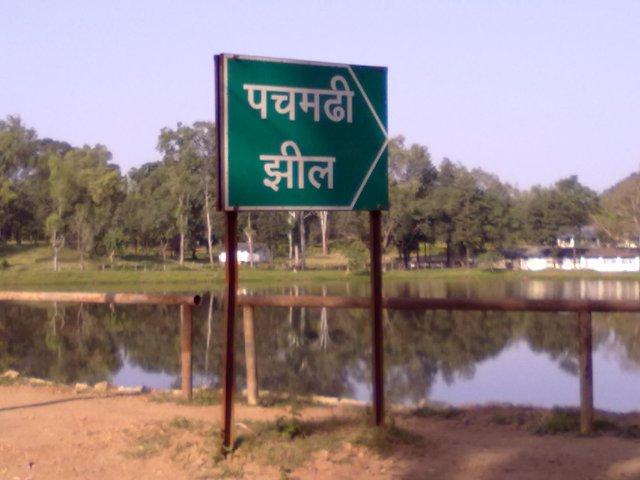 Few kilometers ahead following the directions we reached Pandav Caves around 8.30 am in the morning. There are five caves carved out of hillock and a vast garden housed in a single complex. Pachmarhi derived its name after these five caves historically known to be built by the Buddhist missionaries.Factually these caves date back the Gupta period of ancient India. But in populist view it is widely accepted that the Pandavas took refuge here in the 13th year of their exile incognito. 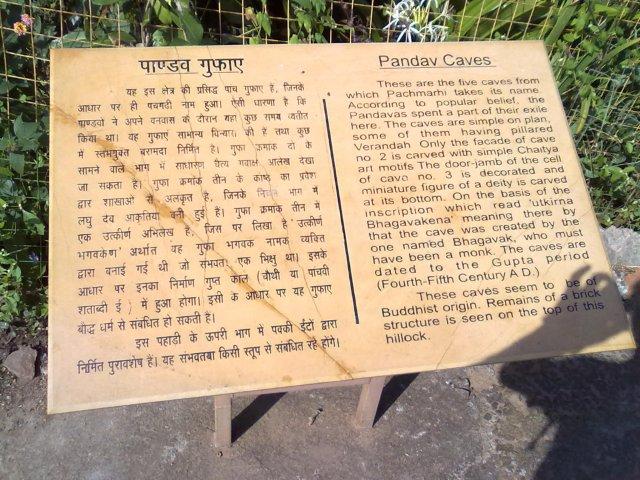 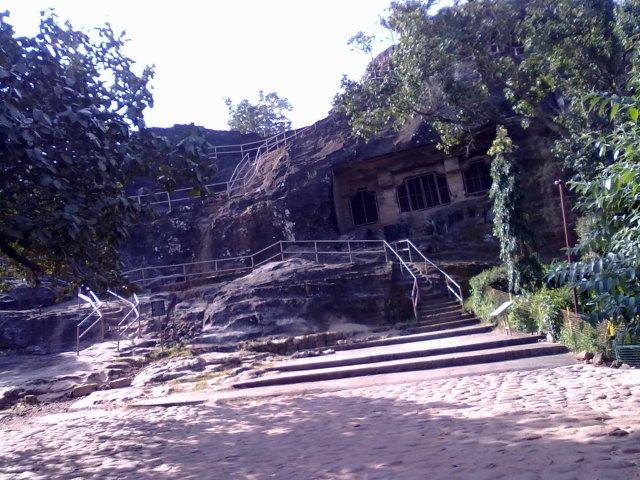 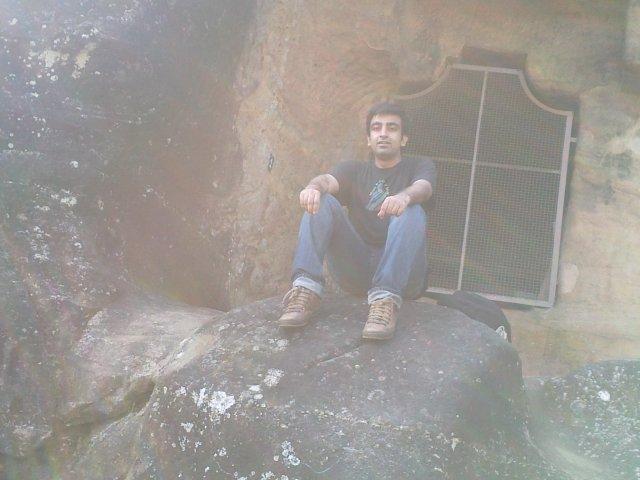 Me sitting on a rock at Pandav Caves

On the top of the cave one can find brick structures which might be a Buddhist Stupa. 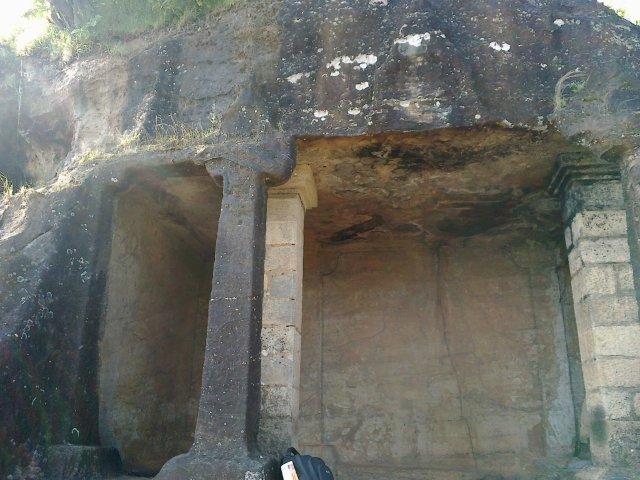 There were also some paintings in these caves but were hardly visibly washed away by the passage of centuries.

Our next destination was Rajat Prapat or Silver Fall which was slated to be the next point in our escapade.

We started walking towards Rajat prapat from the Pandav Caves site.We came near the forest entry from where everybody has to stroll down the jungle with prohibition on vehicle entry thereon. 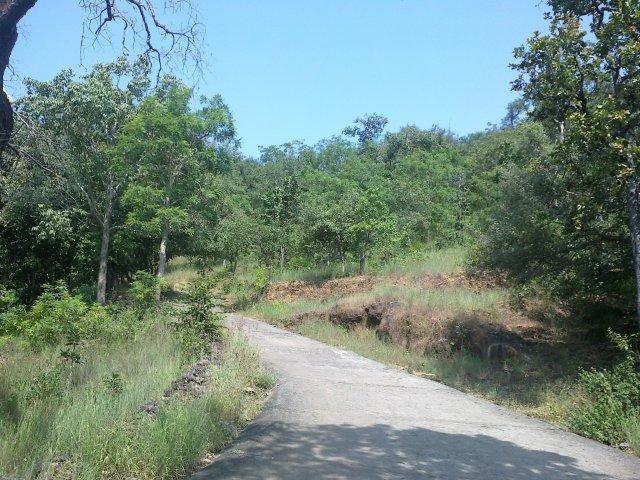 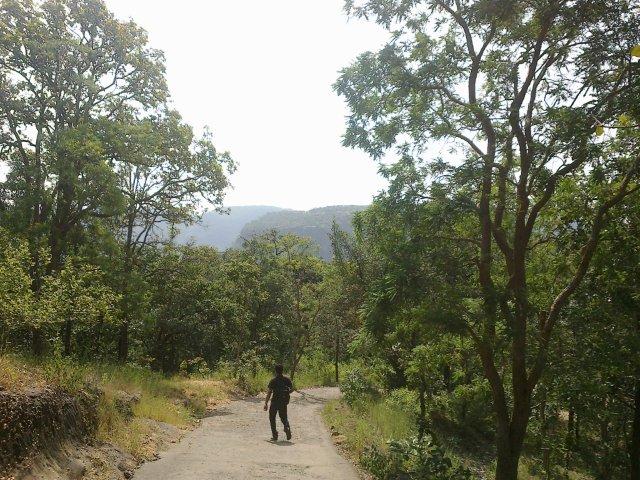 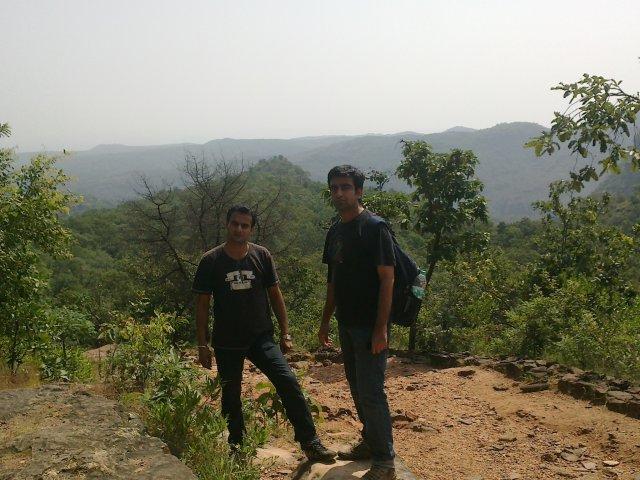 We were sitting at the forest entry to sip a cup of tea and this tribal man named Shanoo came towards us saying “guide chahiye kya saab, neeche raasta kharab hai”

Waiting at the Forest Entry at a small dhaba nested within the hills.This place is very deserted and only inundated by tourist inflow . He decided to wait until we consume our snacks .I was initially apprehensive because he was not even carrying his pass or Identity card . We ordered some maggie and pakoras at this local dhaba ,waiting, we were hearing from the owner of the dhaba ,a young boy barely in his mid twenties ,saying “aage paani nahin milega,paani le lo” i.e.., purchase water from here as you will not get it during the trek towards the waterfalls which emerges after a long jungle walk. Hearing this we got our supplies correct by placing an additional bottle in my pouch. Many tourists shunned him saying “hum jharne ka paani pe lenge” thus sharing such jocular pleasantries. Till then we both reconciled to take Shanoo along to avert any more complications during the passage in the jungle.

Pachmarhi is covered with Sal trees with a thick vegetation down the gorges and along the meadows. Shanoo talked a lot about the Sal trees and its utility . Sal is very useful in the treatment of many chronic diseases. He was talking about the vegetation and culture of Pachmarhi dating back to the times when Gond Aadivasi ruled this place till the advent of the British.

It was a thick jungle , realising it was a wise decision to take a guide along.Moving forward in less than a kilometer from this signboard was the mighty Rajat Prapat view.This is truly a nature’s marvel dripping down from a height of 350 feet from the cliff. The fall is not a stream but a horsetail waterfall with a single drop flowing from the above. Excitedly, i was rushing towards the fences to catch its ambient sound scape created by water which kept gushing downwards. The waterfall is known as Rajat Prapat or Silver Falls because the sunshine on the stream makes it look like a silver strip from a distance.The same can be viewed from the picture posted below. Rajat is the hindi name for silver. 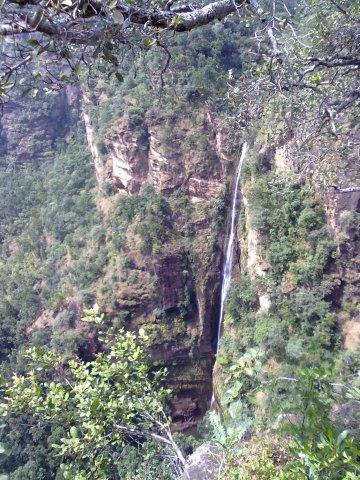 Next we moved towards Apsara Vihar or Apsara falls which is a kilometer away from Silver Falls. It is said that during the British dominion the white females used to take bath in the pool area of the fall .The white complexion of these females made the tribals believe them to be angels coming from heaven to take bath. One trivia – – – – – Kareena Kapoor and Sharukh Khan once shot their song “San San Sana na” from the movie “Ashoka” in Apsara Falls as per the account given by Shanoo. 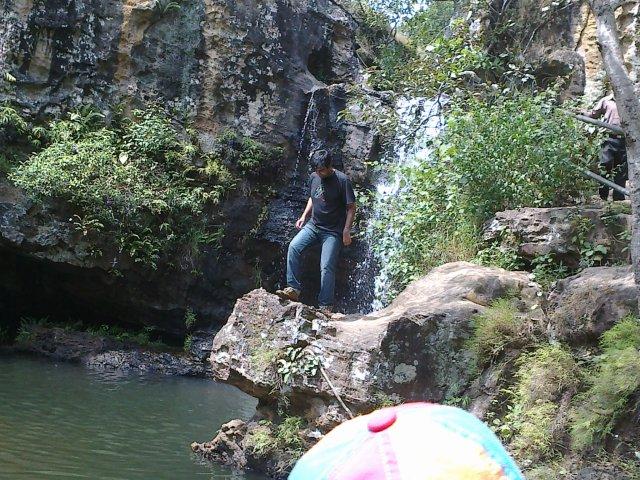 Apsara Falls and its pond area 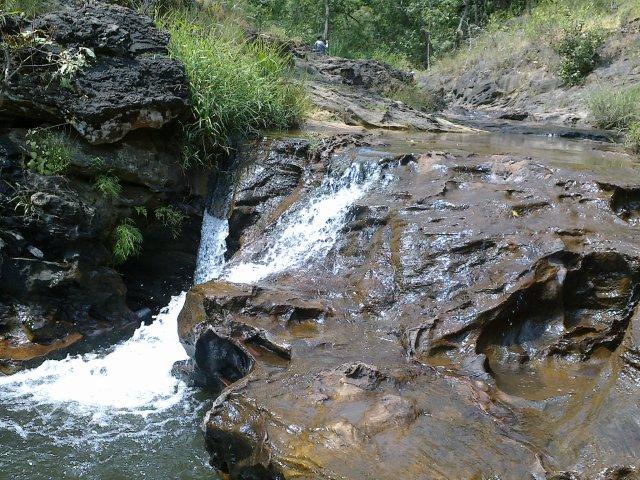 Adjacent to the Apsara Falls is the “Panchali Kund” a cascading waterfall with 5 big rocks over which the water is descending downwards. 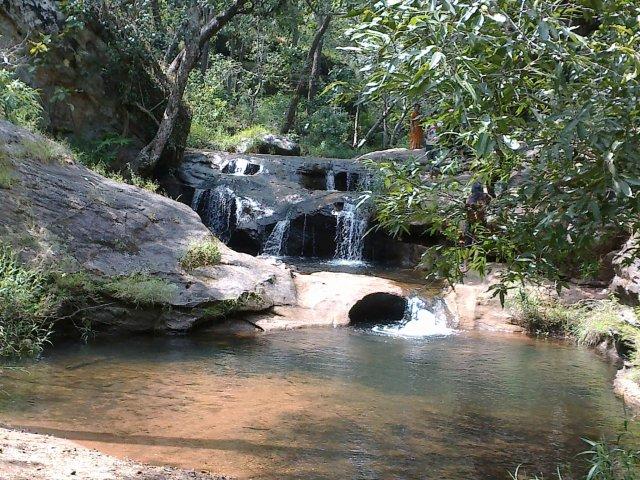 The serene ambiance of the landscape is such that one can attain instant solitude . I was leaning over every cavity of the fall and the water body to get a glimpse of any scenic image. The tourists started to move towards the forest entry while we thought of an adventurous escapade through the thick woods of the dense forests to catch “Rock Paintings” which date back many centuries … probably pre historic times. Disagreeably we gave our consent to Shanoo who was supposedly very excited to show us the ancient relic which is well placed in the womb of the forest.

We started to move with herds of tourists getting sparse until it disappeared completely. 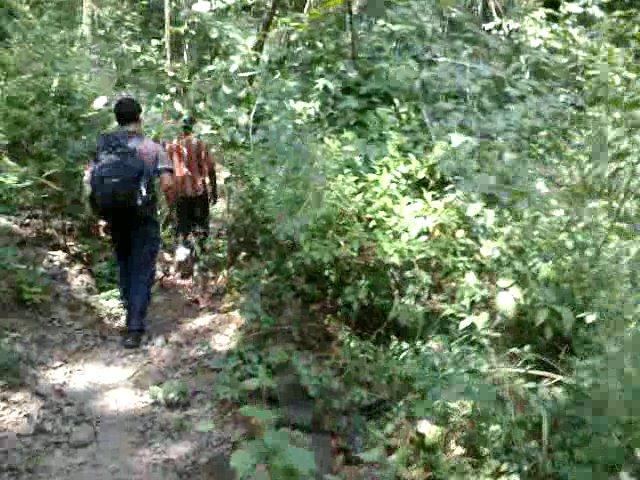 Moving in the woods where no one ventures .On the way towards Rock Paintings

We came across a dead snake-skin apparently of a big venomous serpent … and to my surprise i was able to locate a Bison’s skull lying away from the “pagdandi”(walking path) . The forest has a wide range of wild life including a both herbivores and carnivores like deer,black buck,Bengal Tiger,Leopard ,Wild Dogs (known as Son Kutte in vernacular language) ,Wild Boar,Bison etc….. 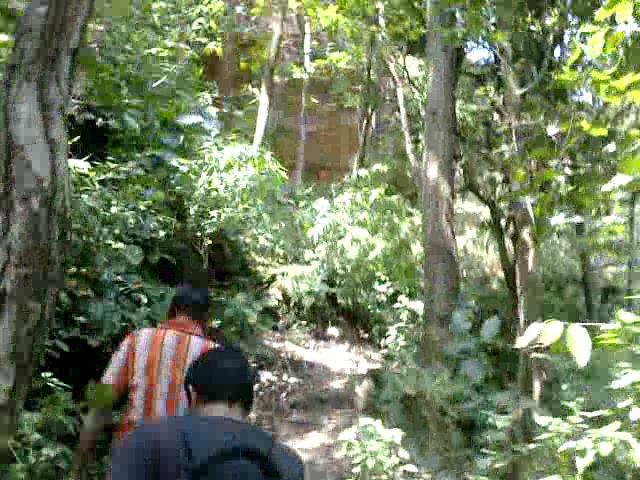 Climbing up as Roack Paintings are seen above

We were expecting wild intervention any time in the course of our movement into the deep gorge. It was a topsy-turvy ride with points where we were clinging to branches of the trees growing over the cliffs . With two halts in the midway and a profuse precipitation we were approaching the rock paintings . The rock paintings of this region belong to pre historic periods. The ancient paintings clearly depict a society of hunters and gatherers. Mainly they portray man and his relationship with animals. The region was occupied by the Korku and Gond tribes who perform various customary rituals in front of these rock-cut monuments to please their ancestors by giving animal sacrifices and offerings. Also to avert any unforeseen misery or danger these customs were performed. These rock paintings clearly depict the rudiments of an art which would eventually flourish into a discipline in the near future,less was known by our pre historic caveman while creating this raw form of story telling.

Shanoo took a stick in his hand and was pointing towards the pictures trying to tell the significance of this art. He was looking like a chieftain of a tribe standing on the altar to give some offerings to their gods.

We rested there for a while to move again towards the woods .Shanoo had an alternative path walking through the dense jungle to reach the Forest Entry gate . Shanoo arranged for our conveyance and we reached the town within 20 minutes. 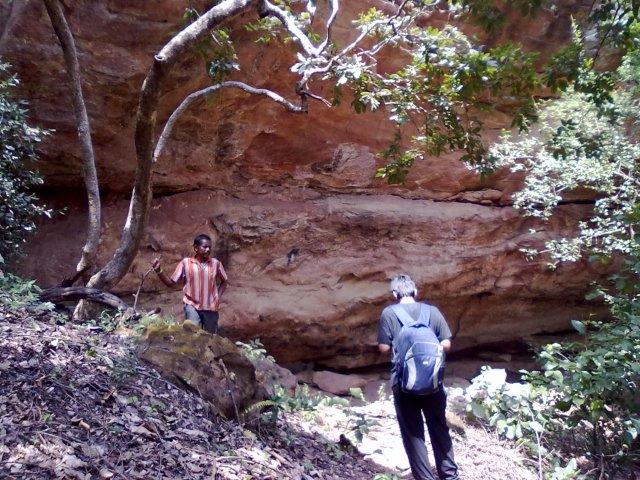 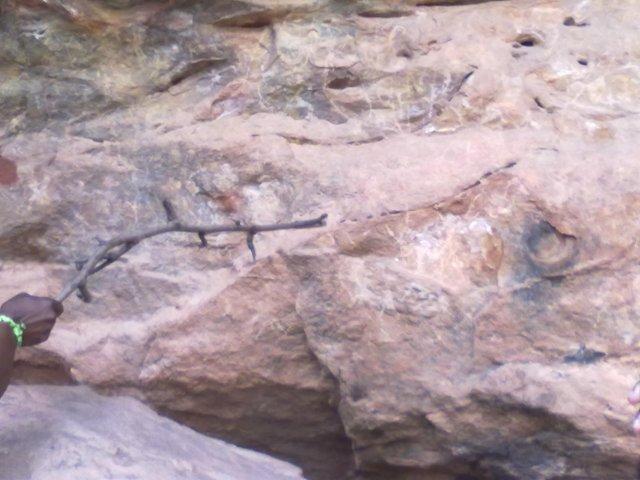 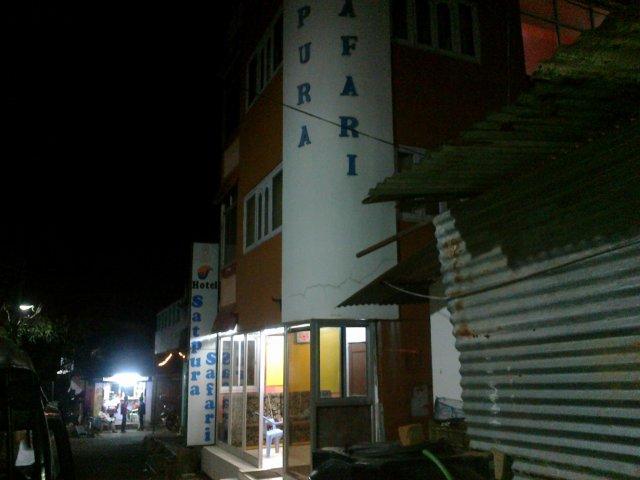 Tired with fatigued we booked a room in the hotel “Satpura Safari”.

We rested there in our room for a while then ventured out in the town at the time of evening.

It was Vijay Dashmi that day and the whole city was buzzing with the festive season. 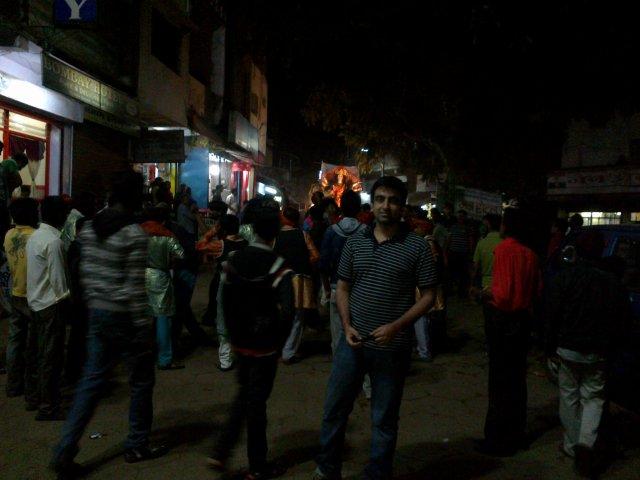 We set out in the streets where we could see processions moving with Goddess Durga’s idols singing and dancing over the streets.People getting involved in the customary ritual of burning the effigy of Ravana as an emblem of victory of Truth over Evil . 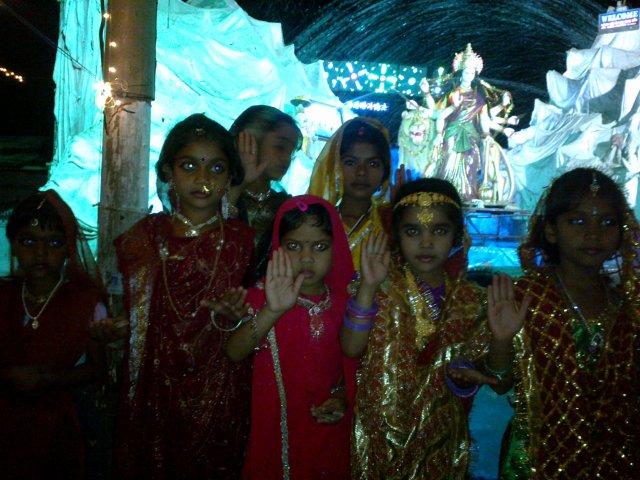 It was a treat to see the energy of the locals and their amicable behavior towards the tourists. With such a big procession moving through the city no signs of derangement was visible. It was quite conspicuous that people had devotion and festivity in their minds unlike what we see in big cities.

Little pretty girls dressed up like Goddess Durga , in their charismatic aura , posing for pictures ,calling each other by names of the goddesses ,with sheer innocence . This girl in the red dress proclaimed that she is goddess Sita. She truly is, i believe. 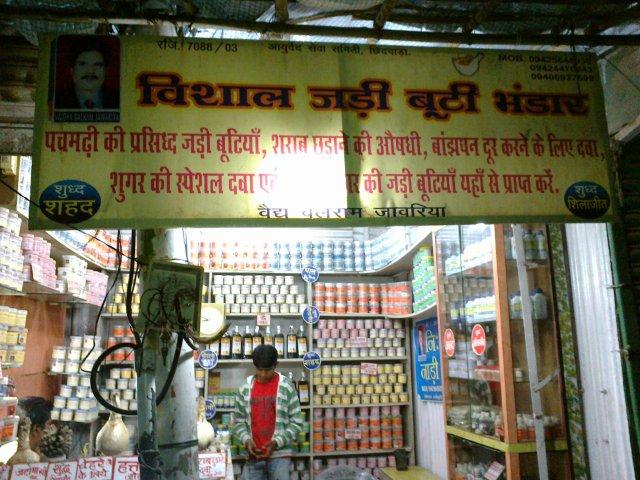 We ventured out in the market to find a 30 kilogram onion used for medicinal purpose of healing certain ailments— couldn’t believe my eyes but we happened to see it at an Ayurvedic shop.

It was 10.30 pm till then so, we moved to our hotel room ,fatigued with day one of the excursion. 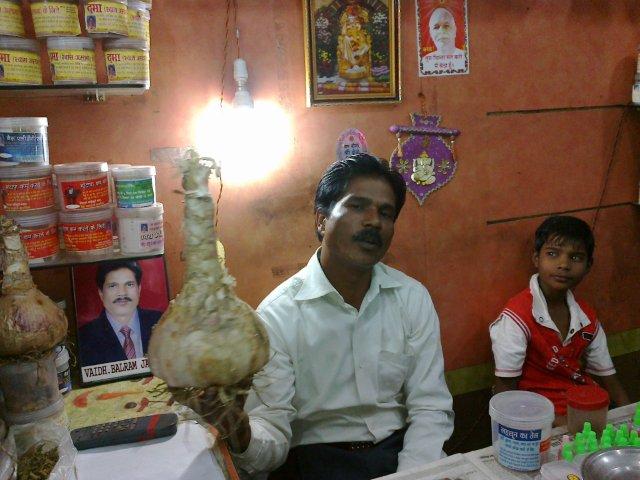 The owner of the shop carrying the 3 kilogram onion

For the rest, watch out for the next part which will be coming soon.