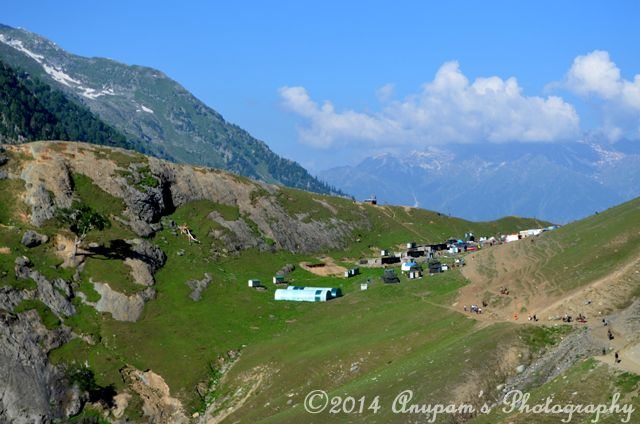 After carrying to a distance of 3kms from Chandanwari and to an altitude of 11500 ft, we were taken down from the horseback at Pishutop. The toughest climb was now over. The faith in us became stronger and the path did not look scary. The devotees might have pleased Lord Shiva to shower his blessings with a bright and clear day. Pishu Top (or Pishu Ghati) is believed to be the site where the Rakshasas (demons) were crushed by the gods. In Hindu mythological stories, Rakshasas were used to appear every now and then, at each and every place, to through challenges to the Devas (Gods), but to get defeated by the Gods, at every time in the end. I was wondering to know of such a fight hereto. However, it reminds the victory of righteousness over evil.

“Jai Bhole Ki! Chai Pi-Lo Bhole! Nasta Le-Lo Bhole!” were the calls from the Bhandaras (Langars). These Bhandaras provide tea, snacks, breakfast and hot vegetarian foods to the pilgrims, free. They camp at all major places on the way to the Holy Cave to serve hot foods to the pilgrims. A holly attempt, I must say, may be the path, to their belief, to receive grace and blessings of Lord Shiva. The holy songs of Lord Shiva in the tunes of most modern bollywood songs were playing in these Bhandaras and were lifting up the spirits of pilgrims. 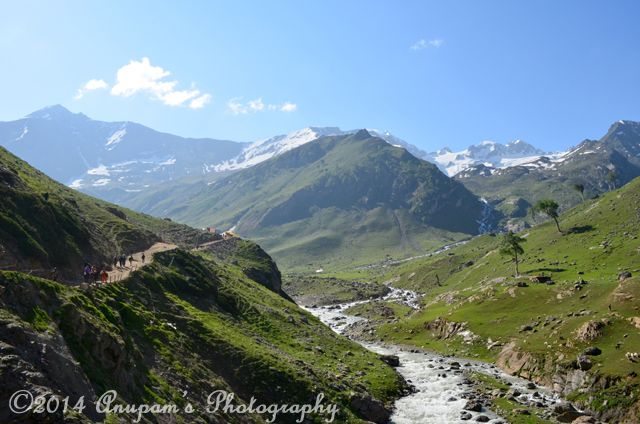 The road ahead along the East Liddar River

Inscription on the way to Zajipal

As we were moving ahead, I saw posts of Indian Army at almost every kilometre or two, guarding the pilgrims against all probable odds, clearing all obstructions and ensuring the Yatra to proceed peacefully. 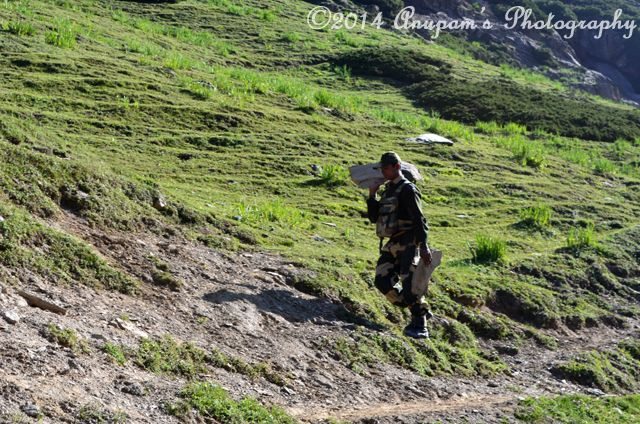 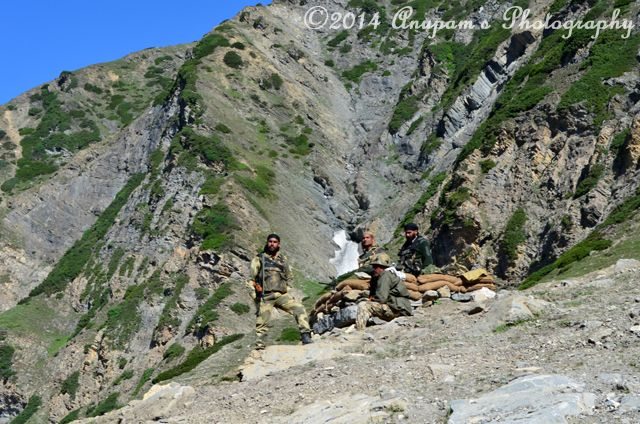 I was experiencing the King’s ride and by now getting a bit more used to horse riding, correct would be to say sitting on the horseback, and the journey became encouraging. I thought, if I had the opportunity to go back into past, I would have raced the horses up and down all the way like a King! But alas! I was only being carried on its back. Before I was overpowered by such intermingled thoughts, the enchanting beauty of the mountainous terrain was unfolding before my eyes at every turn and it took only few minutes’ horse riding to reach Zajipal (Zajibal). 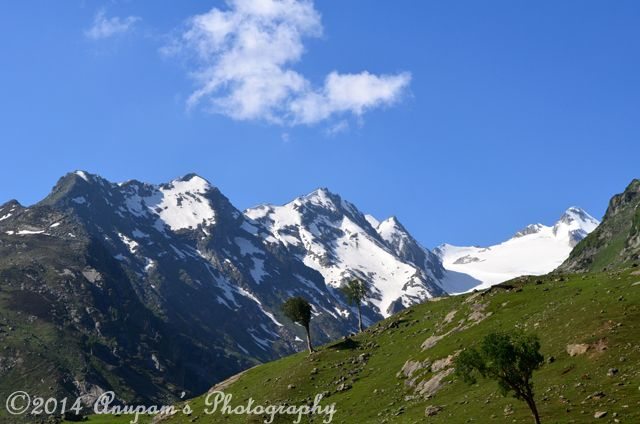 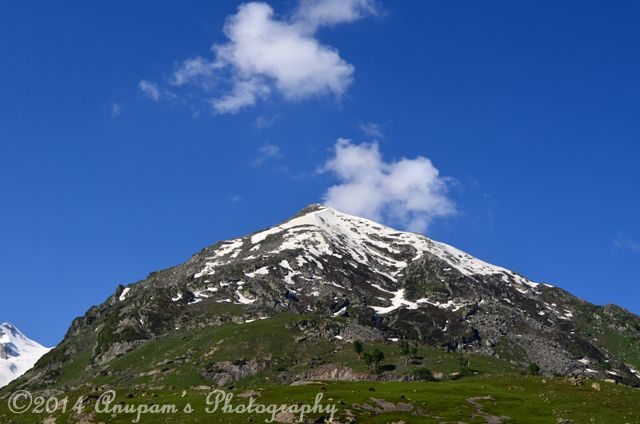 The Peak just before Zajipal 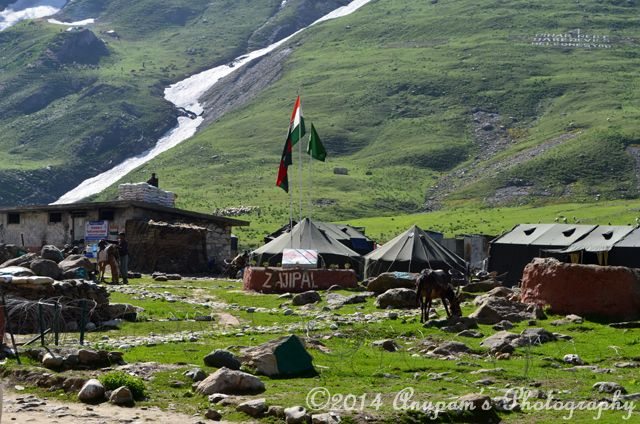 Once more we were taken down from the horseback. From Zajipal, pilgrims were required to go on foot to reach Nagakoti and the horses had a different route through which they went with their masters. “Jai Bhole”, a Sadhu attracted my attention, I too said “Jai Bhole ki”. He was hopping with a song on Lord Shiva. It was playing in a Bhandara nearby and he gripped into it. He knew no schedule, no urgency, but only paying obeisance to the Lord Shiva by taking his name for countless time, singing holy songs and dancing with it, might be all the way to the Holy Cave. But we had to go, wanted to cover maximum distance possible, and under all favourable circumstances to reach the cave by tomorrow. 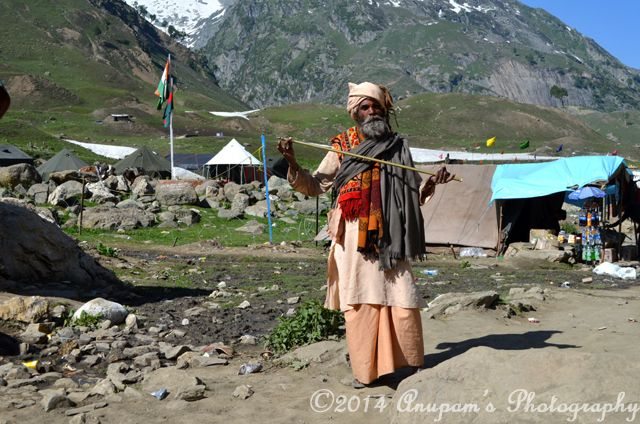 We set off on the trail quickly, a board was fixed along the road indicating slippery road ahead. But it was a dry rocky road, and we did not find hard walking on that. As we moved ahead the trail took a turn with a little decent and then the ascent began. 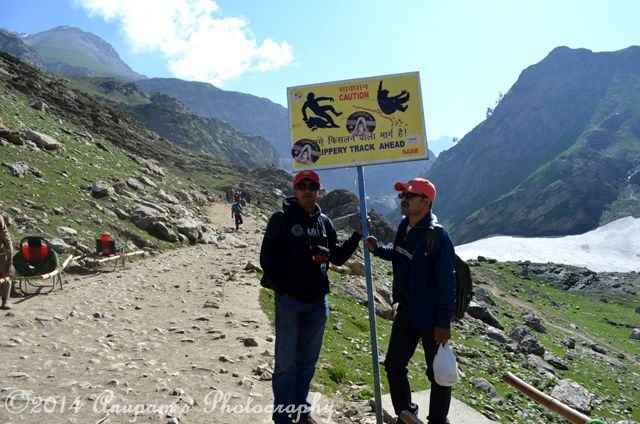 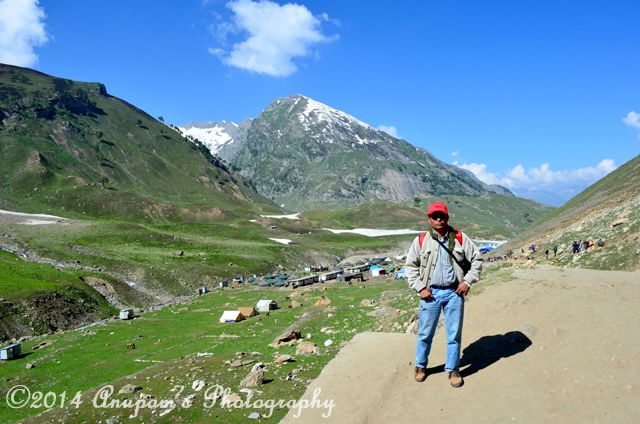 Me on the way to Nagakoti 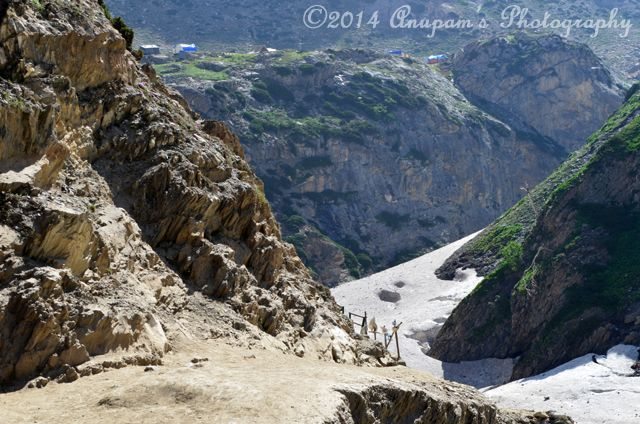 We met an Army Jawan there, a gentleman from Himachal, fully dedicated to his duty. He was the one man Army of his post. We took a little guidance from him and set off again. 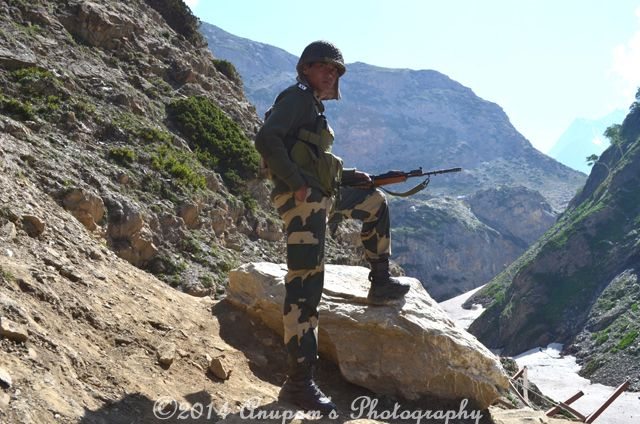 Soon we reached under a waterfall, it was splendid, another one at the top was visible from there, over that a wooden bridge was made to cross over. We climbed up there and saw the last stretch of hike. It was then a walk of few minutes and we reached at Nagakoti. 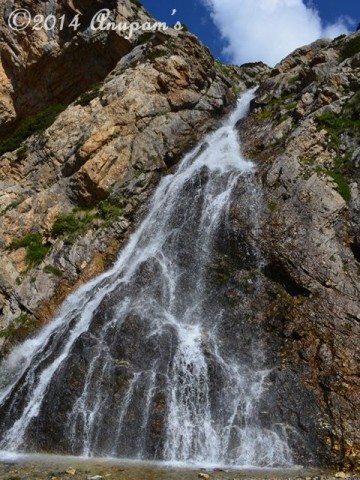 Waterfall on the way 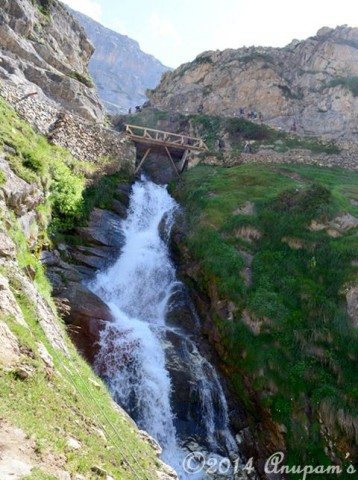 Wooden Bridge at the top to crossover 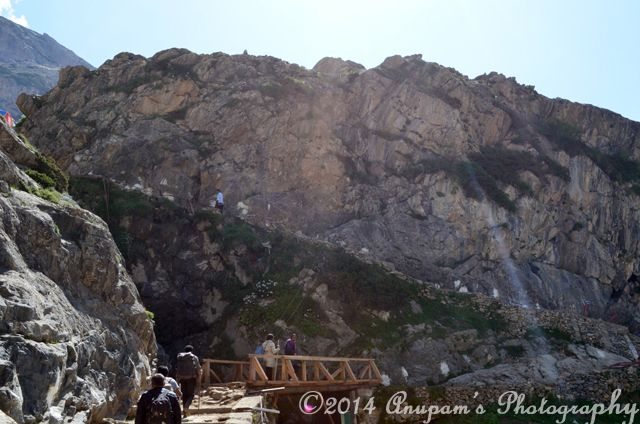 The Last Hike to Nagakoti

Each step of the journey was much a delight to the heart, mind and soul, and every step brought us closer to our faith, belief and conviction. “Sa-ba, Baitho” said the horsemen, we did so and started our journey on the horse back again. We were now only 3kms away from the next major spot ‘Sheshnag’.

Journey to the Holy Cave continues…………

I put on my eye gear, tied my hair tightly and let Ellis attach me to his harness. We were waiting for our pilot to sign us when we would reach the 12,000 ft mark and as he waived a Thumps up….Oh F***, we have to jump now….NOWWWW!!!!!!….we crawled our way to the entrance of the plane, I could see the Palm Jumeira view and he said Jump….I bent my knees, jus couldn’t think anything and I jumped….we both jumped together, the freefall was amazing, the cool air dashing my face. Was I flying?? Have I reached heaven???? Is this really happening??? Am I a bird???? Wait wait wait….I was so shocked by the whole experience, so stunned by the beautiful views of Atlantis and Palm Jumeira and the lovely infinite blue and green ocean…..its just like a different world….Mind blowing !!!!!