We awoke early in the morning and checked out from the Coconut Country resort.  We proceeded to a place called Appannapalli, which is famous for its Bala Balaji shrine. Contrary to one’s expectations, this temple is of recent origin, having been built in 1991. The place itself is very ancient and was known as Arpanaphali, which means the fruit of sacrifice.  According to mythology, in order to sanctify this site, Vynateya, a son of the sage Kashyapa, diverted the waters of the Godavari river so as to make them flow past this village. This river was named Vynateya  in his honour. In course of time, Arpanaphali came to be known as Appannapalli. 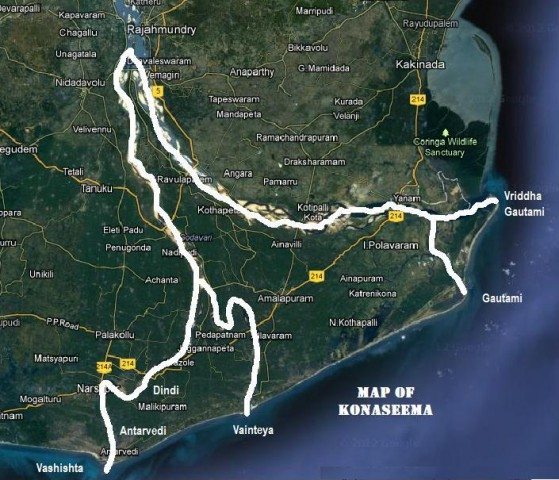 A map of Konaseema showing the main distributaries of the Godavari. According to ancient traditions, there are seven branches, each named after one of the seven sages known as Saptarishis

The Bala Balaji temple is a standing testimony to the devotion and perseverance of a humble coconut vendor  called Ramaswami. Every year, he used to visit Tirupati and place a share of his annual income at the feet of Lord Venkateswara as his offering. In 1966, the priests there refused to place the offerings at the feet of the idol and understandably, Ramaswamy was upset thinking that the rejection was by the Lord himself.

The temple is built in traditional Dravidian style and does not look like a temple which came into existence hardly a couple of decades ago. What makes it captivating, however, are the multitude of figures adorning the shikhara of the temple depicting important events in Hindu mythology, such as the Bhagavatam, the Ramayana and the Mahabharata. 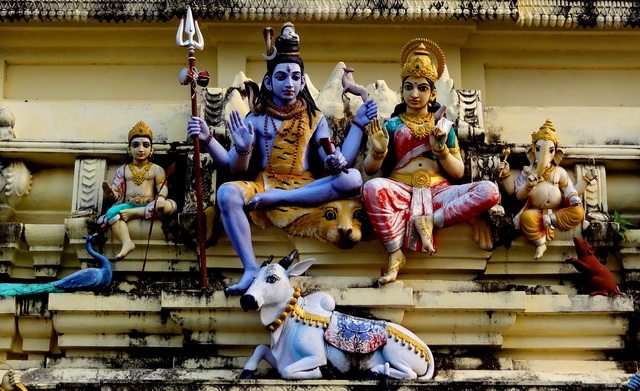 The Divine Couple flanked by their sons Kartikeya and Ganesh 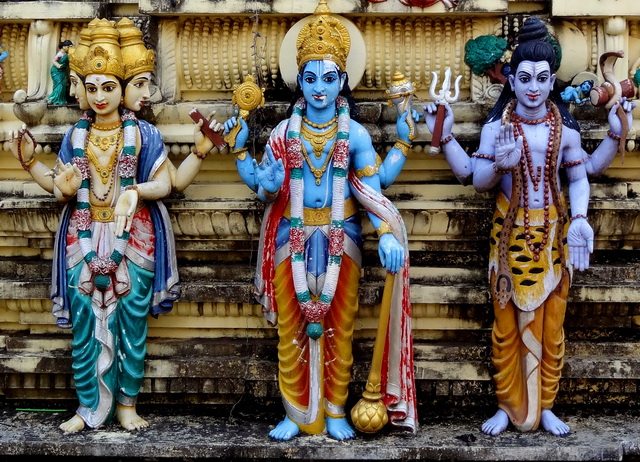 The Triumvirate of Brahma, Vishnu and Maheshwara 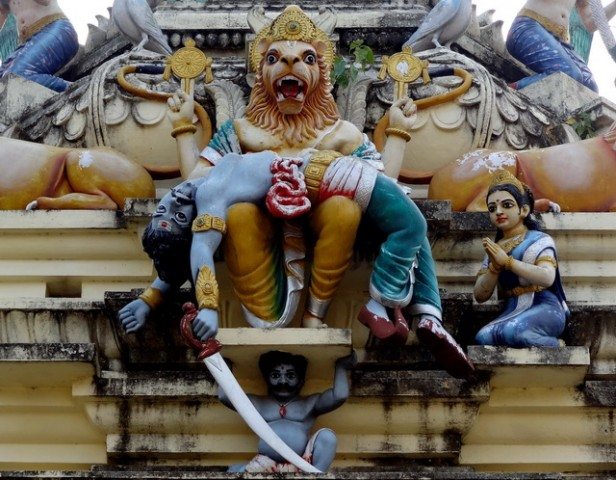 The Narasimha Avatar of Lord Vishnu

In addition to the images on the Shikara of the temple, there are also a couple of tableaux; one of Lord Krishna delivering the Gitopadesha to Arjuna and one of Lord Vishnu reclining on the serpent Adisesha with Bhoodevi and Sridevi, Brahma sitting on a lotus that emanates from Vishnu’s navel with Narada, Garuda and Tamburu, the horse-faced Gandharva in attendance. 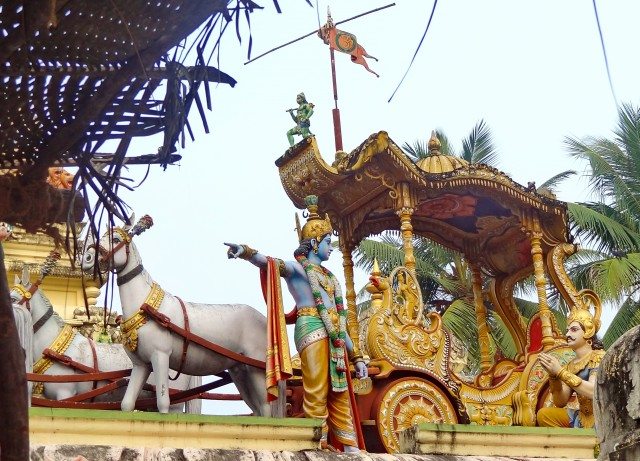 The beauty of this temple is that one just does not go to pray or meditate. One can take one’s children and grandchildren, show them the sculptures, tell them the mythologies connected with them. This will inculcate a desire to know more about our glorious heritage and when children ask questions which we cannot answer, we are forced to revisit those epics and clear their doubts. 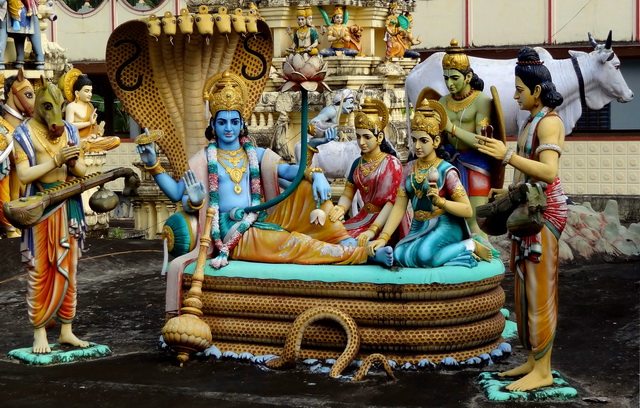 Lord Vishnu with his consorts and divine attendants

I have to confess that the other place I visited on this day is not exactly a temple as the title seems to suggest. It is actually a 2,300 year old Buddhist monastery. It is probably the oldest standing structure in all Konaseema. Located on the right bank of Vynateya, in a nondescript village called Adurru, it was built by Princess Sanghamitra, the daughter of the Mauryan Emperor Ashoka in the 3rd century BCE.  Sanghamitra and her brother, Prince Mahinda were the missionaries who carried the message of the Buddha to Sri Lanka.

The ancient 2,300 year old ruins of a Buddhist monastery in Adurru

Finding the way to Adurru is tough ask. Other than haphazardly located tiny signposts by the ASI, there is no guidance available for tourists. The streets are very narrow and some of them are just about wide enough for an autorickshaw at the most. After a number of false turns, we ultimately found the site. There is no approach road and I drove over a clayey path on the river bank in which my vehicle’s wheels could easily have got stuck into. 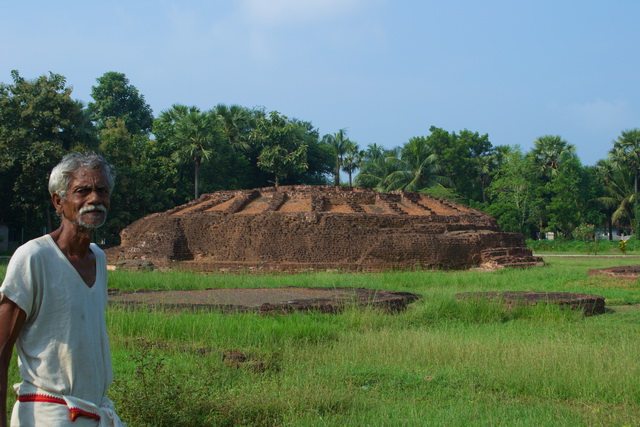 The knowledgeable senior citizen who guided us around

I found the whole area fenced off by a compound wall and the main gates were rusted and would not budge. I looked around but saw no guard or attendant in sight. While I was wondering about what to do next, a senior citizen, slightly hard of hearing, came to my rescue. He told me that he was sure that we had come to see this site when he saw our car entering his village. 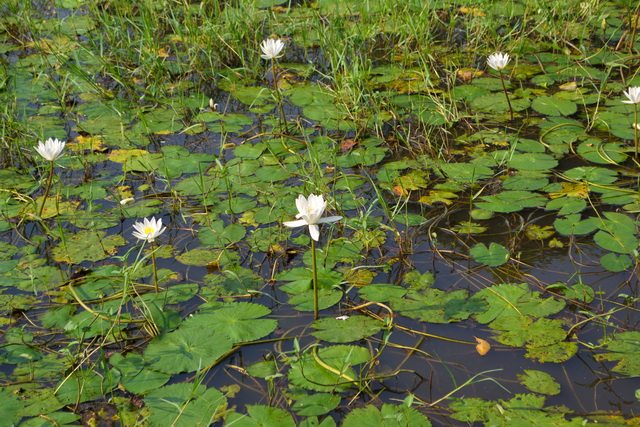 Some beautiful lotuses in a shallow pond near the stupa

He led us to a place where the grille on the compound wall was cut and asked us to squeeze ourselves through this aperture. We had no other choice but to comply even though, legally speaking, it was trespassing into a site under the protection of ASI. 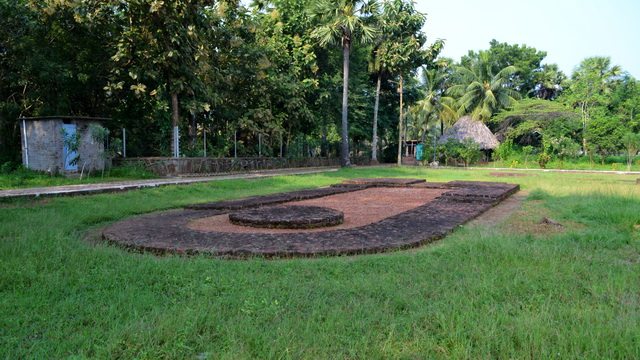 The remnants of an apsidal chaitya in Adurru

Looks like the ASI took good care of the site in the initial years, but, with funds drying up, they seem to have lost interest. If probably marketed and better infrastructure is provided, it is sure to attract tourists from Sri Lanka, Myanmar and South East Asia. The site was an important centre where Buddhist monks and nuns were trained before they were sent abroad to preach their faith.  Adurru was a good springboard for them as they could board ships here which could then sail to their destination via the Bay of Bengal which was just a few kilometres downstream. Foreigners too must have come here for studying  more about Buddhism in the land of the Buddha.

We inquired about the way to Vizag and they told us that since the bridge across the Vainateya was still under construction, the only way to cross the river was by sailing on a barge. We drove a few kilometres and reached the boarding point for the ferry. 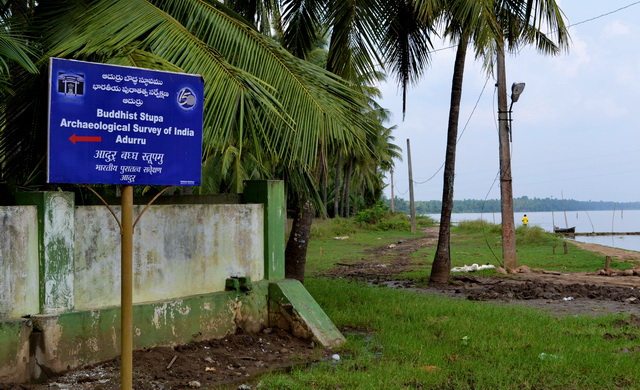 After a 15 minute wait, the barge arrived ferrying people, motorbikes and autorickshaws from the left bank. After the passengers and the vehicles disembarked, we were asked to board. The charge was just Rs.100 for the car and its occupants, which was quite a bargain. 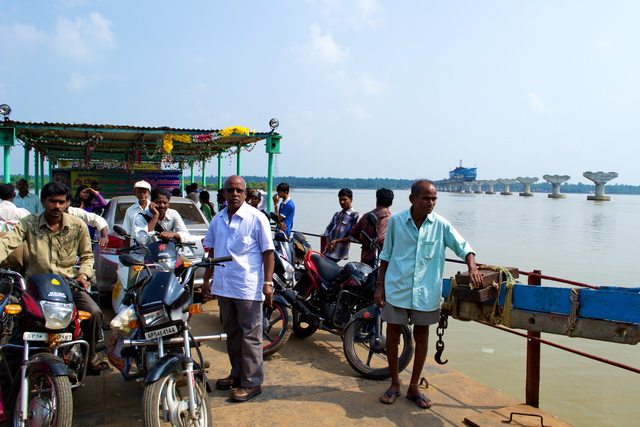 The barge which ferried us to the other bank. The unfinished bridge can be seen in the background.

The drive from the left bank was smooth all the way as the road (NH-214) was good and the traffic was not as dense as it normally is. There was another bridge to cross, this time across the Gautami, which forms the northern border of Konaseema. Immediately after crossing this bridge, we pass by the tiny former French enclave called Yanam, which is politically a part of the Union Territory of Pondicherry, even though it is bang in the middle of coastal Andhra.

The gateway to Yanam with a golden statue of Mrs. Indira Gandhi welcoming visitors

The short 2 day trip to this pastoral paradise was over. There was still so much to see, so much more to experience. We shall return, we promised ourselves. Hopefully soon.

read it somewhere on a board “Darling I want you but not so fast” so we gripped our nerves & maintained a decent pace. As we started early & wanted to enjoy this particular stretch (Sarchu – Leh) of our ride to the maximum, we took frequent small breaks, enjoyed that heavenly feeling, and experienced the scent in the whistling air. We literally lived those moments, discussing about our bikes, tough terrains & beautiful valleys around.